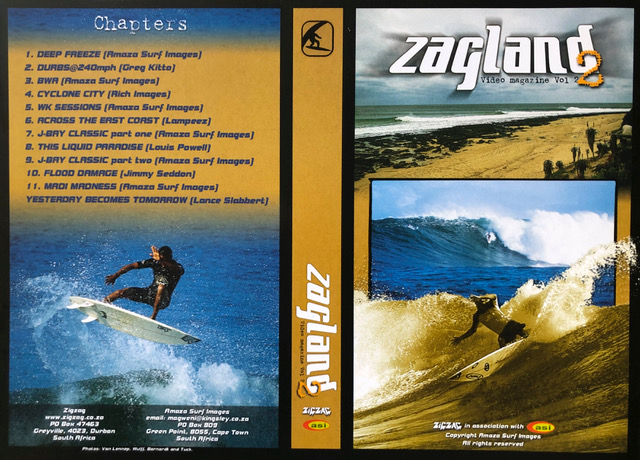 “In Zagland 2 we got young videographers to submit clips from their locals that we put together for a broad view of SA surfing.” Says Amaza’s videographer Neil Webster. “Plus we did a Zag trip to Madagascar, which was off the charts.”

Neil breaks it down:

“Part 1 is a mixed bag from the Cape.
Part 2 is some East Coast and town fun from called durbs@240mph, by Greg Kitto and Colin van Dongen.
Part 3 is a highlight of the Red Bull BWA 2000, which was won by Sean Holmes.
Part 4 is Cyclone City by Rich Hambloch and features cracking Durban and Coast waves from years back.
Part 5 features Chris Ward and Koby Abberton ripping up cranking J-Bay and maybe the first air at Supers in solid surf?
Part 6 Lampeez takes us across the east coast delivers cracker surf from Slumtown and surrounds.
Part 7 is a J-Bay shackfest with the locals sharing some waves with the rest of SA crew.
Part 8 is a segment called “This liquid paradise” by Louis Powell.
Part 9 is another J-Bay segment with SA crew going tilt and Bruce Gold cruising.
Part 10 is called “Flood Damage” by Jimmy Seddon
Part 11 is the previously billed “Madi Madness”
And there’s a bonus section called Kaleidoscope productions which is a super trippy clip by Lance Slabbert, I think.”