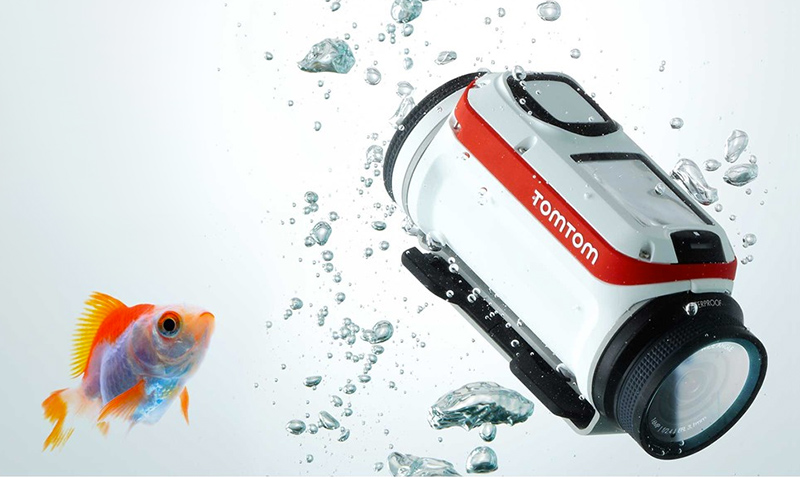 TomTom, those guys famous for their epic GPS gear, have released their new Bandit Action Camera onto the market and it’s no slouch. We sent the Zag videographer to the Billabong SA Junior Champs to test-drive it. This is what he had to say (read the full technical review further down): 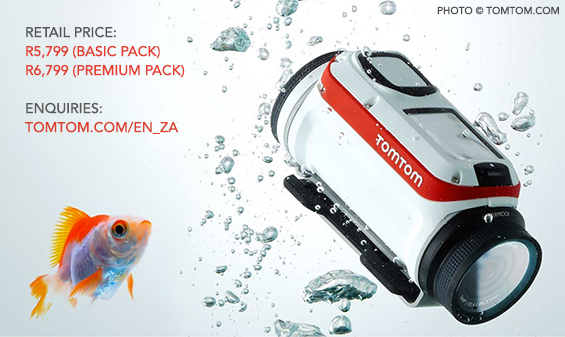 It’s day three of the 2015 Billabong SA Junior Champs in Jeffreys Bay. The waves are slightly smaller but conditions are super clean and the sun is out, making it the best time to test out the TomTom Bandit.

Although better known for their GPS sat-nav systems, TomTom’s new venture – the Bandit Action Camera – didn’t fail to impress. Having worked with many other compact waterproof cameras over the years, it was exciting to paddle out at clean Lower Point with some of the country’s best groms, ready to test this bad boy.

With my wetsuit zipped up and booties vas on my feet, I proudly stepped out onto the balcony of the media house where the event’s official camera crew were sitting. My brightly packaged camera (it comes with a bright orange floatation device) quickly became the topic of conversation. That lasted for about two minutes. Then Alan van Gysen stepped out, armed to the teeth with a 200mm lens, contained in an even brighter yellow water housing. 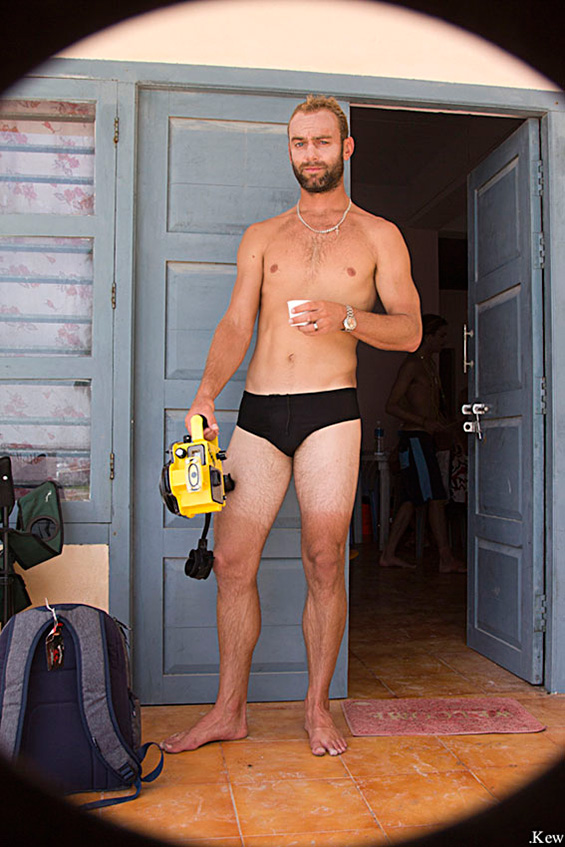 AVG and his bright yellow housing, on assignment.

His perfect posture and debonair smile didn’t help things, shadowing Tom and I momentarily…until I casually asked if his toy captured video in 4K? I could have sworn I saw the boys give me a glint of acknowledgement as I headed for the stairs. I didn’t turn to look, but I can only imagine a look of envy as Tom and I strutted toward the sea.

In terms of the camera’s ergonomics, the Bandit is more elongated, resembling a miniature version of your classic handy-cam. This doesn’t affect usability all that much, but it may help some shooters to keep the surfer/subject in frame due to the more directional feel the longer shape seems to provide. The exterior has a large, easy to read LCD, which makes it simple to view and scroll between menu settings. There’s also a separate four way control panel and stop button on top, while the back of the camera features a highlight button which you can tag your clips with as you shoot – which makes finding the best parts of the footage super easy in post. Alternatively, you can cut out the task of post/editing all together with the TomTom’s unique “shake to edit” feature (see more on this in the review below).

In terms of the technical aspects it’s got a lot of juice for its size. As mentioned before it can shoot up to 4K resolution at 15 frames per second (fps), which is perfect for time-lapses. It also shoots at an impressive 2.7K (larger than full HD) at 30 fps, as well as at 1080p (Full HD) at 30/60fps. If you’re looking for super slow-motion, the Bandit is capable of shooting 720p (HD) at 120fps. All of this makes it competitive with other action cams on the market. There’s a separate slow-mo setting on the camera too, which saves time in post by filming in 60fps and automatically compressing the frames so that the footage is already slowed down when you view it on your laptop or device.

Specs and technical details aside, after exporting the footage onto my laptop (which is done simply by twisting off the back of the camera and plugging in the built-in USB), the quality of the footage was great. Take a look at the video below to see for yourself.

THE NUTS AND BOLTS:
The TomTom Bandit Action Camera has entered the market late in the game after patiently observing competitors and their upgrades of popular action cams. But instead of being left out the race, this has allowed TomTom to box clever and make a unique action cam.

At first the build of the camera seems a bit weird, as one reviewer noted. Instead of a square, the Bandit is a cylindrical shape but it soon becomes apparent that this has been designed with functionality in mind. The camera is sturdy and compact with no connecting wires, which is a plus – all you have to do is twist the back of the camera off and the inside of the camera doubles up as a USB stick, allowing for quick and easy charging and transferring. 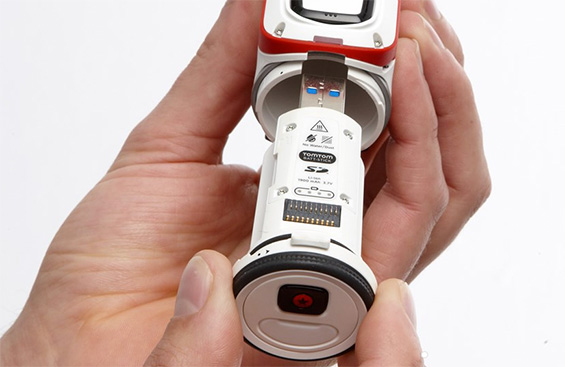 Simply twist off the back and plug it into your computer.

The Bandit has a decent size LCD screen that allows easy navigation through all it’s functions and settings, which is clear to read and understand with big icons. They’ve kept it simple, and it works.

If you are familiar with TomTom’s GPS watches you will enjoy the fact that have kept the menu very similar. If you aren’t familiar, you will pick it up instantly. The best thing about these controls is that they are nicely spaced out, which prevents you from unintentionally hitting the wrong button when using it in the surf. If you are in the unfortunate circumstance of surfing in freezing water temperatures and need to wear gloves, the bigger buttons enable you to still operate the camera with ease, which is also great if you’re into other sports that involve gloves.

A simple yet effective feature of the Bandit is that is has separate buttons to start recording and stop recording. No hitting the record button, only to find out later you didn’t hit it hard enough and ended up recording the intervals instead of the action.

The camera is not bulky and doesn’t need a waterproof housing, which keeps it slim in the water if you are brave enough to trust the camera mount. Otherwise you will need to attach the Floating Protection Cover, which immediately makes the camera quite bulky.

With the floating cover attached, the TomTom Bandit can look a little bulky.

It’s important to note that the camera is only waterproof when the special waterproof lens is attached, which is named the IPX8 lens cap. This enables the camera to be waterproof up to 50m.
The one gripe about the Bandit is that you have to purchase this lens separately or buy the Premium Pack bundle, which includes all kinds of the mounts that you probably won’t use for surfing at all.

THE BOTTOM LINE:
Enough options to choose the correct mode to shoot whatever your purpose – whether it be shooting a selfie sequence in a massive keg or filming your mates surfing up close and personal in slow mo, the quality is great. Speaking of quality, the video is smooth and crisp which makes the footage incredible. The mount connector is also super easy and quick to use. All you have to do is push the camera down on the mount and make sure it clicks in and it’s safe as houses. To dismount it is as simple as squeezing either side to release the camera from it’s mount. Because you have to squeeze both sides it eradicates the possibly of anything else bumping it loose by mistake. There are also adapters for mounts that might already be in place on your surfboard or accessories.

The Premium Pack offers many mounting options, plus the important waterproof lens cap.

TomTom has also incorporated their GPS technology into the Bandit. The Bandit tags your footage with your location when importing, and it’s up to you if you want to share this or not when posting videos. There are also sensors that record altitude, speed, G-Force and acceleration. It’s awesome to see your speed on the bottom left of the screen, speedometer style, when playing back the video. The Bandit can also connect to TomTom’s heart rate monitor (which is waterproof) and allows you to see your heart rate on the clips and tag footage when your heart rate increases/spikes – like that big drop, that moment before the beating you get handed, or that tube you successfully navigated. If you don’t have the heart rate monitor, don’t stress – you can also do it via remote control, which comes with the Premium Package.

All the above is cool, but the real kicker is the TomTom Bandit App. TomTom have created an app that is so easy to use it brings a whole other dimension to owning an action cam. The app allows you to edit and share your footage on the spot. All you do is connect your phone to the camera via WiFi and your clips will be available to edit, which is simply done by shaking your phone. You can use all the footage from your session, or select the clips you want, or use the automatically tagged moments. Then you just select a song from your phone, shake, and voila! The app stitches it together and you have an edit. You can edit it further before posting if you like but all the hard work is done for you. 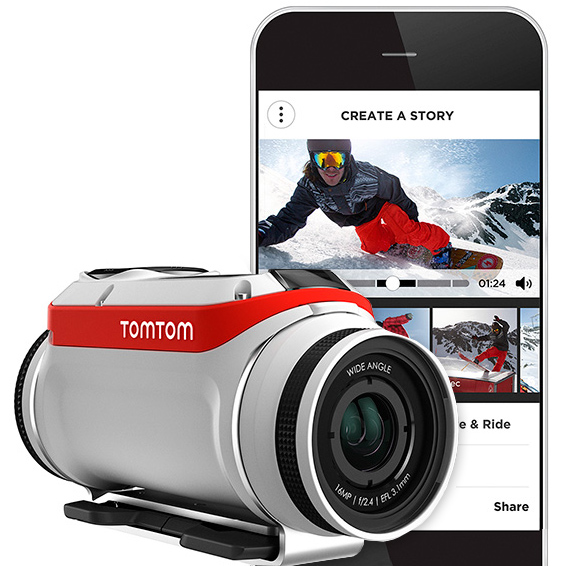 The TomTom Bandit App allows you to edit your clips on your smartphone.

The TomTom Bandit Action Cam retails for R5799 which is the basic pack that includes basic flat and curved adhesive disc mounts and a GoPro mount adapter (for if you already have GoPro mounts installed in your board).

ABOUT THE ZAG REVIEW:
The Zag Review is an independent editorial feature on surfing hard goods, ranging the full spectrum from boards and wetsuits to tide watches and travel bags. None of the reviews are paid for by advertisers or part of an advertising deal, and we retain the right to give honest, critical feedback that is in the interest of our readers. The product is reviewed by Zag staff and everyday surfers who rip, not pros who are paid to endorse the goods. We test the gear for a minimum period of two weeks (and a month for boards) to give you comprehensive feedback for the surfing layman. We know that surfboards are not a “one size fits all solution” and different surfers prefer different aspects on a board according to how they surf, even if they are the same weight and height. In the case of surfboard reviews, we’ve made sure to seek feedback from at least three different surfers to get well-rounded input.

Contact us here if there is a particular product you’d like to see reviewed and we will do our best to make it happen.