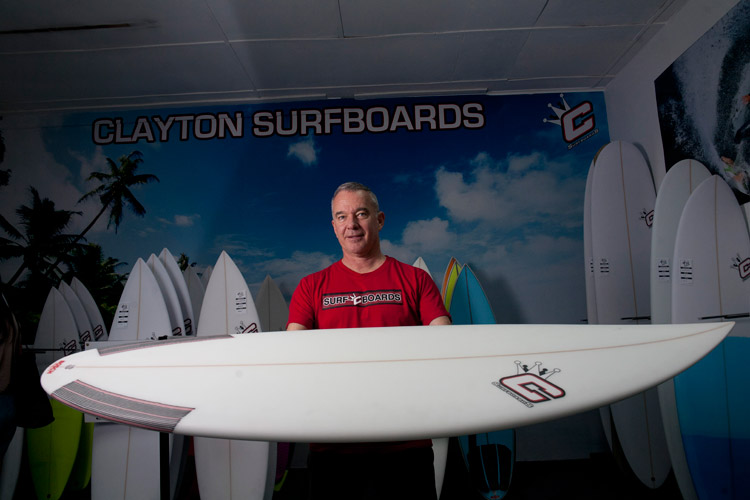 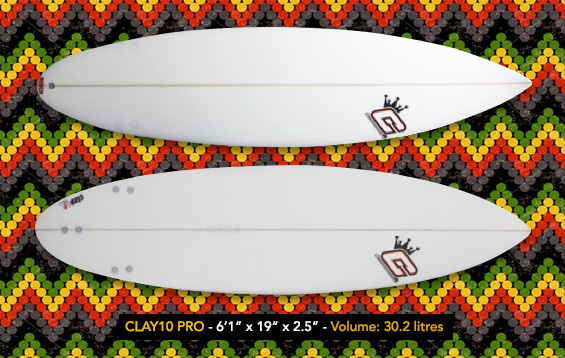 “The Pro is a good-wave board aimed at clean three to six-foot surf,” explains Doug Thomson, Manager and part owner of Clayton Surfboards. “The rounded tail helps the board move from rail to rail effortlessly while still being user friendly in mushy conditions. It’s best ridden at the surfer’s height, has a medium entry rocker and a medium to high tail rocker. It’s got a single concave throughout – this gives it more direction in good surf as well as hold.”

Most of what Doug was saying went in one ear and out the other when we laid eyes upon the beautiful specimen. Beyond all the technicalities and dimensions, there’s something instinctive about choosing a board. Yes, it’s all about custom boards these days, but sometimes you see a board and you just want it… like love at first sight! Those curves are just seductive. 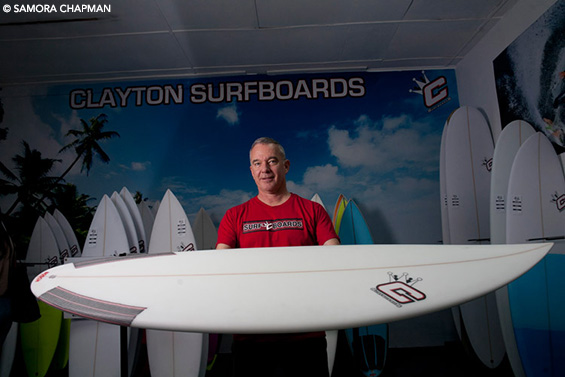 Doug Thomson introduces us to the Clay10 Pro model.

But the proof is in the soup, so the Zag minions took the board out on the town. Initially we discovered that the Pro has a very small sweet spot, so you have to be on top of your game to get the best performance out of it. It actually felt too loose at first, especially if you’re stepping off an ‘old-dog-of-a-plank’.

After a few acclimatising sessions and a knife-like four to six-foot swell – all agreed that the Clay10 Pro is a true shredder in mid-range surf… from Durban beach-breaks to south coast jungle pits. A bigger set of fins helped add some torque to the turns and hold in the folds in more powerful conditions.

The Pro is fast, super responsive and gouges waves like a dirty knife-fighter. The volume of this model is aimed at 70-80kg dudes, but some felt under-gunned when Poseidon turned on the juice. So it’s a good wave board that really belongs in surf up to 6-foot. A bit more length and volume is advised for the bigger days. 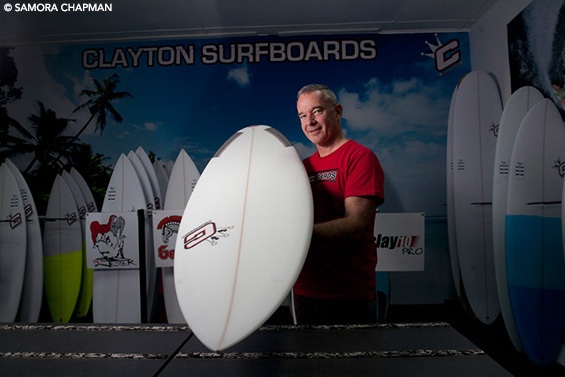 The Clay10 Pro from a different angle.

The beauty of Doug’s philosophy is that the customer’s stoke is top priority. “My objective with each surfer is to fit them with a custom-made surfboard to suit their physical attributes, level of surfing and destination. To make this happen, we have a test ride centre, so you can ride the model you’re interested in and give me feedback. We can then tweak the model accordingly to suit your exact needs. Surfers get committed to the process and feel a part of the design, which increases the stoke!”

For those that have been riding Clayton boards for decades, it’s interesting to know that the founder – wily ripper and surf coach Clayton Nienaber – still plays a key role in the research and development of boards. “Clayton is tuned into the latest trends over in OZ and we work together on the development of shapes,” explains Doug, who bought into Clayton Surfboards four years ago (abandoning a lucrative but painful career as a Chartered Accountant).

“Progression of models is ongoing and new models are introduced annually,” he continues. “Clayton’s involvement is all about new trends, new models and production techniques. We also have a team of young up-and-coming South African surfers (21 in all) who test ride all our new models and provide feedback before we adopt them into the range.” 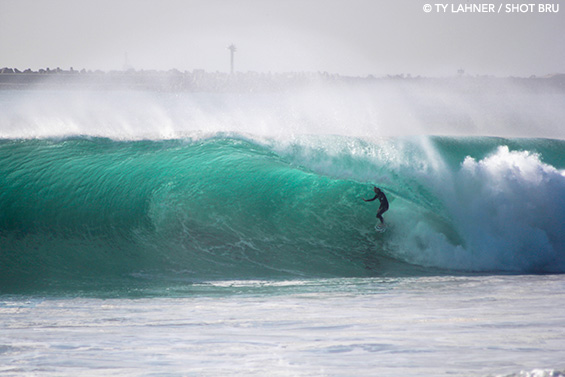 Clayton team rider, Ricky Basnett, knows how to put a surfboard to the test.

Doug comes from a different era to Clayton Nienaber, and for him high performance surfing is not the be all and end all of the sport. He’s been surfing for 50 years. He was SA University Champ in 1980 and he’s learnt the art of surfboard making from legends like Derek Girven, Els, Rod MacDonald, Robin Fletcher-Evans, Vaughn Makkink and (of course) Clayton Nienaber to name a few. Doug has been instrumental in adding single fins, fishes, mini mals, evos, long boards and experimental boards to the Clayton quiver.

“I’ve got my own shaping bay at home. It’s a place where I can just be at peace and be creative. The best part of my job is designing, cutting, shaping and test riding new models,” he says. Doug is also into painting and making music, so his passionate and creative spirit is really a driving force behind the company. 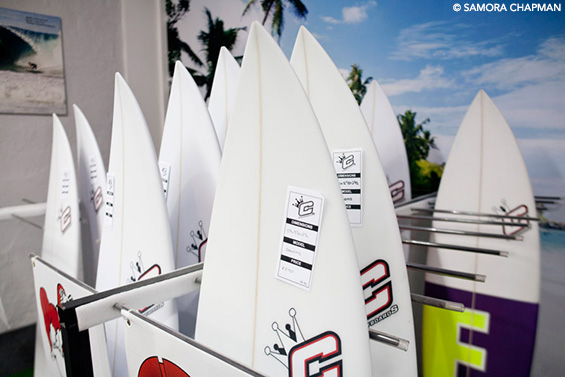 So many choices; there’s a board for your every need at Clayton’s factory.

“I’ve been surfing since I was eight and it’s always been a guide for me. If I’m sick or unhappy or stressed… the ocean sorts me out. I used to drive to work in my BMW as if I was driving to my death. I realized that I needed to make surfing central to my life. So I made this big change in my life, I joined the surf industry…and it’s been amazing.”

THE VERDICT: The Clay10 Pro model performed well in the conditions it was designed for – clean three to six-foot surf. While it still managed to hold its line in slightly larger surf, the need for more volume became apparent after a couple of late drops. It also didn’t go so great in mushy waves, where a fish or a retro shape would have been better. But as a part of your quiver that you’re going to want to pull out in most good conditions we experience day to day, it’s an excellent addition.

ABOUT THE ZAG REVIEW:
The Zag Review is an independent editorial feature on surfing hard goods, ranging the full spectrum from boards and wetsuits to tide watches and travel bags. None of the reviews are paid for by advertisers or part of an advertising deal, and we retain the right to give honest, critical feedback that is in the interest of our readers. The product is reviewed by Zag staff and everyday surfers who rip, not pros who are paid to endorse the goods. We test the gear for a minimum period of two weeks (and a month for boards) to give you comprehensive feedback for the surfing layman. We know that surfboards are not a “one size fits all solution” and different surfers prefer different aspects on a board according to how they surf, even if they are the same weight and height. In the case of surfboard reviews, we’ve made sure to seek feedback from at least three different surfers to get well-rounded input.

Contact us here if there is a particular product you’d like to see reviewed and we will do our best to make it happen.