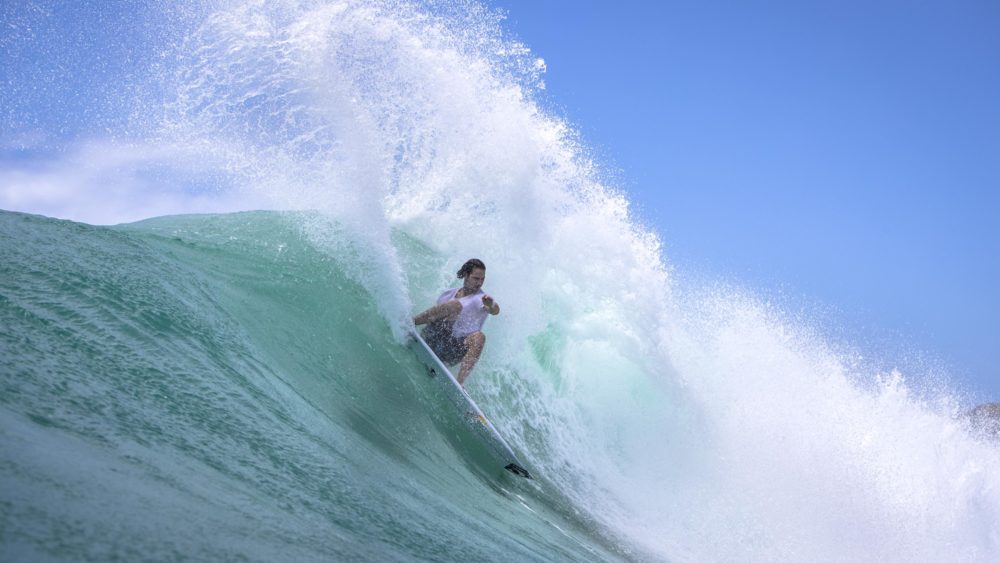 End-of-year is a crazy time for most people. Work functions, family gatherings, Christmas plans etc. It can also be a bitter sweet time for many depending on how the year went, how the following year is shaping up or not, and what the festive season means to you. For me personally it is a time of extreme gratitude and faithfulness. Gratitude for the year past with all the blessed provision – a now complete picture in the rearview, and faithfulness for the year to come with so much uncertainty – an empty canvas ahead. As a freelancer you just don’t know what lies around the corner in the new year – one can easily worry, but you can and should stop to appreciate the year past, see the goodness and opportunities given, and know that with a bit of faith, trust and acknowledgment, your paths will be directed.

Looking back at 2019 the year was a great mix of Southern Africa and international adventures – Mozambique for Stabs ’The Electric Acid Surfboard’ Test with Stephanie Gilmore, Zambia for Stabs ‘Go Easy on The Zambezi’ with Michael February, Harry Bryant and Dylan Graves, Mozambique again to chase Cyclone Idai, Namibia for a documentary we’re working on to be released in January and South Africa for Stabs ‘Stab in the Dark – All-Stars’ with Mick Fanning, Dane Reynolds and Jordy Smith. And then a few exciting international trips in-between – West Java for Roark’s 2020 northern hemisphere summer range and Portugal for the WSL Peniche event with some terrifyingly heavy slab free surfing on the side. A sincere word of thanks to all those involved in these trips/projects, and to all the publications like Zigzag who supported us in publishing content in 2019 – I am extremely grateful.  A special word of thanks to my family for the ongoing support and understanding, and most importantly to God for His guidance and provision. I literally would be nowhere without it. 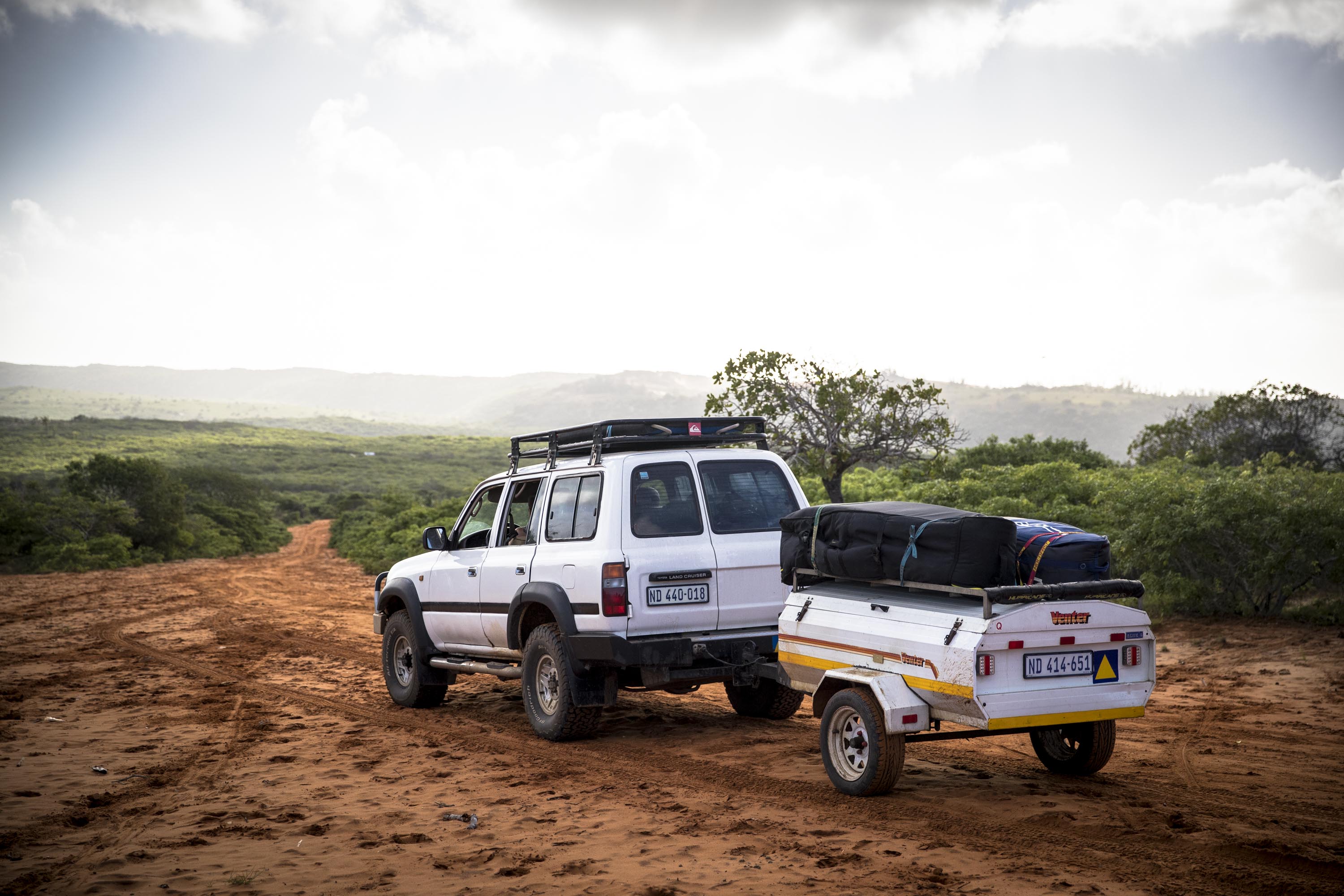 1. “The journey is the destination” aside; to get anywhere in Africa you need reliable equipment and even more so reliable contacts. I don’t think about Mozambique without thinking of Ryan Ribbink and his Bink Tours. 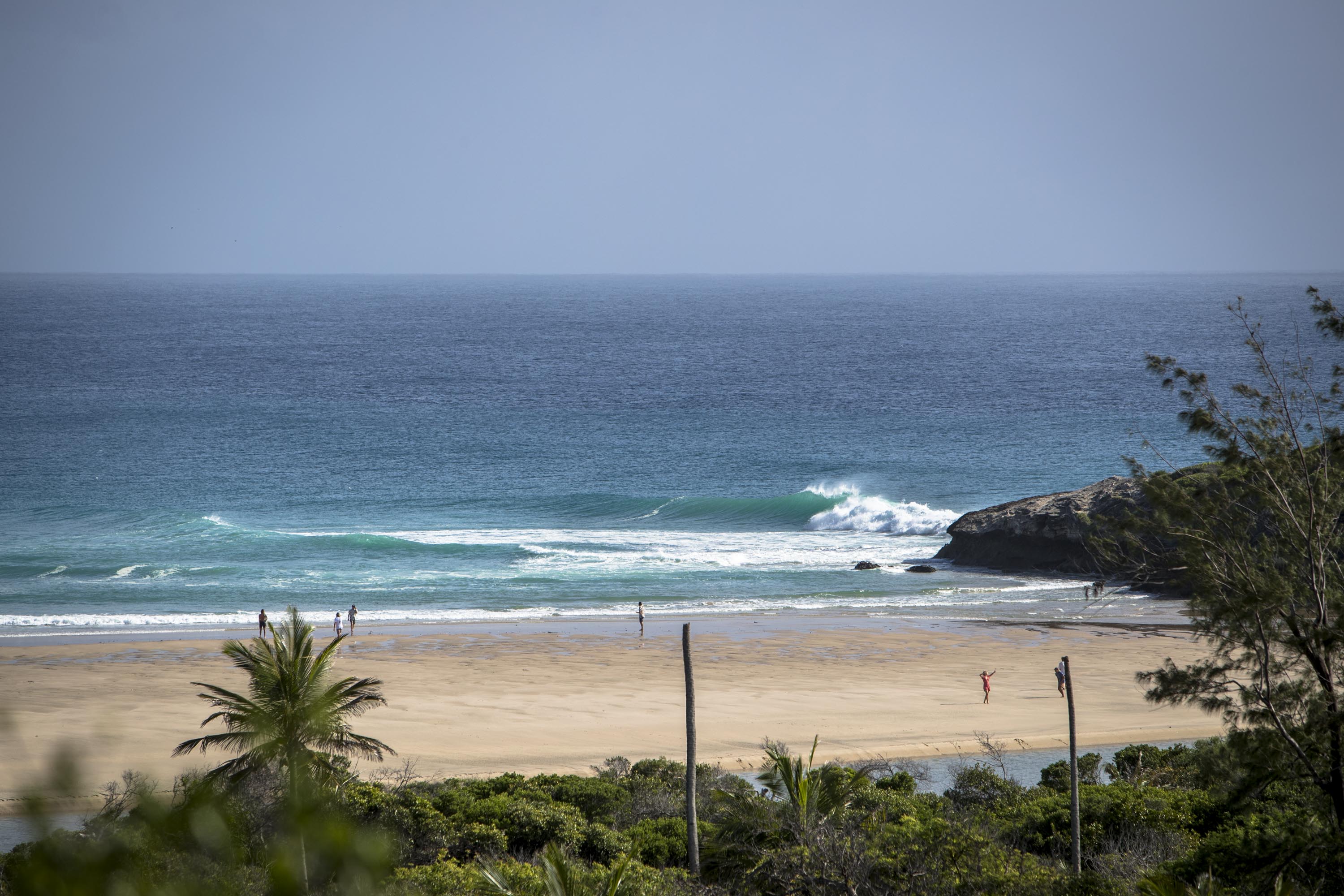 2. After two days of driving this kind of view at the end of the road washes away all the sweat and grim. Low tide and no one out! 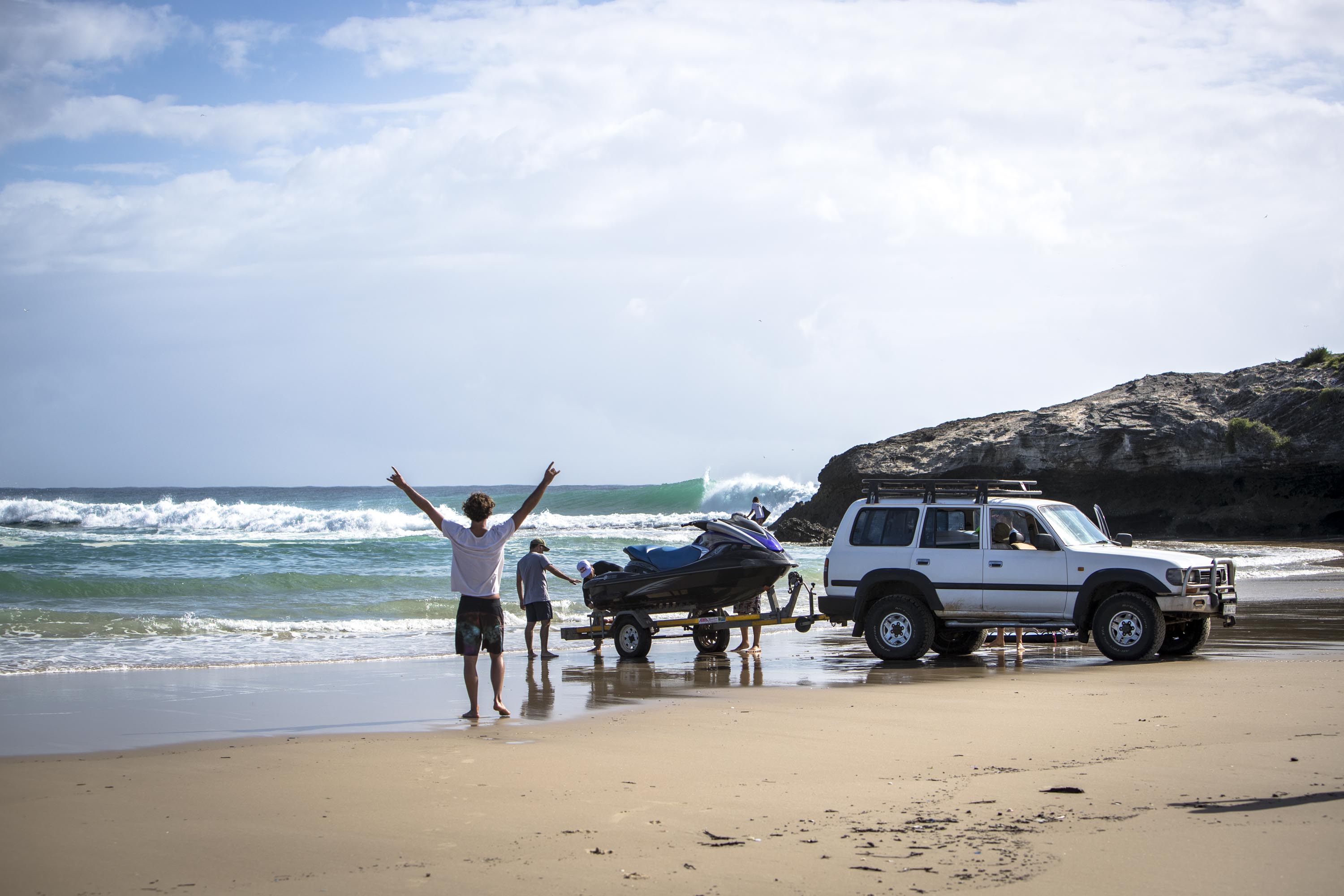 3. Jordy Smith revelling in a well-timed strike mission without the worry of a contest horn, judges, jerseys and points. Just surfing for the reason we all surf – for fun and the therapy it yields. 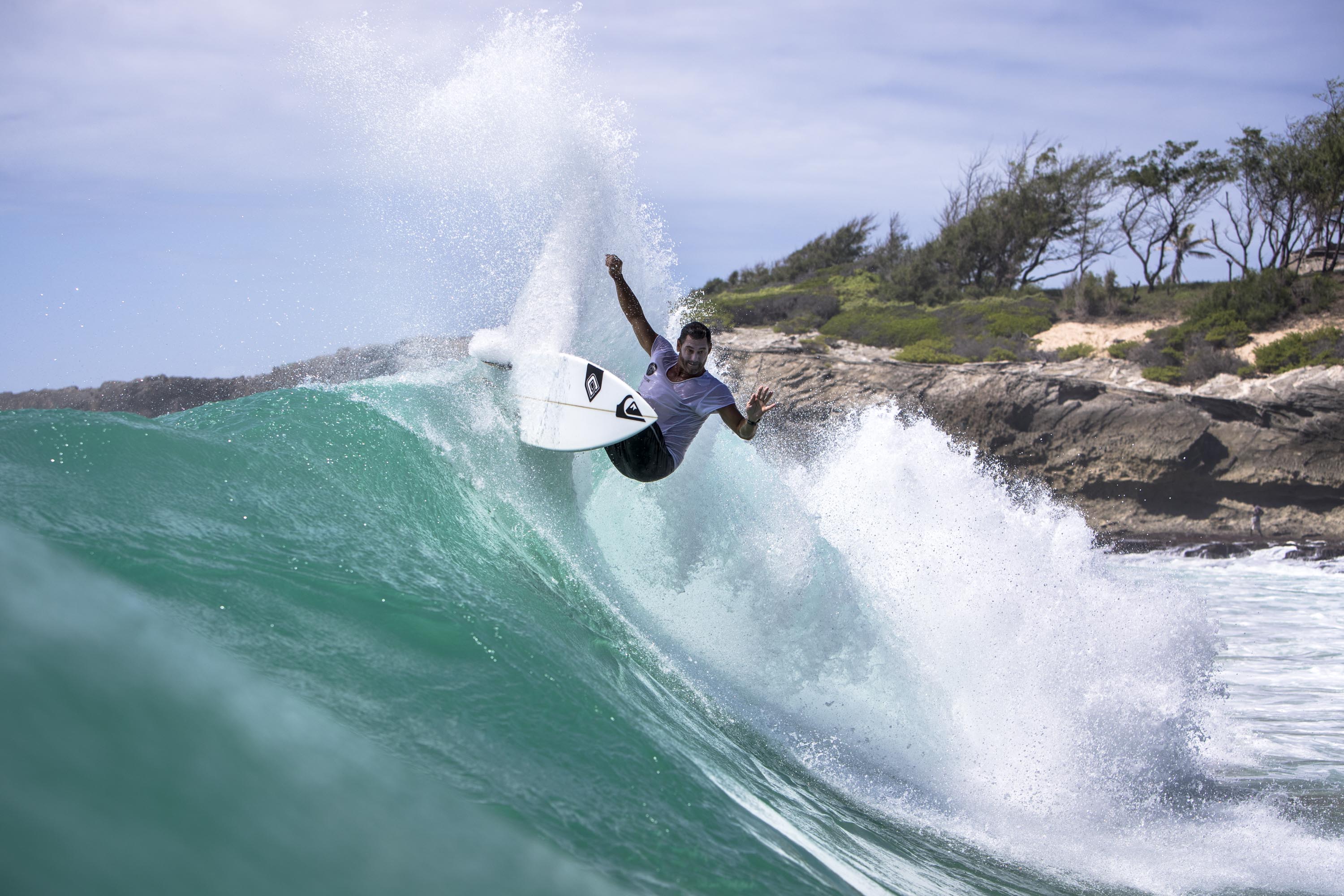 4. Ryan ‘Bink’ Ribbink showing the “guests” how it’s done north of the border. 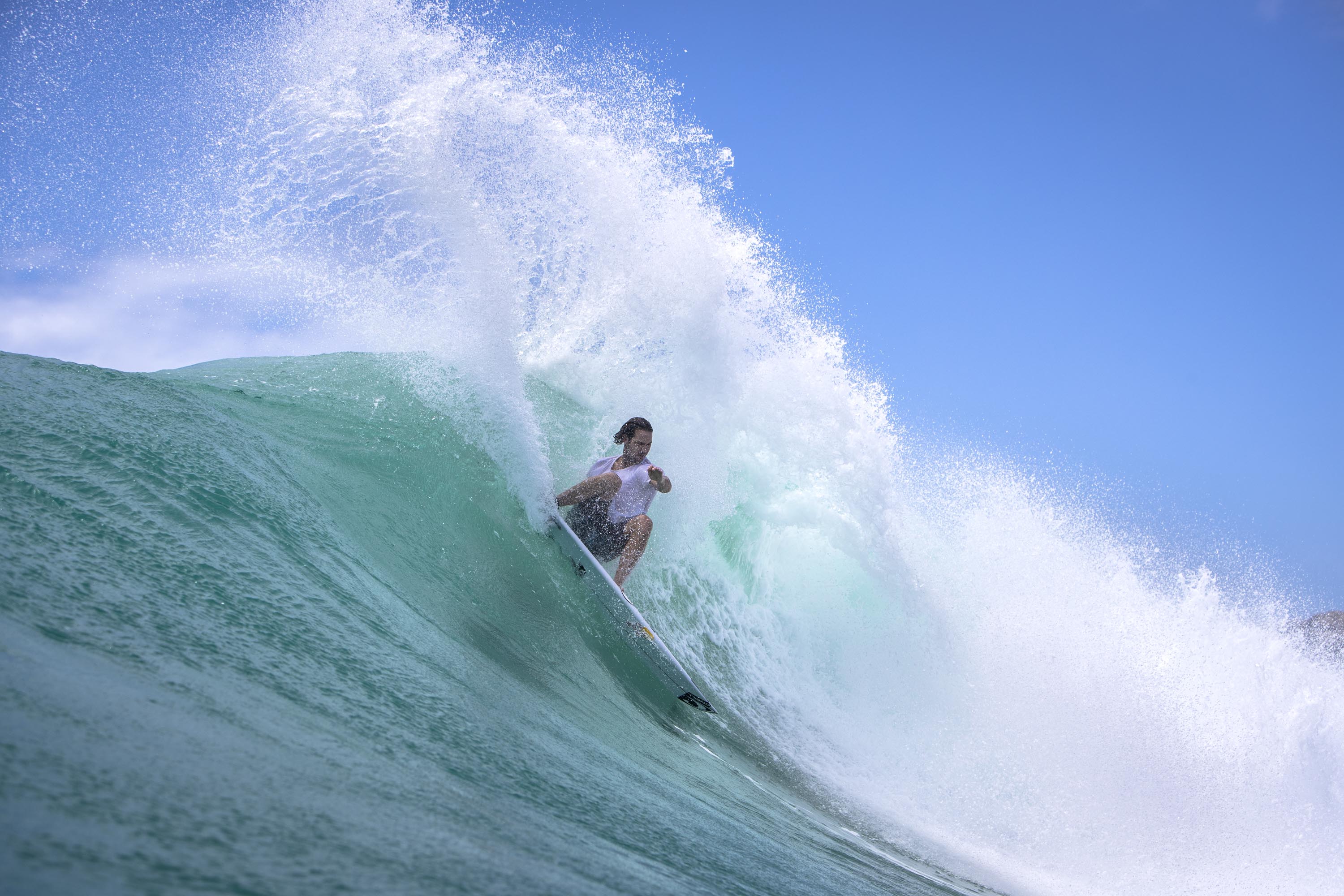 5. Jordy Smith mid-layback. A massive manoeuvre in the most critical part of the wave that would have been a ten in any event. 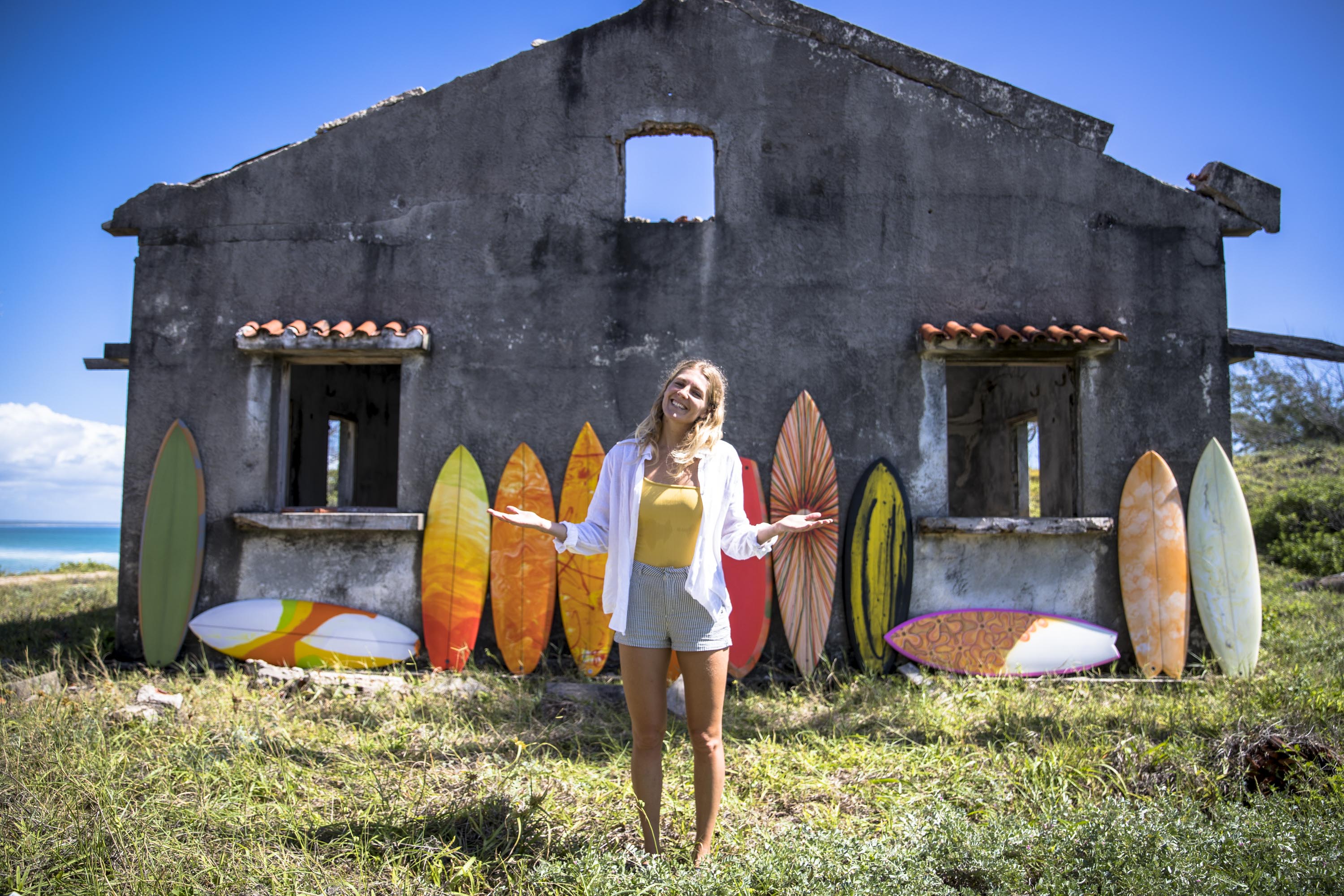 6. As the swell peaked in Mozambique, Stephanie Gilmore – along with a tight and talented crew from Stab, arrived to join Jordy for the start of the second instalment if their highly successful ‘Electric Acid Surfboard Test’ where 12 unconventional surfboards from around the globe are tested by the worlds best to hopefully reveal a winner. 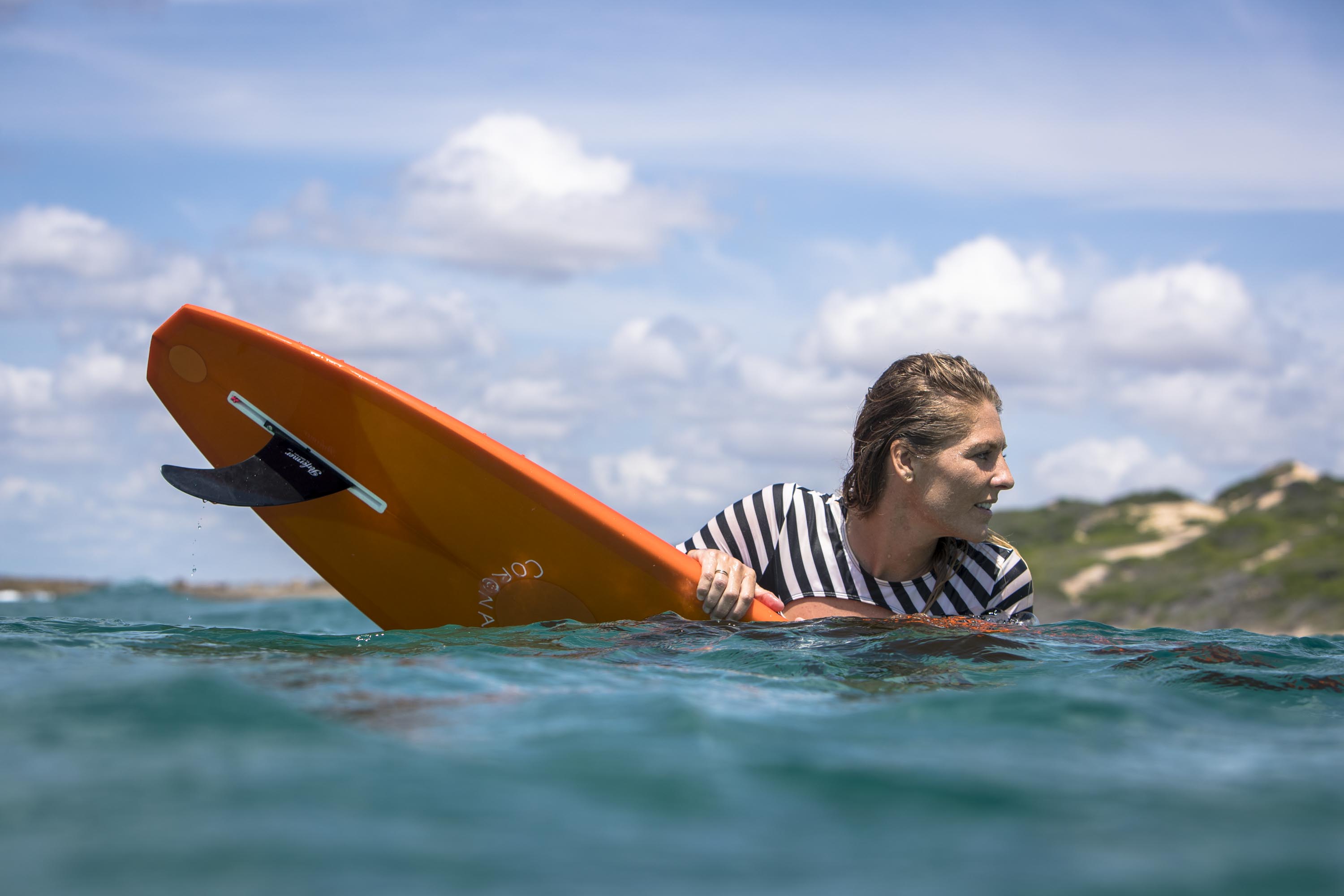 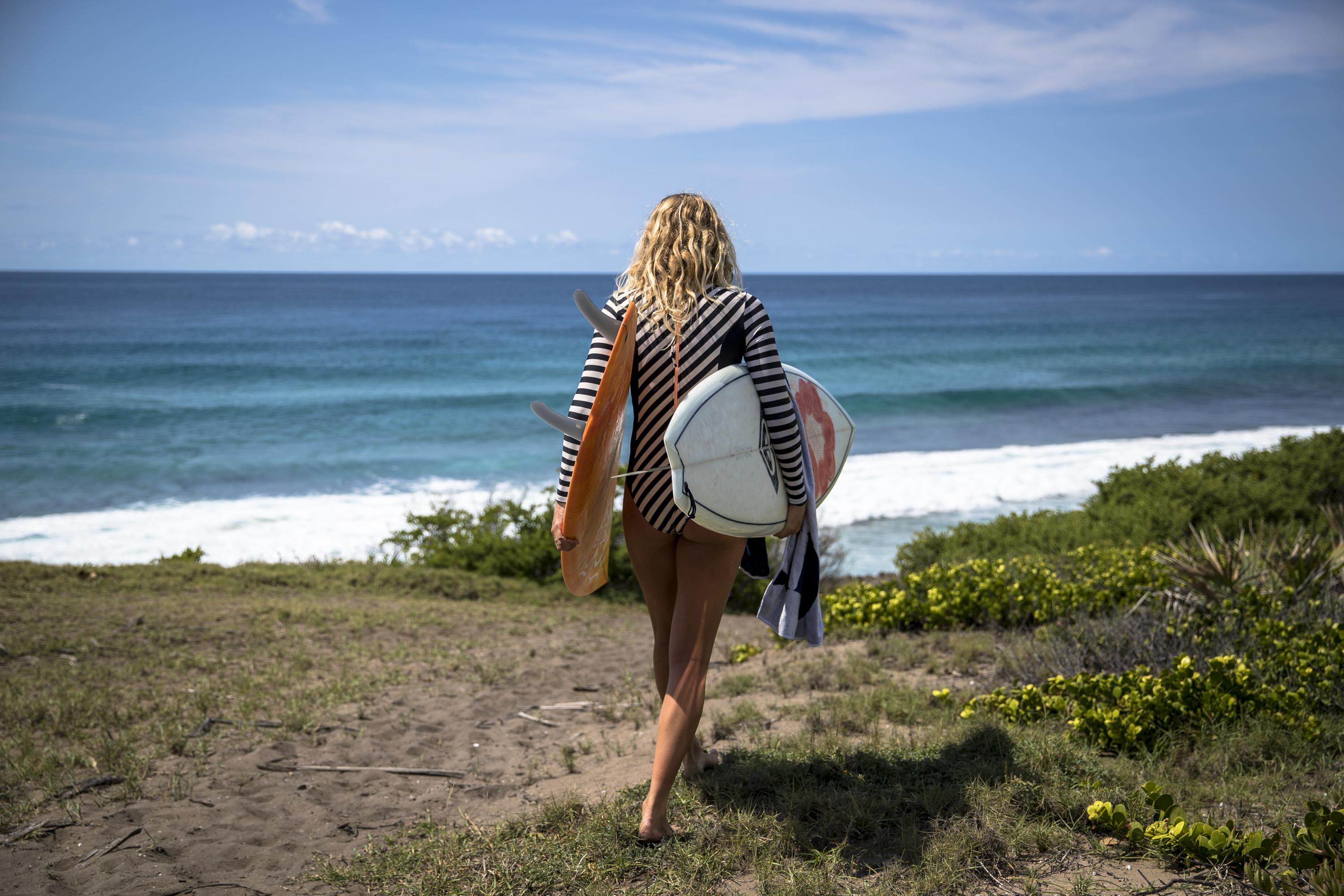 8. It doesn’t look like it in this idyllic photograph, but Mozambique at this time of year was sweltering hot and unbearable in the mid-day sun. Getting down to the waters edge through that dark sand was a nightmare barefoot not to mention the difficulty of applying wax. 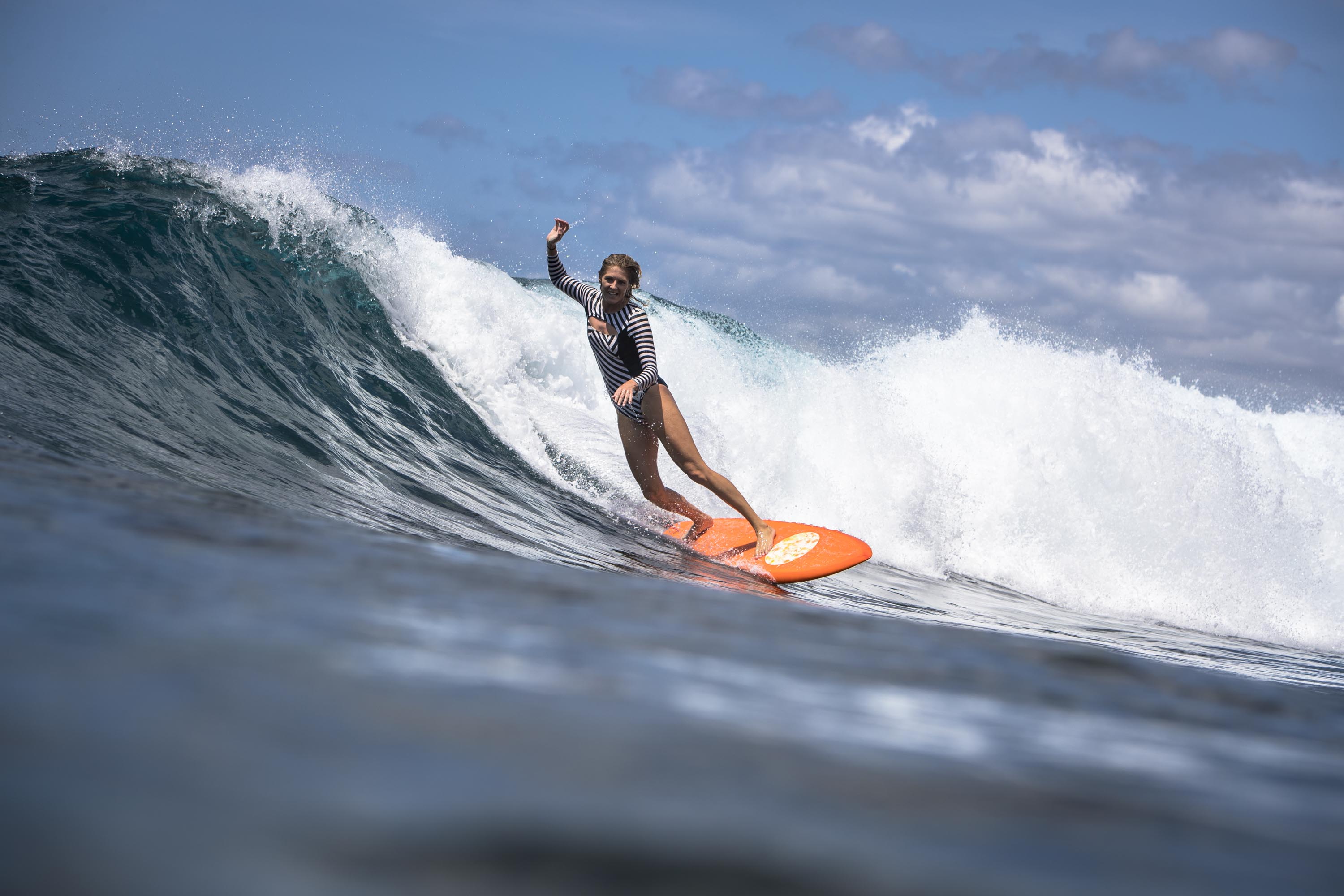 9. This photograph made the cover of the films artwork for obvious reasons. Some people think that style is forced. Once you’ve spent even a fraction of time with people like Steph you realise style is something that just comes naturally. 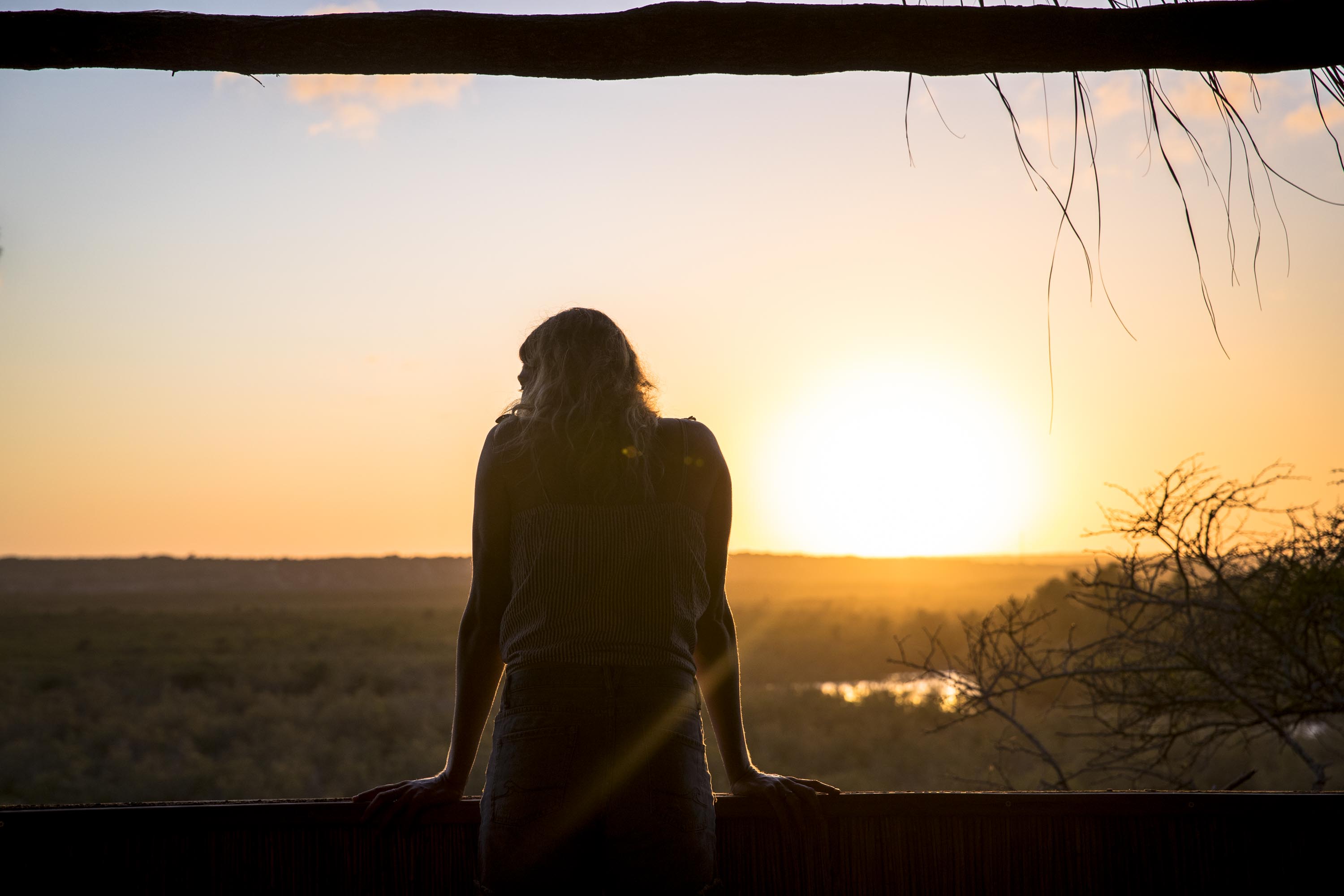 10. Appreciating an African sunset is like appreciate a good year; soak in the moment and just be grateful. Steph enjoying a rare moment of peace away from the business of professional surfing. 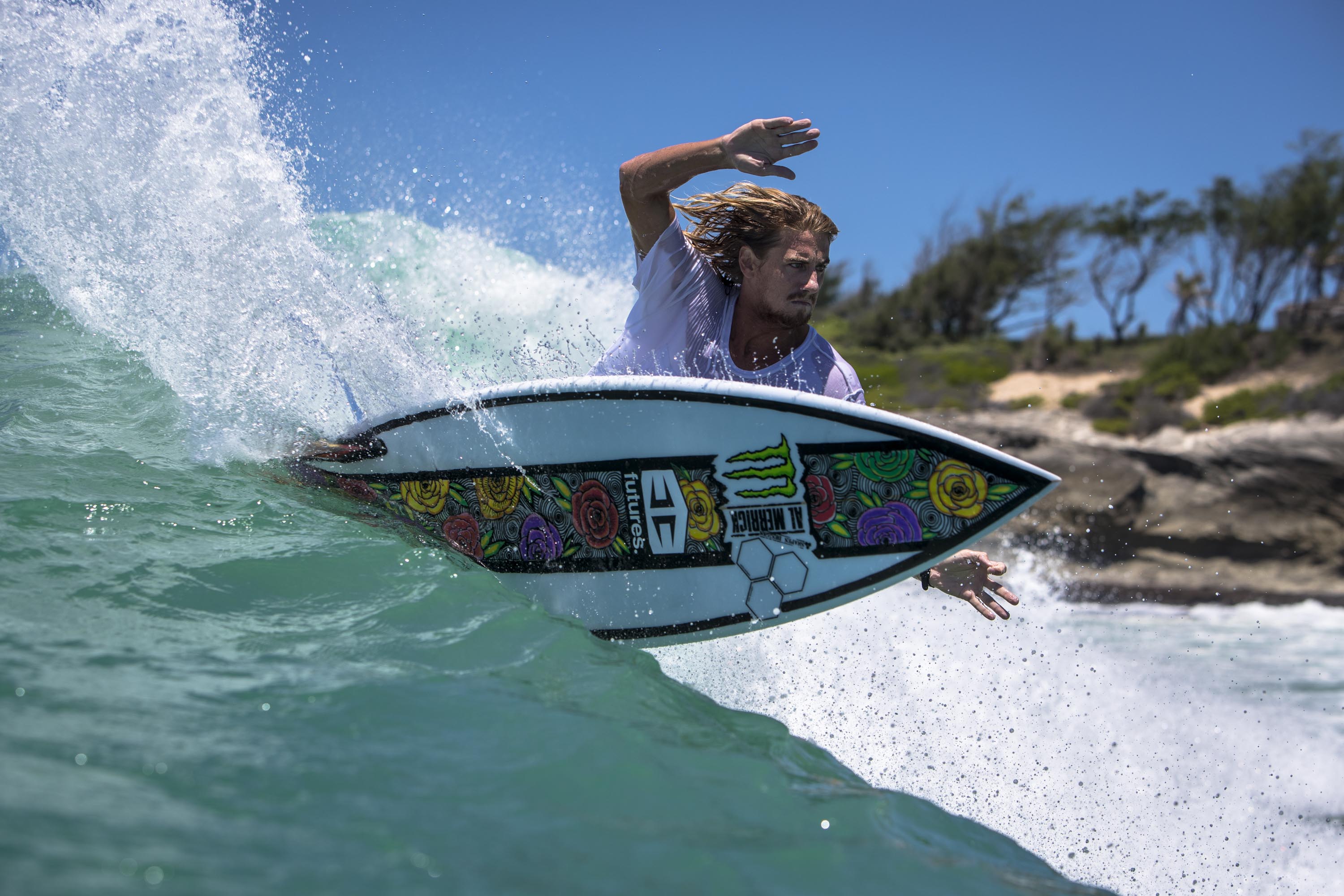 11. While we were in Mozambique I bumped into my good friend and one of my favourite surf subjects Mr.Beyrick de Vries. It’s been amazing and very rewarding to see him mature and grow throughout the year to finish 28th in the world in 2019 – frustratingly close to qualifying with fellow South African Matt McGillivray

12. Many people don’t know this about me, but for the better part of my junior and high school years I was an unknown bodyboarder who loved nothing else but to ride the barrel over shallow reefs and shore-breaks around the Cape when I wasn’t training to be a competitive swimmer. I dreamt of surfing waves like these, and I’m incredible grateful to my fellow boog chargers for keeping this dream alive by sharing their lineups with me today. 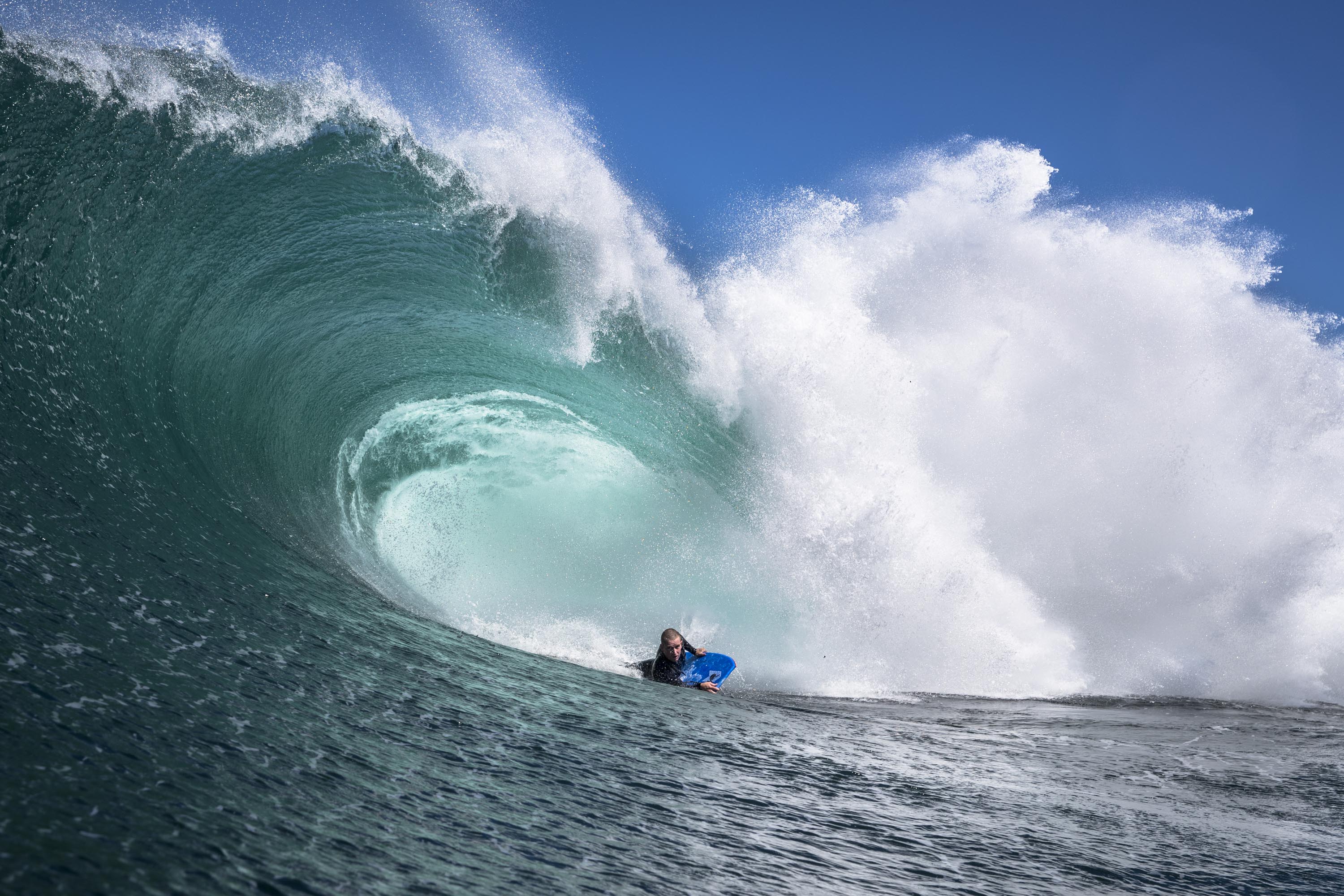 13. The view from the water of the previous slide.  This was an ultra-rare day… the light, the swell, the direction of wind and swell, the crew, everything. As you would have seen in the previous slide getting in and out and surfing this wave is no joke, and the guys who know this wave best charge it with a zeal and commitment you’ll struggle to find elsewhere. A special word of thanks to this man – Allan Horton, for inviting me every time this wave works.

14. It took countless hours of planning, weeks of excruciating patience and years of convincing to finally get back to the worlds best land-locked, freshwater, natural wave with a crew of the worlds best. A huge word of thanks to Stab and Vans for backing this project. 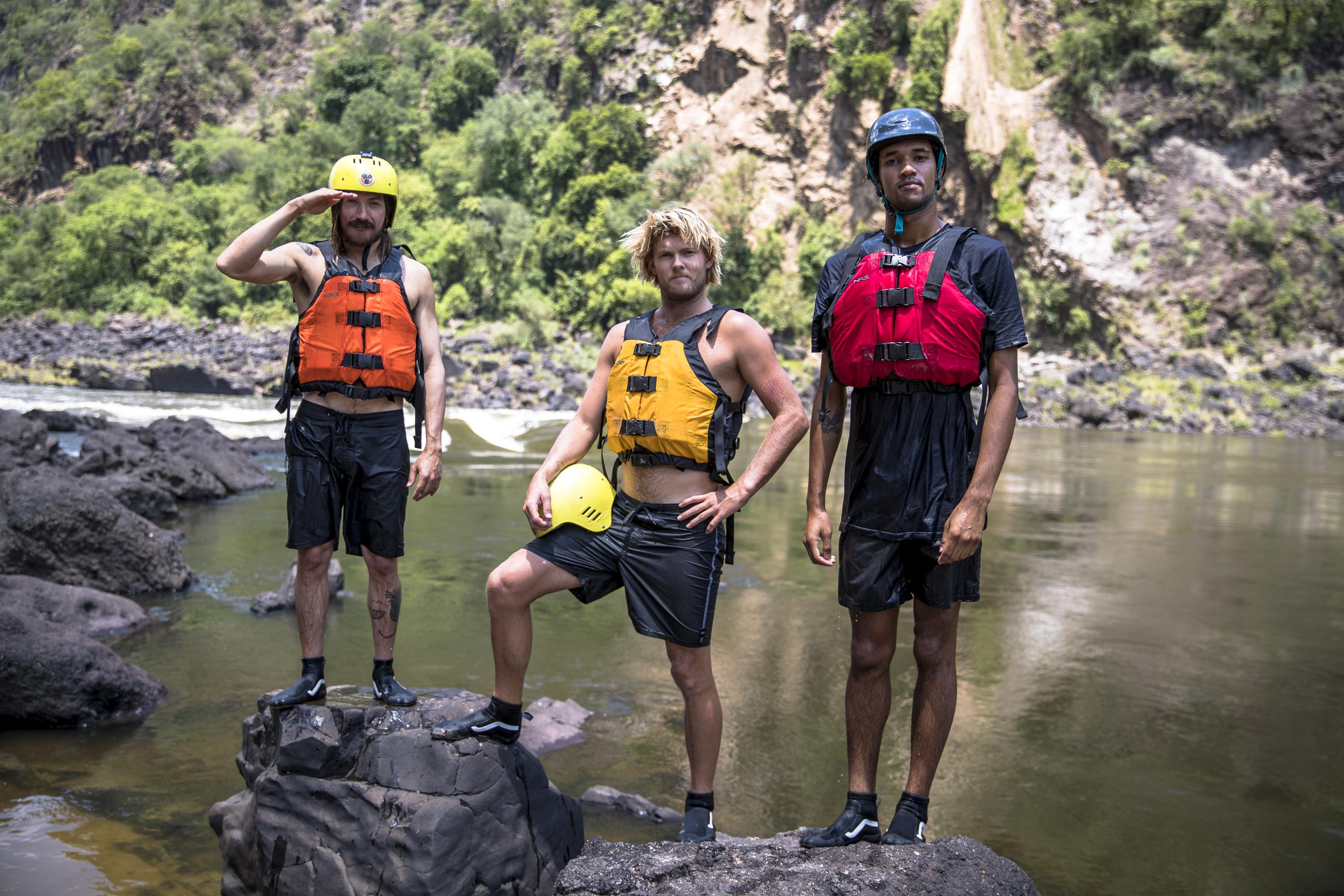 15. The ultra-talented crew of freshwater chargers Dylan Graves, Harry Bryant and Michael February. And no, the helmets and lifejackets were not just for show. Many of drowned riding this anomaly. 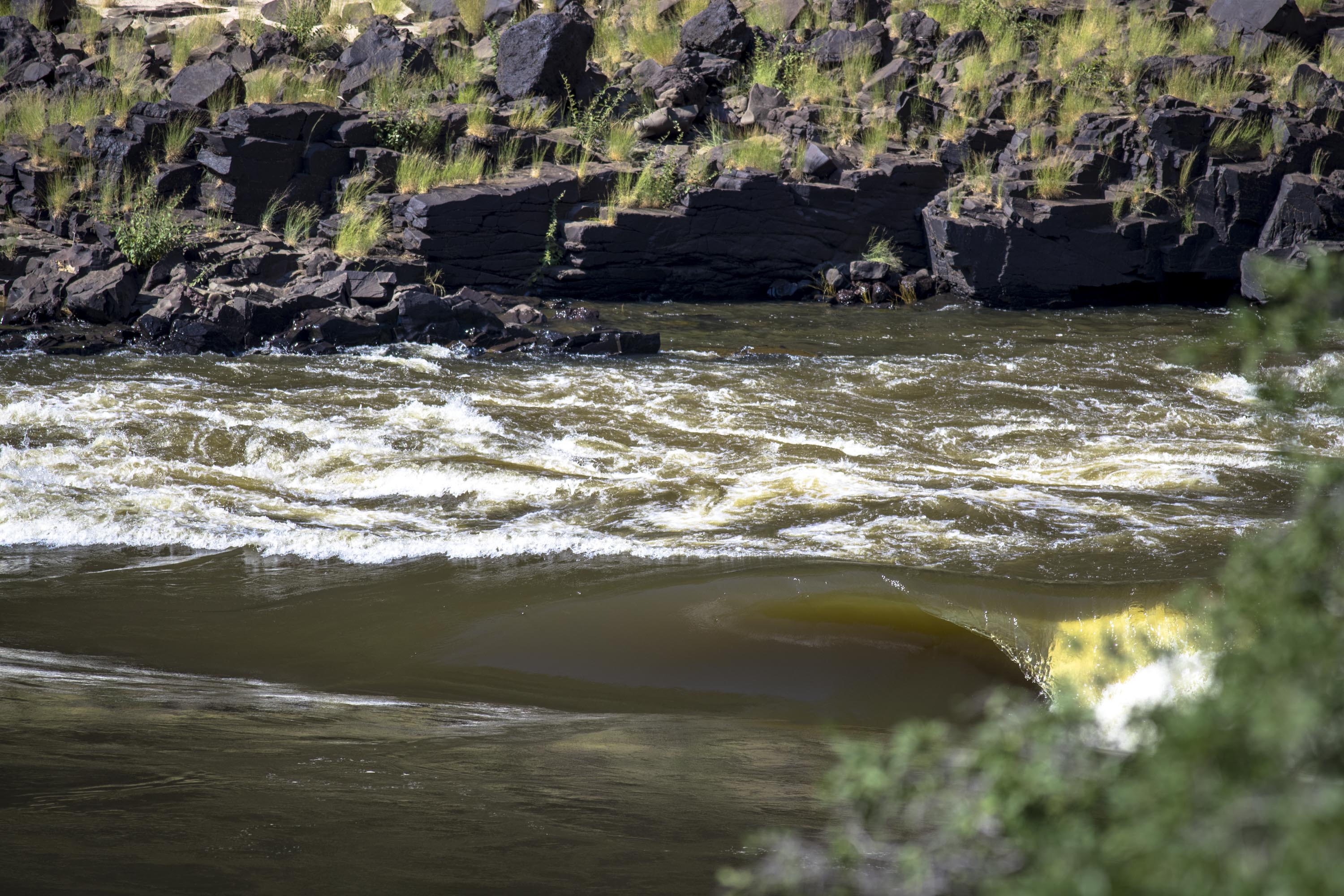 16. Like any freak of nature it’s almost impossible to describe in words or visuals what this place actually feels like, but trust me when I say it’s a very special place. Working only twice a year for a week max when the mighty Zambezi floods, the river levels rise and fall to reveal the tubing natural wonder known as Rapid 11. 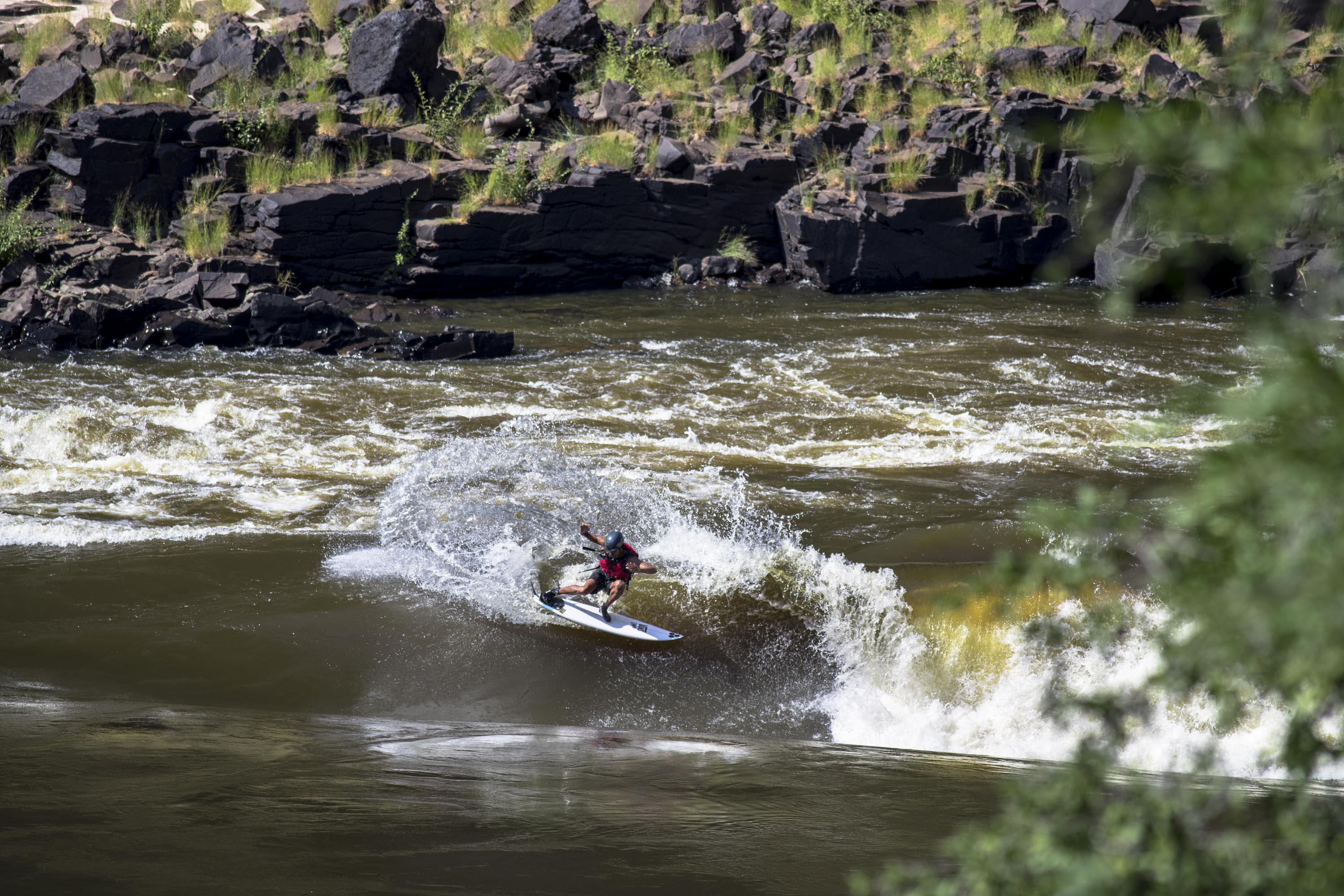 17. Light-footed stylist Michael February making the most of another African gem. 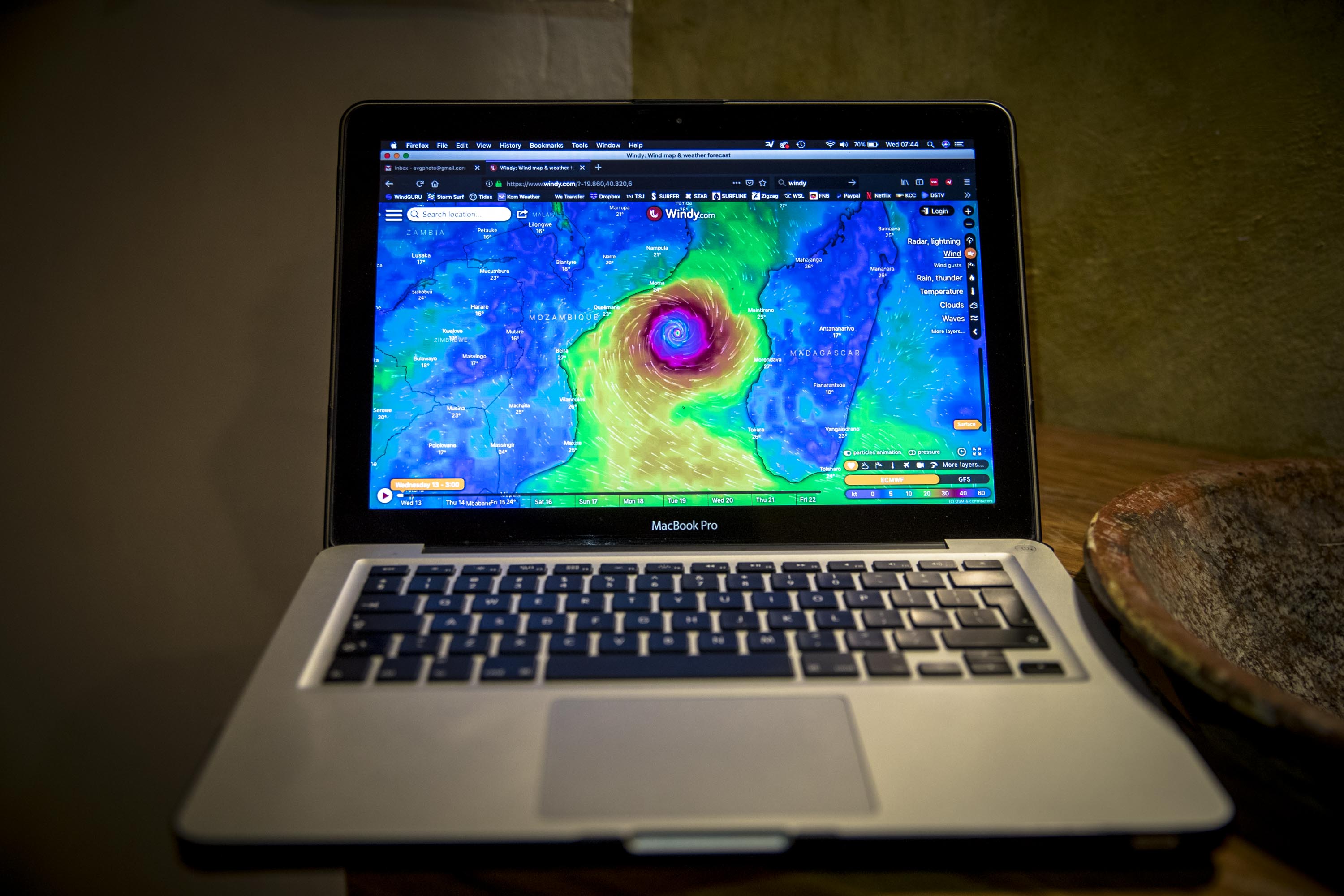 18. A few weeks after The Zambezi project this massive system erupted onto cyclone forecasting models. A tight crew including Matt Bromley, Harry Bryant and Brendon Gibbens joined Ryan Ribbink to chase what was to become the worst tropical storm to hit Africa in history, destroying more than 90% of Beira, leaving thousands dead and displacing countless more. 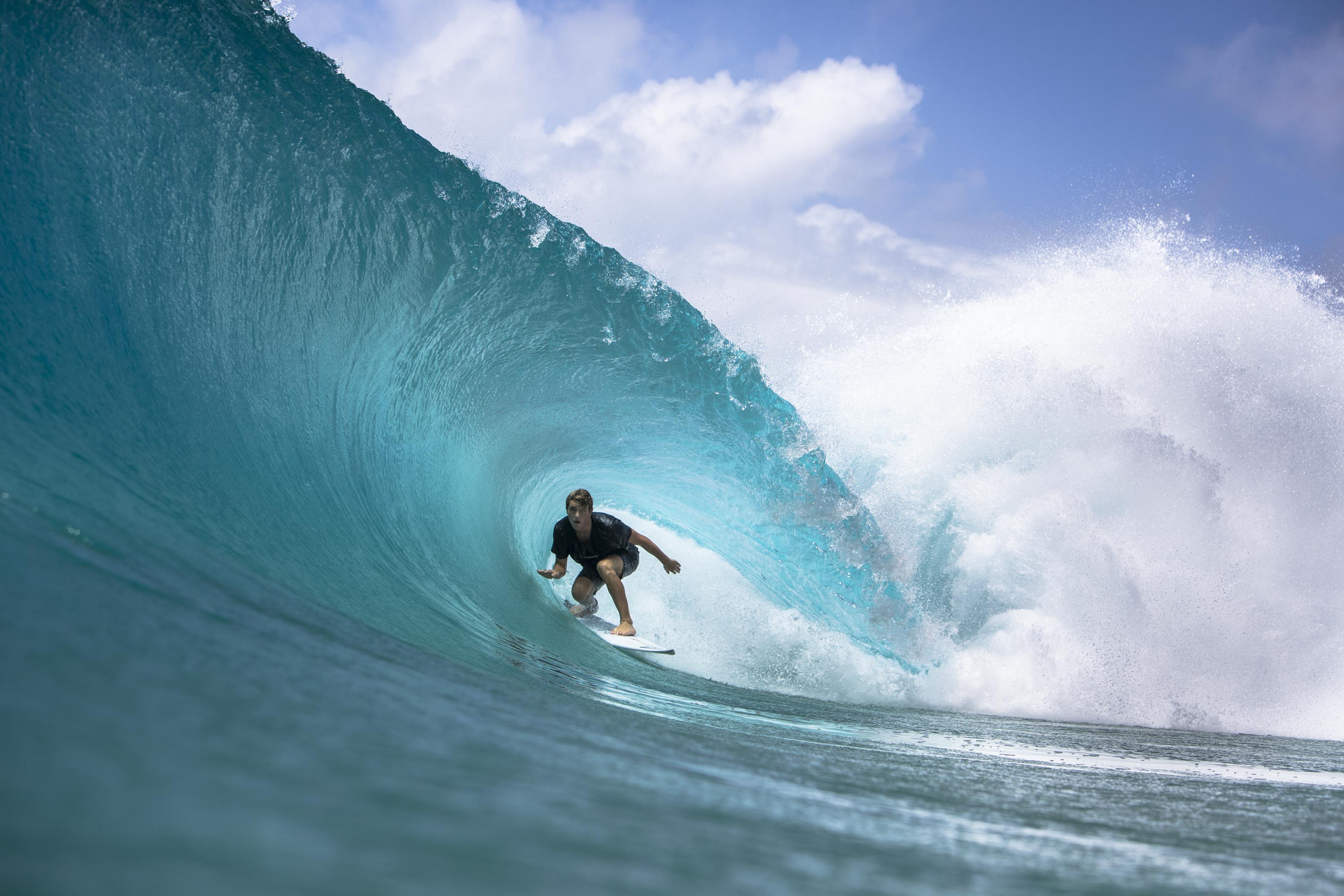 19. Unfortunately Cyclone Idai was far more dangerous and devastating than anyone had predicated, and while we rode some incredible waves a few hundred kilometers south Beira and surrounds was unknowingly to us utterly destroyed. It’s an unthinkable result of wave-generating storms, and we can’t prevent it. But we can prepare for it, and help when it does happen. Get involved and support surf-related organisations like Groundswell Aid and Waves for Water. 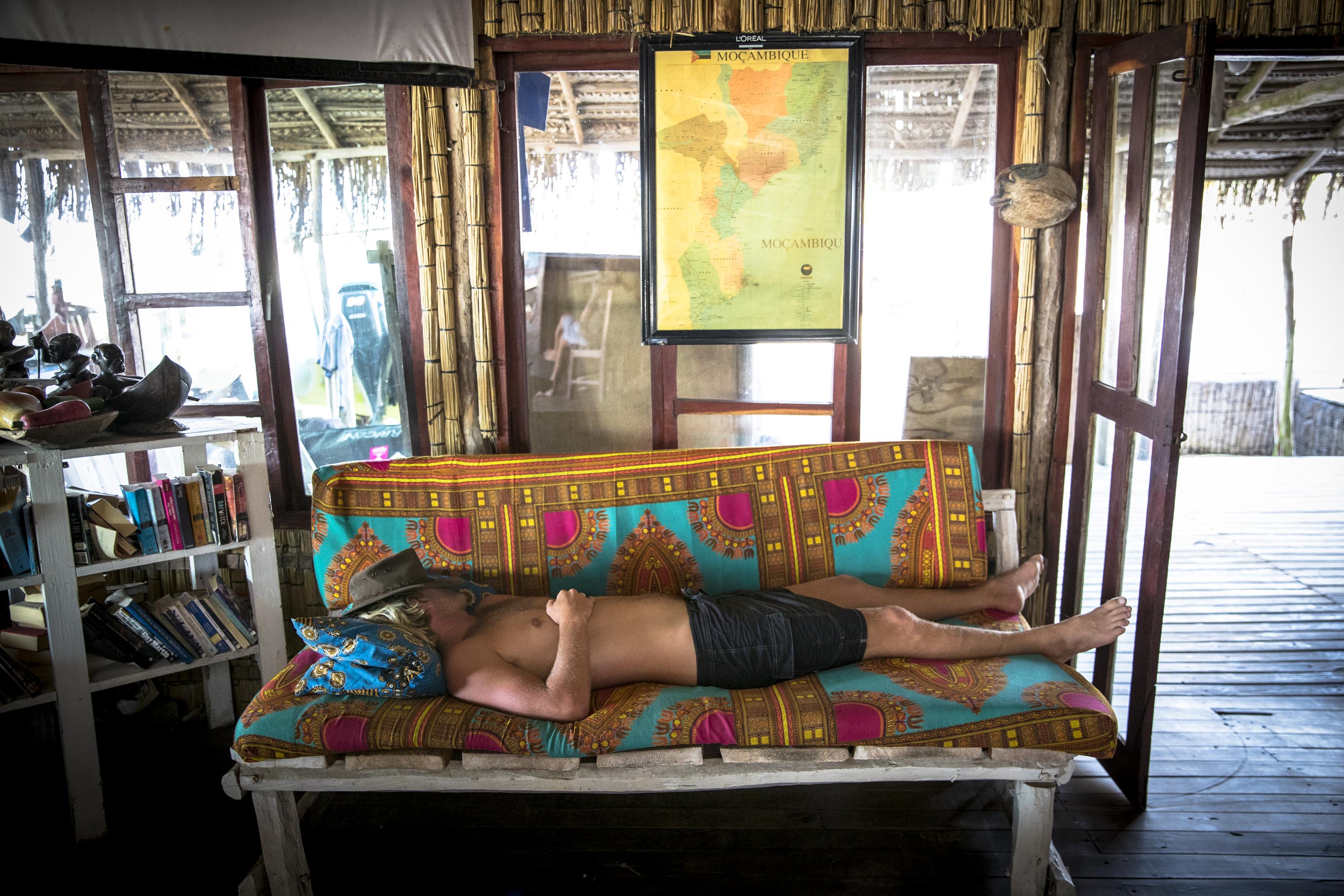 20. Australian Harry Bryant between the tides. 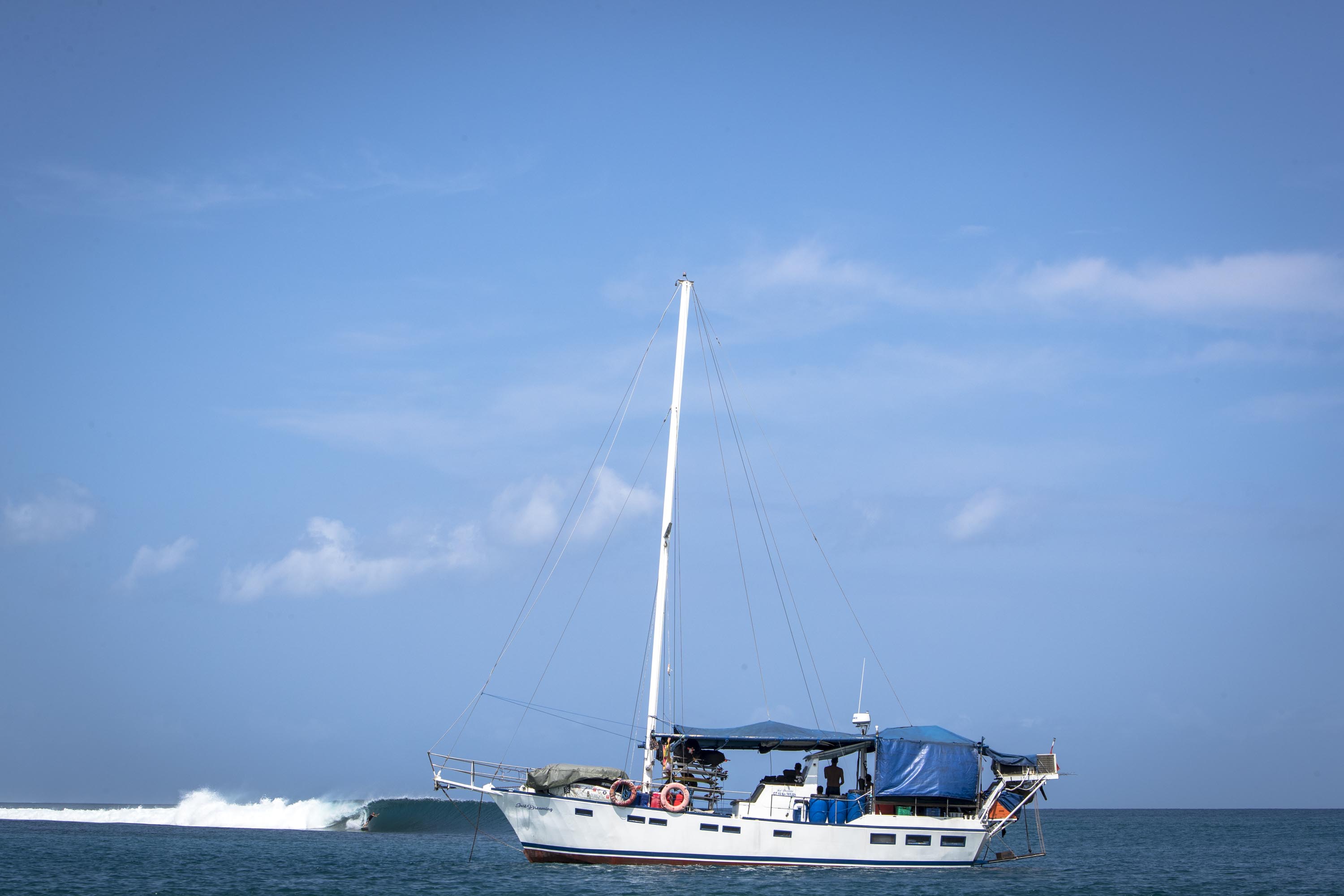 21. I don’t often travel outside of Africa but every now and then a great, unexpected opportunity comes along like this trip to West Java for US adventure brand Roark. For two weeks we searched out the best surf, spear-fishing, rock climbing, hiking through thick Javanese jungle, cliff diving and motor biking we could find. The results are some of the best work I’ve ever done in my humble opinion. Look out for the goods in January/February 2020. 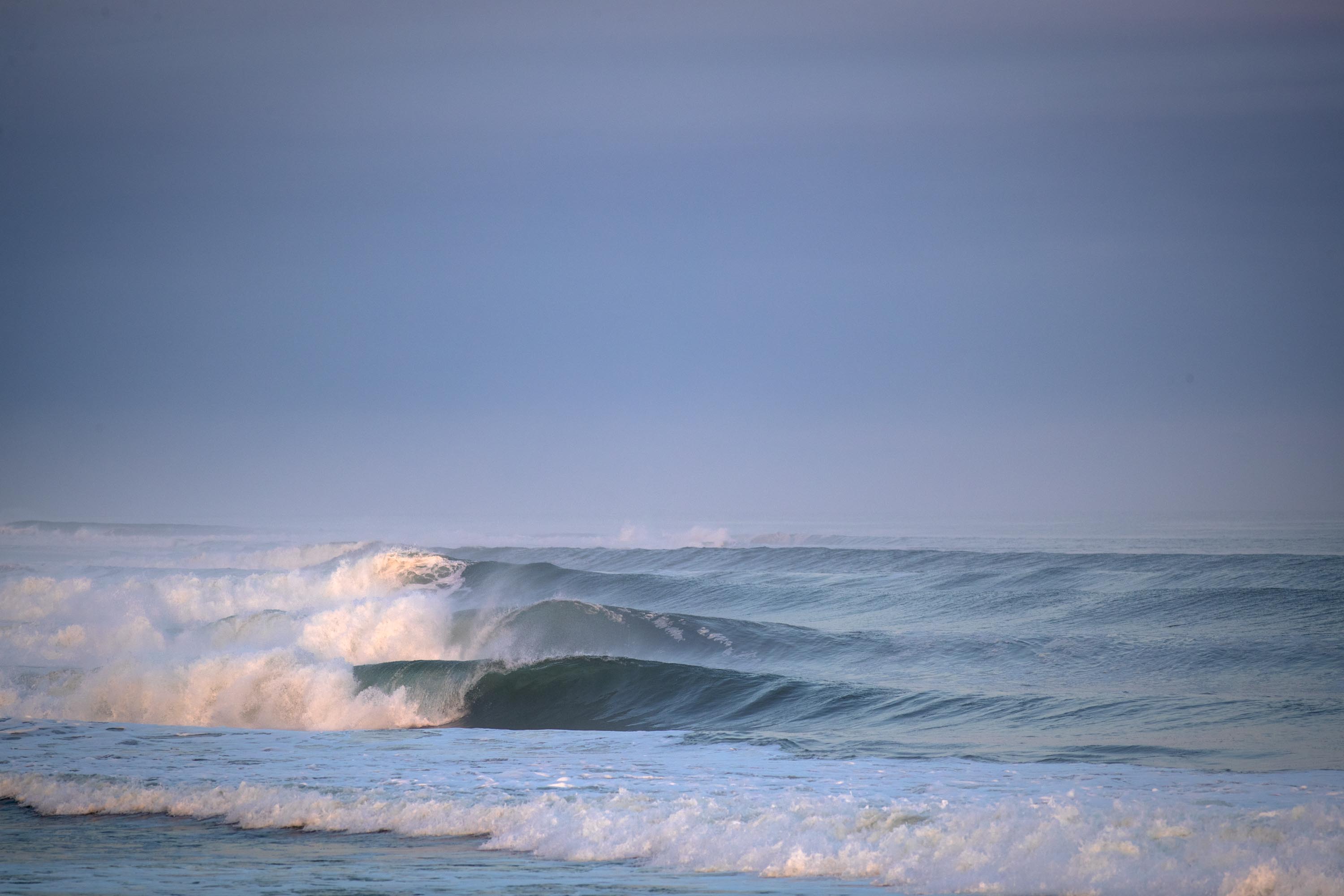 22. Every winter the focus is on the best west swell nature can generate out of the deep Atlantic for South West Africa. This year did not disappoint and we were blessed with some of the most incredible Skeleton Bay in it’s relatively brief history. 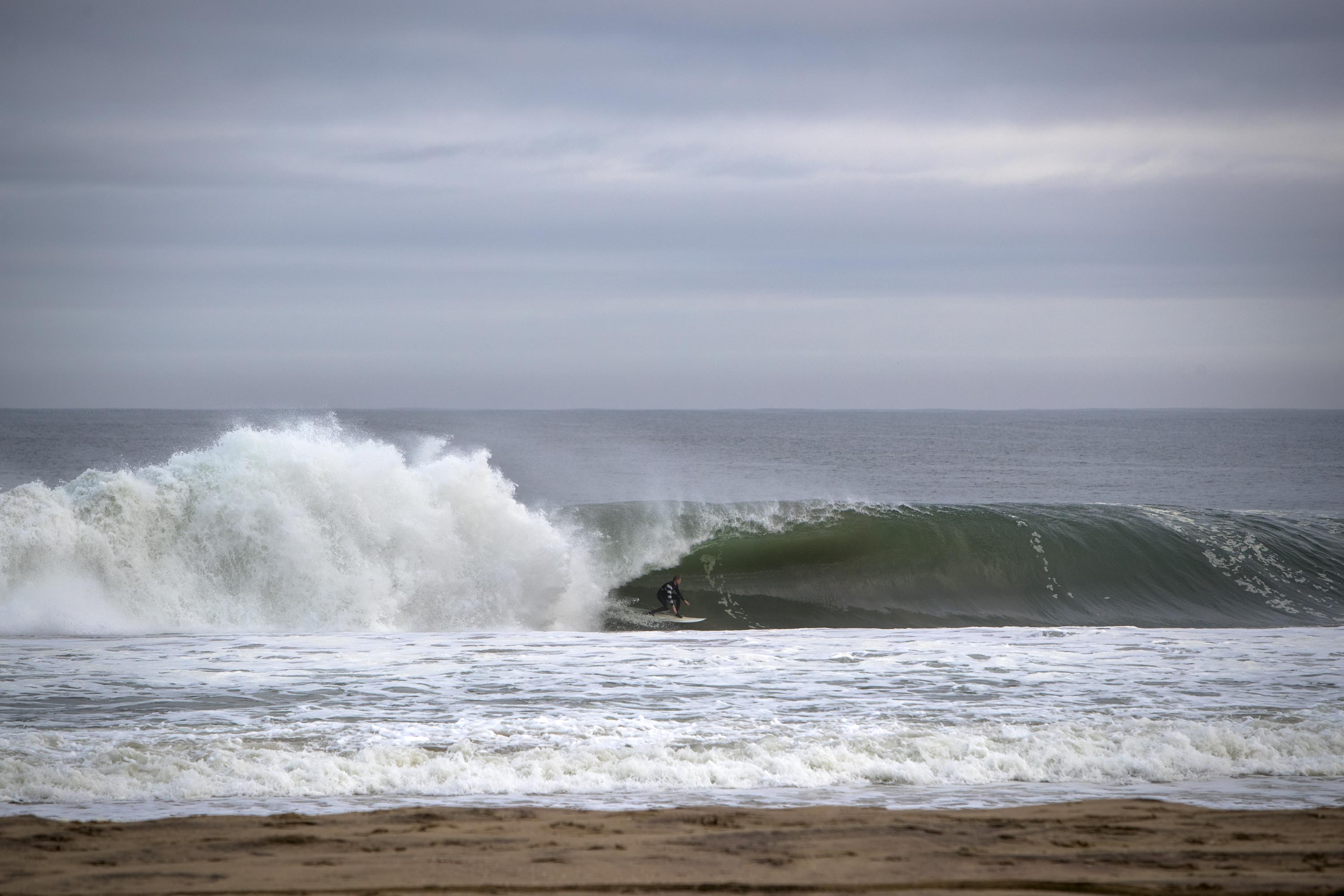 23. Look out for the documentary we’re making on the history of Skeleton Bay including footage and interviews with every major surfer and local due out in January 2020. It’s going to be great! 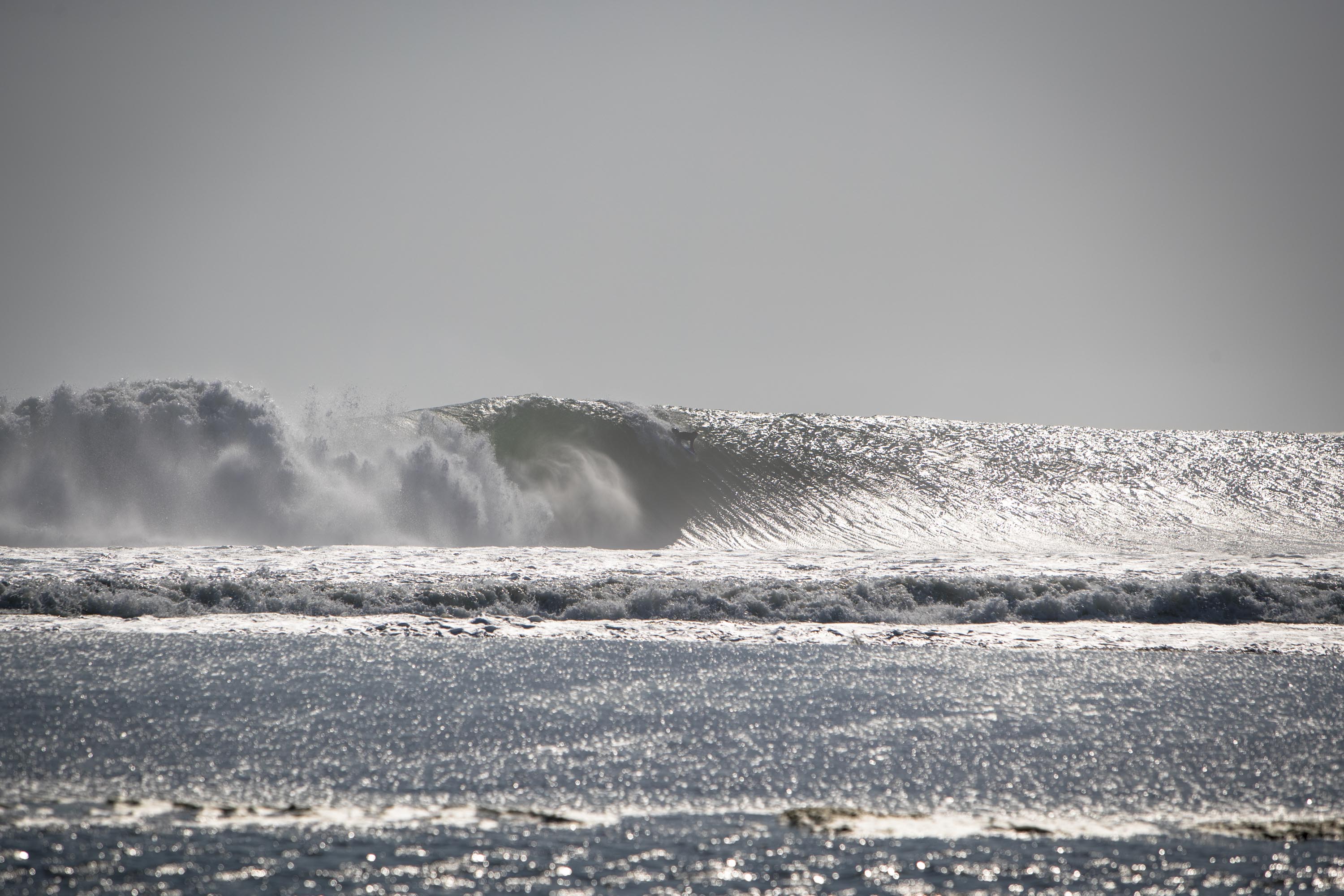 24. At the height of the rare, big west swell Skeleton Bay was doing this across two kilometres of groomed, sand-bottomed perfection. 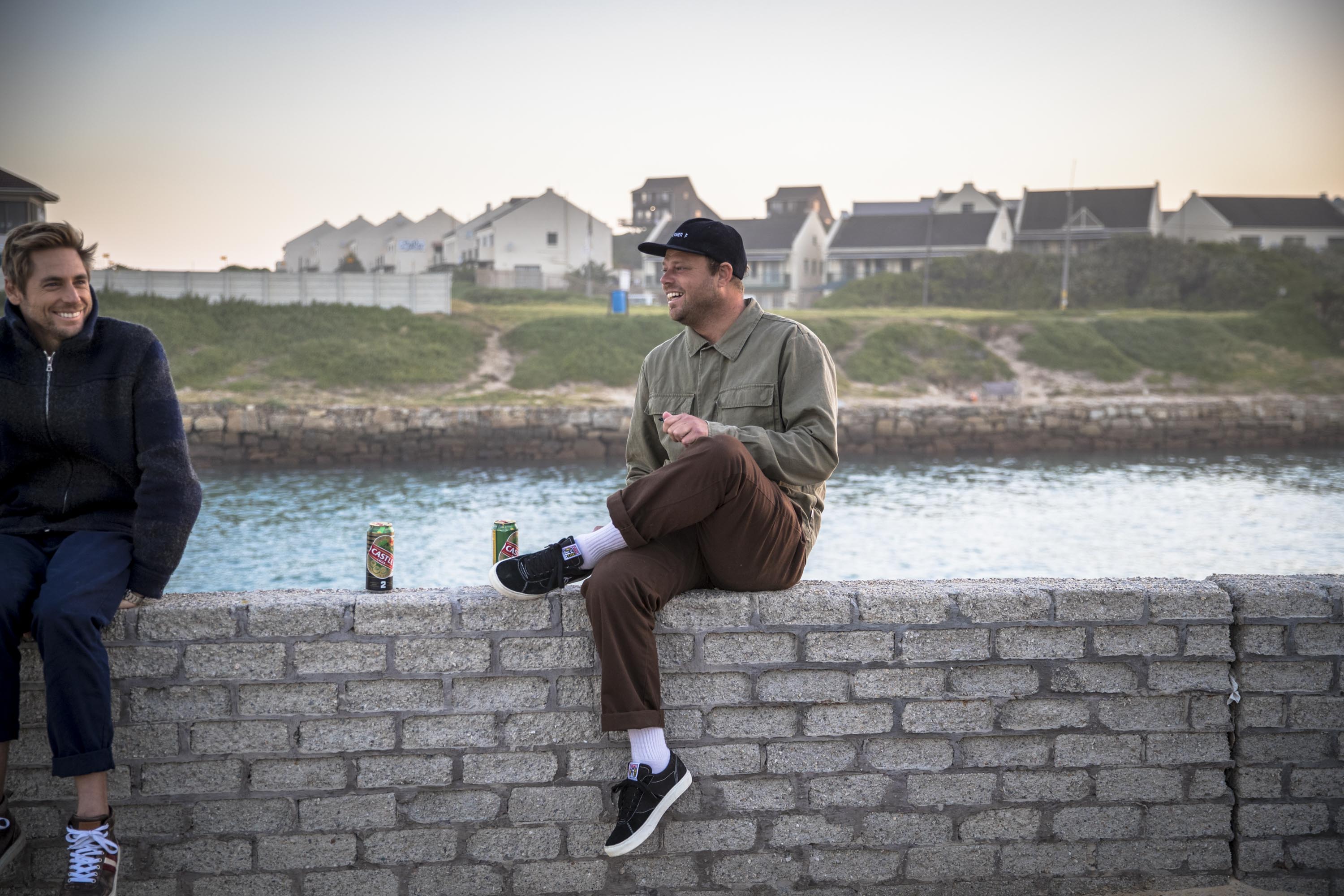 25. While filming for Stab’s fifth instalment of ‘Stab in the Dark’ in Port Alfred with all-star surfers Mick Fanning, Jordy Smith and here pictured Dane Reynolds. A huge word of thanks to the man on the left Sam McIntosh for his ongoing support from Stab. 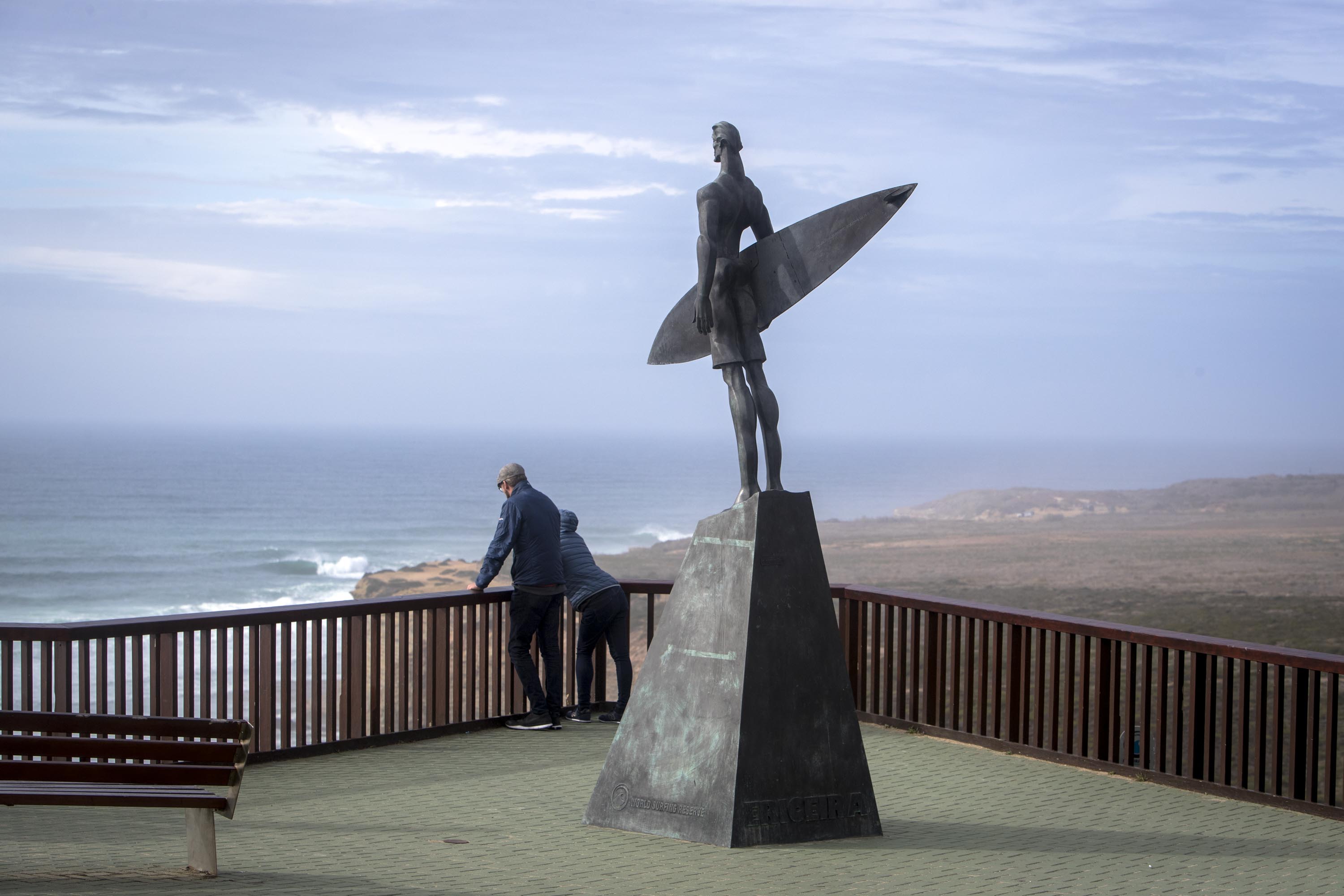 26. The last trip of 2019 for me was Portugal. While my focus was on Peniche’s famous beach break Supertubes for the WSL event, I received a call from Portuguese heavyweight Nic von Rupp that one of Europes gnarliest slabs might be working tomorrow and would I like to swim. 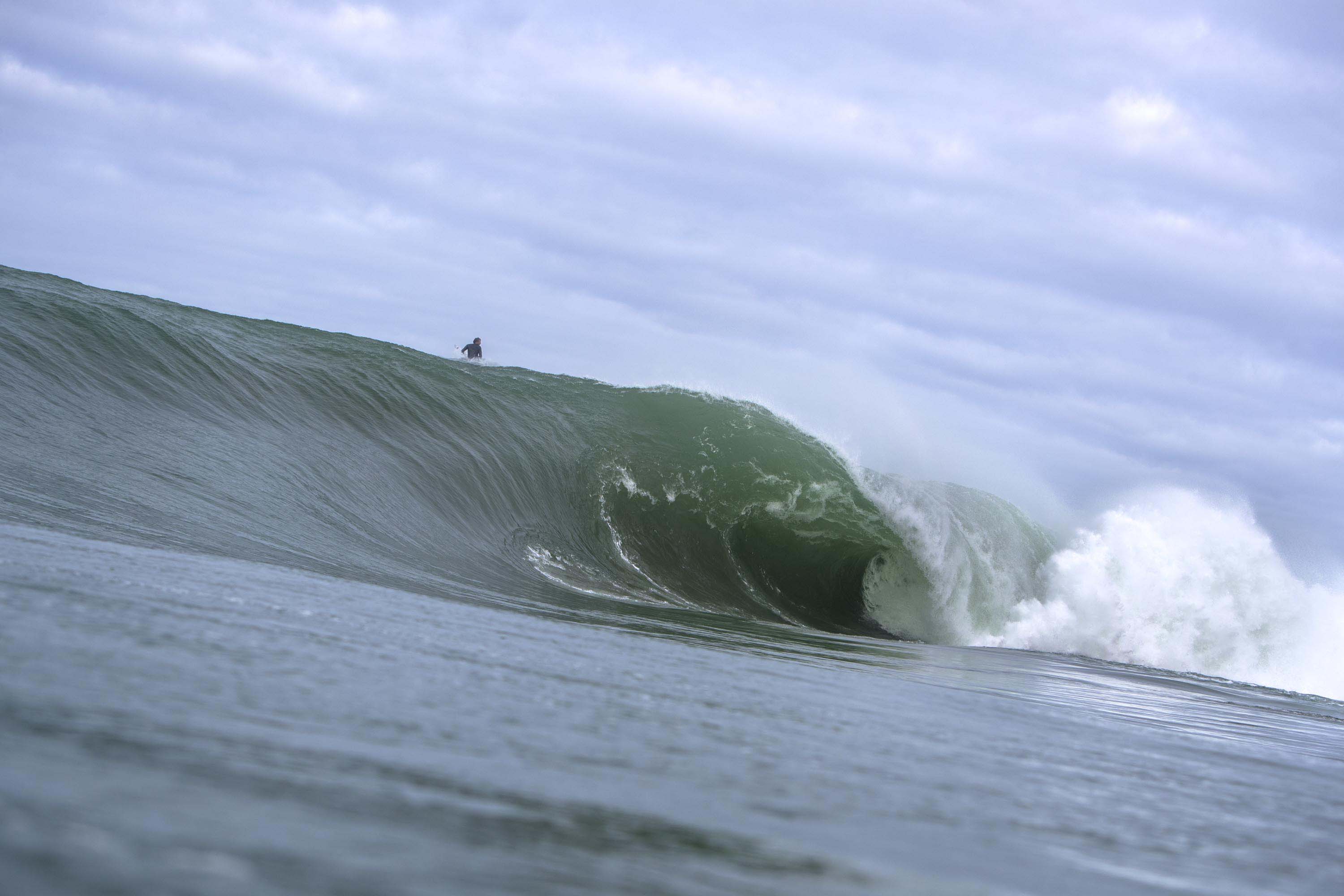 27. Maybe I should have asked a few more questions before jumping into the churning mass that was the ocean the next day. It is probably the heaviest wave I have every swum out to and photographed. Here Torrey Meister looks down as the weight of the ocean unfolds onto almost dry reef. 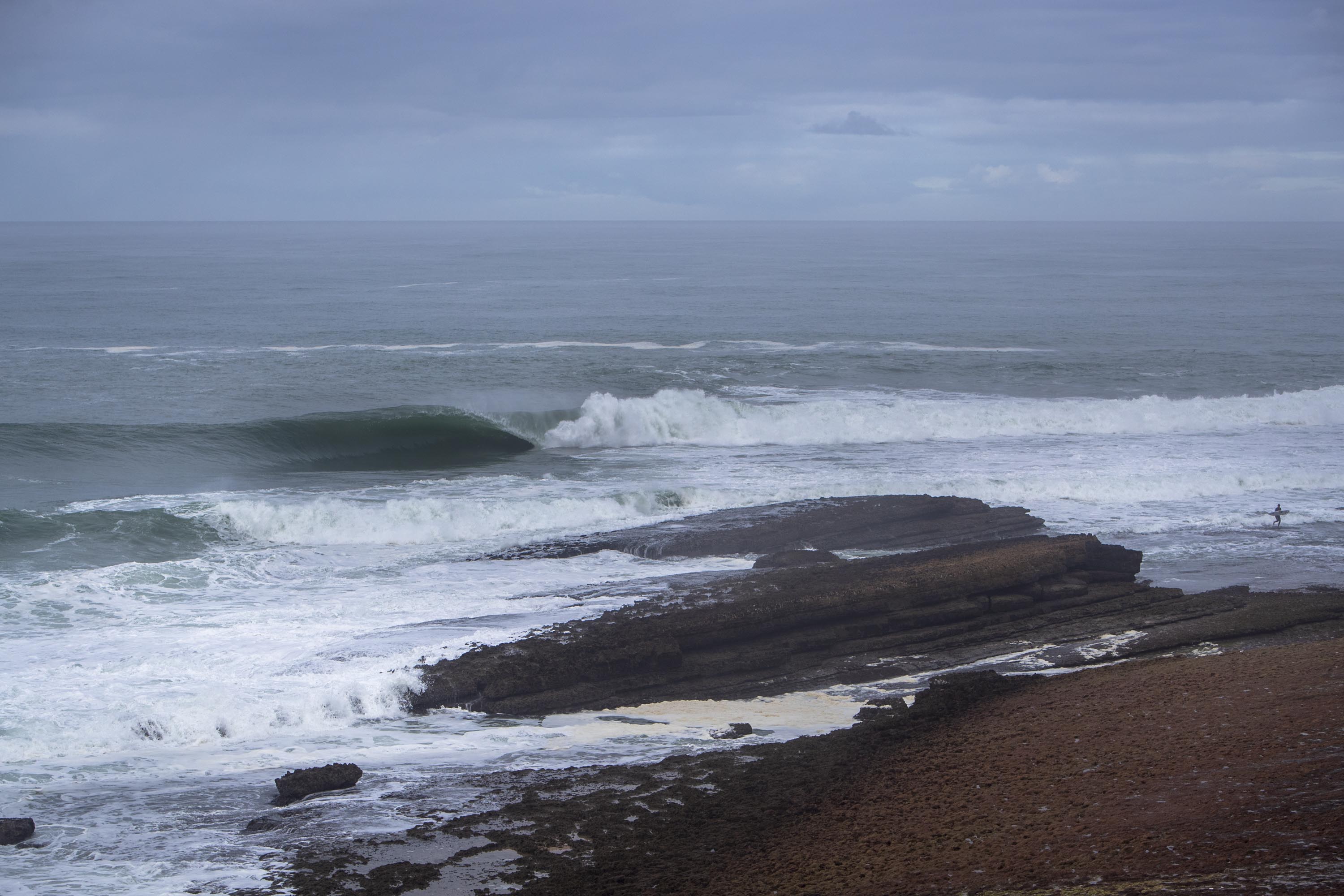 28. Few people can surf waves like these, so it is no wonder only three gave it a go – Albee Layer, Torrey Meister and Nic von Rupp. Shortly before I made it safely to shore and photographed this a monstrous set mowed everyone down and washed us all over the rocks. Session closed. Safety first. 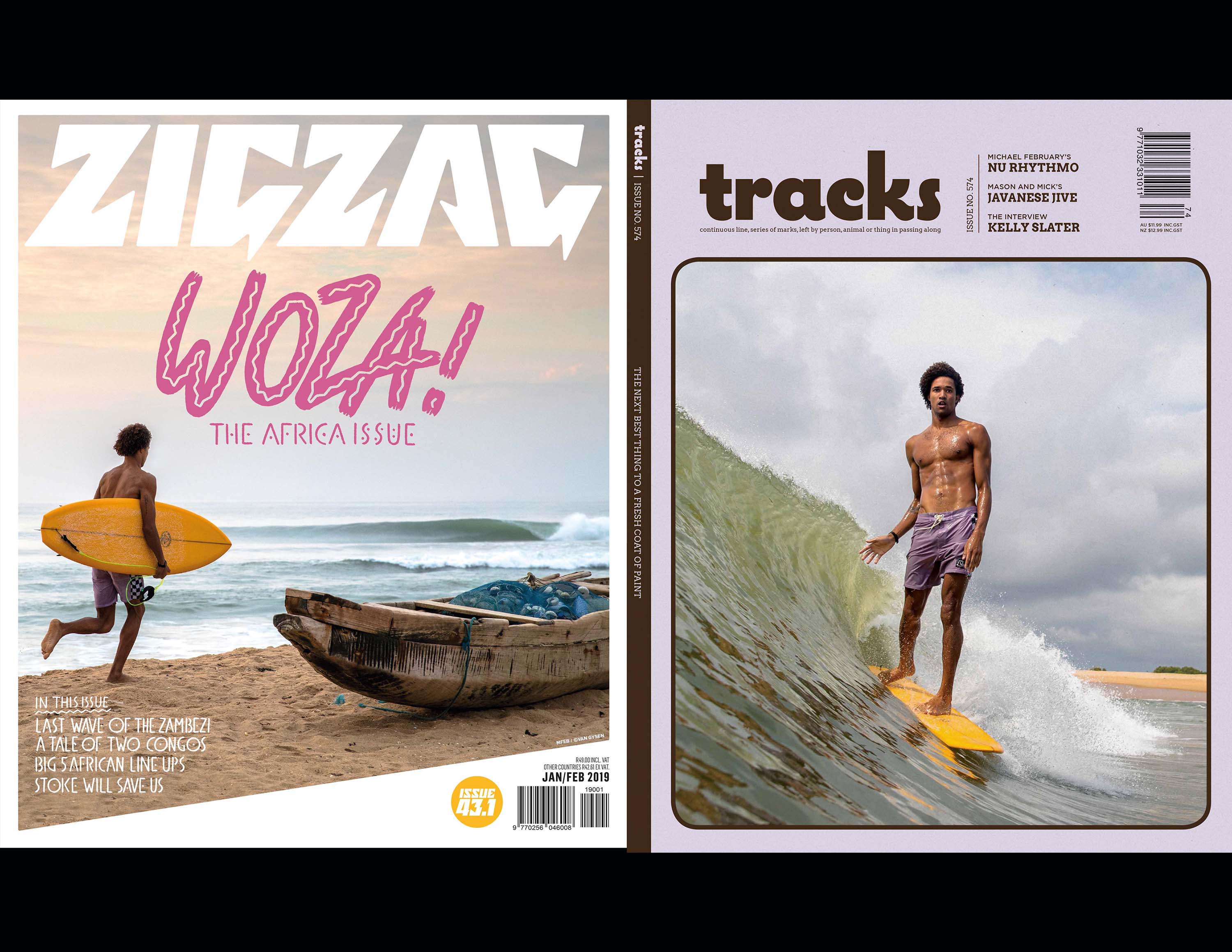 29. The ultimate reward for any stills photographer and two of my favourites in 2019 – page 1, otherwise known as a front cover! Michael February, West Africa.