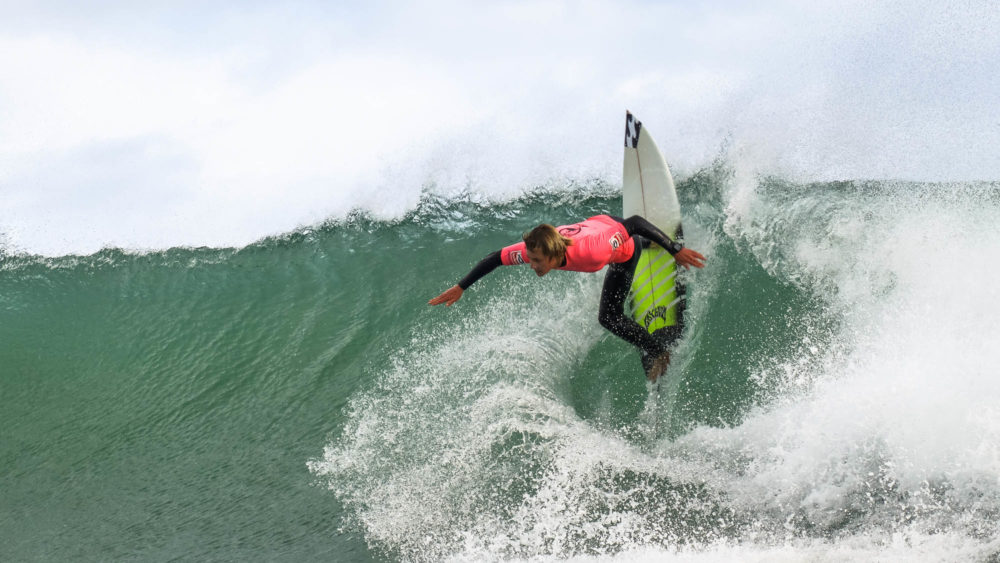 This Friday the 13th groms from all corners of Mzansi littered the shores of Long Beach Kommetjie for the annual Bos Cape Crown presented by Sea Harvest. And for once, conditions were looking a peach….. eventually.

Moving on from a chaotic warmup session, Day 1 got underway. A slight morning chill greeted competitors along with a pretty stiff onshore creating a few lumps and bumps on the face. However, a decent bit of swell was rolling in from the cold Atlantic making for plenty opportunity out in the lineup. Previous years have been subject to a bit of bad luck where swell is concerned so it was a welcomed treat to see 2-3 foot runners out back with the wind sorting itself out through the course of the day. 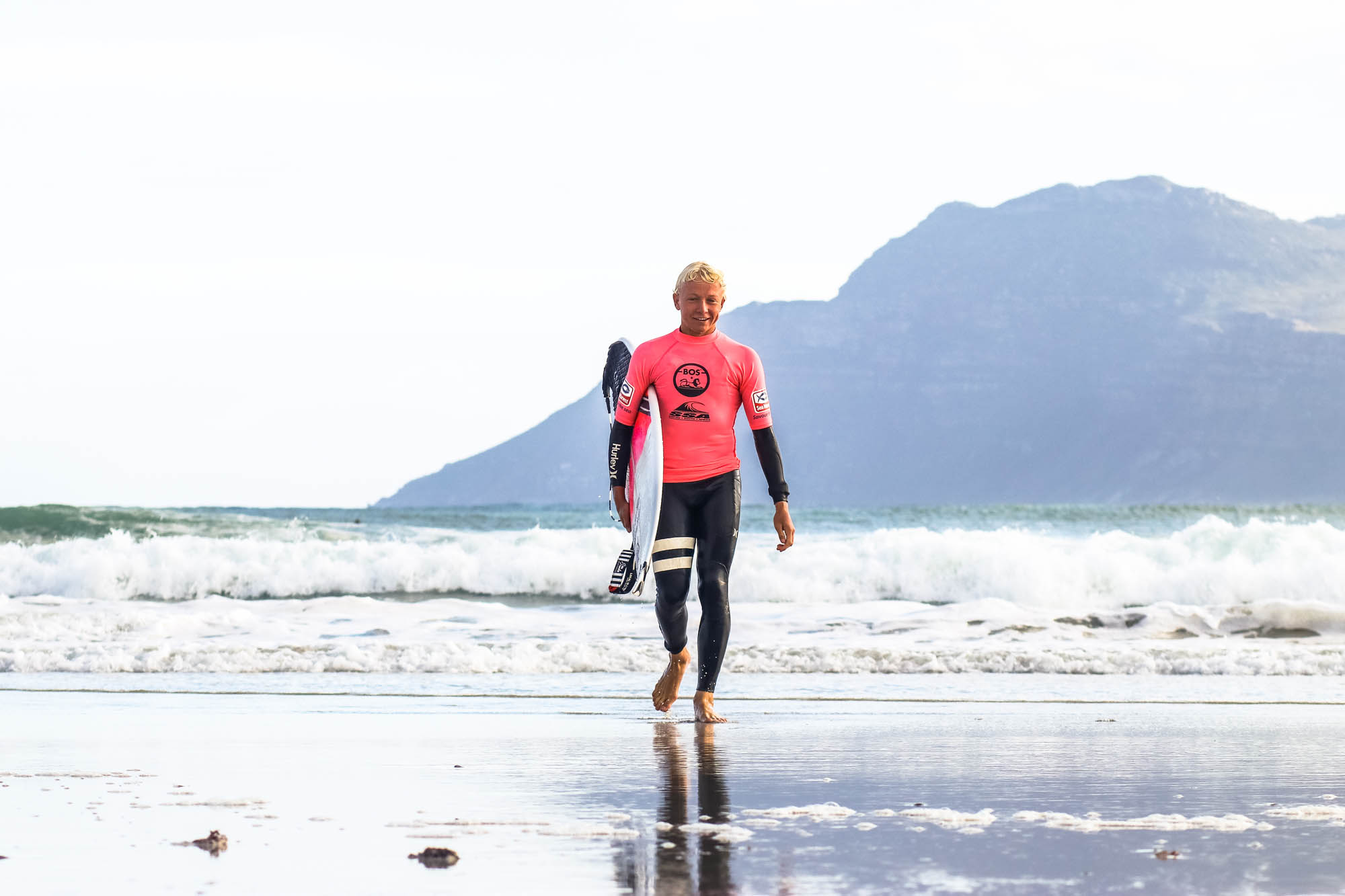 The first round of the day saw the U16 Boys division take on a lineup tainted with morning sickness. The highest score of the first heat dropping in at a 3.15, get the picture. From then on things got much better. Daniel Emslie, like a young Bill Nye, was methodical in his approach and absolutely unforgiving on his backhand, milking the wave all the way to the shore-break. The young lad dominated the heat, bullying the wave and taking its lunch money. 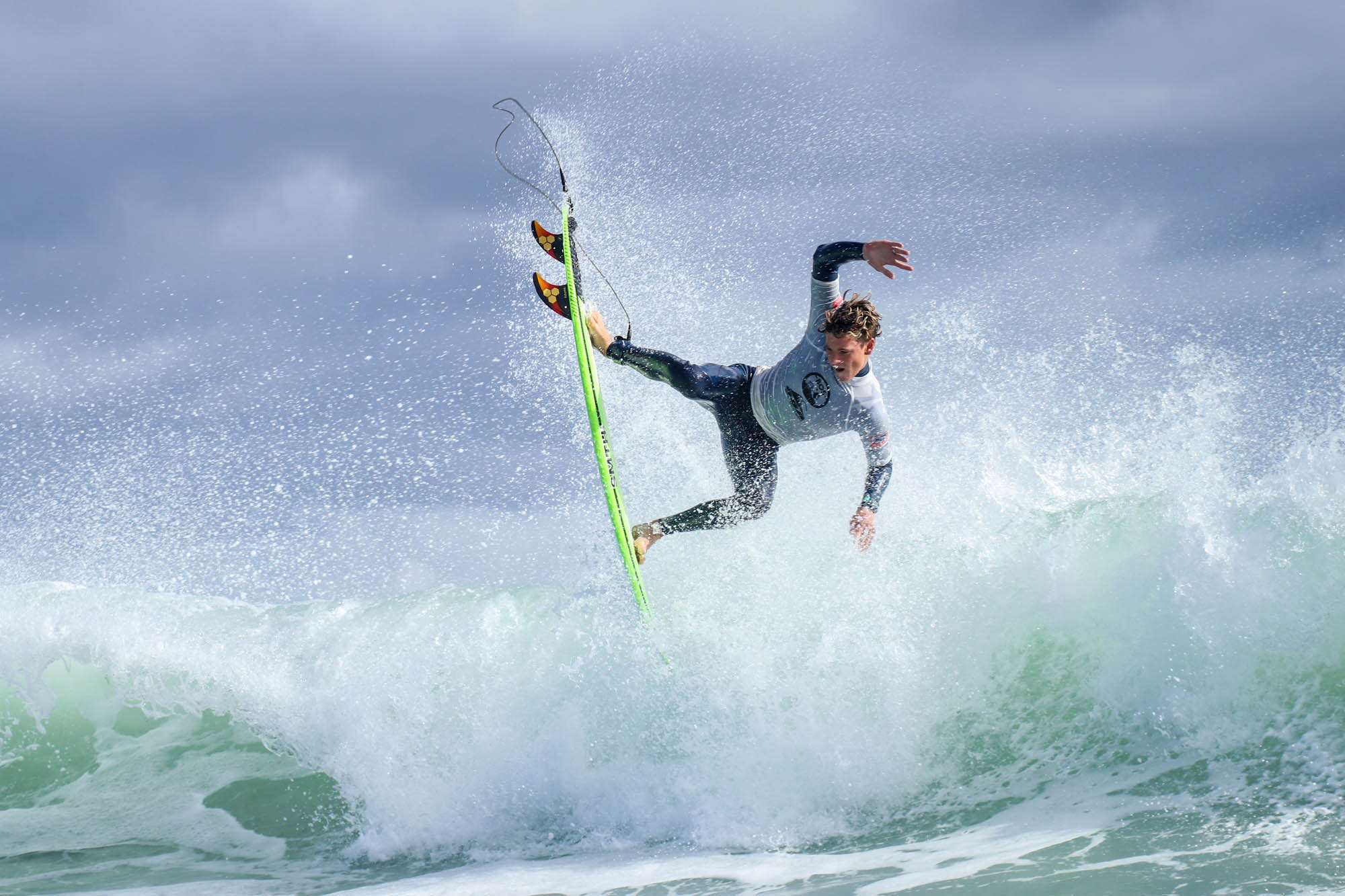 Next to impress was Mitch du Preez. If you’ve ever met Mitch you’ll no doubt take note of how polite the young lad is. His mannerisms remind us of a house cat, eyeing out the pigeons in the backyard, ready to strike. Today, he transcended house cat status, morphing into a puma as he showed everyone out there how brutal his backhand gets as he pounced his way to the first excellent score of the day. The lefts seemed to be the way to go, that is until Luke Thompson decided to throw hail Mary punts to the flats in front of the Pebbles section, pushing himself into first with some progressive surfing. Classic Luke. It was starting to look like the out-of-towners were going to run the show. Enter Cape Town’s Luke van Wyk, he wasn’t having any of it, scalping a couple of innocent lefts with his sharp blade to take a heat win. 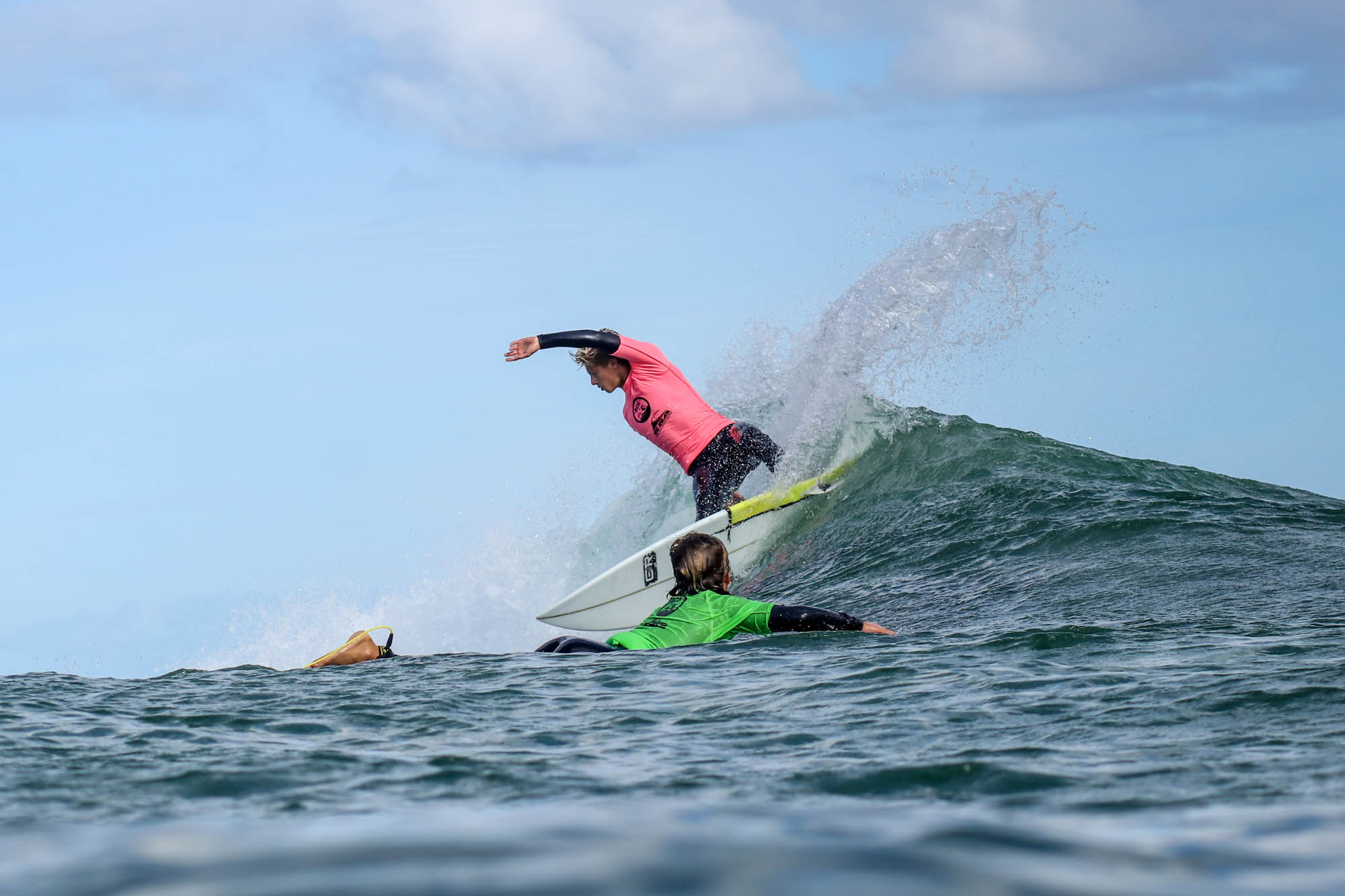 Nathan Plomaritis in the U14s blitzed through his heat, smashing those aforementioned lefts to pieces. It was clear by mid-morning that if you could handle the tricky end section shorey the judges would reward your commitment and skill. Joel Dace and Connor Slijpen had a tight battle during their heat but once Joel hammered the shore-break section he managed to squeak past the younger Slijpen who had been busy all heat.

Later in the day, Connor Slijpen opted for the lesser surfed rights producing some high energy snaps in the pocket, earning himself an excellent score catapulting himself from last to first in the dying moments of his semi. If I was sitting down, I’d have been on the edge of my seat, mate. The next semi-final saw a similar fate play out with River Gericke attacking the favoured lefts on his backhand, climbing out of 4th place to park himself top of the heat right at the death. The lesson of the day; don’t count ya chickens. 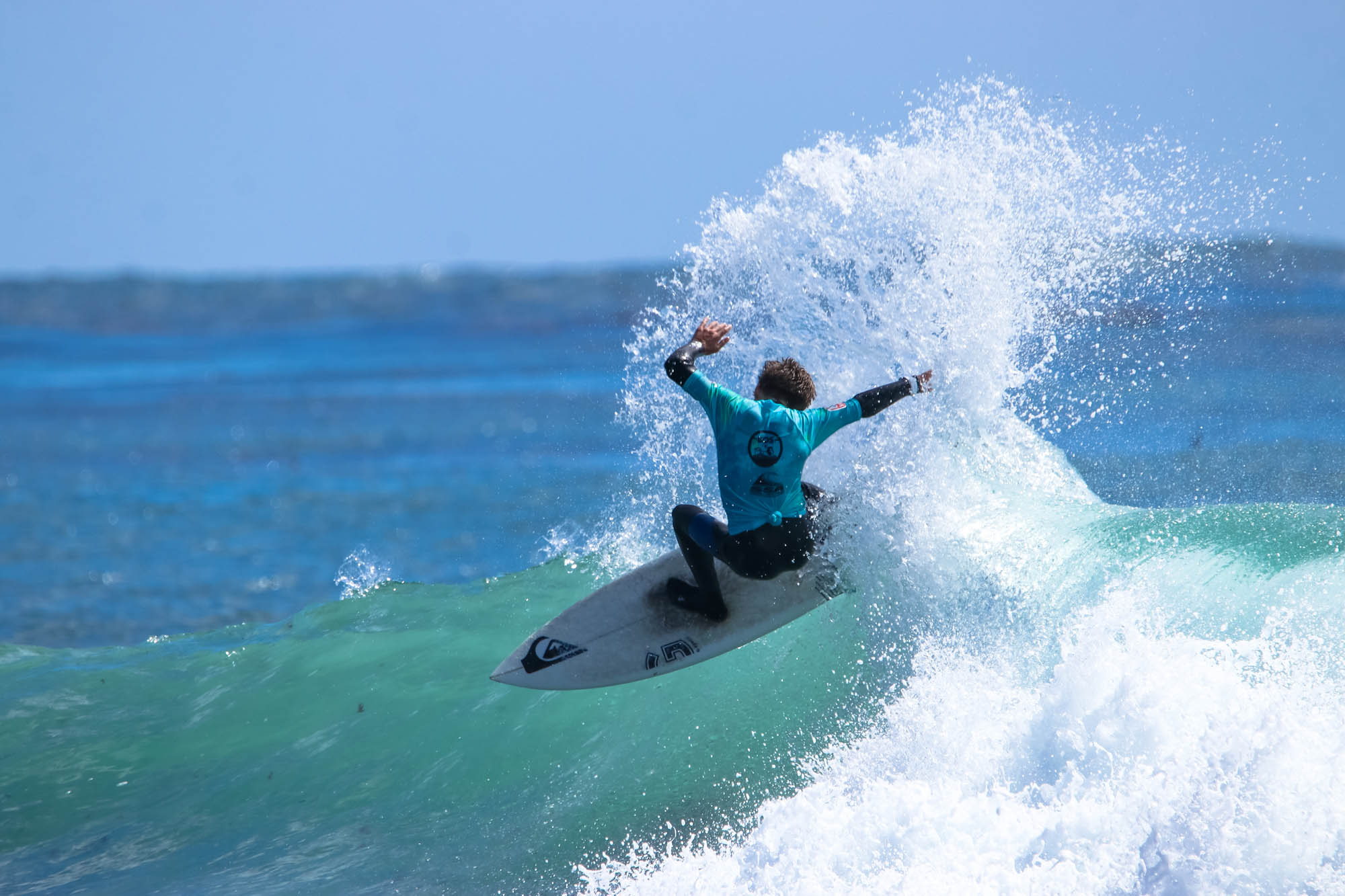 Next in the Zag highlight reel, Rory Dace in the U12s semis. Rory showed off some solid QS style “3 to the beach” surfing that had him sitting pretty for most of his heat. Remember that ol ‘don’t count ya chickens’ chestnut? Yah well Levi Kolnik sniffed out a solid set wave and threw down some critical surfing with a quality end section tag to take the top spot. In the second semi-final Ryan Schoon laid down some buttery carves through to the inside dominating his heat with a final crack at the end to seal the deal.

Ceara Knight in the U16 girls showed up, displaying some powerful surfing. Ceara going textbook hard off the bottom, hard off the top, taking on the tricky sections that nobody else seemed too keen on. The following heat saw a tight battle between Aimee du Preez and Leila Steytler going blow for blow both earning themselves a spot in the upcoming finals. 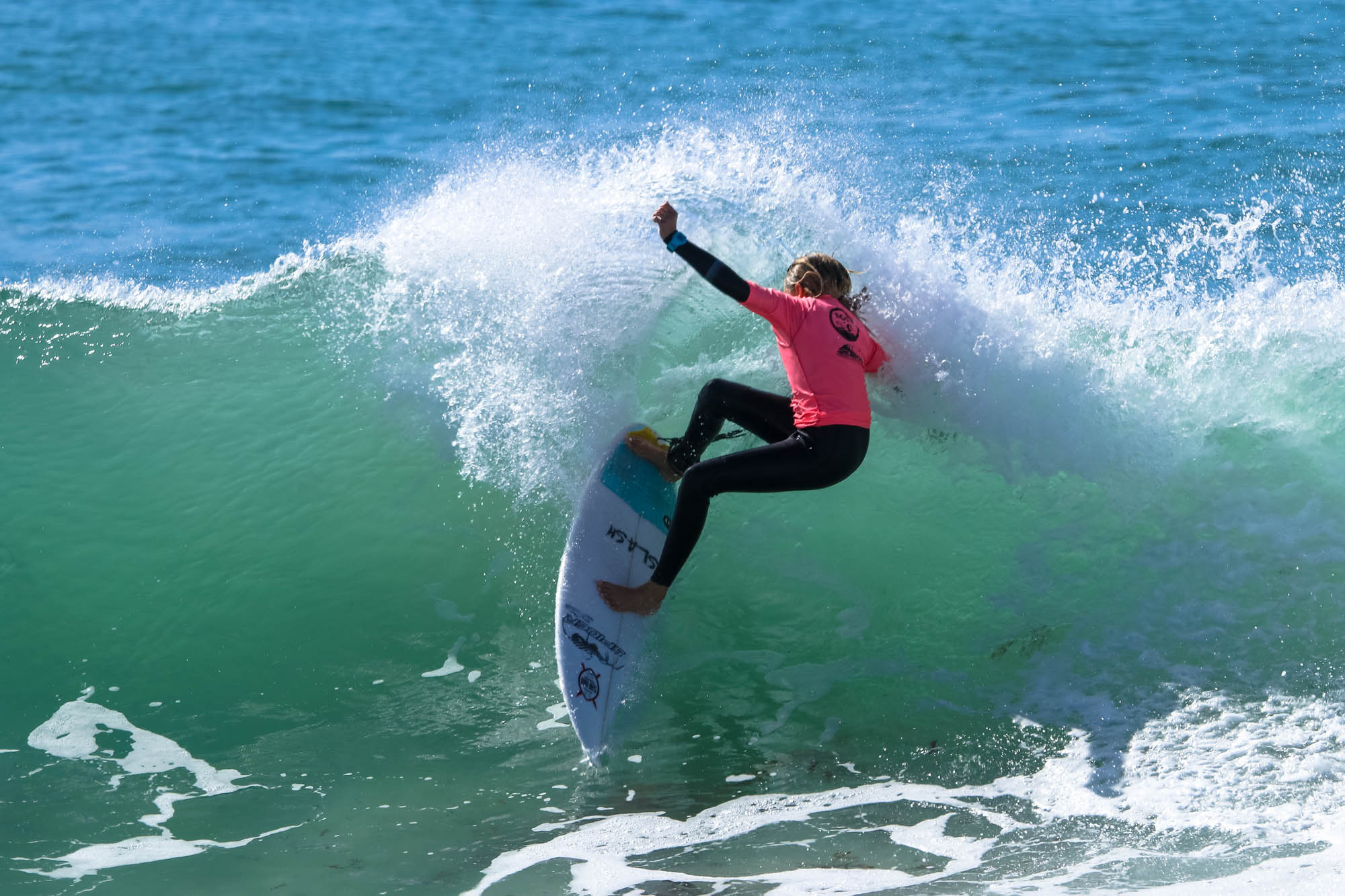 The final heat of the day saw the U12 girls final with Anastasia Venter wasting no time throwing down hammers within the first minute of her heat. Meka Loots took it to Anastasia with a solid closeout turn to put herself up into first. The East London surfer was holding onto the lead until Anastasia Venter earned herself a 7 point ride with a solid attack to take the win. Congratulations Anastasia!

That’s it for today. Tune in Sunday and find out who else takes on the hot seat!