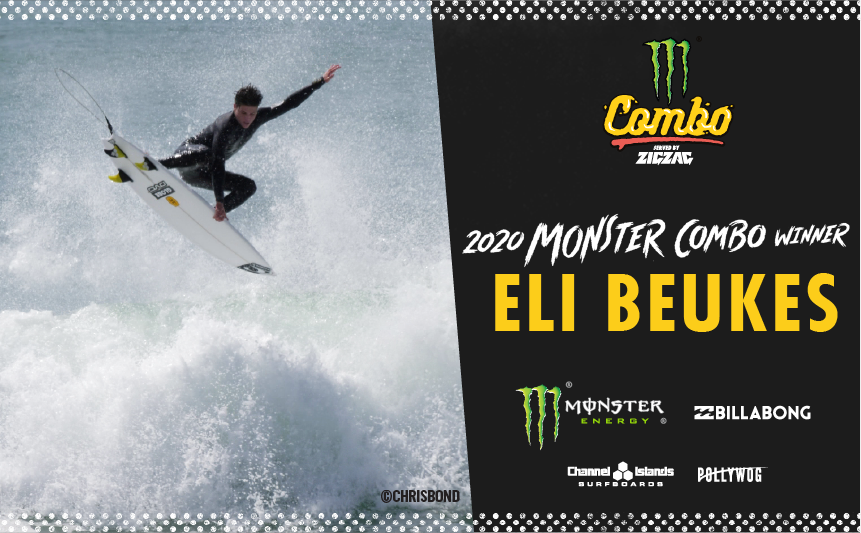 A few words of thanks before we get into it. From Zigzag’s side, we’re incredibly stoked that despite all the turmoil and tribulation that came with 2020 (Covid, lockdown, surf and booze bans, etc.) thanks to the unwavering backing of Monster Energy and solid support from Pollywog, Billabong, and Channel Islands we all pulled together to deliver a very successful, short, sharp and focused campaign, in the weirdest of times. And you the South African surfing community responded. Over the three rounds of this year’s condensed Monster Combo, we received more than 100 entries! This is even more impressive when you consider the barriers to entry are extremely high, because the surfing (and videography) on display, are straight out of the top drawer. So huge kudos and well done to all!

So now over to the judges and an inside look into how it all went down!

Monster Energy: Picking a winner out of these three is really splitting hairs, each is deserving of the title and has posted more than multiple crazy combos. In the end, Manoa and Davey’s waves were flawless (both wave and their surfing), but Eli’s wave was less so (wave wise, surfing was flawless like Manoa and Davey). It had a slight bump to it,  littered with kelp land mines. His 100% commitment to the full rote over the first section, and stomping it cleanly seamlessly transitioning into the closeout bash is our winner. Eli Beukes turned a 5 into a 9, and that’s what the combo is all about in our eyes!

Matt Bromley: This year’s Monster Combo has seriously given testament to the world-class surfing talent that we have in SA. The three monthly winners display crazy flair in the air, barrel riding, linking insane manoeuvres, variety, and power.

Between Manoa, Eli, and Davey, and all the other entries particularly in round 3, the surfing was so impressive. A special shout out to Eli and Manoa for those next level combos; the air game and flow was so good to watch.

My final vote is however going with Davey Van Zyl. For me, his entry is so mental with how he seamlessly flows from a big carve, into the pit and then uses the speed and momentum from the barrel straight into the bottom turn and lays it on the rail with no hesitation and nothing in reserve. That last carve was absolutely incredible and just blew me away after such a sick ride already. When I saw that entry, I was gobsmacked and knew that would be my winner.

His power and flow were second to none and that’s why I back him to take out this year’s Monster Combo.

The Public: With more than double the amount of anyone else (1097 votes) – Manoa Robb.

Zigzag: Let us, again, consider the finalists (above). Round 3: Davey van Zyl is a rail man. A swordsman, if you will. It’s like he’s slicing a falling watermelon with a razor-sharp katana on that first turn, small adjustment and straight into the barrel, alas it’s not that deep. But he more than makes up for that with the final turn. A study in positioning, precision and power. World-class! Round 2: Eli Beukes is a magician. In 7 short seconds, he conjures a huge punt and full rotation, way above the lip, lands super clean, and bangs it closed with a huge hack in the pocket, spurting the waves’ guts out the back. Dead. No hesitation, smooth and seamless in conditions that are anything but… Round 1: Manoa Robb is a natural. He starts with a little hop into a long draining barrel, half a bottom turn into a big closeout tail-high air reverse, ending with his fins towards the beach and riding it out smoothly in the foam, with the good sense to claim it with his fist in the sky, just like Jordy.

Inevitably, the ball hair must be split and Zag’s humble (and final) opinion is that the spontaneity and application of Eli Beukes‘ ride, pips Davey’s precise rail work and Manoa’s progressive concoction for the Monster Combo prize. Well done!!

Ladies and gentlemen, the Combo has officially shut up shop. Once again a HUGE thanks must go the way of our sponsors and to all of you who entered and took part in the Campaign.

Lastly one more MASSIVE congrats to the runners-up DVZ and Manoa with the last special mention going the way of the winner – Eli Beukes who walks away with a fat stack of R20 000 cash + his spot on an international surf trip with Matt Bromley and the Zag + Monster crew. Now that’s one way to start a year!