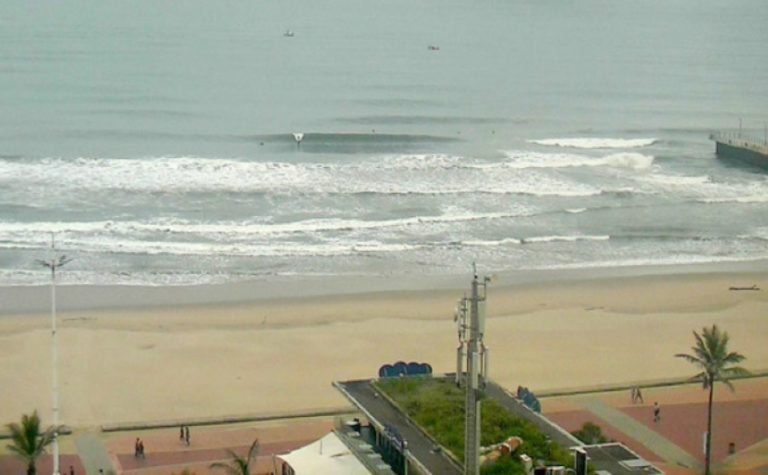 This morning a group of intrepid Durban surfers hired a boat and launched an early morning surf mission at the New Pier, via the harbour. It was a bid to have a surf without breaking any laws (in fun 3 foot New Pier bowls) and to raise awareness around the ongoing beach ban that continues to negatively impact the lives of surfers and to decimate the livelihoods of surf and other ocean-related businesses. Instigated by surf shop owner JM Tostee of Surf HQ and local lawyer Graham Taylor, and including surfers Beyrick de Vries, Ntando Msibi and John McCarthy, it was dubbed a “Surf Protest with a Difference” in a hastily put together press release from Ray de Vries, Beyrick’s dad.

Much to the envy of the city’s surfers, many of whom watched the crew shredding consistent 3ft New Pier waves, either crying into their coffee on the webcams, or masked up on the promenade. SAPS vehicles gathered around the pier to monitor proceedings, trying in vain to order the surfers to come in via the beach. However this would have forced them to break the law, and the surfers wisely refused. After about about 90 minutes, the session naturally ended and as they were heading back, they encountered the police search and rescue boat, which escorted the team back to the harbour. The WhatsApps buzzed. Would they all get arrested?

Alas, no legal precedents were set today. After some discussions and a flurry of phone calls on the jetty, the protestors were let off “with a warning”. Apparently 9 other surfers had complained and this spurred the police into action. However this makes no sense if no laws were broken. And if no laws were broken, then what exactly were they warned against doing? And what jurisdiction did the police have to launch their search and rescue boat to escort the protest back to the harbour? Once again, the justification for the current Covid Lockdown Beach Ban remains absurd and the laws around surfing remain vague, grey and largely open to interpretation.

But we all knew that. The purpose of the protest was to simply surf legally at the city beaches and to put the ongoing Beach Ban on the national agenda. Considering the presence of several news media outlets at the harbour, the “Surf Protest with a Difference” may have done just that. Come on @CyrilRamaphosa let us surf!

The Beach Ban invariably affects surf communities differently. In decentralized suburbs and small towns it can have almost no impact nor ability or desire to be enforced, so there is some wiggle room (if you’ll excuse the pun) and the surfers tend to be more chilled, because it’s not impacting their lives in a serious way. Hell, in some places, it has made previously overcrowded spots far more pleasant and bearable, for the surfers who still have access. But in a surf city like Durban, where the summer North East / South West trade winds make the Golden Mile the most viable surfing destination for quality waves, the Beach Ban serves to strictly lock up a whole city’s surf community. And while organisations like Surfer’s Not Street Children and their Point Surf Club, are feeling this most acutely, the impact on all surfer’s mental health is an often overlooked or downplayed factor.

Beyond that, and here’s the kicker, walk into any surf shop, shaping bay or surf school and ask how business is going since the Lockdown came into effect on 28 December 2020. The answer is a resounding “KAK!” across the board. Because who wants to fork out hard earned and scarce cash for a new surfboard or wetsuit that is currently illegal to use for the foreseeable future. And that’s the endless bummer!

More as this story unfolds.

*Opening image scalped from 7am on Swell.co.za

A professional surfer, Beyrick de Vries, a former street child and a lawyer will be amongst the protesters who will be in the surf this morning from 06h00 at New Pier on Durban beachfront.

The group left Durban harbour earlier this morning to get to New Pier on Surf City’s Golden Mile.

They will surf close to the shore but will not put a toe on the beach so as not to break any of the senseless restrictions.

Durban attorney, Grantham Taylor, has been tasked to accompany the surfers to help in case of wrongful arrest.

The protestors will be back in the harbour at Wilsons Wharf at 09h00 for interviews and pic opportunities.