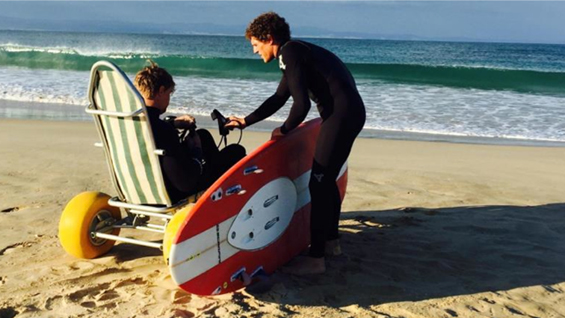 Dries Millard has been selected to represent South Africa at the first ever World Adaptive Surf Championships hosted by the International Surfing Association between 24-27 September in La Jolla, California. In preparation for this world first event, Dries, who is a T8 paraplegic, and his support team have been travelling the coastline of South Africa for 60 days – training and surfing different waves. They’ve also been promoting the sport and creating disability awareness by visiting schools and doing radio and newspaper interviews along the way. 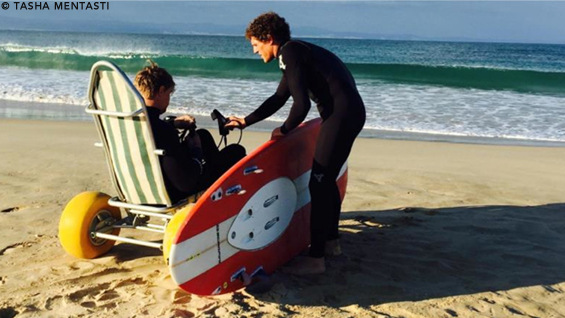 Dries and his support team started in Elands Bay, Western Cape on 20 June 2015 where they had an incident with a horse that led to the first “injury” to Dries’ new adapted surfboard. Another unlucky incident occurred in Melkbosstrand, Western Cape when Dries lost his Wavejet propulsion system (valued at R20 000) while surfing. Thanks to a helpful stranger who found the Wavejet washed up with the high tide in the same day, Dries was able to use it but needed to send his board back to South Coast Surf Boards to get repaired. Dries surfed the Kommetjie valley with Dennis Scarfini from Scarfini Fins as well as braving the icy cold Atlantic ocean having surfed both Witsand and Crayfish factory. Moving along the Garden Route, Mosselbay cost Dries a broken rib and a crushed ego. Wiping out on the rocks at Outerpool in Mosselbay was a great learning lesson for Dries and the team but Dries needed some time to heal. During the two month Adaptive Surfing Roadshow Dries surfed with huge schools of dolphins at Nahoon Reef and witnessed Mick Fanning getting greeted by a shark at the WSL Jbay Open. They swam with sharks in open water with Walter Bernadis and saw how curious and easy going sharks can be. The team helped out at the first adaptive surf event in KZN and they witnessed the first ever over 60 division at the 50th South African Surf Champs in Richards Bay.

Being on tour, training and surfing new waves every week for the past two months, Dries’ surfboard arsenal has taken on some serious damage and repairs. Unfortunately sometimes a board actually breaks. The brand new surfboard that was specially made for the ISA World Championship event broke in the first training session in Scottburgh, KwaZulu-Natal. With his other two boards in critical condition, Dries desperately needs a new surfboard. Along the journey it became clear that being a paralyzed surfer requires a little helping hand getting in and out the water, loading boards and equipment. Dries has teamed up with John-Michael Nida from the Christian Surfers Organization. John-Michael is originally from Texas, so Dries will have a local guide on that side and a vital helping hand throughout the trip. The hard reality is that for Dies to represent South Africa at the World Adaptive Surfing Championships, he will need to raise the necessary funds for his new surf board, a flight ticket and registration fees for John-Michael, accommodation and travel for the duration of their stay in California during World Champs and all of these costs needs to be converted to US dollars.

In order for Dries to get a new surfboard to compete with at world champs, he will need to raise R10 000. And for John-Michael to assist Dries in California, they will need a further R25 000. Their travel and accommodation for the duration of the ISA World Championship event will set them back another R50 000. This is a call to action to help in getting Dries to represent South Africa in this exciting new World Championships. Extreme Abilities is an Article 18 registered non-profit organisation and any funds donated towards getting Dries Millard to world champs can be tax deductible.

A thank you needs to go out to all the sponsors who made this tour a reality. The vast amount of experience that Dries gained in adaptive surfing is invaluable and he will set the standards at the world champs. Reef SA hooked Dries up with a brand new wetsuit for the tour. Scarfini Fins kitted out Dries’ boards with their best range of surfboard fins. The Challenged Athletes Foundation (CAF) has sponsored Dries with funding for his Wavejet propulsion system and airfare to the World Adaptive Surf Championships. South Coast Surf Boards has helped Dries in breaking many boundaries in adaptive surf and greener surf technology and have sponsored him two surfboards for his adaptive surf road show.

Protea Hotels King George and The Richards as well as Garden Court PE and Hemmingway’s from the Tsogo Sun group generously accommodated the team on their various stops along the way. Duferco Steel Refinery in Saldanha Bay made e generous financial contribution. A very special thank has to go to NTT Volks Wagen East London for generously making a brand new VW Amarok double cab available to the team for the entire duration of their tour and to top that, Frontline Underwriting Managers for ensuring the Amarok during the Adaptive Surf Road Show. A big salute to Charles Olsen, better known as Skalakie for dedication two months of his time to help Dries on the entire Adaptive Surf Road Show.