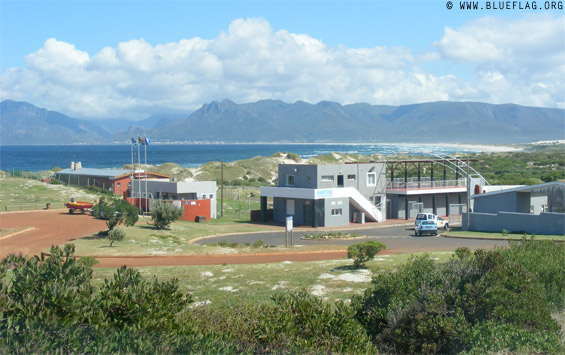 Hawston’s blue flag beach saw a close encounter of the unwanted kind this past Saturday.

A Cape surfer was left ‘unscathed but in shock’ following an encounter with a shark at Hawston Beach this past Saturday (16 March). His board, however, wasn’t able to avoid the shark’s pointy teeth.

Zag was alerted to the attack by Megan Smith who posted the following message to our Facebook page:

‘Surfer attacked at Hawston Beach, near Hermanus on Saturday 16 March 2013 round 3pm. Luckily he is unscathed but in shock. Leash was severed and there are teeth marks in the board, about 32cm wide, probably a great white around 2m in length. A local surfer was contacted about a board floating in the bay, he swam out and fetched the board, only to find out it belonged to the guy that was attacked. This was only after the attack had occurred, and without knowing.’

The local surfer who retrieved the board, Llewellyn Poole, later returned the board to the surfer involved in the encounter – who was already back in Cape Town, but happy to drive back to fetch his ‘lucky’ board.

This encounter at Hawston follows closely behind another attack at Port St Johns’ Second Beach, when on Sunday 3 March swimmer Fundile Nodumla managed to fight off a suspected Zambezi shark that was attacking him. He was rushed to Nelson Mandela Academic Hospital in Mthatha and treated for his wounds.