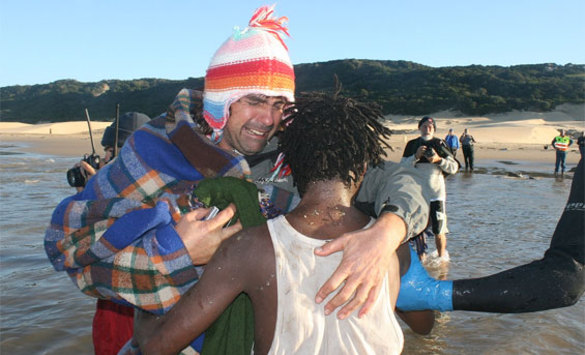 Boat skipper and Yellowsands surfer Mark McArthur broke down in tears when he was finally reunited with his crew. Picture: David Macgregor/Daily Dispatch

In the early hours of Sunday morning, about 7 nautical miles east of Port Alfred, ten fisherman aboard a 45ft chokka boat were facing danger in huge seas. In a double dose of misfortune their vessel was then struck by lightning. Skipper Mark McArthur, a Yellowsands local, hurried below deck to assess the damage caused by the lightning leaving another member of the crew at the wheel. Their craft was broadsided by a large wave and then capsized.

In the ensuing mayhem McArthur managed to escape the waterlogged engine room and free himself from the overturned vessel. He then swam ashore and walked 4km to the nearest house to alert the authorities. The crew member who was in the wheelhouse during the incident was lost overboard, while the remaining eight members of the crew were trapped inside the sleeping quarters of the upturned hull which eventually ran aground in the surf zone.

Thanks to the quick response of the NSRI, the eight trapped crew members were rescued from the hull of the vessel. Unfortunately the lifeless body of the crew member who was lost overboard had already washed ashore by the time the NSRI arrived.