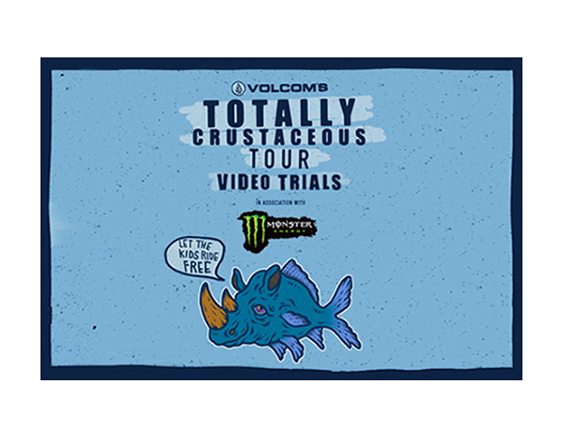 Are you interested in a free trip to California to surf Trestles and potentially scoop the big bucks? Find yourself a filmer and charge up those batteries. We’re calling on South Africa’s top junior surfers (20 and under) to enter “Rhino-fish”, Volcom South Africa’s Totally Crustaceous Tour Video Trials. It doesn’t matter who filmed your wave, could be your mum, your dog or ya girlfriend, just get your (one-minute video clip) entries, and votes, in.

WIN A TRIP TO SURF TRESTLES WITH VOLCOM SOUTH AFRICA, IN ASSOCIATION WITH MONSTER ENERGY AND ZIGZAG SURFING MAGAZINE!

Keen on a free trip to California to surf Trestles and potentially scoop the big bucks? Enter Volcom South Africa’s Totally Crustaceous Tour “Rhino-fish” Video Trials in association with Monster Energy and Zigzag Surf Mag and you could win big.

This is your chance to win a trip to California plus a shot at a stack of cash while competing at Lower Trestles, one of the most ripable waves in the world! Yep, this is a once-in-a-lifetime opportunity which kicks-off online 1 April 2016. No jokes!

Volcom South Africa’s TCT “Rhinofish” Video Trials in association with Monster Energy and Zigzag Surfing Magazine will decide which South African surfer, under 20 years of age, will earn a spot in Volcom’s 2016 Totally Crustaceous Tour Global Championships to be held at Lower Trestles, 14th-17th June. With $30,000 USD in prize money on the line and international recognition, this is a chance to put yourself on the map!

To get in the running you’ll need to submit a one-minute video clip showcasing your skills. Just make sure it’s a sick edit, because not only does a well-produced video catch the attention of the public and judges too, but the best-edited clip (not necessarily the winner) will claim some extra prizes as well–namely a R5000 hamper from Volcom that will go to the video producer.

There’s a lot on the line, so start planning those entries and get filming to make sure your clip is ready when the competition kicks-off on April 1st, 2016. The winner will be decided by a judging panel consisting of representatives from Volcom and Zigzag, while 1/3rd of the final vote will also be decided by the public. So be sure to share your clip to get those eyes on your entry (and, hopefully, some votes).

Some Fineprint:
• Featured surfers must be residents of South Africa and have a valid passport.
• Entrants must to be under 20 years of age as of 1 August 2016.
• Entries are limited to one edit per rider, so make sure you’re happy with your edit before submitting.
• Videographers looking to enter clips need the permission of the rider featured.
• Don’t try trick the judges with clever editing. We’ll be looking for completed manoeuvres, so be sure to include those clean landings.

Guidelines on how to submit your video and all the terms and conditions for the Volcom TCT Video Trials will be available on the official contest portal at zigzag.co.za/volcomtct2016 when it goes live on 1 April 2016. Read these thoroughly to ensure your entry qualifies. This is just a heads-up to get your sickest video clips together.