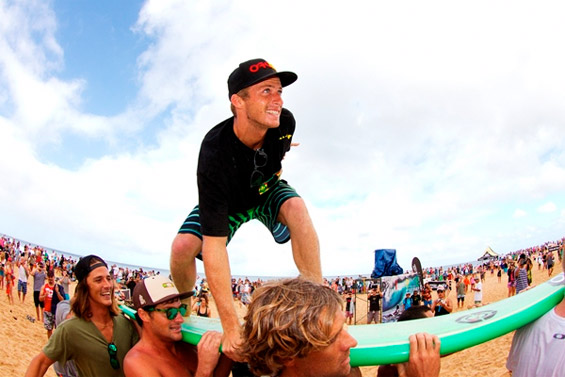 Sebastian Zietz (HAW), 24, surfs up the beach following his clinching of the 2012 Vans Hawaiian Triple Crown of Surfing.

BANZAI PIPELINE, Oahu/Hawaii (Sunday, December 9, 2012) – Kauai’s Sebastian Zietz (HAW), 24, has won the 2012 Vans Triple Crown of Surfing Title (an ASP Specialty Series) by advancing to Round 3 of the Billabong Pipe Masters in pumping six-to-eight foot (2 metre). Zietz wins a record $100,000 bonus in recognition of the 30th anniversary of the Series, hydrated by vitaminwater, as well as a $30,000 Harley Davidson and a $10,000 custom Nixon watch. Zietz eliminated ASP WCT surfer Travis Logie (ZAF), 33, to move ahead.

Adam Melling (AUS), 27, was the only surfer able to overtake Zietz, but the Australian fell to Miguel Pupo (BRA), 19, leaving Zietz atop the Vans Triple Crown rankings. The massive victory for Zietz marks his first Vans Triple Crown Title, making him the first Kauai surfer to win the prestigious Hawaiian Series trifecta since the late Andy Irons (HAW).

Zietz put together an incredible run during the ASP Specialty Series, winning the Reef Hawaiian Pro to qualify for the 2013 ASP WCT. He remained consistent at Sunset Beach, finishing 3rd at the Vans World Cup of Surfing and so far has secured a Round 3 berth at the Billabong Pipe Masters.

“I’m super stoked,” Zietz said. “I’m just doing it for everyone in Kauai and everyone in Hawaii. Thanks everyone who comes down and watches us, you’re the reason we have a job. Thanks to Andy (Irons), you’re the one giving me the power. I’m so stoked. I don’t know what to say. It’s just amazing. I’d like to thank everyone who was a part of it. So many people have helped me throughout my life. The list goes on and on, you guys know who you are.”

Zietz went on to deliver the upset of the Billabong Pipe Masters later this morning, eliminating ASP WCT rookie and local standout John John Florence (HAW), 20, in their Round 3 match.

“I kind of wasn’t ready for it. I was still celebrating it with thwo minutes left. John my favorite surfer at the time. He missed that first one and I got priority from him. He was looking at that backdoor one, so I knew it must have been good. I saw him fall on that last one and it was lucky for me and unlucky for john. I’m still focused on the contest, this all hasn’t really sunk in yet.”