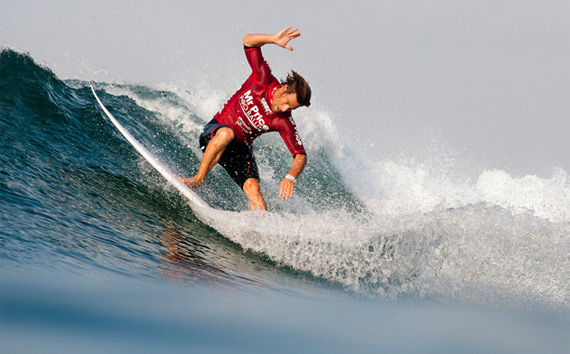 South African surfers asserted themselves against many of the world’s best with four out of five advancing through the Round of 96 at the ASP Prime Mr Price Pro Ballito on Tuesday July 2, 2012.

With clean, although at times inconsistent one-metre waves peeling through the Willards Beach lineup, positioning proved critical for surfers looking to advance on the opening day of competition.

“It was a really tough heat, I think everyone had a pretty good score before I even took off on a wave,” Logie said. “I was getting a bit stressed out towards the end but I managed to get a set wave followed by another good one on the inside and pretty much held the lead to the end.”

Renowned for his lightening fast backhand snaps, the explosive goofy-footer (right-foot forward stance) was one of a handful of goofy-footers to win their heats on a wave that more often than not favours natural-footers.

Wildcard surfer Beyrick De Vries joined Logie in using local knowledge to out-position his opponents and completed the first of the event’s aerial reverses, to advance into the next round.

“Ballito is pretty close to home, so I feel really comfortable out there,” de Vries said. “I’ve struggled to get into Star events this year so earning a wildcard from the ASP was a massive help and I’m really stoked to get through.”

Shaun Joubert (Mossel Bay, ZAF) found himself pitted against a trio of hungry Australians keeping himself in contention with a combination of power and new school maneuvers, advancing in second place behind heat winner Nathan Hedge (AUS).

“It was tough out there, there weren’t many waves but when they came, they were fun,” Joubert said. “I’ve been slugging away on the Star Tour all year so it’s great to have an event at home. My aim is just to get on that World Tour as soon as possible.”

Former WCT campaigner Bernado Miranda (BRA) emerged as the day’s standout making the most of the deteriorating conditions to post the highest heat score of the day a 17.10 (out of 20.00).

“The conditions were ok, it was windy but there were still a few fun rides and if you got a good one you could do three of four turns,” Miranda said. “I had some very experienced surfers in my heat, so I just tried to pick the best waves.”

Miranda dominated the scoreboard with a pair of 8.17 and an 8.93 (both out of ten) rides eliminating Charles Martin (GLP), Brendon Gibbens (ZAF) and ASP World No. 18 Brett Simpson (USA).

“I’m so happy to start this event with a good performance,” Hermes said. “This is my third year in Ballito, I love this place, it has beautiful waves with a lot of power and I’m happy with my result.”

Pipeline specialist and big wave surfer Torrey Meister (HAW) proved just as skilled in smaller waves, keeping his surfing above the lip to complete one of the biggest air- reverses of the day, advancing with an excellent 8.00 along with Jadson Andre (BRA).

Former Elite tour campaigner Nathan Hedge (AUS) enjoyed a welcome return to competition after an 18- month hiatus, earning a well-deserved victory during Round 1.

“I’m so grateful to be back in a Prime event,” Hedge said. “It’s just incredible to be back surfing this tour again.”

Heats 1 – 9 of the Round of 96 were completed before onshore winds and a high tide deemed conditions uncontestable forcing organisers to call the event off until tomorrow.

While the action in the water was put on hold, the Mr Price Pro Ballito Festival continued to pump throughout the day with everything from skateboarding to BMX demos, live music and more keeping holiday makers entertained in the Festival area.

The next call will be at 07h00 (local time) tomorrow morning for a possible 07h15 start.