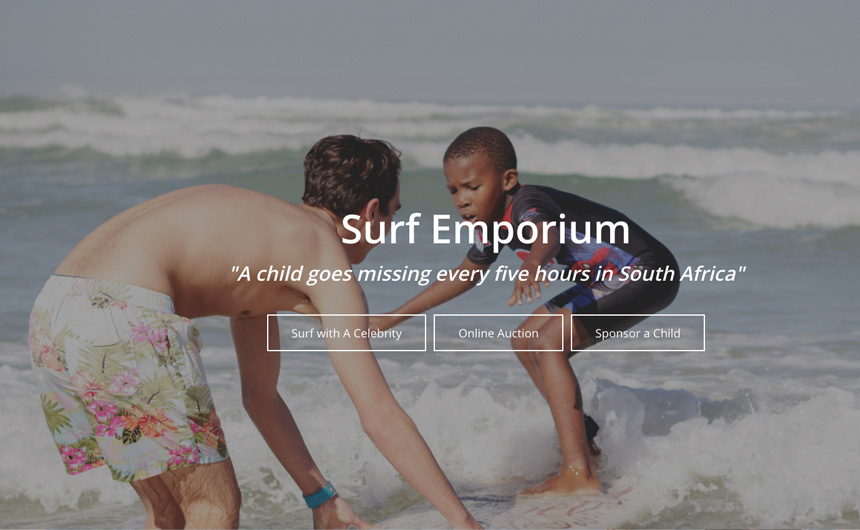 A child goes missing every five hours in South Africa. Trafficking in children is a global problem and according to UNICEF and World Concern it is estimated that as many as 1.2 million children are being trafficked every year. Missing Children South Africa (MCSA) is a non-profit organization that assists the SAPS in tracking down missing children. This year, MCSA have put together a great surf initiative to raise funds and create national awareness about the safety of our children.

Surf with your idol, bid for a signed Julian Wilson surfboard, or sponsor a Waves for Change grom to shred with their favourite celeb – whatever lights your fire, you can put your crown towards an important cause on 10 September at Surf Emporium, Muizenberg. Full details below! 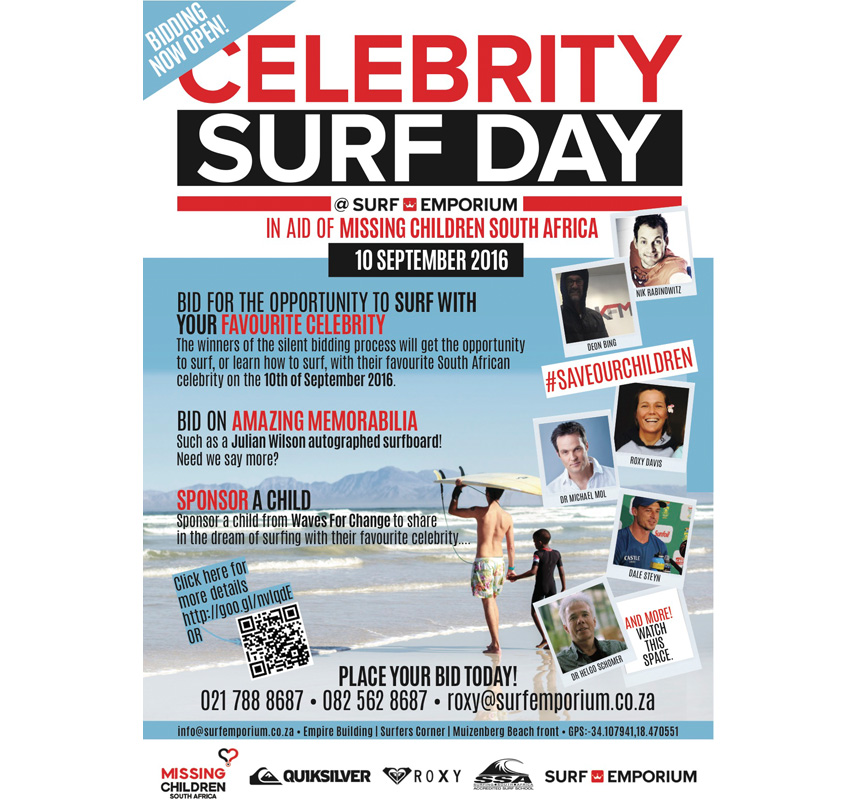 On the 10th September 2016, Surf Emporium Muizenberg will be hosting a Celebrity Surf Day at Muizenberg beach in Cape Town where all funds raised will go to Missing Children South Africa (MCSA). The Celebrity Surf Day will contribute towards the annual fundraising for MCSA and aims to raise at least R50 000 in support of its growing profile. The Celebrity Surf Day will be raising funds for MCSA in three ways: 1) allowing people to partake in a silent bid for a surf lesson with their favourite South African celebrity. 2) public participation in the online memorabilia auction and 3) sponsoring a child from Waves for Change Surf Therapy programme, affording them the opportunity to learn to surf with their favourite celebrity.

Celebrities that have pledged their time include Dr Michael Mol, Dale Steyn, Nik Rabinowitz, Roxy Davis, Deon Bing, Dr Helgo Schomer and Miss South Africa 2nd Princess, Tayla Skye Robinson. Surf Emporium will be providing surfboards and wetsuits as well as their warm welcoming facilities on the day. “The cool part of the diverse group of celebrities is that they appeal to a diverse audience so that people from all backgrounds can bid on the celebrity that best resonates with them.” says Roxy Davis, 8 times South African Surfing Champion and founder of Surf Emporium.

The shocking reality is that a child goes missing every five hours in South Africa, according to figures released by the South African Police Service Missing Persons Bureau for 2013. This adds up to a total of 1697 children. Fortunately, according to Missing Children South Africa’s statistics, 77% of children are found. Sadly, this still leaves us with at least 23% of the children not being located. “This event will not only boost our funds but it will help us educate parents and children about the shocking statistics” says Rose Mac Kinnon, National Coordinator of MCSA.

The online auction will include limited edition memorabilia such as; the surfboard of Julian Wilson, currently ranked 9th on the Championship Tour, provided by Mr Colin Fitch, Regional Operations Manager at The World Surf League.  As well as Dale Steyn’s Protea sports top signed by the Protea team and so much more.

MCSA is a non-profit organisation that aids the South African Police Services in locating missing persons across the country through awareness campaigns. Silent bidding will be open at 7am on Thursday 18th of August until 7pm on Sunday 28th August 2016. Winning bids will be announced on the evening of 28th of August 2016. Bidding is unlimited, so bid as many times as you wish and remember to keep an eye on the website for updates.