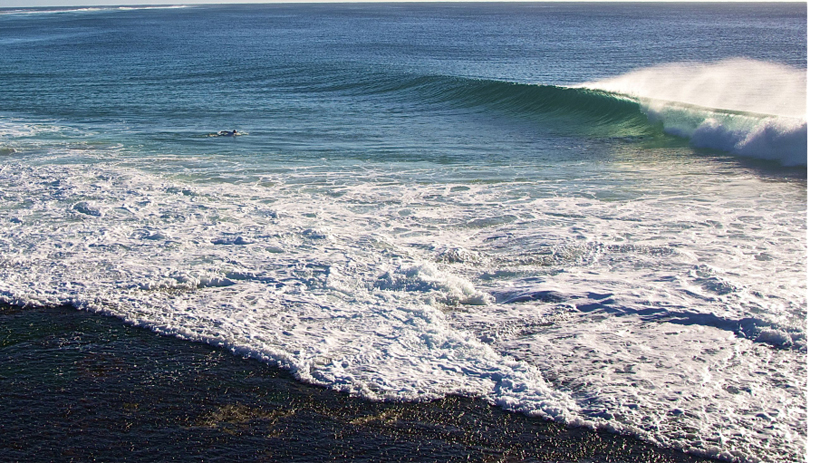 I learned to surf more than ten years ago and instantly fell in love with the overwhelming feeling of adrenaline rushing through my veins after charging down a perfect blue wall of bliss. Over the past 10 odd years, I’ve been surfing at the same surf spot, with the same crowd. I’ve made a couple of chomma in the water and enjoy the conventional weather conversations that do the rounds out at backline.

At this stage, you may be thinking that I live near the ocean and have a local surf spot. Well, this is where it gets interesting – I’m actually a born and bred Pretoria oue. In fact, I still live and work here and unfortunately, as a result, I only get the opportunity to surf once or twice a year, mostly during the holidays. However, for a “Vaalie”, I think I surf pretty decent. 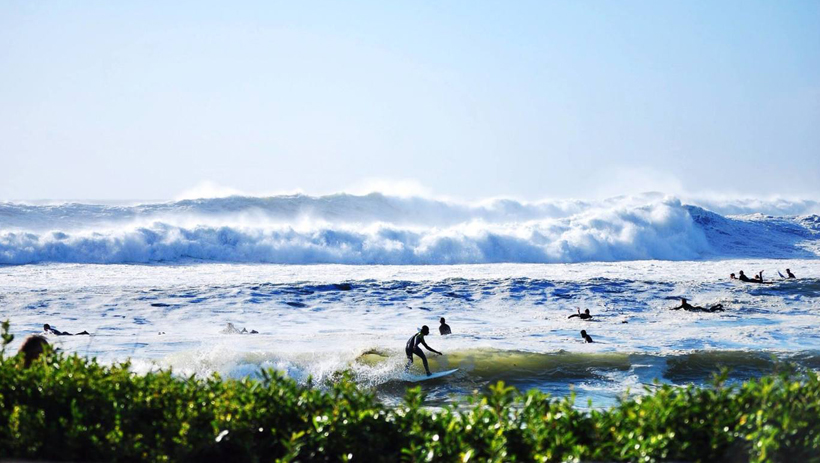 Over the years, it became obvious who the locals of “my” local surf spot were and damn did they make sure you knew it. With this being said, it’s never bothered me, I know the rules and I have nothing but respect for them and the guys in the water. In my eye’s I am like a younger kid, an outsider, playing on the older kids’ playground, what else could I expect.

The strange thing about it all is that over time, the locals’ behaviour towards me in the water slowly changed. As the years rolled by, I received more howzits, awehs and welcoming smiles from the local lads. Conversations got deeper and I got to know the guys behind the waves and surfing became more fun. This story revolves around a surfing experience with one particular local this past holiday. For brevities sake, I will name him ‘Mr. Local’.

This past December I was driving to a popular right-hand point break at my local surf spot. Conditions were good for summer, with a good amount of swell and a light offshore wind, I knew there would be a wave or two. As I drove over the hill, turning right onto a dirt road, I saw a guy on his surfboard carving white and blue lines across the face of a 3 – 4ft wave, like an artist expressing himself on a blank canvas. After watching wave after wave being ridden by an overcrowded group of aquatic Picasso’s, I decided to let this one go. 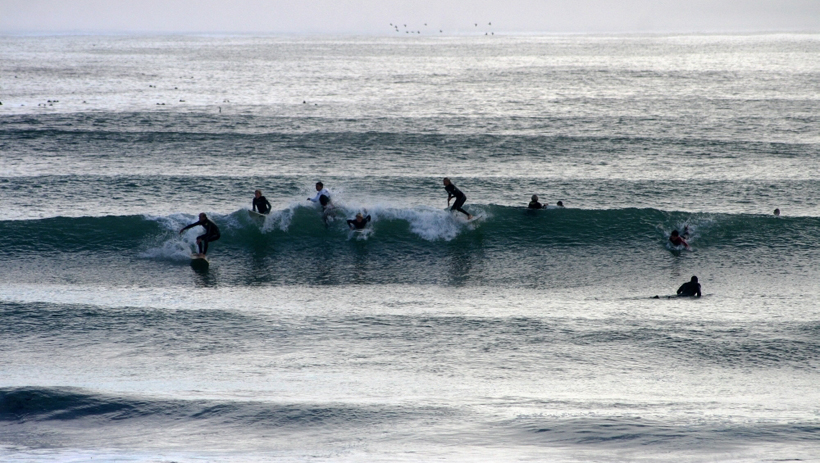 Just before turning back and heading home, I remembered the locals always talking about other surf spots further down the road. These spots are hardly surfed, due to their inconsistency and gnarliness. Yet, I was curious and drove around the small cape to the end of the road in a cul-de-sac. There was one bakkie parked on the edge of the cul-de-sac and, to my surprise, sitting on the back of the bakkie was a guy busy prepping his board.

I parked next to him, rolled down my window and casually asked if he was going to surf the point break. His voice didn’t exactly radiate enthusiasm when he simply replied that he was “thinking about it.”

A couple minutes passed before two more bakkies pulled into the cul-de-sac and parked next to us. To my relief, Mr Local got out of his bakkie and greeted me with his usual enthusiasm and a child-like grin he always seemed to carry. I told Mr Local that I had never surfed the point break before, but had heard some stories. He told me that he grew up surfing this wave, which was hardly ever surfed by anyone other than locals. He invited me to join them and gave me a last-minute word of caution that the paddle will be tough. I’ve been a swimmer all my life and didn’t give it an extra second of consideration.

As we kicked it across the beach toward the paddle-out point, I met the other 3 members of Mr Local’s crew. I was feeling excited and anxious at the same time, it was like I had received my golden ticket to explore the sweet treasures of Mr Local’s wave factory. I knew that my “Vaalie” surfer status would be tested that day. 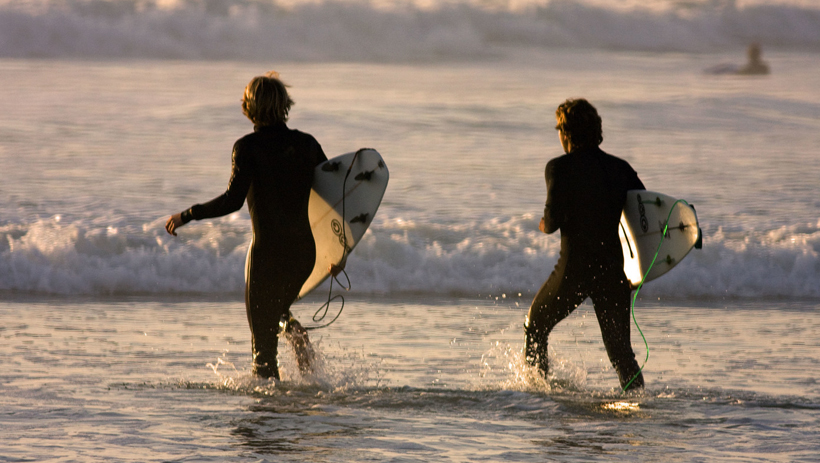 As we paddled out I finally felt a sense of relief to be in the water again. I was able to duck dive and clear the first wall of white water. The second wave’s whitewash galloped nearer, this time a bit bigger.  After ducking the next wave or two I realised I was caught in the rip and my paddling effort quickly doubled as I watched the next wave growing in the distance.

A couple strokes later the wave was towering over me. Soon after I experienced “that” feeling, the feeling all surfers experience once in a while – it’s almost too hard to explain. In a split second, all Pythagorean calculations had been made and I knew that I can’t paddle fast enough to get through the wave. The shadow of the wave crept over my face, inconsolably, I waited for the inevitable.

After receiving the unceremonious backhand from Mother Nature, I was hurled around like a rag doll, held by an angry kid throwing a tantrum. Finally, I managed to come up for air. I looked around and realised that I was dragged about 20 meters to the left in the rip. Exhausted, I got out and walked back to the paddle-out point.

I paddled in for round two but was quickly met by more merciless abuse from Mother. Again, I was swept away by the rip and retreated back onto the beach. With my tail between my legs, I slowly took the familiar path, back to the familiar paddle-out point. 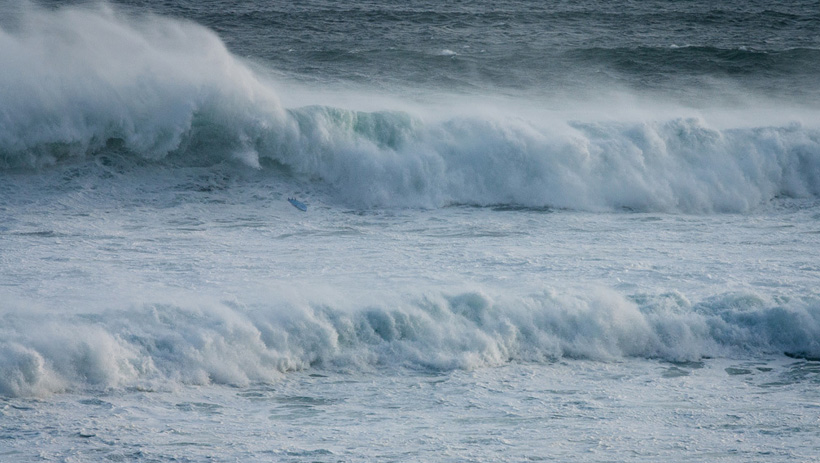 I stood there with the bitter taste of salt in my mouth, drenched in disappointment while looking on at Mr Local destroying the lip of a blue beauty. I stood there contemplating how I was going to explain, or rather lie, to the locals why I wasn’t gracing them with my presence.

After standing there for what felt like ages, one of the locals had surfed his last wave and triumphantly rode the whitewash all the way on to the beach. He walked towards me smiling as if he knew what had happened and how I was feeling.

“So, ek sien die waves het jou gebliksem…” he said in a jolly manner. I told him what had happened and after a sincere laugh of understanding, he gave me a few pointers and told me to time the paddle better. After receiving his local wisdom, he blessed me with a good luck and went on his way. At that stage, I was quite tired, drained and not too excited for round three. But in life, there’s always that one thing keeping you from quitting, it’s all about one tiny word – “trots”.

I was determined to conquer this wave and decided to give it one last try. As the final wave of a set was breaking, I ran into the water jumped on my board and started paddling as hard as I could. After easily duck diving a few whitewashes, I made it through the break. After struggling and being slapped around for almost an hour, I was behind the break, effortlessly gliding through the water, on my way to the take-off point within a couple of minutes. What an anti-climax, I silently thanked the local for his advice and with a sense of relief paddled on. 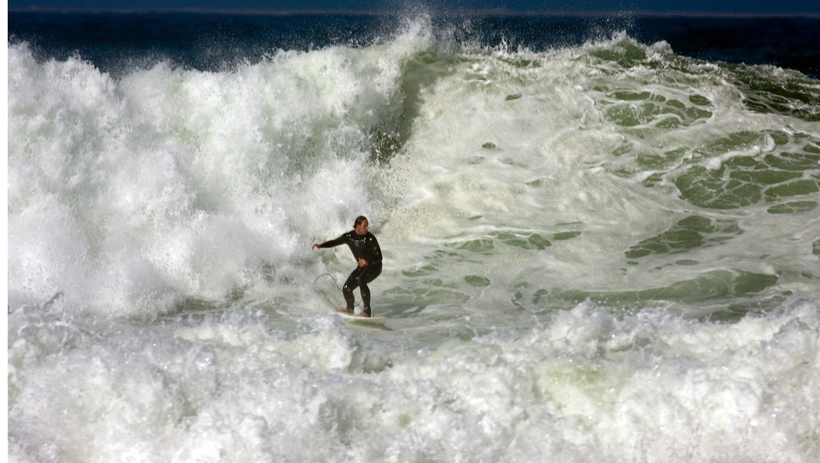 Finally, at the take-off point, Mr Local and the others welcomed me. After spending some time in the water and sharing a conversation with Mr. Local, I caught my first and only wave of the day and rode it all the way onto the beach. I had a smile wrapped around my head, not because of the wave I rode, but for the entire experience that morning. Everyone got out and we made our way back to our cars.

While walking back, Mr Local turned to me and said “Ek’s moerse beïndruk, well done”. Now, I don’t think he had realised the impact of what he had said, but for me – someone who surfs mostly once a year and who regards himself as a weekend warrior of some sorts – I felt a sense of camaraderie. At this point, I had a new appreciation for localism and what it’s really all about.

This was a memorable surfing experience and I hope this story will inspire surfers across the country to promote a healthy culture of localism and surfing. One thing is certain, if you respect the locals, they’ll respect you.