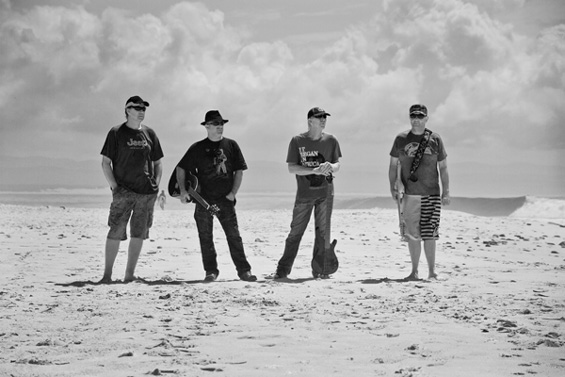 Rockin’ Out with Robin Morris

Music and surfing go hand in hand. For those lucky enough to be gifted at both, most would agree that the one inspires the other. Given this complimentary relationship, we’ve been introducing you to some talented ocean-inspired artists in our Surfer’s Ear features. And this week we dip into the life of Amanzimtoti-born surfer and musician, Robin Morris, who has jammed with the best of ’em at his personal recording studio at home in J-Bay. 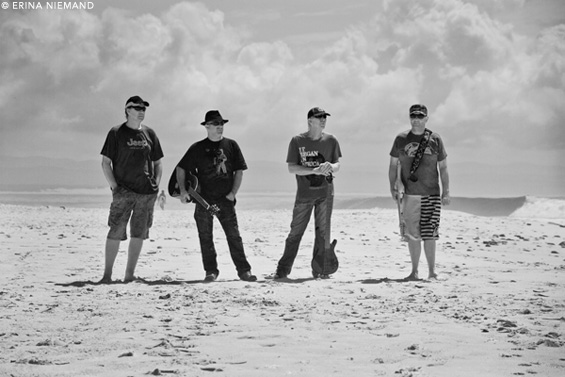 We asked Robin to tell us more about his musical journey. His story continues below:

I’ve been surfing all my life and grew up on the KZN south coast in Amanzimtoti. Frankie O, Gordon Turnbull, Mike ‘Rose’ Roscoe, Craig ‘Elsie’ Els and Gary van Wieringen were some of our grommets, along with my boys, Brent Morris and Craig Mackay. My wife, Irma and I started ‘Surf Obsession’ with the late Errol Hickman in Durban’s Brickhill Road back in the 80s. I also ran an ad agency in Durban called Dynamics Advertising and Design. I started off as partners with Burn’s (Mike Burness) step mom, Gail Burness and Mike Wilson, so I spent all my young years on Durban turf.

Then in the mid 90s, we sold everything and relocated to J-Bay. We started Quiksilver in J-Bay with Arthur Limbouris and Barry Wolins as our partners. During this time, Toast (Pierre Tostee) brought around a very young Kelly Slater to our house on the beach (overlooking Tubes) and asked if he could stay with us for the July WCT event, which he did. The following year, Kelly came back to us but this time accompanied by Taylor Knox, Pat O’ Connell and Shane Dorian. The four of them stayed with us every July thereafter for about ten years until we sold the house to Brandon Kerzner. As you well know, Kelly is the only one left on the tour and he still stays in the beach house, but with Brandon and family now. 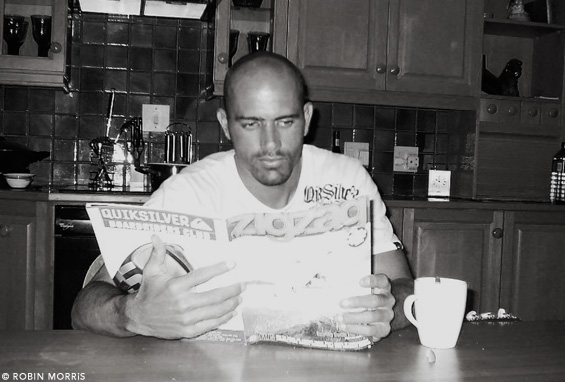 Kelly paging through Zigzag while staying with Robin in J-Bay during the WCT stop.

We had some awesome times over those ten years with the crew, and some incredible freesurfs. On one occasion, it was a blinder onshore day and I was jamming with Kelly, Curren, Machado and Taj Burrow’s dad in my downstairs studio. It got a little warm inside, so we moved outside onto the deck. I think Barry Tuck and Grant Ellis were also with us (he grew up with my boys in Toti). Within an hour there was quite a vocal crowd sitting on the beach in front of the deck. It got a little chaotic, so we moved back inside. There’s a lot of stories from those days but you know the code: what goes down in the bush stays in the bush! The reciprocal bonus of housing the guys for all those years is that when we go onto their turf, we likewise have a place to stay. Like when we went to Hawaii we stayed with Shane.

Those Quik stores were eventually closed when we were bought out by Quiksilver International, but I did manage to keep my JEEP Factory Shop which I’d built up and established, so that also keeps us busy. I still surf every day if the waves are good, otherwise I do my music thing.


‘Running Through The Jungle’ from Led Ginz’s double album, ‘After The Light.’

As for the music, I’ve worked with many bands through the 70s. Mostly hard rock and blues, plus a Hendrix tribute band with Larry Edwards. The most successful band was Zenith. I was lead guitarist. This was a very hard working band. We made good money and enjoyed a good following. We toured SA a few times, but really had the south coast thing wired, as well as Durban right up to Pietermaritzburg. However, by the mid 70s punk had arrived, which meant that it was time for us to move on and soon after we all got married, had kids and naturally kicked back on the music a bit. When we moved to J-Bay, I joined a local blues group as their lead guitarist for a couple of years. After that I joined an eleven-piece multiracial reggae band, which was heaps of fun. 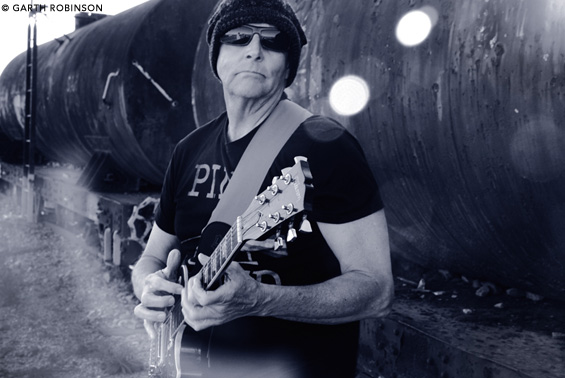 Robin and his Gibson Les Paul Custom. This scene was shot at an old railway line at the back of J-Bay on the other side of the National Highway.

The last few years I started ‘Led Ginz’, which is a kick-ass hard rock and blues band, and began writing vocal songs. Up until then I was a huge Satriani fan, so all my CD’s up until then were guitar driven instrumental. Now I’ve done four vocal CD’s (one double CD) plus a double CD for a musical play, which I did for a church group in the townships. They asked me to do them a play to address violence, drugs, alcohol abuse and Aids, which they could use as an outreach program for the surrounding schools. In total I have 17 CD’s out in the wide world. They sell on sites like cdbaby.com, which is a USA music distribution site. From here my music is available globally on iTunes, Apple, Spotify, Amazon, etc. The bonus is I get paid in US dollars for doing something which is an enjoyable passion.

Today I have my own recording studio at home. Artists from far and wide pitch up. We jam, we record, we surf, we create, we share. 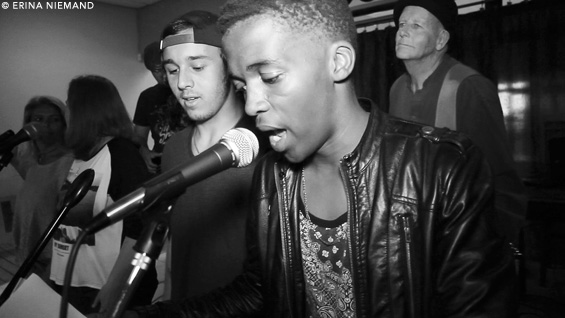 During his long musical journey, Robin has collaborated with an eleven piece reggae group as well as written a double album for a school play addressing violence, drugs, alcohol abuse and Aids. From left to right – Kate Colston; Kye Going; Marcus ‘Boy’ Stokwe. 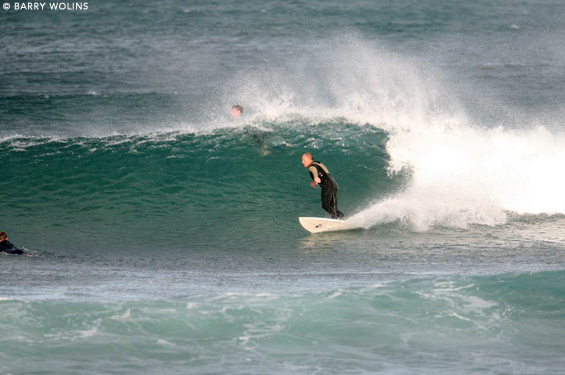 Robin cruising down the line at Albatross.


An epic rock riff with legendary bluesman, Jono Lemley on vocals. All instruments, lyrics and production by Robin Morris. Taken from the CD ‘Circle Of Light’ – Robin Morris.

Go to www.robinmorris.co.za to preview more of Robin’s albums, or click the links below to watch some of his music videos and collaborations:

Missed one of our previously featured artists?
Click the links below to check out their feature:
The Hinds Brothers / Steven Sawyer / Sean Koch / Miles Sievwright