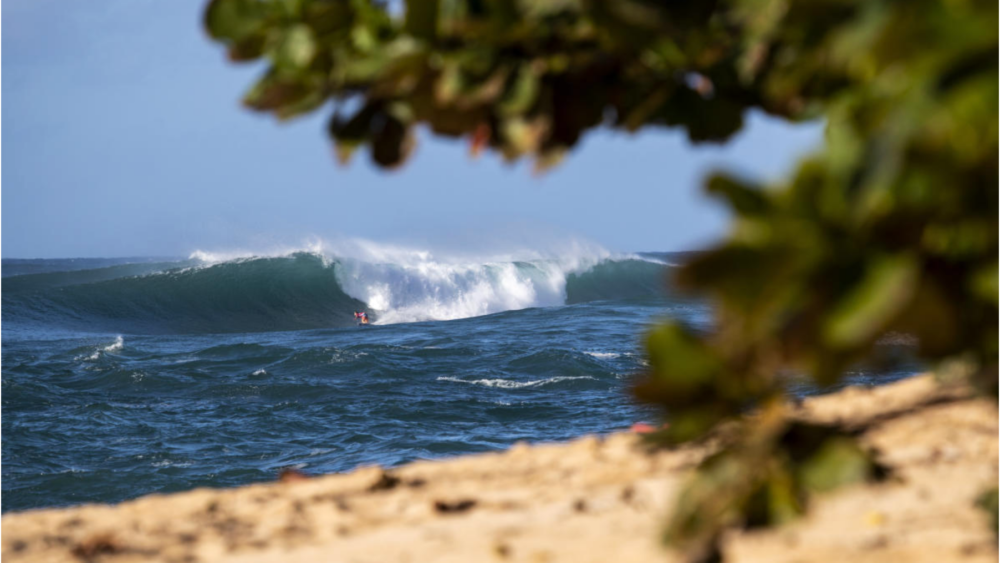 You’re always told that it’s cool to push your limits a little when it comes to big waves, to paddle out and give it a go if you’re feeling a little nervous and that it’s all part of the learning process of being a surfer and of being a human.

Well… It’s not all true.

It’s sometimes very foolish to paddle out when you’re obviously out of your depth, and there are two elements that come into play when it comes to big surf and having a go.

The first is the bravery of youth. Totally cool, the only way to learn is to experience it, so go out and have a go, get your beatings, lick your wounds and reassess. This only works for the young.

The second is that discretion actually is the better part of valour. We waited all day for Sunset Beach to pick up. I didn’t want it to pick up, and I wanted the afternoon to fly into the night so that I could grab a beer and chill on the deck at the house overlooking Phantoms and Velzyland.

Late in the afternoon, there were real sets coming through at Sunset and the entire household headed out, including me on a borrowed 7’6 blade that did not feel comfortable under my arm.

The West Peak. All my life I have heard about and read about the west peak at Sunset and I grew up in fear of this loathsome, lumbering miscreant lump of water that would materialize in the channel, hit a lump of coral, and do a sharp left turn and bore down on hapless surfers, mowing down anyone in its way. I grew to dread the west peak, and whenever I got caught inside by any wide set at any surfing location in the world I would consider it a ‘west peak’ moment.

The first wave of the set looked like the wave I had been waiting for all my life. Ten-foot and solid, with a wall stretching all the way to Waimea. I was in the perfect spot, it even seemed like there was a chip-shot forming as I paddled. This was going to be a cinch. There’s nothing like a ten-foot wall with an easy take off….

I missed it. The wall of water passed underneath me, and the opportunity for the wave of the day, of my year, possibly of my life was gone. I turned around and saw that the next two waves were quite a bit bigger than anything I had faced so far in my life, and they were going to break in front of me.

I scraped over the first one and fixed my eyes on the next wave. It was that very instant, as I put eyes on it and as I understood that I was not going to make it, my brain did that little wobble; the fight or flight moment.

I had a split second to decide. Stand up on my board and dive off to try and get as deep as possible, or quietly take the biggest breath; hold my nose and slip underwater. Either way, I was about to enter a world of unhappiness.

Out of my control however, my instinct took over and saw me forget all that I had learned about the ocean.  I turned around, pointed my board towards the car park and waited for the wave to hit me from behind.

I could have died out there that day. My borrowed board disappeared under me in the most violent thrashing I had ever experienced the instant the lip hit me, and I was sent deep and tumbling with no air in my lungs from the get-go.

I can’t remember what happened, but when I surfaced I was winded, instantly drained and in shock, and it was only days later that I acknowledged that I might have been crying.

When that wave hit I never went through a sliding door to another universe where I rule big wave line-ups the world over, where I’m a vainglorious big wave hero, roaming the planet in search of bigger waves and more applause. In my universe, I look at big waves quite often, but I don’t surf them. Too scared, I’ll leave it to the youth.