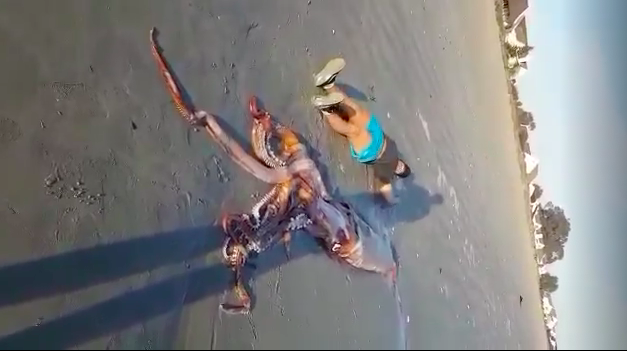 Estimated to be around 200-300 kg, people who found the creature tried to roll it back into the water, but couldn’t do it. In the end, they decided to leave the animal to “die with dignity”.

“It was sad because I could see it was dying,” reports Richard Davies to News 24. “It was still pumping out ink and I touched one of its tentacles which sucked onto my hand and I actually had to use some force to remove it,” said Davies.

Dr Wayne Florence marine biologist and curator of marine invertebrates for the Iziko Museums of South Africa, said, “since this giant squid is just over 4m in total length, based on expert opinion of other larger specimens, this beast was probably less than two years old”.

In 1992 the largest squid was discovered in South Africa and it measured 9.1 meter.