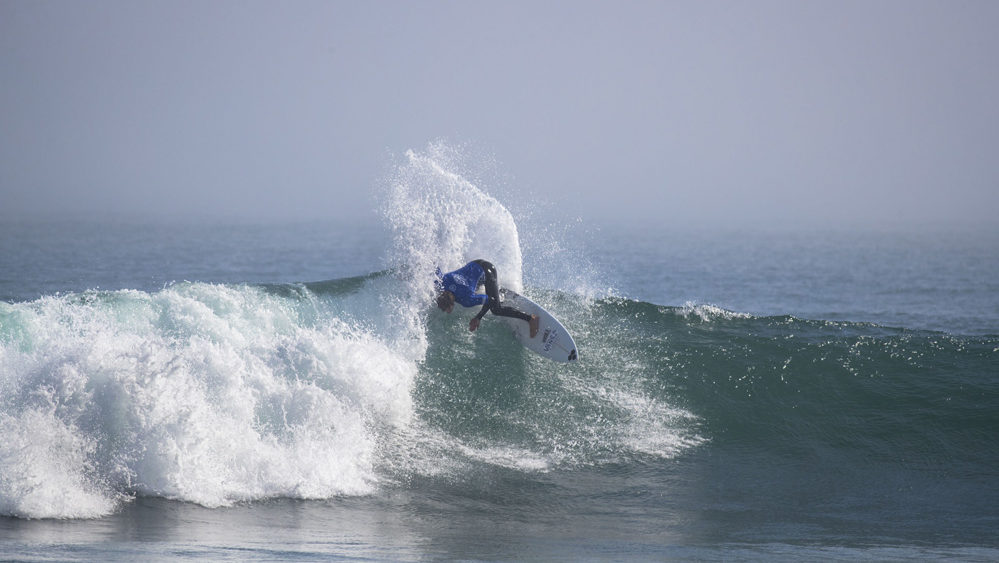 It’s an 8 am call for an 8.15 am start and we arrive at the beach well before the call. 7.15am and we’re pulling into the parking lot with team Billabong. It’s freezing, the west coast weather is brutal, it assaults the senses. It has no concerns for human existence. But if yesterday taught us anything, once the sun rises, the tides change quickly and suddenly you’re scrambling to shed layers, searching for water to keep hydrated and bumming sunblock off fairer skin friends. The sun barely over the horizon as we enter the parking lot and Yo-yos is brisk with activity. Surfers hopping into cold wetsuits, gloves, boots, 4/3s, shivering, it’s icy and the thought of surfing seems irrational but the waves are again absolutely shreddable and there’s no sign of yesterday morning’s mist… or have we spoken too soon? 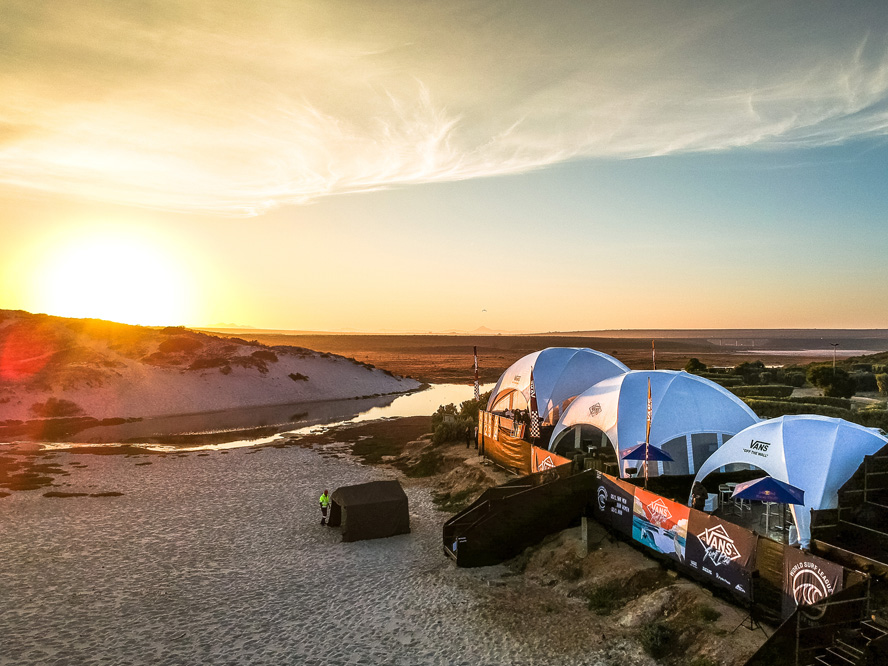 The contest director Dutchie hastily calls the contest on! And off we go. Heat one sees Chris Zaffis from Australia take on Eli Beukes, Ricky Basnett and Adin Masencamp. Eli Beukes starts the proceedings, quickly logging a 5.75 and backing it up with a 4.75. Blast from the blast and former CT competitor Ricky Basnett is in the draw, enjoying his annual competitive showing. Ricky, now a free surfer (excepting the Vans Surf Pro Classic) surfs smooth, drawing clean fluid lines and reading waves with exceptional intelligence. It’s easy to see how he once was one of the top 44 best surfers on planet earth. We’re excited to see Adin Masencamp surf; Adin’s gone full time on the QS, traveling the globe in search of higher-rated events and he’s back on home soil to compete at Lamberts Bay. Adin takes his first wave. He surfs it impeccably well, deep bottom turns to drawn out open face massive carves with powerful rebounds. It’s the best wave of the heat, the judges award Adin a 7.50. Adin has things under control, but as fate would have it, Yo-yos is a tricky wave to position oneself, the sets break super far out and the insiders super close in. Adin can’t find himself a backup and ends up falling out the draw requiring a mere 3.75. 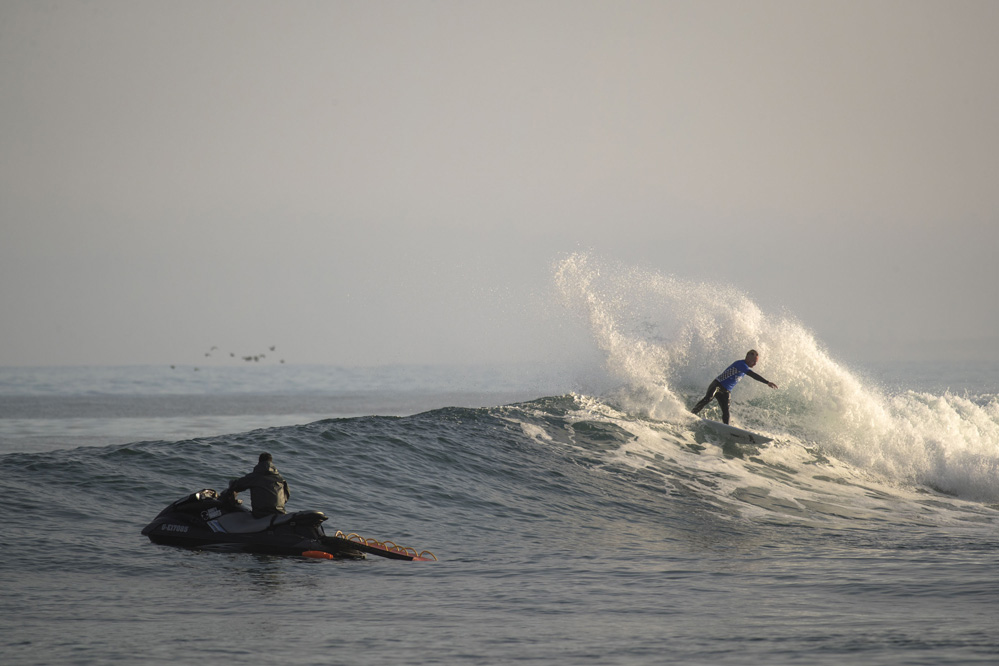 For all intents and purposes, we thought we were home free regarding the mist; the sun already blazing down and its rays warming our skin, but just as one judge mentioned the word ‘mist’, on cue, a dark and low cloud rolled in like a thick fluffy duvet. Judges, spotters and commentators began to strain their eyes to see colours and turns and as heat three drew to a close, so contest director, Dutchie placed us on hold until the duvet lifted. 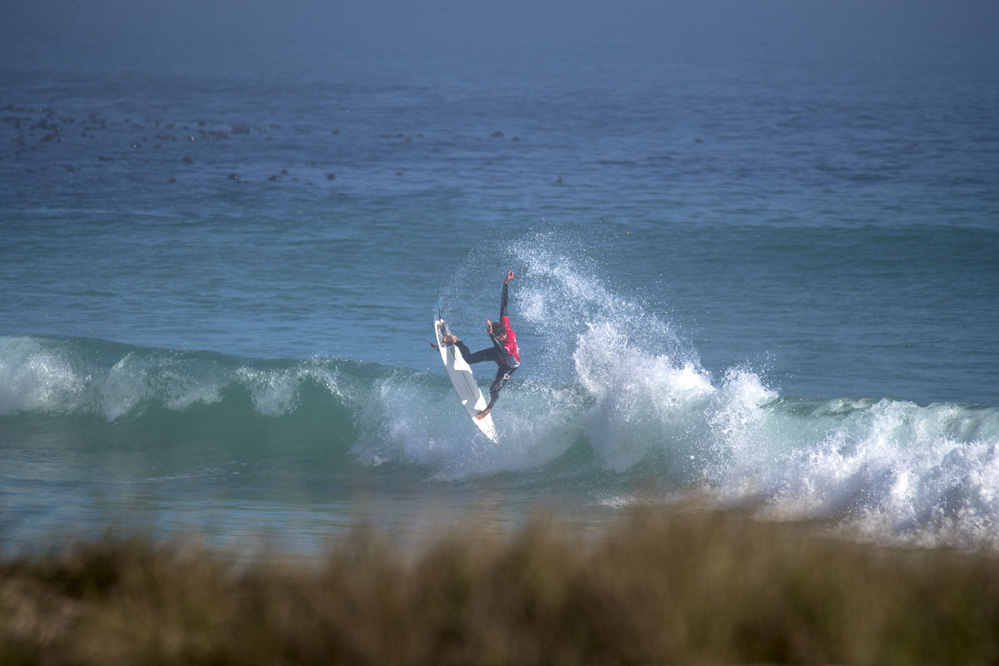 Slade Prestwich, setting the fins free through the haze. AVG

Yo-yos is a different wave, it’s a heavy water west coast, Atlantic Ocean wave, and it requires a different approach. Those who live on the West understand its nuances and know its moods which Diran made evidently clear. Once the mist cleared Diran showed his familiarity with the West by surfing his way to an easy victory. He found running lefts which he belted with much enthusiasm. Heat 6 saw Slum Town local, Bryce Du Preez show his metal. Finding a sizeable left off the buzzer. Bryce faded the takeoff and proceeded to untie his belt and discipline that wave like a principle from the 70s. The judges dropped an 8.00. Bryce quickly backed his 8 with a 6.50 and strolled his way to a heat win. 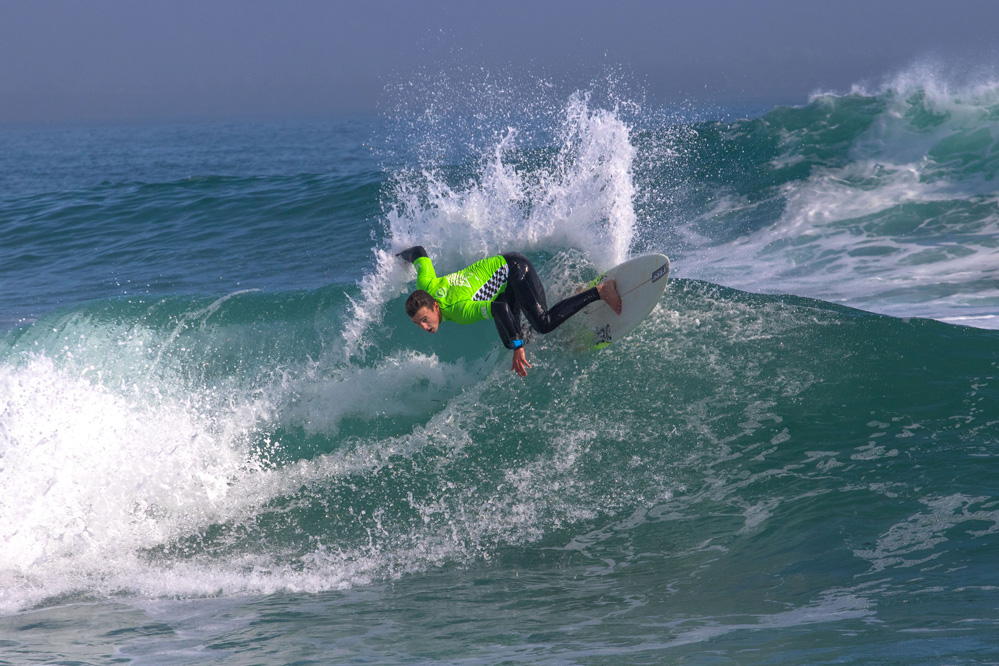 The mist continued to threaten throughout the Men’s division but once we moved to the Women’s side of the draw, the mist cleared and out came the sun. The judges scrambled for water, sunglasses and lighter attire. Cape Town local, Natasha Van Greunen showed her enthusiasm for the heavy water rolling Yo-yos. Her backhand perfectly suited to the occasion. Like a pig in mud, she proceeded with deep bottom turns complimented by cheeky off-the-lip cracks. The judges thoroughly enjoyed her approach, furnishing her with 6.00 and a 6.15 for her efforts. Next to shine was Ariane Ochoa from Spain. Ariane competed in the Port Alfred Classic which she won and thus we were familiar with her backhand attack. Ariane like Natasha looked at ease in tricky, backwashy Yoyos. And like Tash, she went top-to-bottom on the Wes Kus walls. The judges awarded her a 7.75 and 7.45 for her efforts and the highest heat score total of the round. 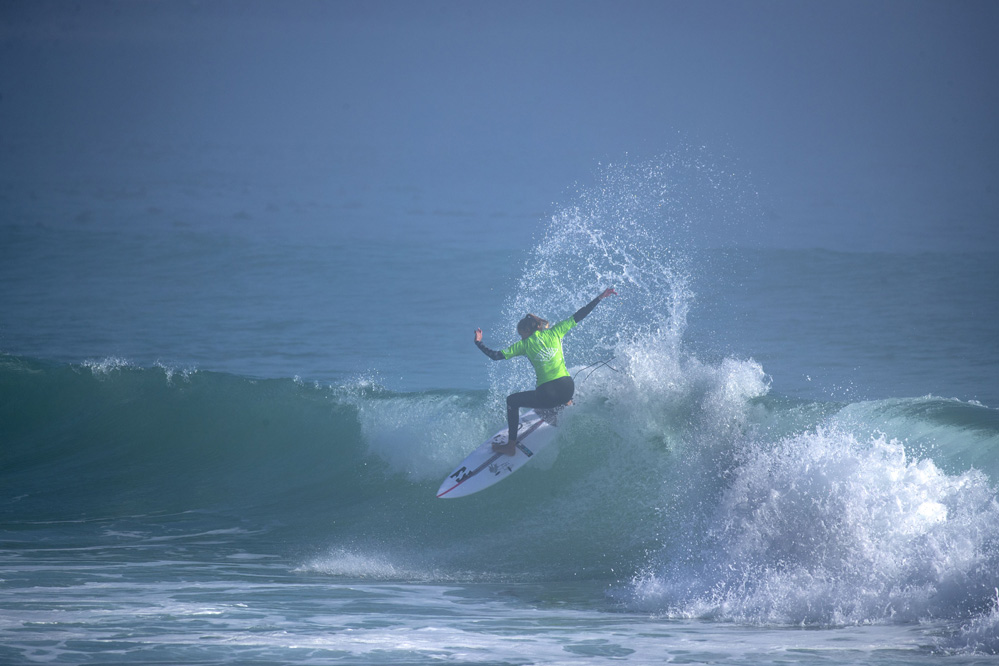 Steaming ahead in the draw and onto Men’s round three, Captain Kai returns to the microphone to announce that he just enjoyed the most amazing massage by the physiotherapists. That sounds great and I follow suit. They ask me what the issue might be and I say something about my lower back. To be honest, my back is fine, but who can resist a free massage? Nobody. While lying face down enjoying the perks of the job, I here Captain Kai scream, “And he maaaakes it!!! A huge tail high full rotation!!” The competitors in my vicinity show the same enthusiasm and the judges drop Koby Oberholzer a 9.00. Just as soon as Koby lands the air, a thick mist rolls in from the Atlantic ocean and contest director, Dutchie calls the event on hold. It’s a thick mist and it comes out of nowhere. The surfers in the lineup disappear and all we can see is the white water from the breaking waves. It’s eerie and it’s cold. The mist too thick to continue and the contest is called off for the day. The waves continue pumping under a thick cloud and the remaining surfers on the beach quickly jump into their suits and head out for more waves. 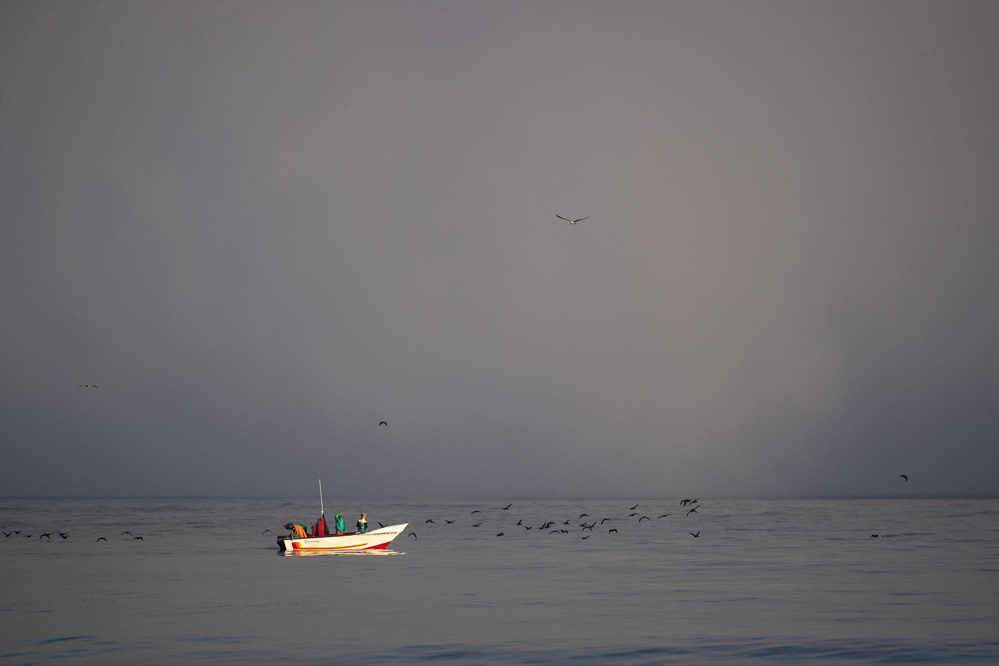 As the clouds roll in. AVG 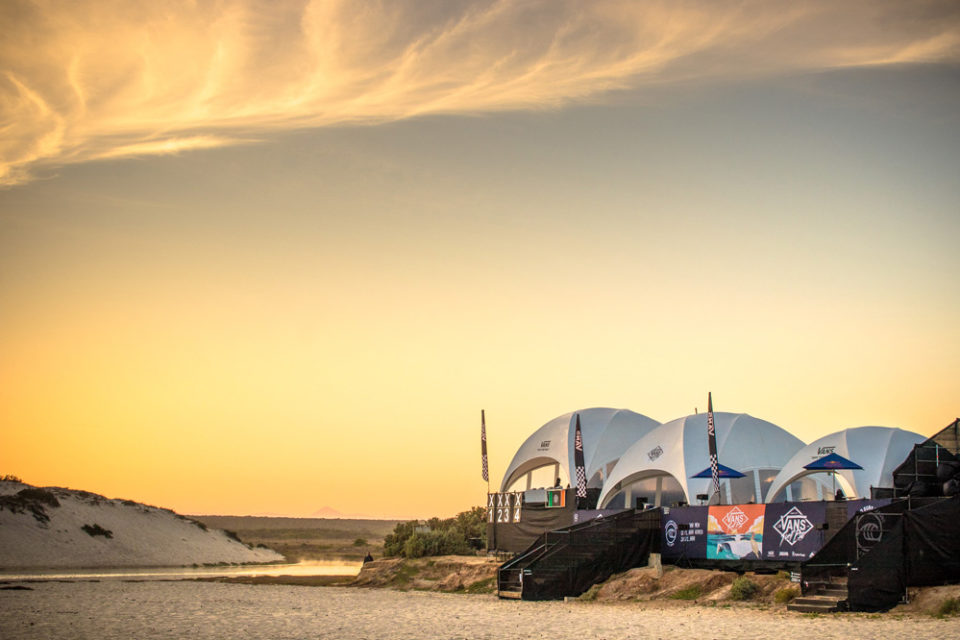 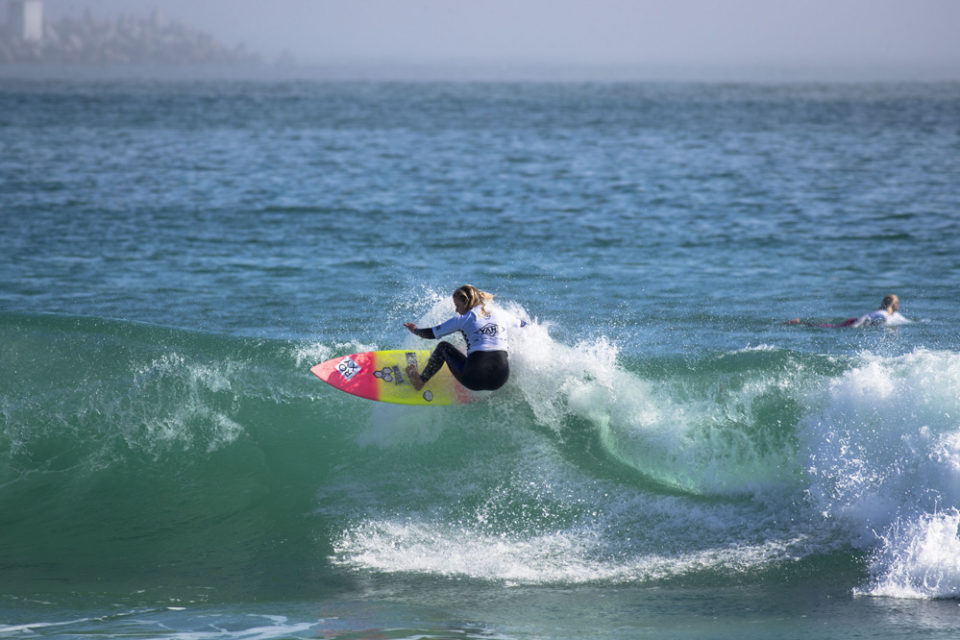 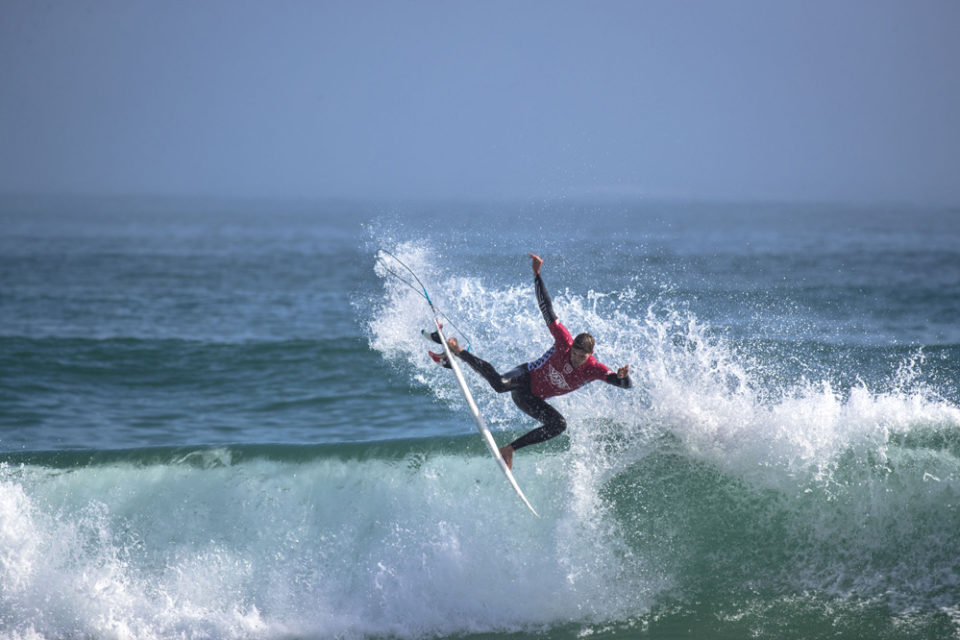 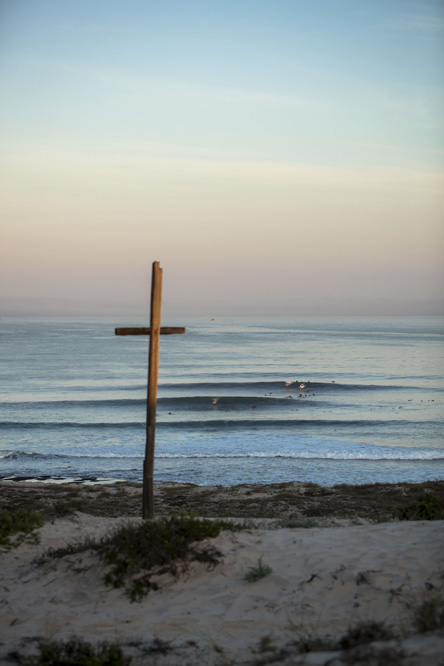 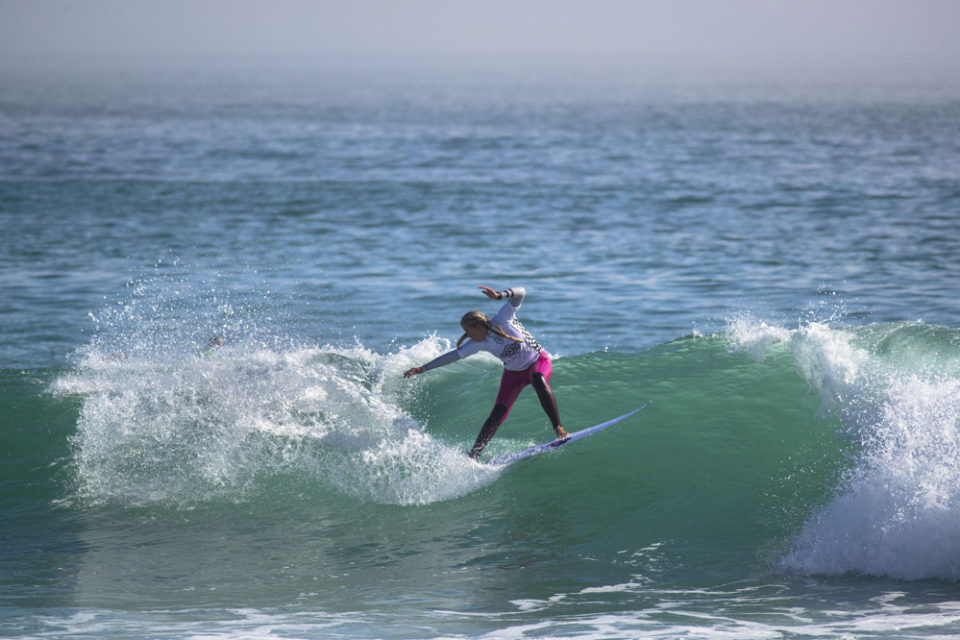 Rachel Presti and a great carve. 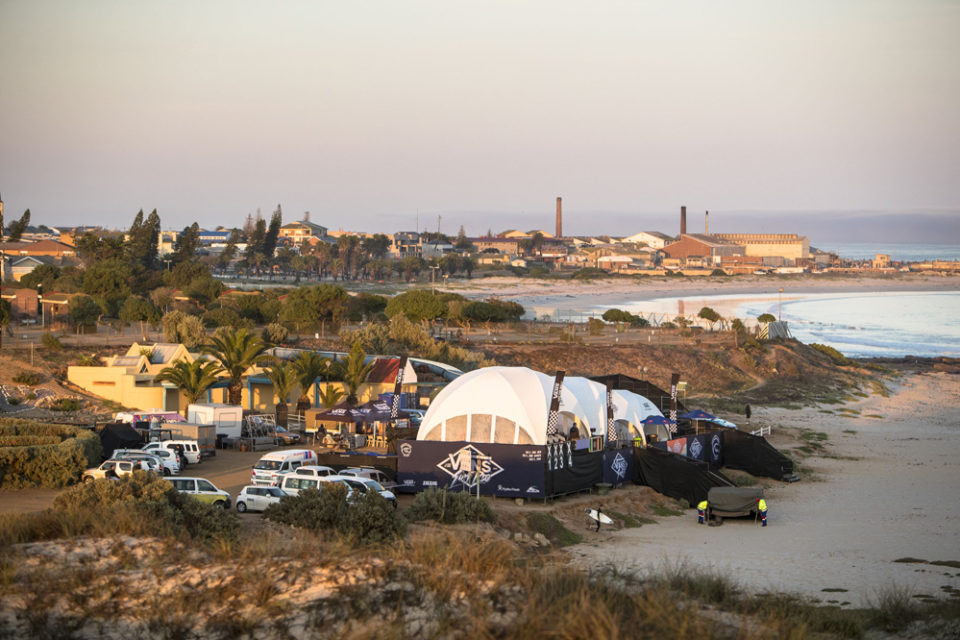 Vans Surf Pro Classic from above 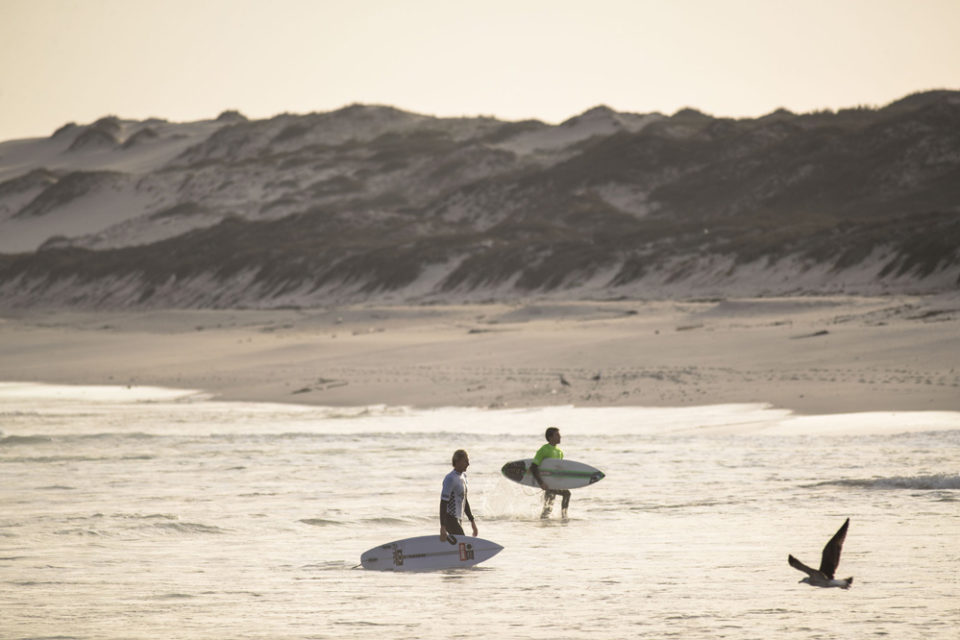 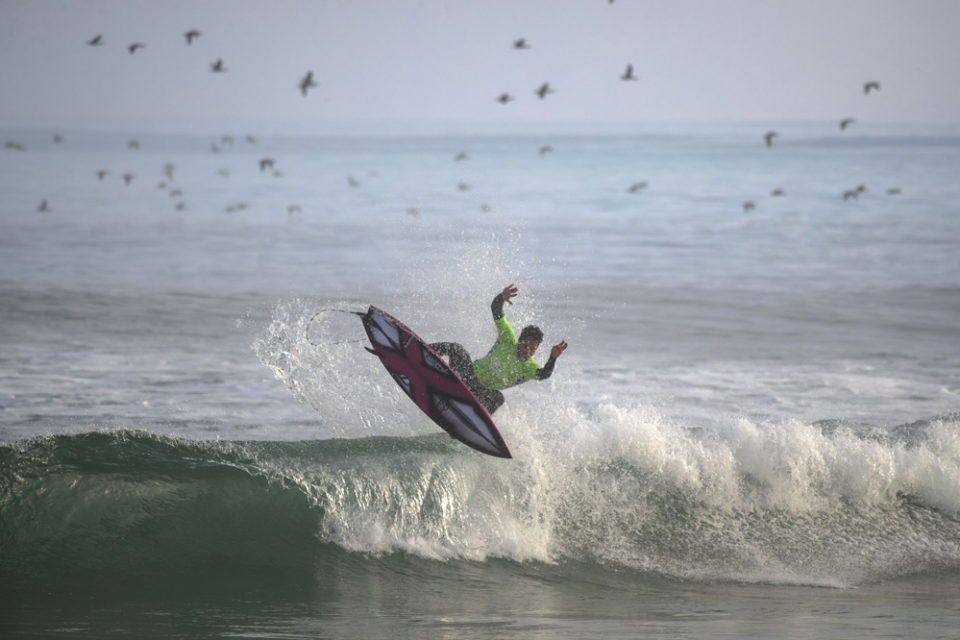 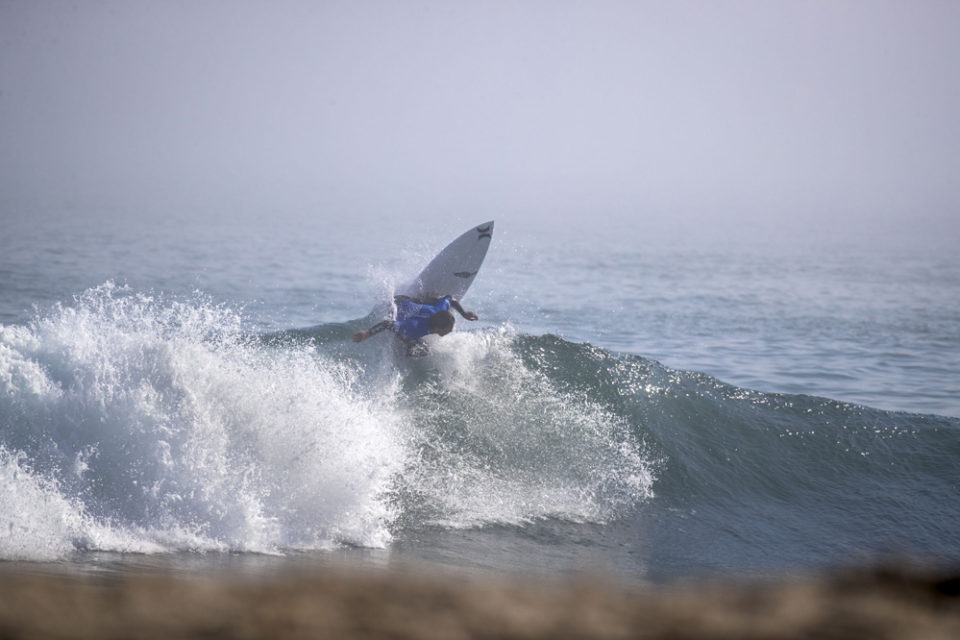 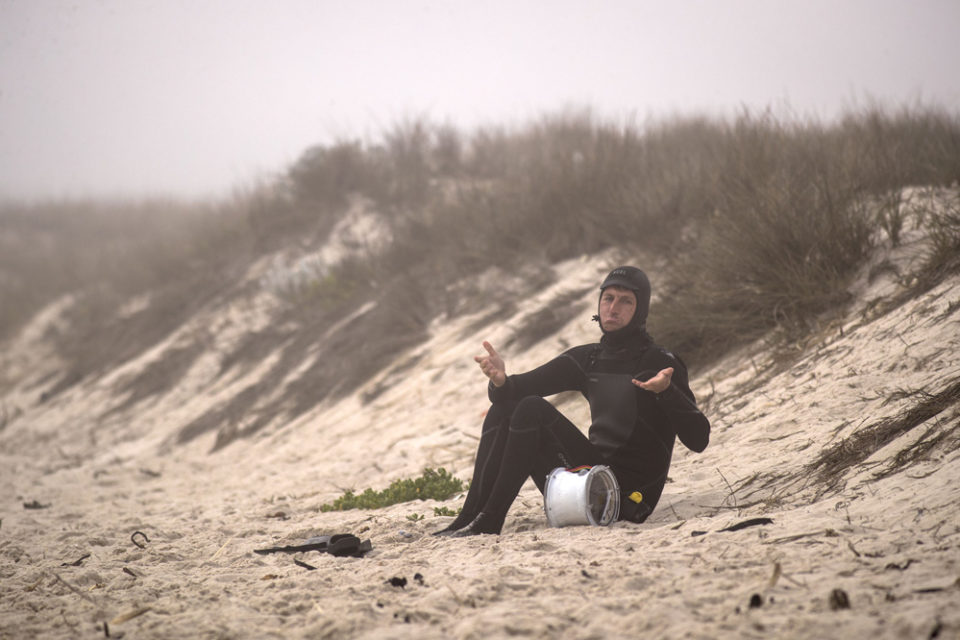 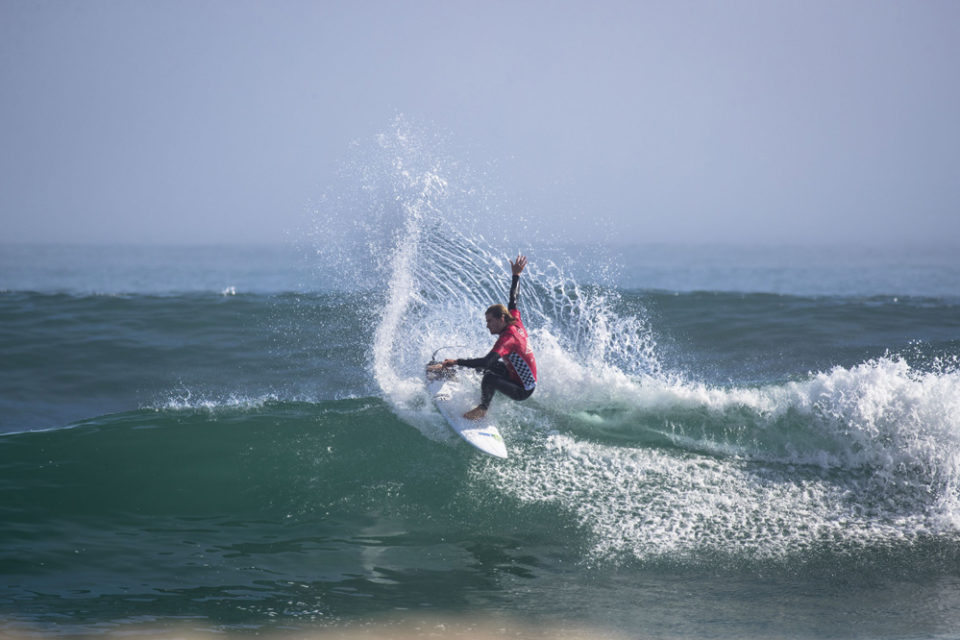 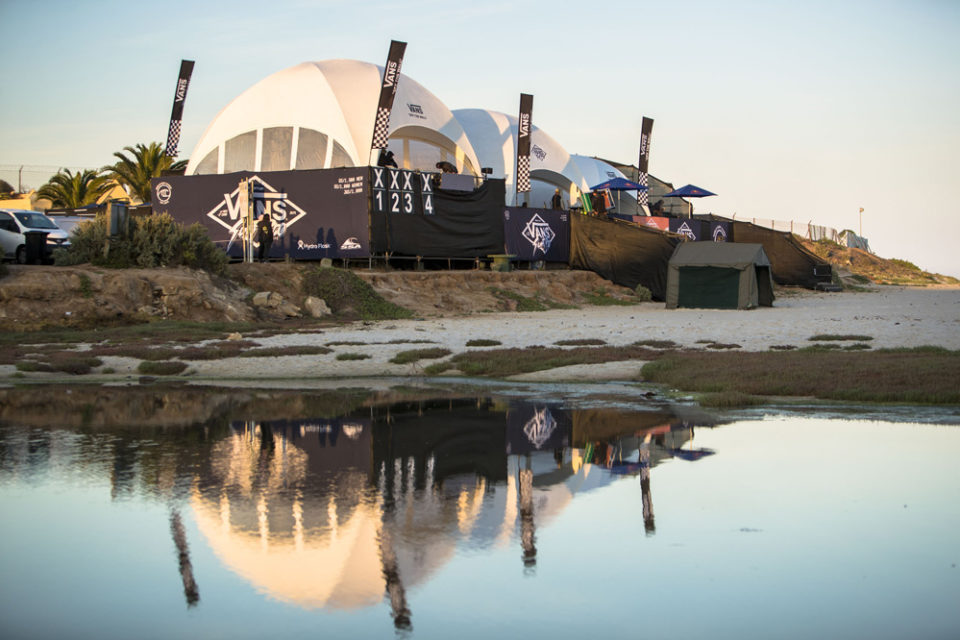 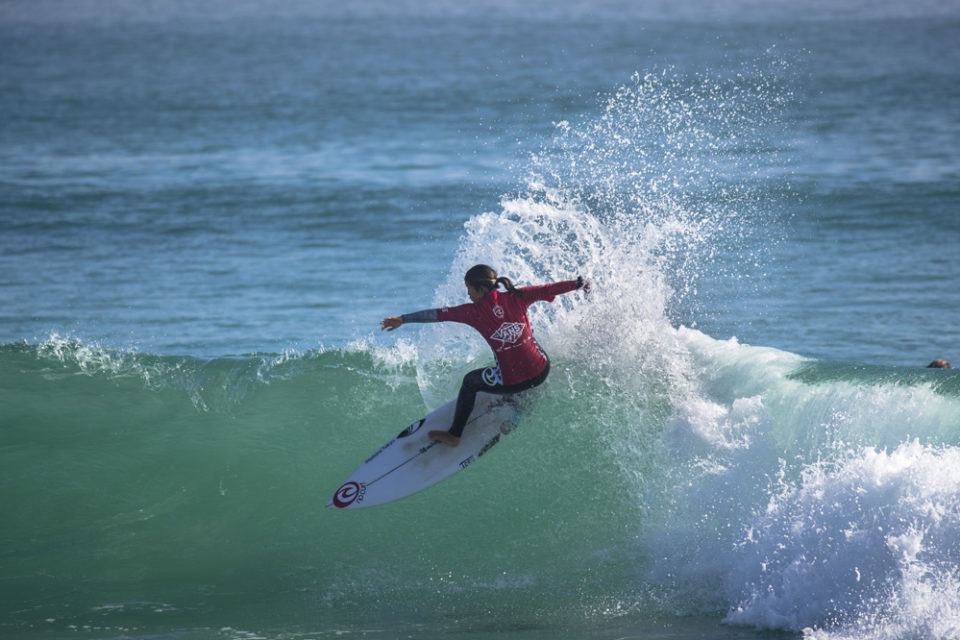 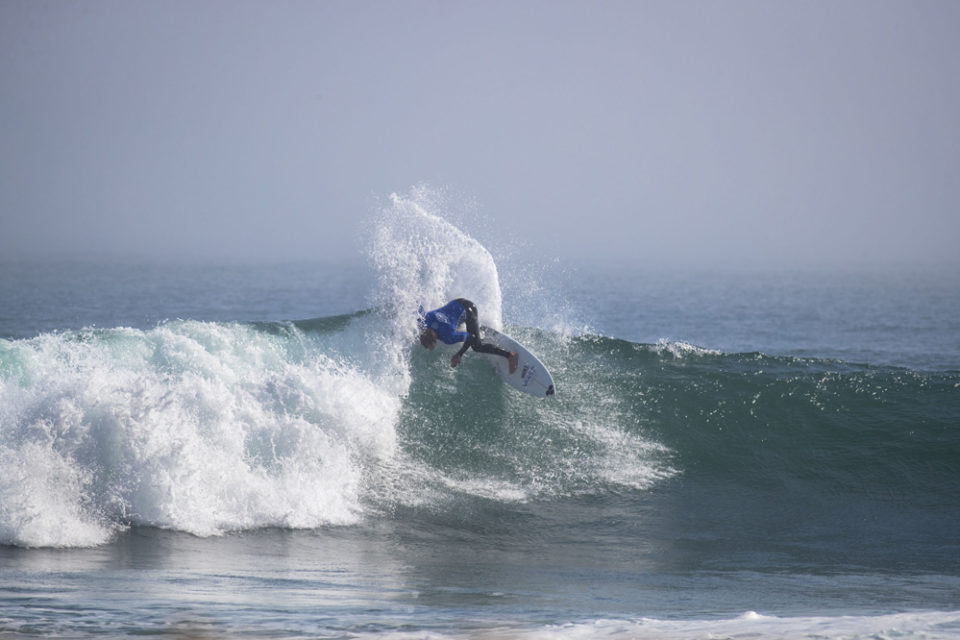 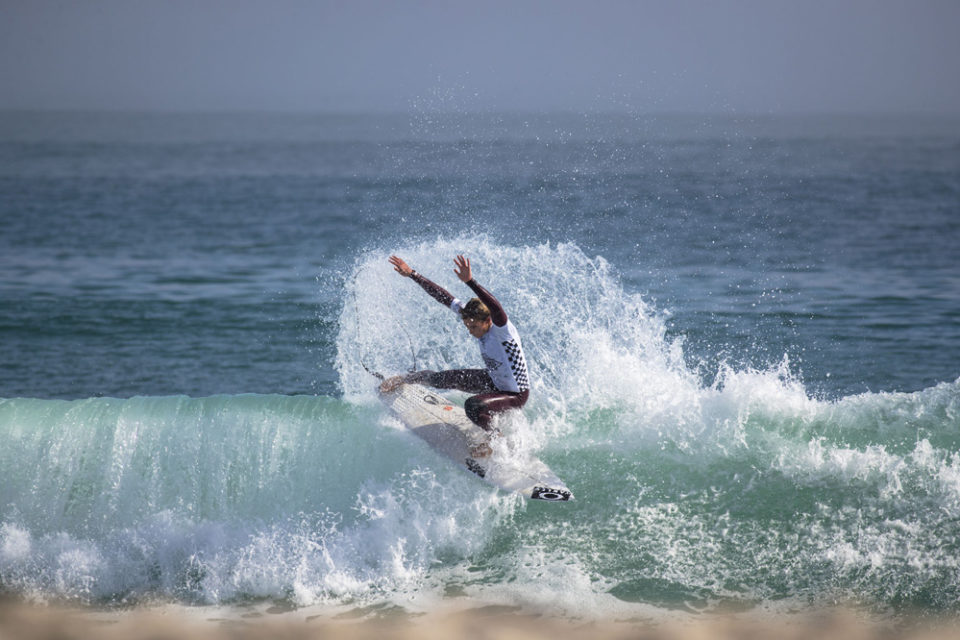 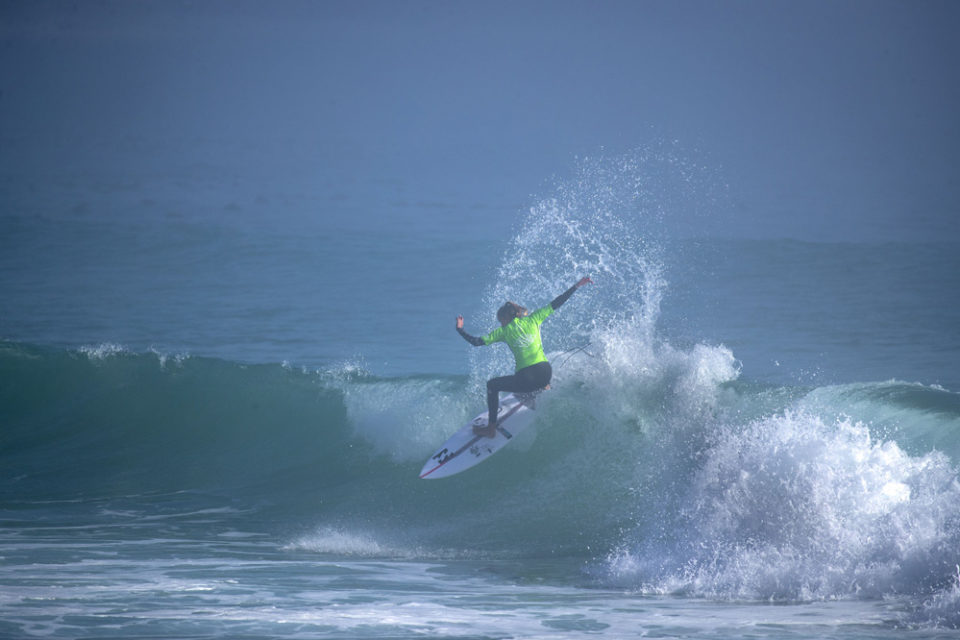 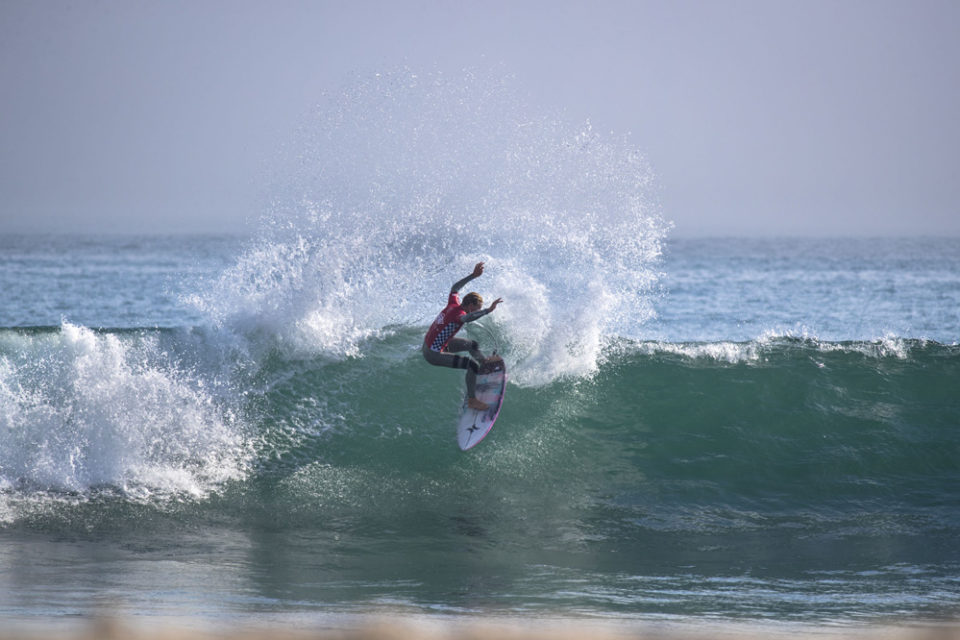 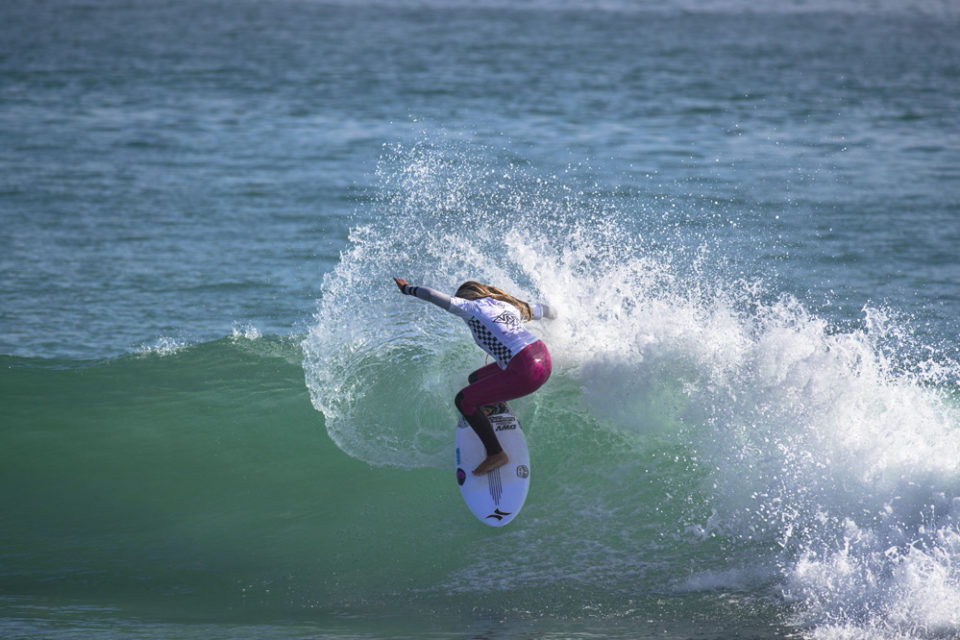 Jordy Maree slams one on the forehand. AVG 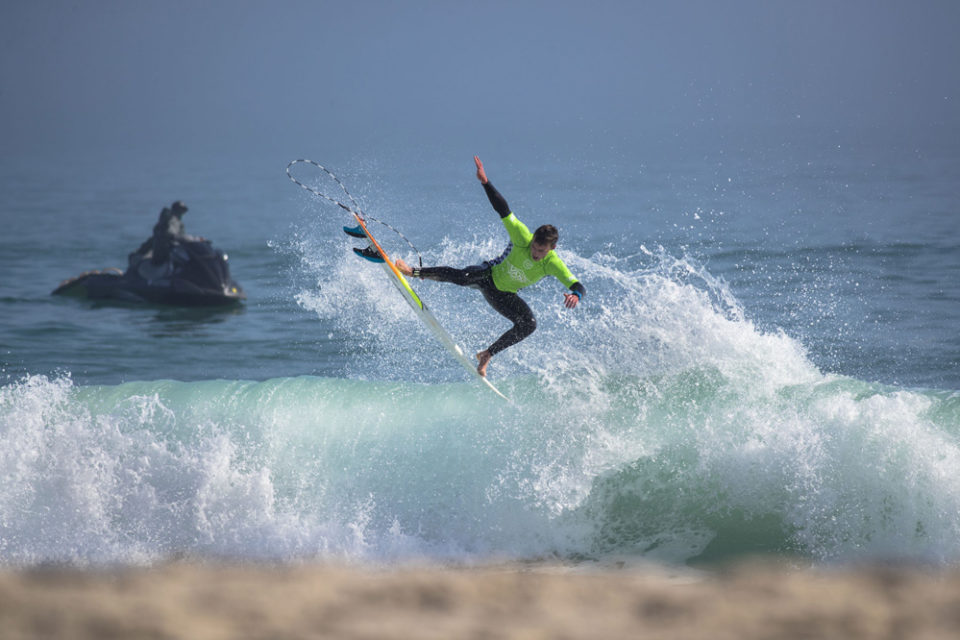 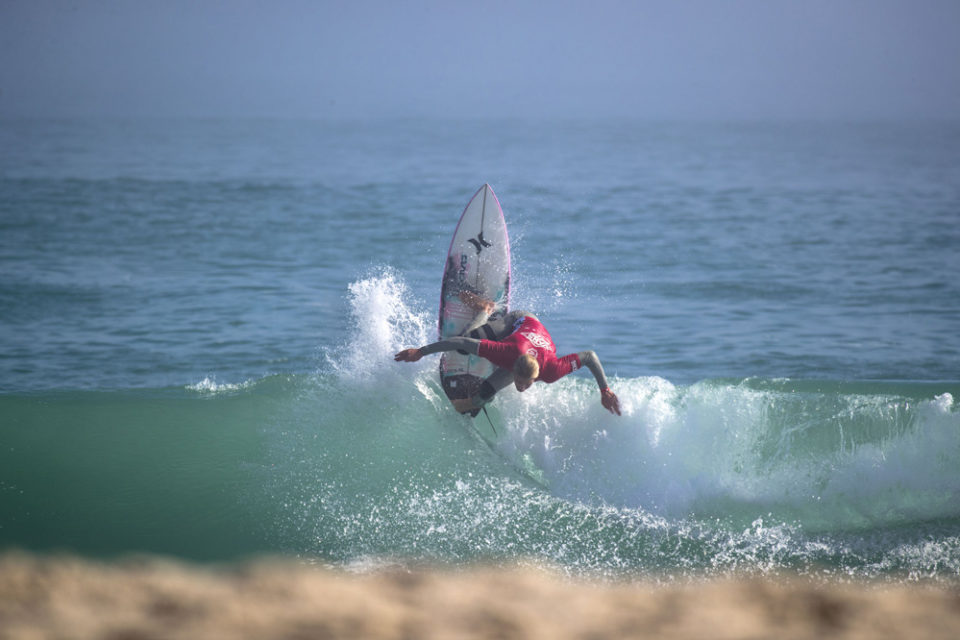 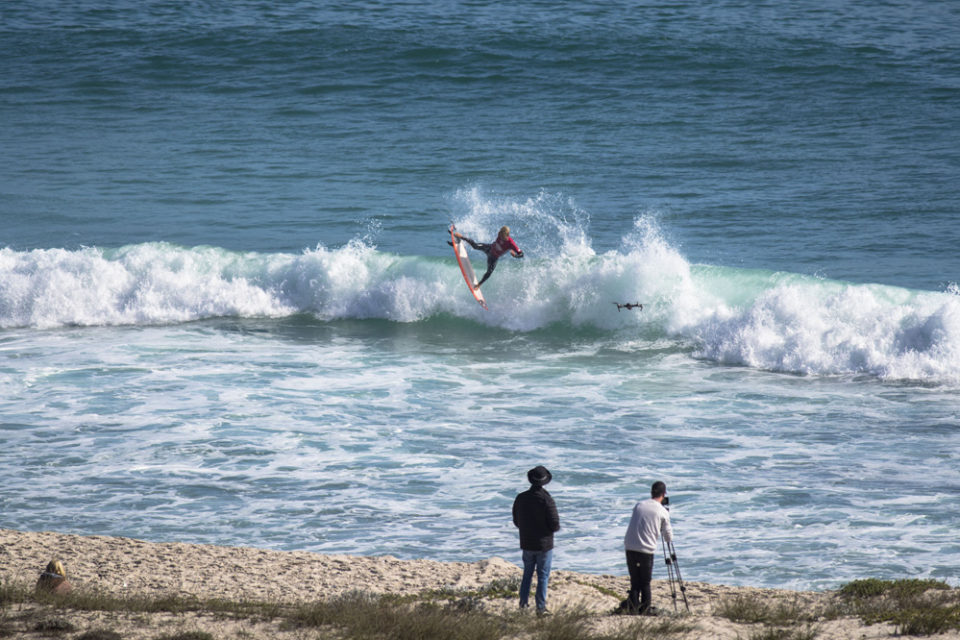