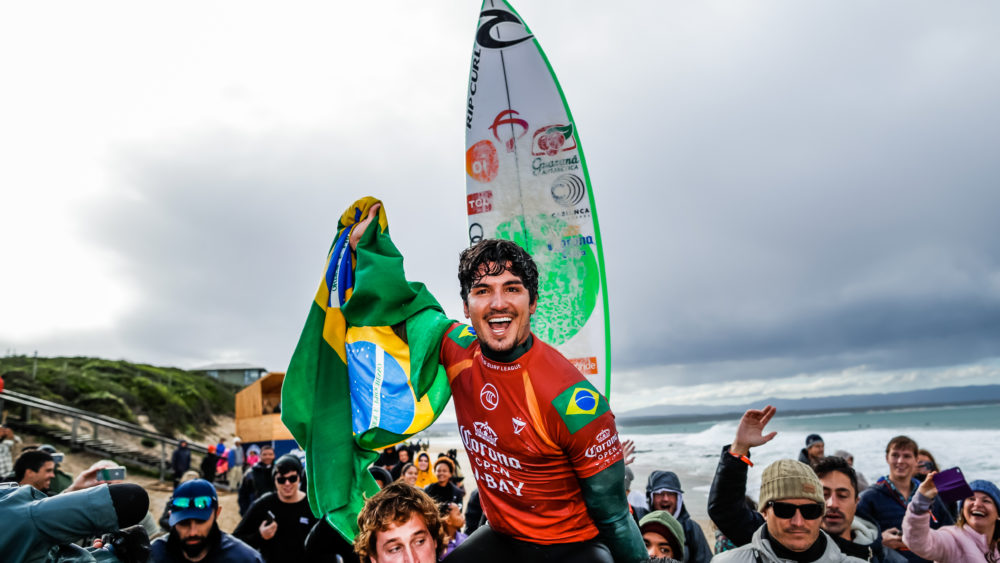 Gabriel Medina and Carissa Moore are the 2019 Corona Open J-Bay champions. Savage intent from Round 1 all the way to the finals, it was pedigree surfing from both of them. Champion stuff. World Champion stuff. You know the numbers, the stats and facts. I won’t bore you with all of that. Let’s rather look at the broader picture and what the live experience teaches us.

This was my first time watching the Corona Open J-Bay live. And it has changed everything. It will be difficult to go back to the screen after this. Back to its dull, flat one-dimensionality. The screen doesn’t blow gale force offshores back into your face, spill coffee or Corona over your jeans and it certainly doesn’t give you free surfs on the lay days, inches away from Gabriel Medina, Michel Bourez and Filipe Toledo. The screen may show you things but it also hides the important stuff. The game-changing performances you get to see with your own eyes, the ones you’ll never forget.

Here are some things I learned standing on the sand and stands at the 2019 Corona Open J-Bay. 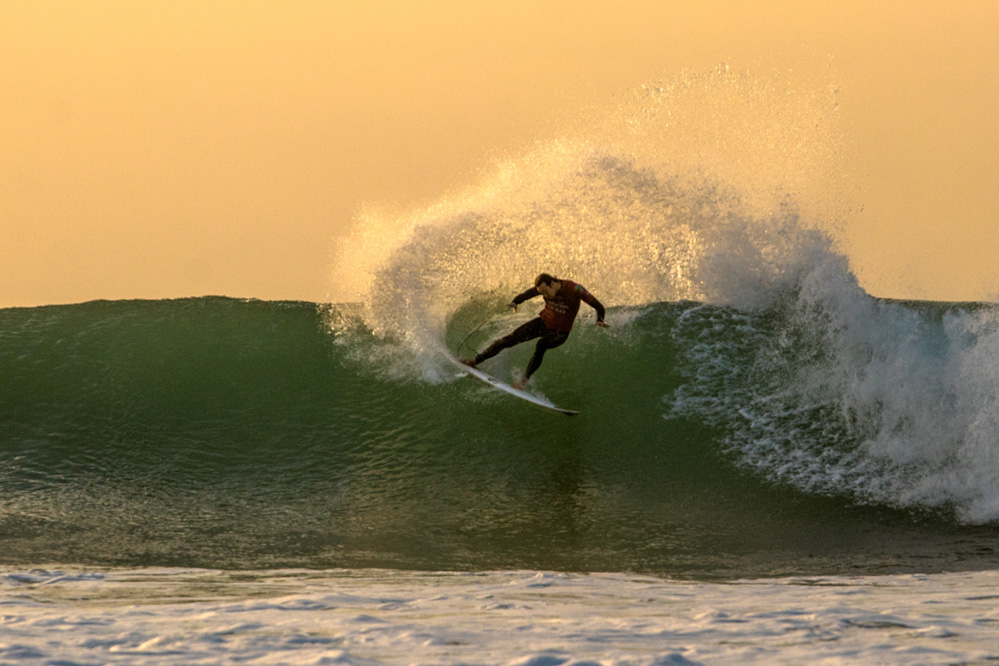 Like a bad night out we just want to forget about.

On Tuesday, July 9, I saw Jordy on a warm-up wave. He may have just been warming up but that wave got toasted. There was a swagger to the rail work and the stance. Being 6’3″ helps I guess.

In the opening heat, he rolled his opponents with relative ease. Did the same to Aussie rookie Soli Bailey in the next round. Smith flared in the sunrise, he looked sharp and angry.

Then in the quarter-final against Owen Wright, Smith’s fire was extinguished. Snuffed out by a priority blunder and pinpoint accuracy and variety of attack from Owen Wright.

A solid set approached, Smith holding priority and the inside, Owen sitting 30 meters to the left of him. The wave reared up and Jordy didn’t pounce. Owen did and nailed the highest score of the heat and the win. On the grandstand. Silence.

“Absolutely mind-boggling. It’ll haunt him to his dying day.”

Resurrection awaits at ‘The End Of The Road’ and seeing Jordy’s revised approach in hollow lefts this year, expect a return to form. 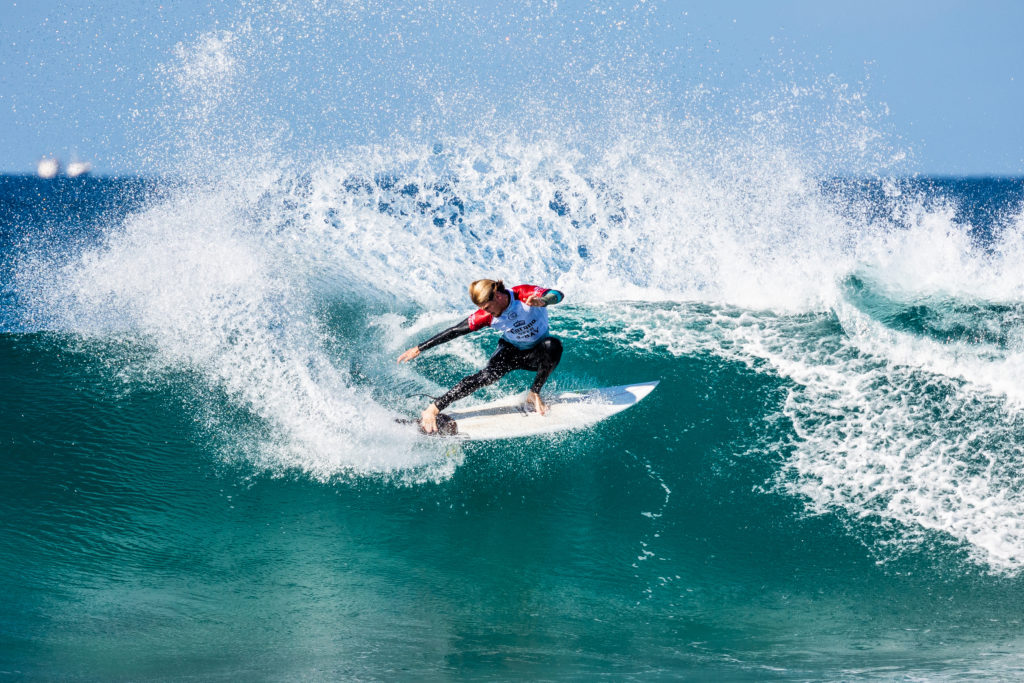 JEFFREYS BAY, SOUTH AFRICA – JULY 10: Wildcard Beyrick De Vries of South Africa is eliminated from the 2019 Corona Open J-Bay with an equal 33rd finish after placing third in Heat 1 of Round 2 at Supertubes on July 10, 2019 in Jeffreys Bay, South Africa. (Photo by Pierre Tostee/WSL via Getty Images)

Michael February’s Corona Open J-Bay story was slammed shut by Toledo, but not without a fine read into a long tube as well as some high line floats and drop wallets, punctuated with his flowing style. He got close to Toledo at one point, but the problem is Toledo can turn a 3.5 wave into a 7.5 at any time.

Beyrick De Vries dropped anchor and sank. Not by a great depth, I might add, he lost by less than a point but waited over 20 minutes for that 1 point at the longest point break in the world. De Vries surfed with conviction and dropped some big hacks. But stay busy.

Gabriel did and turned it around against Callinan. In 3 minutes he went from needing a near-perfect score to win. 3 minutes not 20. 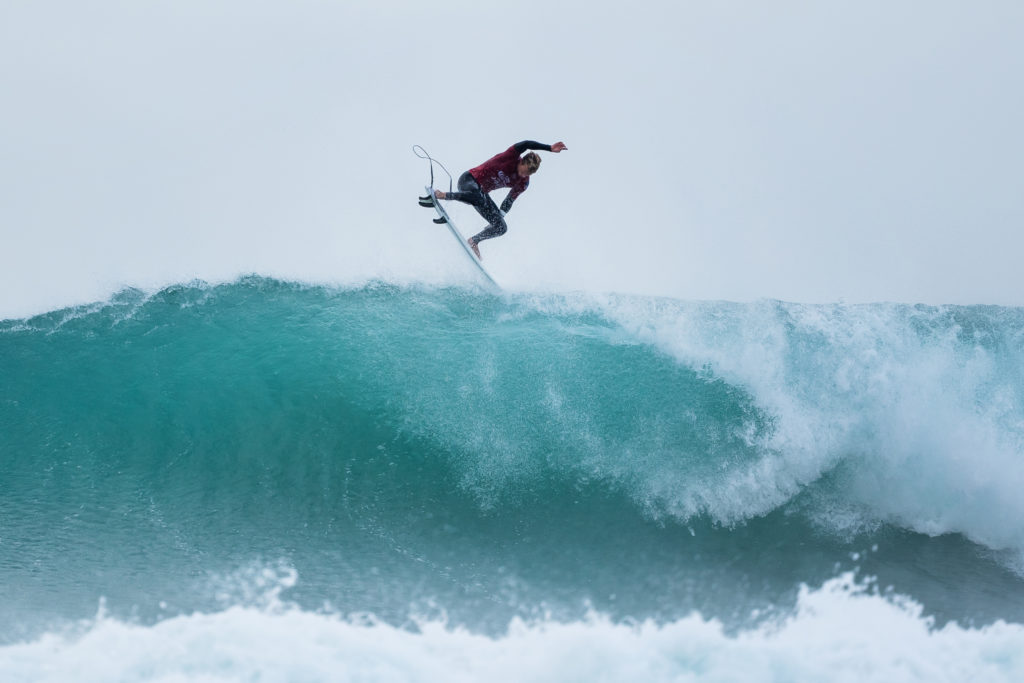 Saturday 13 July, around 10 am coffee in hand, watching Andino lock horns with Adriano de Souza. After a long walled up one, Andino docks into the channel for a beach run.

Dad Dino, standing 6 feet away barks, “Get a real wave!”

6 days later In the quarter-finals against Adrian Buchan, he did just that. Banked two of them actually. Of those two waves, the fade carve into a throaty barrel was pure J-Bay mastery. Difficult to do at the best of times, much, much harder in the howling offshore, buckling your rails and throwing your weight distribution all over the shop.

Backhanders are in the business of closing.

Backhanders finish stronger and more acutely than their chest to the wave counterparts when it comes to murdering the closeout section. When the screw foots hit it they are inverted, a ball of power and energy huddled over their decks with perfect weight distribution. Of them, Medina and Italo are leagues ahead. Seeing Medina in the flesh, he’s got upper leg strength that would make an Olympic weight lifter question his career choice. Italo has the backhand tail blast that removes all 3 fins from the water.

Other backhanders who really impressed included Owen Wright, Ryan Callinan, and Deivid Silva. The latter in his rookie year quickly proving he belongs in the big leagues. 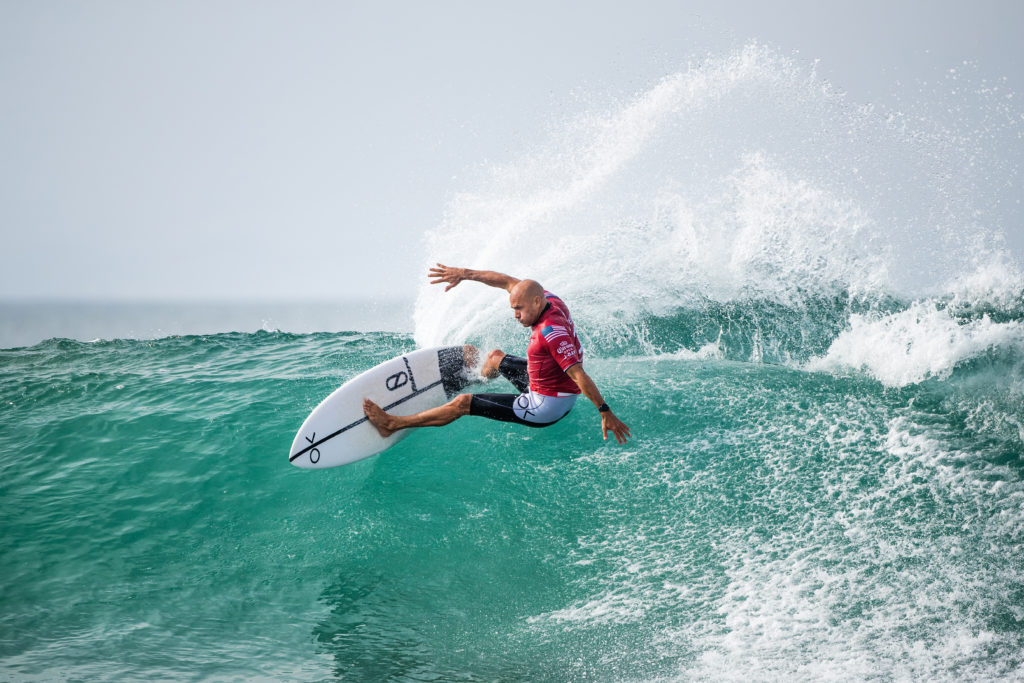 JEFFREYS BAY, SOUTH AFRICA – JULY 17: 11-time WSL Champion Kelly Slater of the United States is eliminated from the 2019 Corona Open J-Bay with an equal 9th finish after placing second in Heat 8 of Round 4 at Supertubes on July 17, 2019 in Jeffreys Bay, South Africa. (Photo by Ed Sloane/WSL via Getty Images)

Slater, is he vanishing with every event?

Wrong board, a wetsuit that made him cold and turns that looked shaky. That was my interpretation of Kelly’s loss to Italo Ferreira in the round of 16. I’ll never question the achievements but the timing to exit stage surely needs to be? 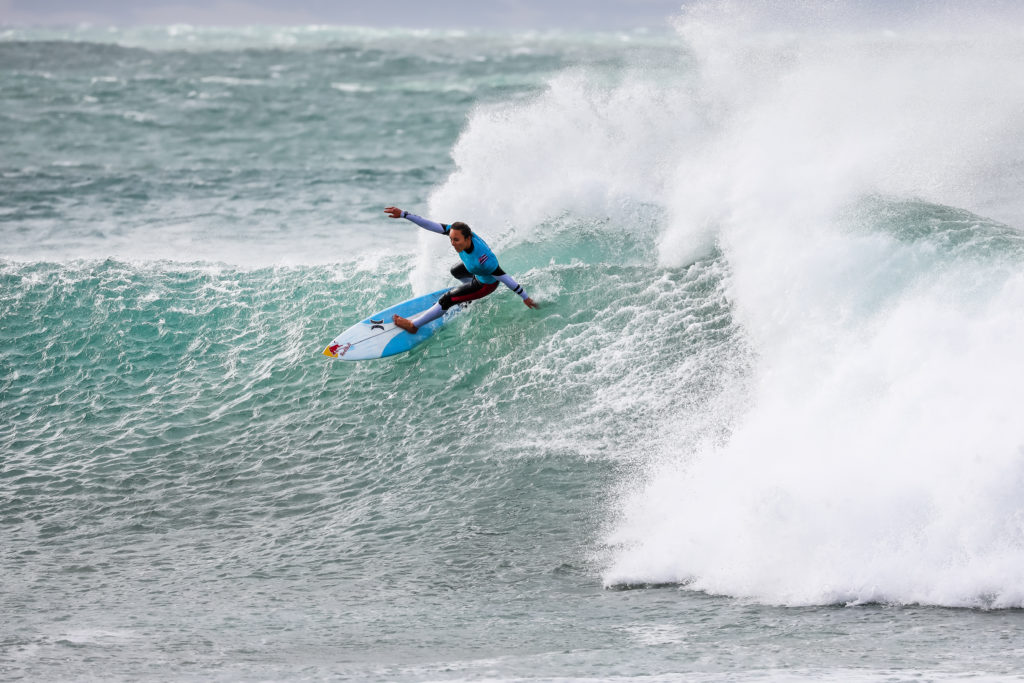 The female form. Placement with purpose.

Caroline Marks and Carissa Moore. If it sounds like a duet that’ll go top of the pops on Youtube, wait till you see them live. I’ve never seen such a performance by female surfers, it was extraordinary. Grace, flow, risk. That’s Carissa. Powerful, direct, no nerves. That’s Caroline.

For me, the quarter-final effort by Carissa Moore, as well as the semi-final between herself and Caroline Marks were stand out heats. Watching Stephanie Gilmore you realise there’s daylight between her and the pack when it comes to style and glide. And I include the men in this conversation.

Stephanie Gilmore needs to buy a plot in J-Bay so she can see out her days surfing down the point toward a dipping sun. If Derek Hynd and Supers are the gold standards of the high line glide, Steph is that with some Brasso rubbed on.

Lakey Peterson. The strength and rail work was outstanding. Real hammer blows off the back foot. She was only shown up by Moore in pure power. 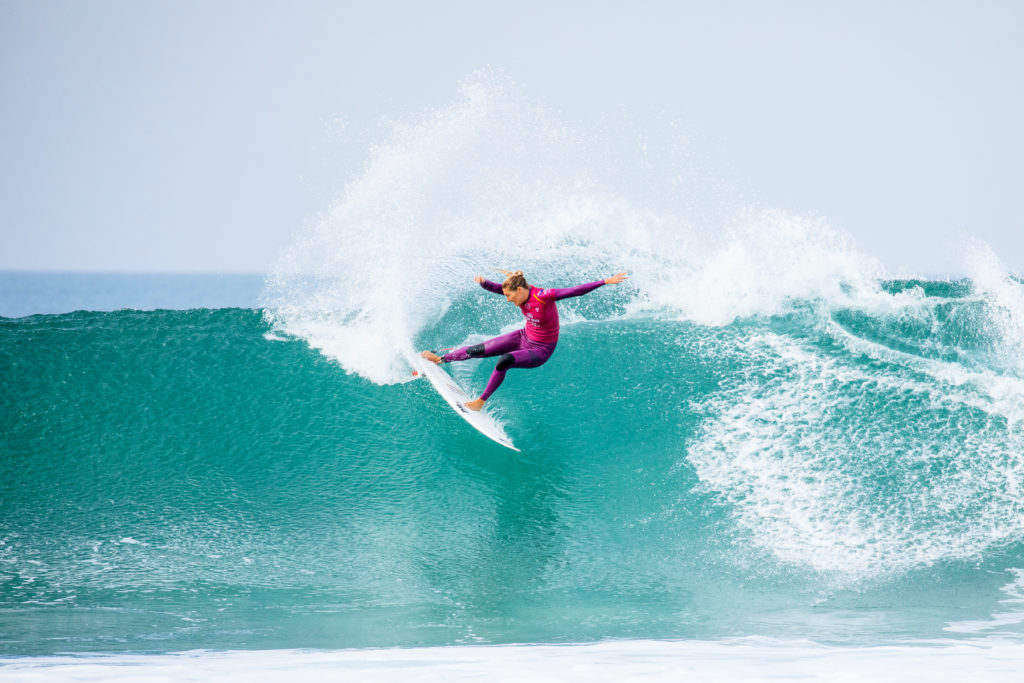 Unfortunately, from a South African perspective, Bianca Buitendag didn’t have the greatest event but it’s great to see her back in action and hopefully back on tour full time again.

I’ll leave you with this before an unfortunate return to the screen for the next Chairman’s report.

Screens flatten a performance. Everyone appears to be going the same speed and, viewed without the depth of field to give texture and layering to what is going on in the water, you miss out on the broader picture. Like positioning in the line up (Jordy Smith ) speed (Toledo), power (Cardoso, Medina, Wright) and flow (Toledo, Italo, Smith)

Live also gives you warts and all truth. The stuff you need to see with your own eyes to realise just how seemingly impossible the performances are when viewed in the flesh.

The biggest difference for me was the gap between the top 5, the new emerging top 5 (Deivid Silva, Seth Moniz, Peterson Crisanto, Griffin Colapinto, Michael Rodrigues) and the also-rans.

Will Jordy Smith fight himself back into yellow jersey contention with some thick barrels at the Tahiti Pro Teahupo’o? Will anybody be able to reign in the Brazilians? What are the chances of me swimming over with my couch strapped to my leash to watch it live? I figure if I leave at 4 am tomorrow, I’ve got a chance…

I look forward to your company as always.