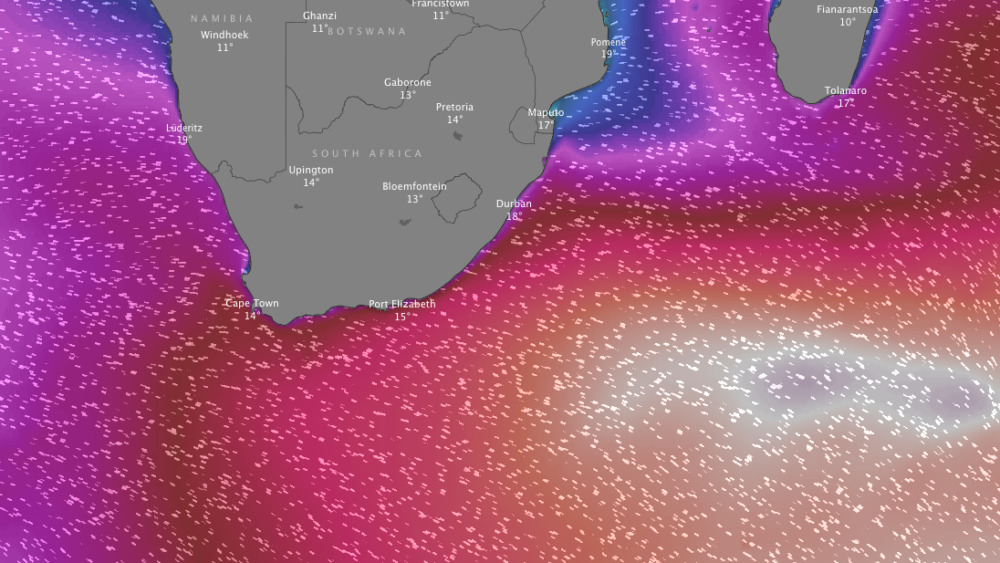 When forecast aficionado Spike throws words like ‘record-breaking’ around the eye of the storm that’s driving the purple board eater heading our way, it’s enough to make any code red swell green with envy. Batten down the hatches, grab the step-ups and watch this space as we keep track of the beast barreling toward us. If you have no idea what we talking about, have a look here. Probably too close and stormy for South Africa, otherwise this storm is going to KLAP the Indian ocean islands, Indonesia, Sri Lanka, India, etc.

I can’t comment on the actual storm that created the pulse, that happened a couple of days ago, but what I can tell you is that it’s still very much alive with a huge area of low pressure visible below the country. It’s massive at 952 millibars and is set to deepen as it tracks through the Indian ocean at 930 millibars, it’s giant and almost unheard of, borderline record-breaking. As for the storm winds, at the center, they are absolutely gangbuster at 60 -70 knots, that’s double galeforce creating swell at the 15 x 18-second range at the moment. That gives you an indication of how strong it would have been a little earlier on when it first developed to send out such a large pulse. What’s also happened here is a massive transfer of energy from the storm moving at the same speed as the swell. So now, you’ve ended with a 21-second swell arriving Saturday morning at its peak pulse and it’s up around the 4m mark, so yeah it’s gonna be wild. What’s also worth mentioning is the fact that a wind-generated pulse/period can only get to 23 seconds, beyond that it becomes something else entirely. So, in conclusion, it looks like there’s definitely a bump on the horizon.