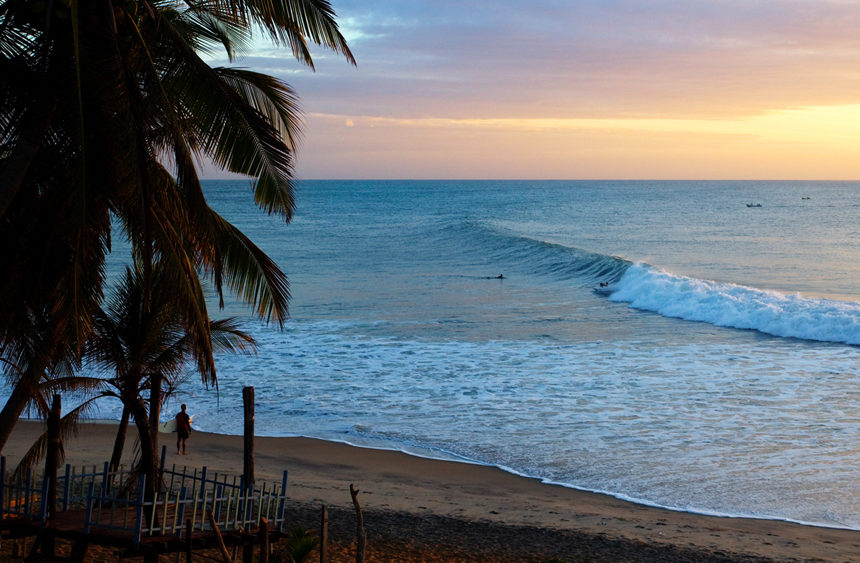 Back when there were huts instead of hotels, people wrote letters instead of Whatsapp’s, Buddhism wasn’t a buzz-word, and surfing a world class wave (naked) was a solitary act… St. Francis local, Marc Maingard, lived the 1970s Sri Lanka surf dream. Here he tells us how he remembers today’s global surf mecca as his entry into the Write To Surf Contest presented by Billabong. (If you read our Sri Lanka feature story titled ‘Swipe Right’ in the last Zag issue 41.4 – you’ll see how quickly things have changed…)

In 1974, at age 23, I found myself in an ashram in South India. It’s a long story but prior to arriving, I looked at the map and thought – there have to be waves there. So before I left Durban for India I had Spider make me a sweet 6’6” pintail. This is where the story really begins…

When I first surfed in Pondicherry, India, the whole village – up to 1000 people – would come and watch in total silence. It was the seventies and fibreglass and surfboards were still completely alien to rural South India. You can imagine, their boats were squares of wood and bark, cut from trees and stitched together with bitumen and glue. So a light surfboard was something from outer space. And a guy riding this thing, was beyond most of their comprehension. 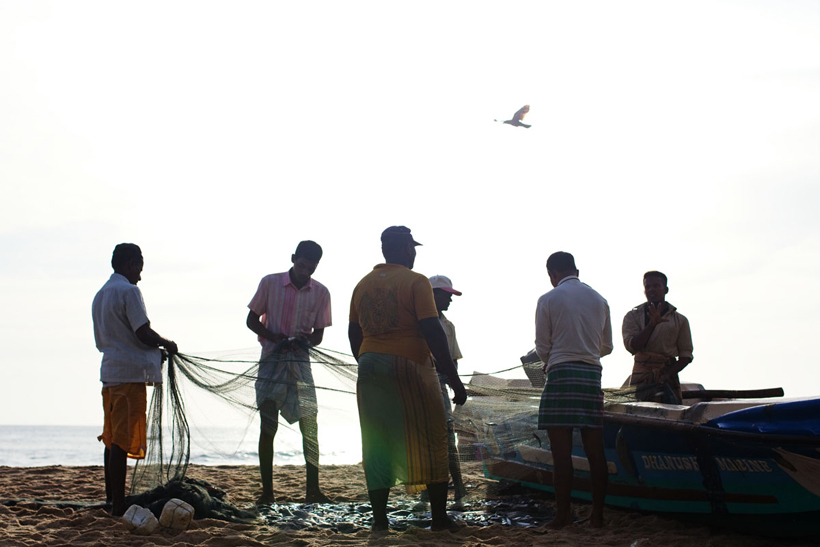 The ashram I was staying at was called Ananda ashram and was run by Swami Gitananda. After completing a six month intense yoga teacher’s course, Swami G asked me and three others to accompany him to Sri Lanka. Back in those days we relied on passing travellers to tell their stories and that’s how I heard the rumour that there were waves at Hikkaduwa.

We arrive in Sri Lanka. Me with my trusty pintail under arm and a need to know if the rumours are true. After helping my teacher set up a small ashram I was free to go exploring. So I got on the train at Colombo – destination Hikkaduwa. Back in those days there were no surf camps and “tourism” was not a catch phrase. You simply went to a place and found accommodation and food. No planning, no worries.

So I get off the train in Hikkaduwa and across from the station I see a perfect – I mean perfect – three foot left screaming across a coral reef. On the left side of the station it’s thick jungle. On the right it’s magnificent palm trees leaning over a white sandy beach. I walk down to the beach and simply cannot believe it. I paddle out into a lime green crystal-clear ocean for my first surf in Sri Lanka and on coral reef. 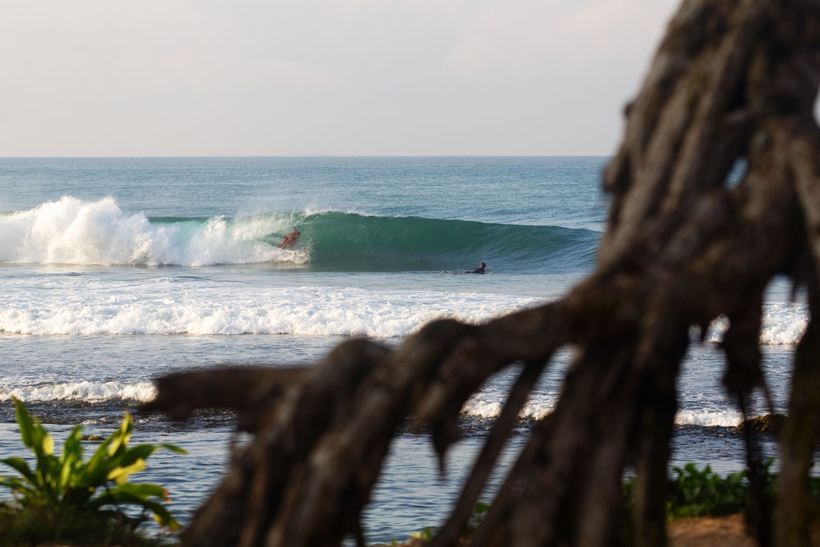 The wave comes in and I paddle. I’m a little shaky – it’s been some months off the board. The wave hollows out, the top feathers and it looks like it’s closing out. Aah shit. But no, it’s all good. Like J-bay it stands up I pull into the barrel. Below me, in water which is just inches deep, is a kaleidoscope of flashing colours. It’s like some hallucinogenic experience… You see Hikkaduwa is (well was back then) also one of the top dive spots for colourful coral reef and extraordinary colourful fish. Needless to say I surfed my brain out. I then found a room in a house with a beautiful Hindi family where I stayed for four weeks. Offshore every morning. Surfing on my own. Teaching yoga to a few. Basically heaven.

But the prevailing monsoon shifted and soon the onshore began. I looked at the map and spotted Arugan Bay on the east side. It looked like the perfect place to get some swell. I arrived in the village about six kilometres outside of the point to a beautiful, untouched-by-the-world, village. Remember this is 1974. The only way to the point was to walk or bullock cart… Two big bullocks up front and a cart of wood with huge wooden wheels and steel rims. No shocks my bro. To speed up, the driver would give the bullocks a kick in the nuts, or flick them with his little whip. Time back then was super slow. No rush. 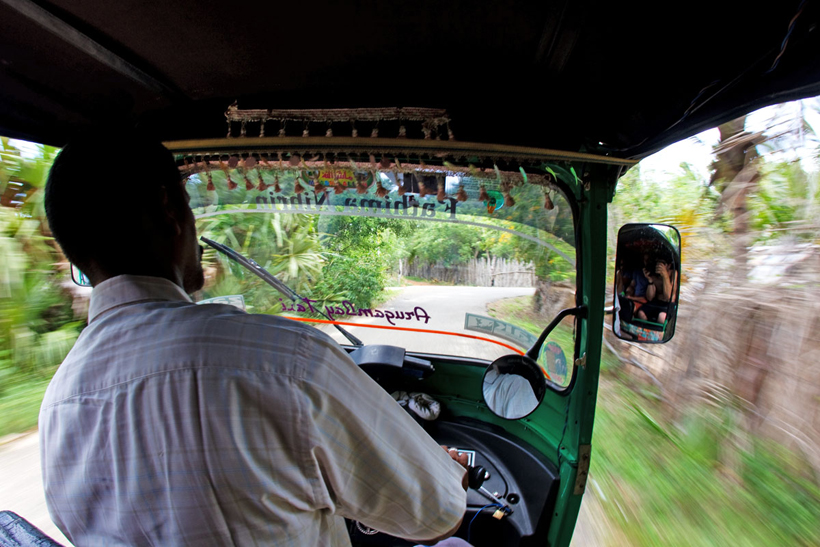 I arrive at the point. There’s not much else besides a small fishing hut and palm trees. I walk around the corner and hallelujah – cooking waves. Today it might be a global surf mecca but there I was – a lucky man for six weeks on my own. Fish in abundance, fruit and veg everywhere, awesome! So quiet though than I even wished for just one more guy to paddle out.

(On the topic of solitude, I had always wanted to surf naked and Arugan bay was my chance. Nobody about. So I paddle out kal gat and as I paddle over the top of a peaking wave, the lip smacks me in the balls. I nearly fainted… Caught the next wave in and never tried the stunt again.)

The water is so warm that the wax on my board melted off. So I wrote a letter home to ask my brother to ask Spider [Murphy] and Heinsy [Derek Hynd] what to do. It took three weeks for my letter to get there and three weeks to get a reply. All that waiting and they had no answer. I was a pioneer of the early surf trip you see. Then I got the idea to use candle wax, and wax from the local bee keeper. It worked!

I left Sri Lanka three months later – surfed out. I headed to Europe overland through India, the Khyber pass, Afganistan, Iran and Greece, leaving my board with one of my older students in Colombo. 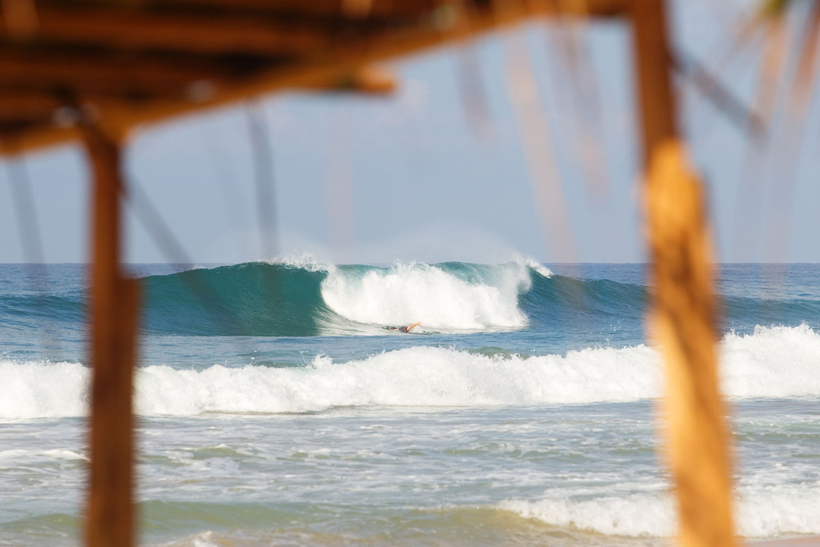 Many adventures and solitary surfs around the globe later – it was now 1980. I was returning from Hawaii, via the UK in the middle of a bust up with my girlfriend, hurting and confused. I thought why not go back to Sri Lanka? I arrive in Sri Lanka and go to visit my friend with whom I had left my board. A beautiful man and fine journalist – Justin Saparanadoo. We meet for tea in his bungalow and he says “I have something for you”. He goes inside and comes out with my 6.6 pintail. No friggin’ way! I can’t believe it. Well what to do now? Get on the train to Hikkaduwa and go surfing.

What a sad day that was…

When I left Hikkaduwa in the seventies it was nothing more than a narrow rough street with jungle and railway line on one side, and beach on the other. A few little huts where batik was made, and an extraordinary beautiful beach on which giant coconut palms hung over the sand, and the fishing boats floated in the channel. 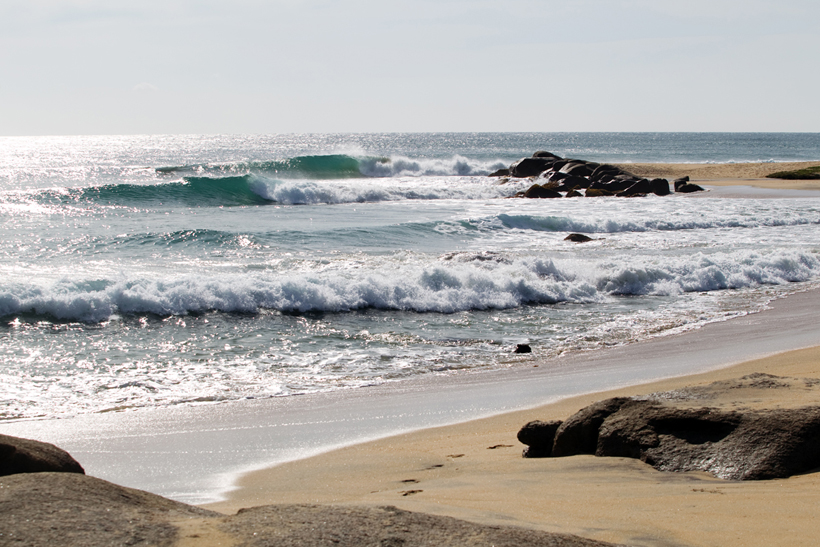 Now, the huts were gone (hotels my china) and the reef  had been been blown up for calcium to make cement. The batik shops and the ladies were gone. The trees were dying, hanging bedraggled, almost in shame it seemed. The fisherman were working in the hotels and the boats were rotting on the sand. Alcohol and tourism had arrived. At first I thought I had got off at the wrong station. But no my bru, it was what it was.

I stood there with my board under my arm and wept. My tears fell and splashed into the sand. I was gutted. I could not believe that such a paradise had been reduced to this shithole. At a loss for words, I applied my favourite buddha saying: “Observe the reality as it is, not as you wish it to be.” I turned around, walked back to the station, took the next train to Colombo and flew out two days later to Bali.

Bali in 1980 was fantastic. But that’s another story. 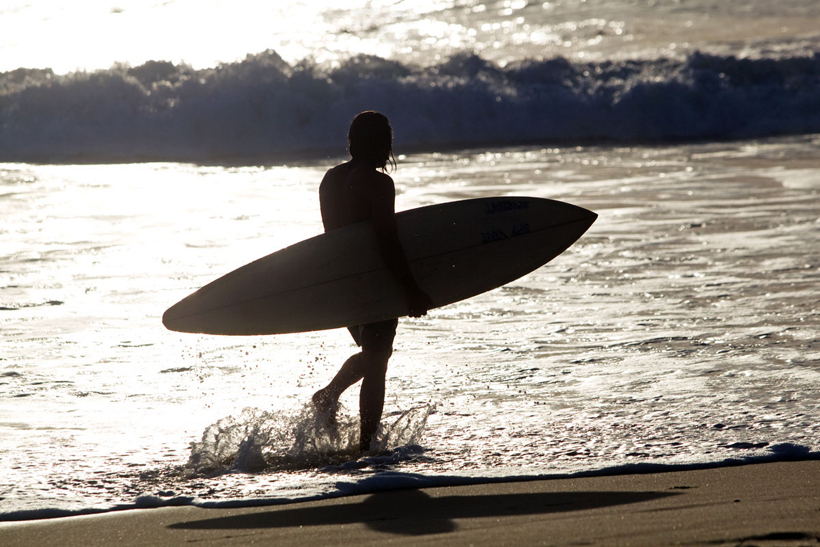 **Please Note: This article has been edited for brevity / clarity. 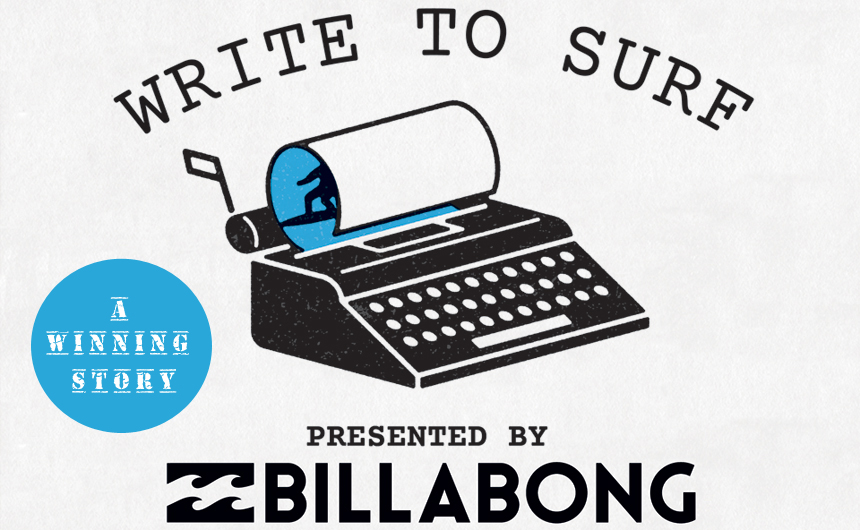 Send your stories to calvin@zigzag.co.za. One submission will be selected every six weeks to appear in Zigzag magazine. The selected submission will also receive a hamper from Billabong. Zigzag retains the right to use any work submitted for the Zag Surf Journo competition on zigzag.co.za as outlined in the rules and terms of the competition. Zigzag reserves the right not to award a published winner in the magazine every six weeks, depending on the quality of entries. Zigzag is not obligated to run any and all entries submitted, either online or in print. Zigzag retains the right to edit all work submitted for brevity and / or clarity. Please note: Prize hampers will only be delivered within South Africa.