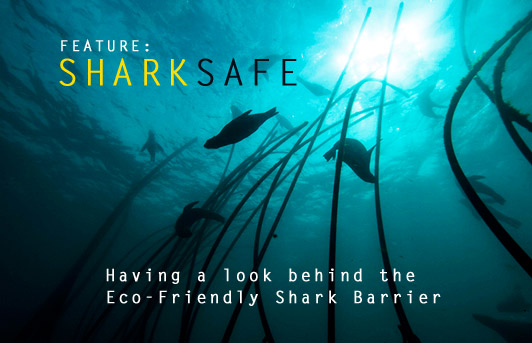 SHARKSAFE – Behind the Eco-Friendly Shark Barrier

A team of Stellenbosch University (SU) researchers have developed an eco-friendly shark barrier, known as “Sharksafe”. They are heralding the barrier as an alternative for shark nets “which result in the death of thousands of sharks and other sea animals every year”. 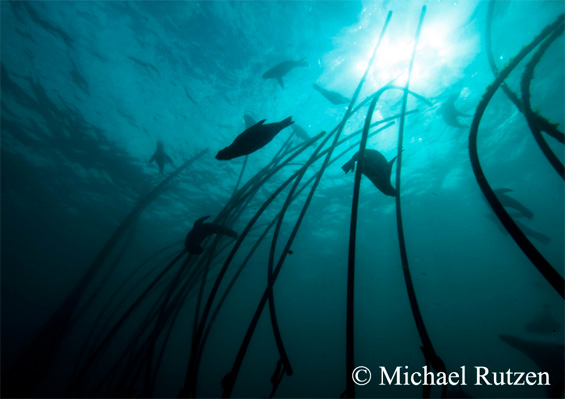 Seals and other marine life find swimming in between the shark barrier to be no problem at all.

Prof Conrad Matthee, Head of the Department of Botany and Zoology and member of the research group that has developed Sharksafe, says that because of existing shark nets shark populations are declining drastically. “It is estimated that the numbers of certain shark species have decreased by up to 90% over the past 20 years – particularly the number of great white sharks. Sharks are top predators and if they were to be taken out of the ecosystem, the latter will be disrupted. It is for instance speculated that there is a direct relation between the decline in shark numbers and the decline in other bony fish species.”

The problem, he says, is that shark nets also result in the death of many other sea animals, such as dolphins and sea turtles. “Great pressure is currently being put on countries that are using shark nets, to do away with these – among others Australia, USA, Japan, Argentina and South Africa. In addition to destroying the sea life, shark nets are also not 100% safe for humans since they are not placed right down to the seabed and there are also overlapping gap areas where sharks can swim through. So, even though you are safer in an area with shark nets, you are not 100% safe.”

He explains that certain shark species, such as the Zambezi shark found in KwaZulu-Natal, are sensitive to strong permanent magnetic fields, while others, like the great white shark in the Cape waters, do not like kelp at all. “Members of the team saw how seals chased by sharks swam into kelp and how the sharks time and time again turned away, not entering the kelp areas.

“Using these concepts we then developed a patent consisting of a rigid upright pipe which resembles kelp when it floats in the water. The structure also contains magnets to make it more effective for various shark species. The pipes are anchored to the seabed and stand upright up to the height of the water level during high tide. Our structure can resist waves of up to seven metres.”

The first test phase of Sharksafe was erected at Gansbaai and is currently redeployed by Mike Rutzen and Craig O’Connell – both part of the research team. “In our research we put bait behind the barrier to attract sharks, but no sharks swam through the barrier,” claims Matthee. “In addition to the fact that the barrier looks like kelp to them, they are also being deterred by the magnetic fields. If correctly deployed our barrier forms a ‘cage’ consisting of loose pipes without a net, resulting in no sea animals being caught while sharks are kept out effectively.” 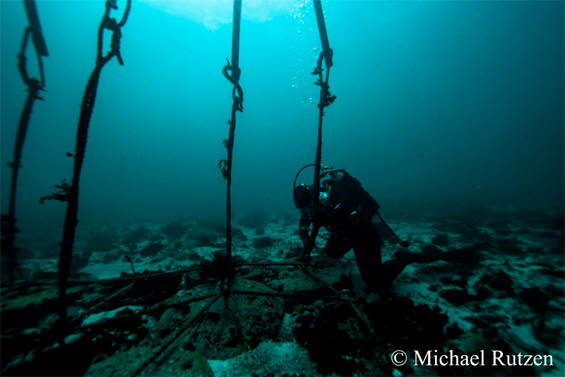 A diver fitting the “Sharksafe” barrier that resembles kelp into the seabed.

Matthee envisages that if the right material is used, the barriers will be able to remain in the water for at least 20 years with little maintenance required. “We are already establishing that marine life grows on the cement blocks which anchor the barriers to the seabed, which now forms an artificial reef.”

The research team intends to get permission to fence in the Muizenberg and Fish Hoek swimming beaches at an estimated cost of approximately R10 million each. The current patent consists of three rows of overlapping pipes, but in the deployment phase the idea is to employ five rows of pipes. They would like to implement this in collaboration with the developers of the so-called “mesh nets” which are currently being considered as alternative for shark nets – a finer woven net than the traditional shark nets.

“We hope our green alternative will be supported by the City of Cape Town as it is environmentally friendly and also much safer for humans. It will be wonderful if the Cape beaches which currently enjoy blue flag status, all rather opt for the green alternative as a preferred choice.

“We call our barrier ‘Sharksafe because it keeps people safe from sharks while simultaneously protecting the sharks. For our team it is all about shark research and the protection of sharks. That is the driving force behind this research.”