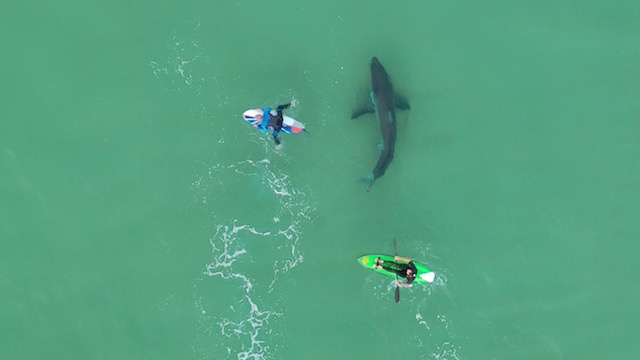 Last night ‘the Plett shark video’ went viral. We followed up for some backstory on the vid showcasing a girthy 12-foot white shark doing a close lineup inspection in Plettenberg Bay. Big sharks and Plett have become synonymous over the years, especially around this time of the year.

The video was shot by 14 year old lighty, Zachary Berman who had this to say of his first brush with fame: “I love flying the drone and normally just going for a little cruise every day to see what’s out there. But yesterday was something crazy! I saw the shark and I was monitoring it for quite some time. I saw it take a turn and it started to approach the backline in the direction of the surfers. It was then that I notified Marc Rodgers who works for the NSRI. I kept on monitoring it and was startled by how close the shark was to the surfers!! All I could think about in that exact moment was, I hope the shark doesn’t attack them! I was running around and calling my family to come and check out this crazy scene on my little screen!” He said. “It’s amazing to think that I was just going out for my afternoon drone cruise and I was able to capture such insane footage. I never thought that it would go this viral. It is quite overwhelming but I appreciate all the love that my footage is getting!”

According to NSRI Spokesperson, Craig Lambinon, the increase of shark activity at this time of year is part of the normal aggregation of these animals that take advantage of natural prey like seals and fish, such as yellowtail, close inshore.

Social media over the years have seen videos like this pop up fairly regularly with pretty much all of them having happy endings. But what happens one day when the ending is more in line with that old 80’s shark horror flick, Jaws? One way to combat this was brought up in the comments section by regular Zag photographer Pierre de Villiers.

“I’ve said for a while there needs to be an international manouevre that a drone pilot can perform to warn people… something that catches attention and says SHARK! One day it’s not going to end so well, is the pilot just going to film the shark chowing someone? Those people could have been warned way before the shark got close to them. It’s the same as with every shark spotting… Someone sees a shark, tells everyone, and we all go in… no panic, quick and easy.”

On the other hand, perhaps it would be best that surfers don’t know the shark is there. If there is panic, there will be splashing which sharks are attracted to, and the shark could also possibly sense the fear and consider this the normal reaction of “prey”.

According to Michael Herbst, ‘These guys had no idea the great white was there until someone yelled ‘shark!’ They said they came out the water so fast and the beach was cleared by the lifeguards. For these surfers, it was their lucky day and they will never forget what happened out there.”