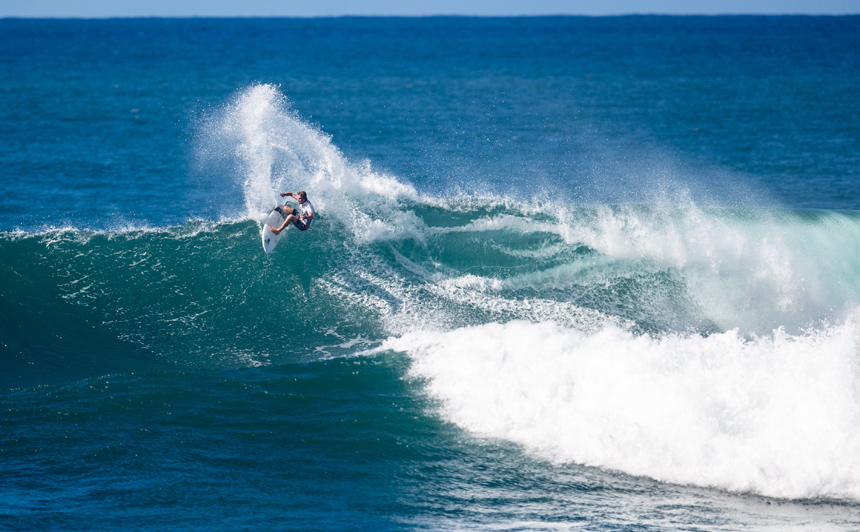 An underdog Final emerged from the star-studded 112-man field at the HIC Pro today, with North Shore’s Kiron Jabour (HAW taking the hard-earned win after starting from Round 1 and besting an international Final that included O’Neill Massin (PYF), who placed runner-up, Beyrick De Vries, in third, and Slade Prestwich in fourth.

The 30-minute Final was a waiting game that tested athletes’ patience and positioning, but finally, at the halfway point Massin struck first with a strong opening manoeuvre and another powerful top turn that earned him a 6.33 (out of a possible 10).

Behind him, Jabour dropped into the best wave of the heat and revved up the crowd with consistency and precision as he successfully completed three solid manoeuvres to close out the ride. He garnered an excellent 8.00 to take the lead and then the battle between he and Massin began. 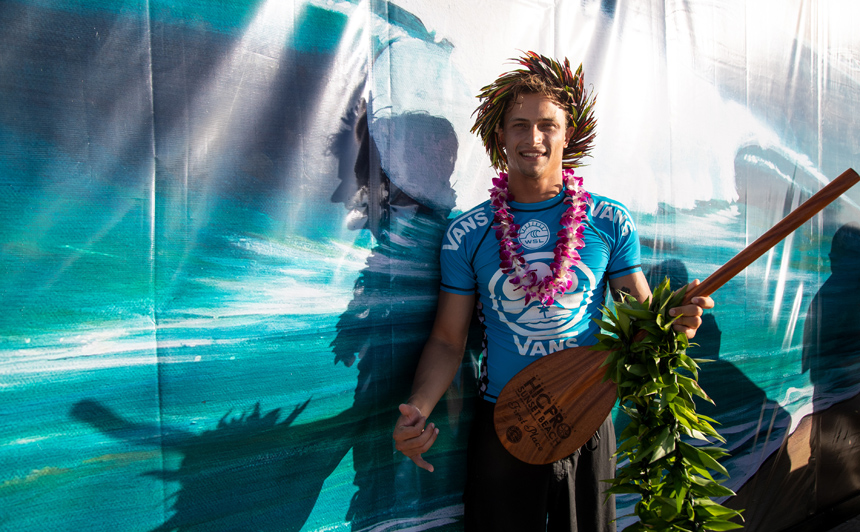 “All those guys were ripping the whole event, I really enjoyed all of their surfing,” said Jabour after the awards ceremony. “O’Neill was surfing with a lot of power, he was getting high scores in every heat.”

The Tahitian’s second wave was under priority and saw him knife through the lip and use his power surfing style to earn a 5.07 to take the lead from Jabour. But within minutes, Jabour was on his second wave of the heat, a 6.00, and demonstrated total control in the most critical section of the wave.

With the clock ticking down, the two South African surfers opened their campaigns, a 5.00 for De Vries and 3.33 for Prestwich. De Vries has had past success at Sunset Beach when he earned a perfect 10-point ride during the 2013 Vans World Cup – a wave that was hailed as the best barrel ever surfed in competition at Sunset’s west peak. However, his and Prestwich’s determination was not enough to catch Jabour or Massin. 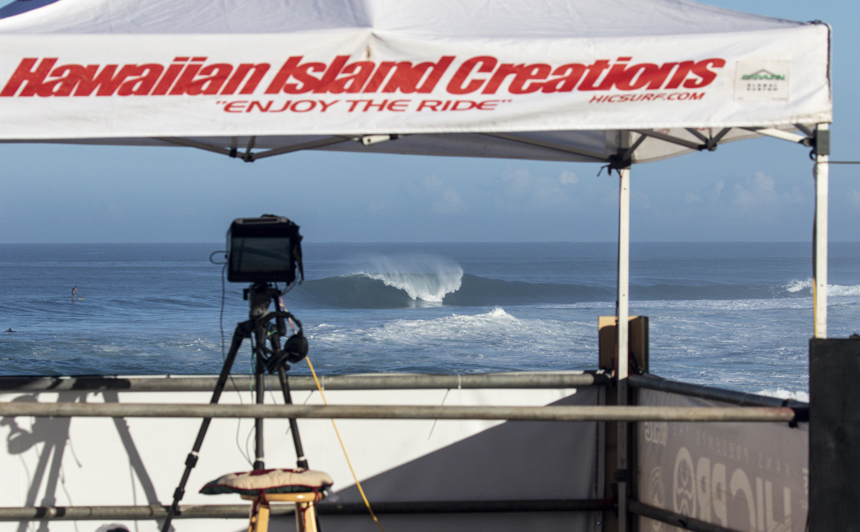 “The Final was really tight, everyone was pushing each other really deep the whole first half of the heat and we missed a couple sets because it’s been dropping all day and no one knew if there was going to be bigger sets coming in,” Jabour said. “But then there was a flurry of waves and it worked out I got the best wave of the heat. I still needed a score at the end because O’Neill was the only guy with two waves, so I was fortunate enough that mother nature sent me a set and I was in the spot for it and got the score I needed.”

Jabour has traveled the world this year chasing QS events, however, a win has always evaded him until today, and his sweet victory happened to take place in his own backyard.

“Winning out here at Sunset is so special to me, it’s right down the street from where I grew up. It’s always been a dream of mine to win the HIC Pro and I can’t believe I won it, I’m so happy and stoked to go into the Triple Crown with a good confidence boost.”

This local qualifying event sets the stage for the Vans Triple Crown of Surfing, with the first event of the series, the Hawaiian Pro, taking place at Haleiwa Ali‘i Beach Park from November 12 – 24. Last year, Jabour Semifinals in the HIC Pro and made Quarterfinals at the Hawaiian Pro, so he is off to a great start on improving his results in Hawaii after today’s win. 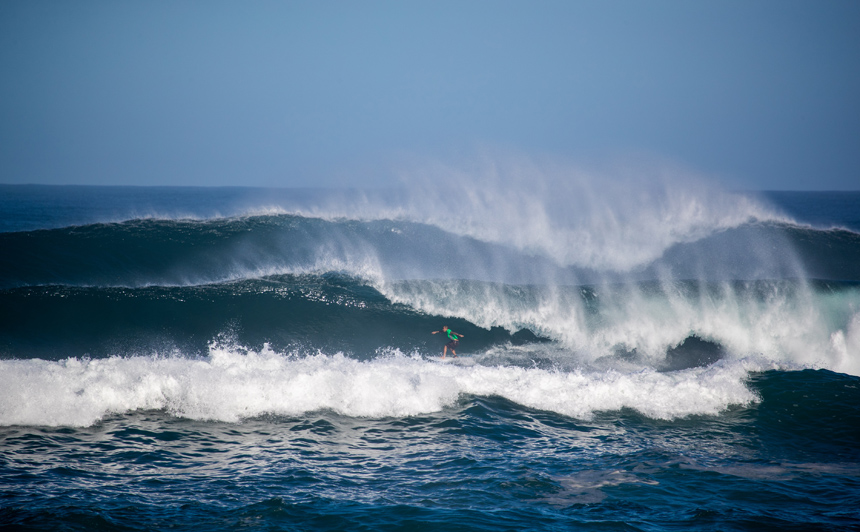 Beautiful conditions on hand for the final day of the 2018 HIC pro presented by Vans at Sunset Beach, Oahu, Hawaii, USA

“I’m just really happy to be in the Triple Crown and to start off like this is perfect I can’t imagine anything better. I really want to get the Triple Crown, that’s always been a dream of mine growing up here. Besides the World Title that’s the next best thing and I’m going to give it a good go this year.”

Alongside Jabour’s win, Massin became the WSL Hawaii/Tahiti Nui Regional QS Winner today, the first Tahitian to take the title since the two regions combined three years ago. The race heated up when the #2 regionally ranked surfer, Josh Moniz (HAW), was eliminated in Round 4 today, which left the window open for Massin and Maui’s Ian Gentil (HAW) to battle for the 2018 title. Massin now earns a seed into all 2019 QS 10,000 events up to the mid-year date and all other QS events for the full year. He also received a Travel Scholarship Presented by Vans to help with his campaign around the world.

Massin spends almost four months every year on the North Shore to gain experience at the world’s premier surf breaks and compete for the season.

“I spend a lot of time here and I try to learn every time,” Massin continued. “Sunset is a hard wave, Haleiwa is a hard wave, it’s really hard to go in Pipeline and get waves, so I have to learn more and more, but it’s good. Sunset is a special place for me. It’s a powerful wave with big water, so sometimes you’re a little bit scared but I’m stoked because it’s such a good wave and now I have good memories here.” 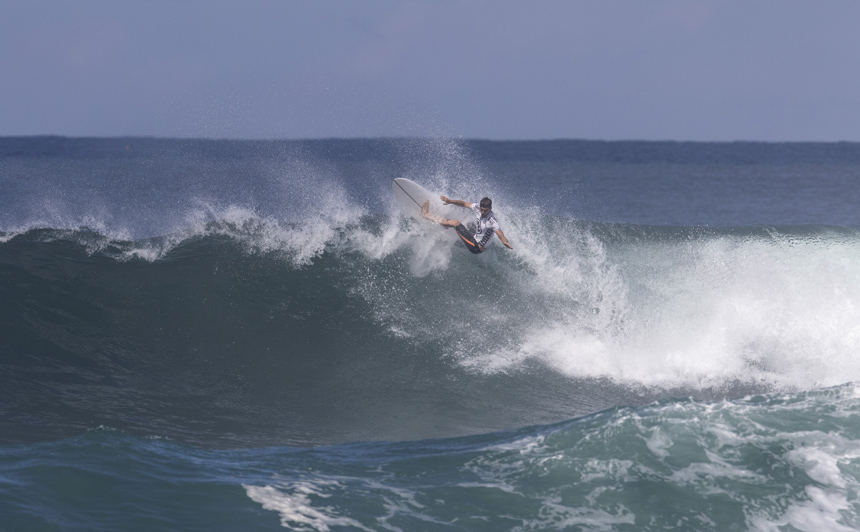 Slade Prestwich of South Africa advances to the Quarter Finals after placing second in Heat 5 of Round Four at 2018 HIC Pro presented by vans at Sunset Beach, Oahu, Hawaii, USA

The WSL’s competitive focus now shifts down the coast to Haleiwa for the first event of the 2018 Vans Triple Crown of Surfing (VTCS), the Hawaiian Pro, which has a holding window of November 12 – 24. Each event of the VTCS will run on the four best days of surf within the event’s holding window, determined by Deputy Commissioner Travis Logie for the Men’s QS 10,000’s and Commissioner Kieren Perrow for the Men’s CT.
Athletes listed in 1st through 4th