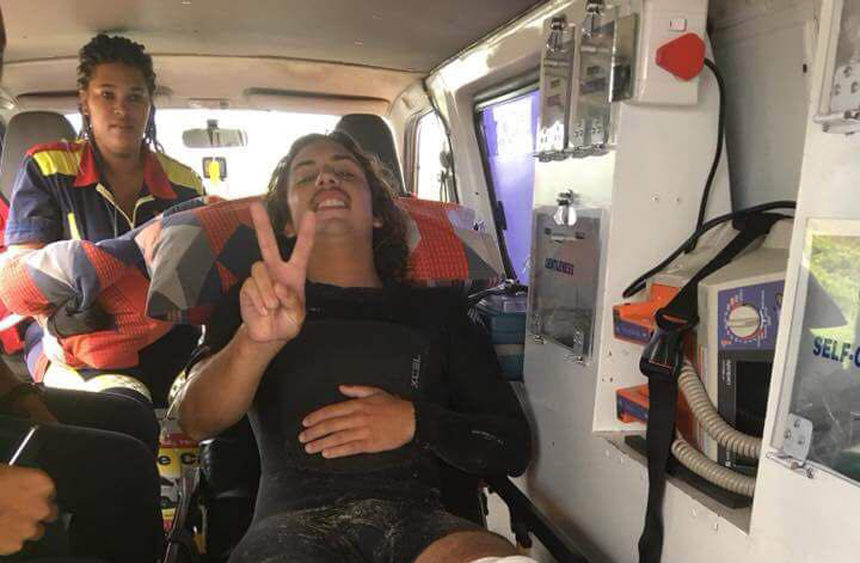 Ross Spowart, the new Cape St Francis celebrity had a run in with a local that left him in stitches earlier this week. Whilst out in the line-up he had the misfortune of getting into a rather one-sided fight with a juvenile White Shark, which he has affectionately dubbed Boris (what a sense of humour). Good news, young Spowart is on the road to recovery and will be back in the water ASAP. Whilst in the hospital with time on his hands Ross talked us through the day’s events:
(Zag) First off let’s start with how was the surf?
(Ross) The surf wasn’t great, just a small to medium sized right handed beach break just below seal point in Cape St Francis. The wind that day had just switched from a light west to a light east so the conditions were pretty glassy at least.
Any pre-surf heebie-jeebies or eerie feelings in the water?
Surfing and fishing are my passion so I often apply my knowledge of fishing to surfing conditions and how sharky it’s looking. That particular day was quite strange conditions. The water was a warm but dark green colour, the sky was filled with clouds and the ocean was quite misty, these conditions being perfect for a species that solely relies on the element of surprise to hunt its prey.
The encounter itself, were you paddling or parking off when it all went down?
I had caught two medium sized right-hand runners, on the last wave I jumped off the back and began paddling straight out to get out of the white water, my plan was to try sit a bit wider than everyone else so I could try to sneak a couple waves. As I managed to clear the white water and head into the clear water I stopped to get my bearing, I sat up on my board and in the next three seconds, I got hit on my left leg by what I thought was a train. Fortunately, I managed to stay on my board, the shark immediately swung its head around and managed to gets its bottom jaw to sink into my board. Then in what felt like slow motion, I watched the top jaw of the shark come down on the left-hand side of my left knee and just rip, pulling me off my board. The shark then suddenly half breached to my right and I scrambled to get on to my board and paddle for my life it was about 5 seconds of complete cavitation and no movement as I was so alarmed by what had just happened. Luckily a big closeout broke just behind me and I managed to make my way to the beach. 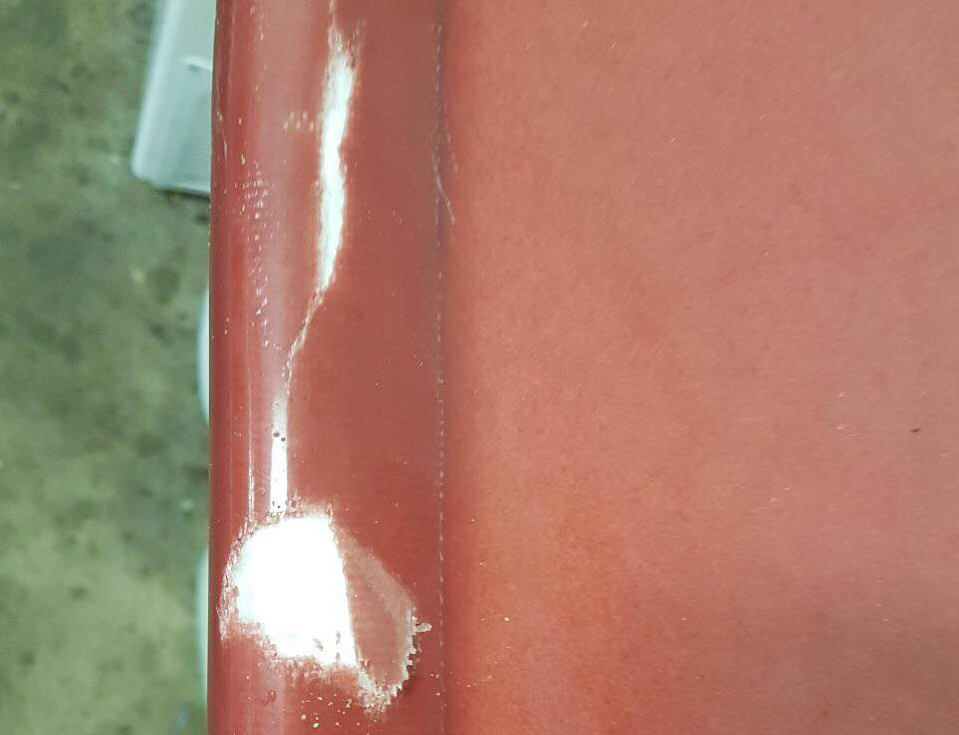 A ding or two serving as a little reminder of the ordeal, nothing a little resin and cloth can’t fix.

What was going through your mind once it happened as well as after?
Whilst the shark was attacking me all I could think about was that this massive animal is going to completely rip me to shreds. When I managed to make it to the beach I just lay on my back and completely chilled out and let the people that were helping me do what they needed to do as it would have been pointless for me to panic, there was nothing I could do other than control my breathing.
Yoh, props for keeping calm, keen to get back in the surf seeing as now you’re cooler than Mick Fanning?
Now that Mick and I have something in common he could drop me a message and we can compare our experiences, this incident will have zero effect on my surfing and I will be back in the water as soon as I get a new suit and fix the bites in my board.

Boris the shark at least left ross an apology letter for the misunderstanding, hope he has dental insurance.

What was the damage besides the suit and how long is the recovery?
The shark made quite an uneven cut from the top to the bottom of the left side of my left knee and one puncher wound in my shin, he was even kind enough to leave a tooth in my shin for me, luckily for me Boris missed the bone and only managed to knick one tendon but nothing that can’t be fixed, what he did manage to do completely exposed my knee cap which was not such a laka sight.
View on sharks/Boris before and after it all?
My view on sharks has not changed, I have huge respect for these animals and understand the fact that every time I go for a surf I am entering their habitat unless Kelly invites me to surf at the surf ranch.
Awesome to see such a positive attitude come out of the whole ordeal, we wish you one helluva speedy recovery Ross and look forward to seeing you in the surf soon. Whilst you here, take a look at an article that unpacks the relationship between sharks and surfers. Click the images below to enlarge them: 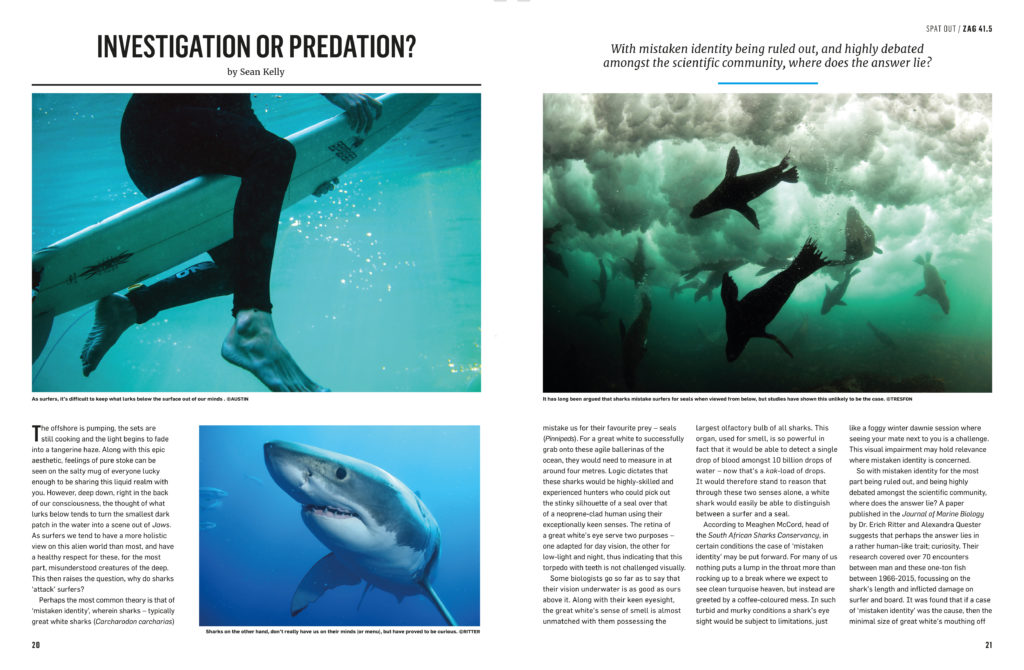 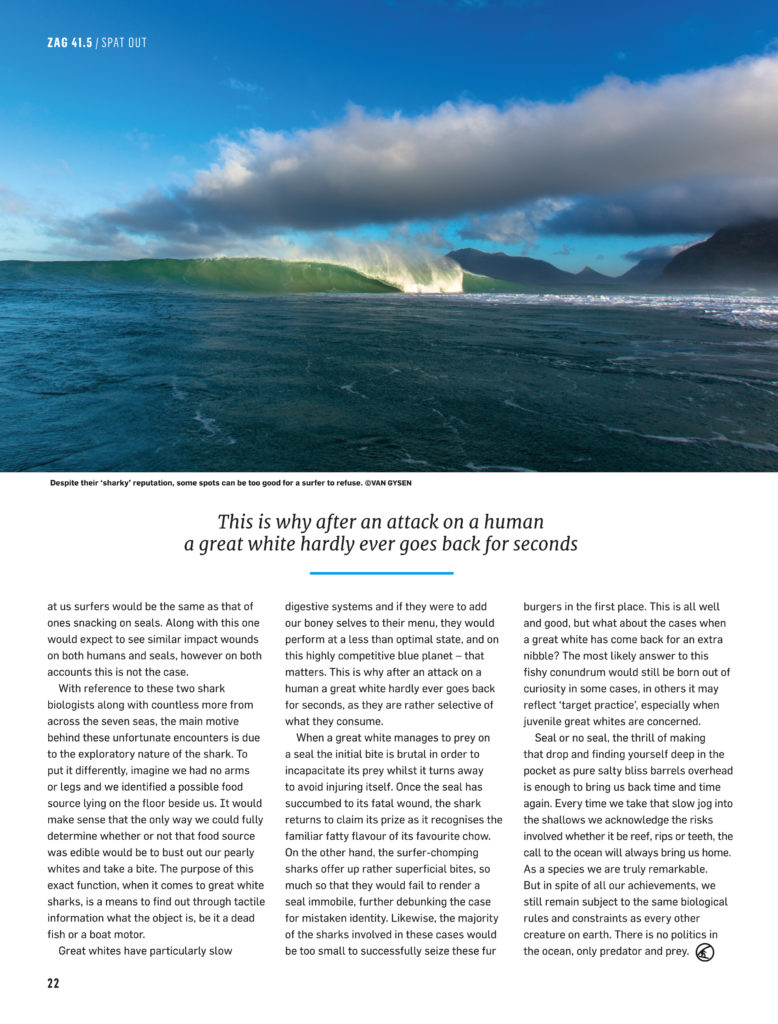