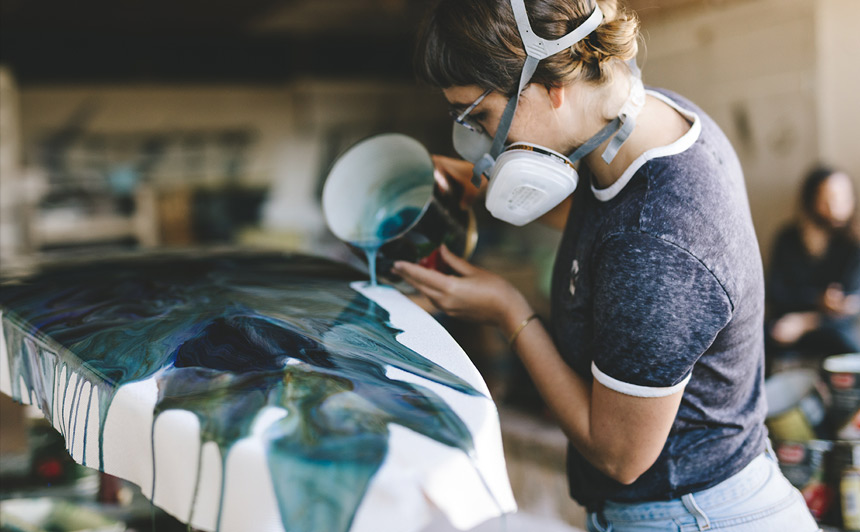 Issue 43.8 is all about you, dear reader, the very people who keep the wheels of South African surfing turning. In this excerpt, designer, illustrator and artist Wonder Meyer talks about her unconventional upbringing and beloved collaborations with her dad and master craftsman, Mikey Meyer.

[See more of Wonder’s work on @wondermeyer and get the new issue of Zag, on sale now. Or better yet become a subscriber now.]

My mom worked full time as a pharmacist, so dad was at home with me from when I was little. He started out doing ding repairs just after I was born and then moved onto shaping. My childhood memories are filled with running out to the “shaping room” – our shed in the backyard – and eventually there was a well-worn path between the shed and the house.

These memories are still tinged with the smell of resin. Dad converted our garage into a glassing room and the fumes were always creeping out, thick and heavy, but I loved it! 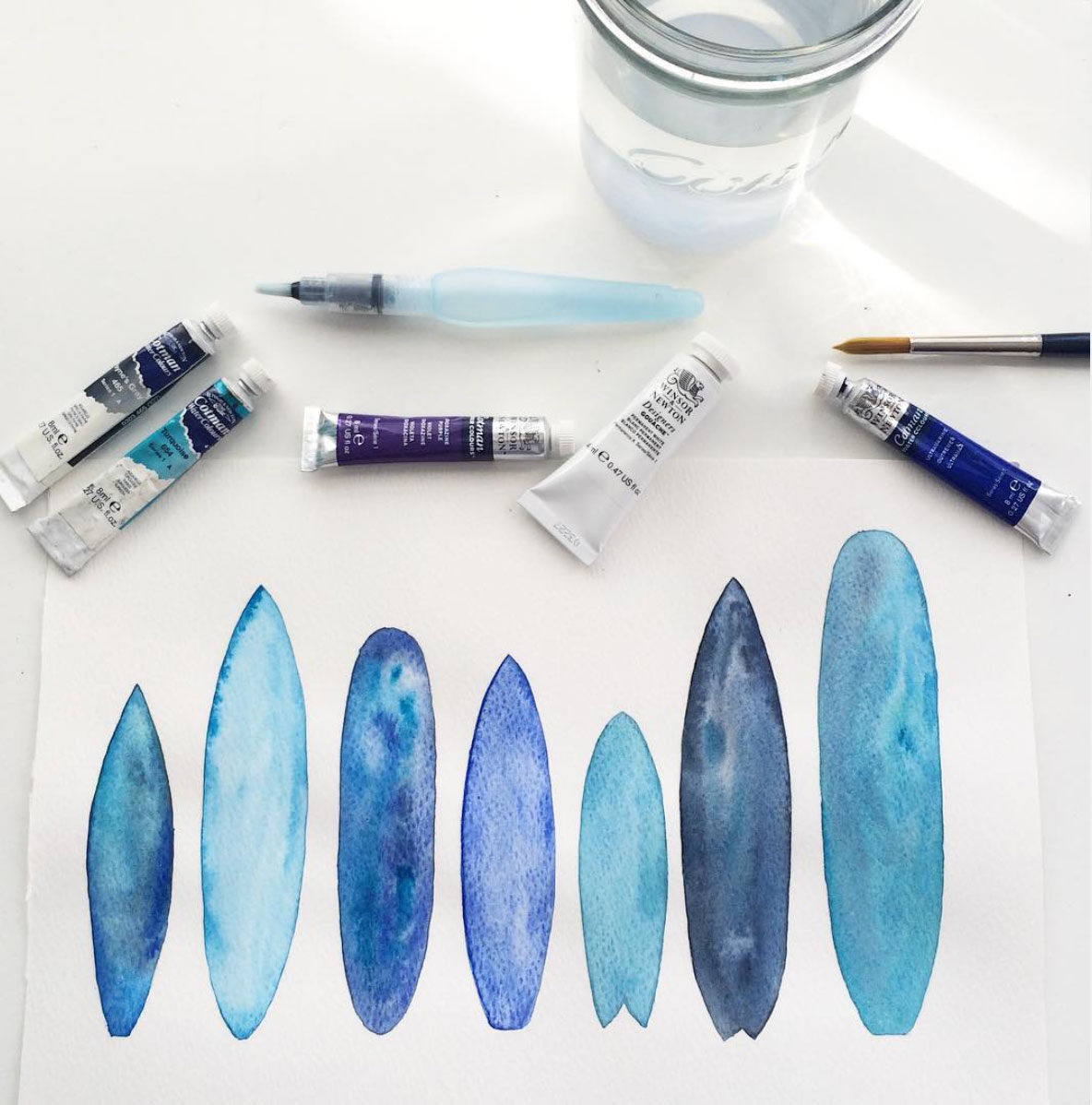 Tools of the trade.

When I was around six, dad did a stint with Jeff Bushman in Hawaii. My mom and I went over to join him and stayed in a tent in a sugar cane field for a few months. My mom and dad had a great time, but it wasn’t always great for me – I remember a lot of centipedes under the tent!

Surfing has always been such an integral part of my dad’s life. Every conversation revolves around surfing; everything is related to surfing, every analogy he uses is based on surfing. My mom surfs as well – she’s really good, actually – so I really had no choice in the matter. My dad could be quite demanding, though. When I first stood up, I stood up goofy but he said, “No, no, we live in J-Bay, you can’t be goofy!” That’s how I became a natural-footer.

I was seven when my parents had this amazing idea to go sailing for three years with two friends. We sailed from Cape Town to St Helena Island, then Brazil, the Caribbean, through the Panama Canal and on to French Polynesia. But the guy who owned the yacht was in a hurry to get to New Zealand because his wife was there, so it turned out to be more of a boat delivery than the exploration they had planned. We sailed right past the Galapagos, Tahiti and Bora Bora – we could see them from the boat but this guy insisted on sailing right past! 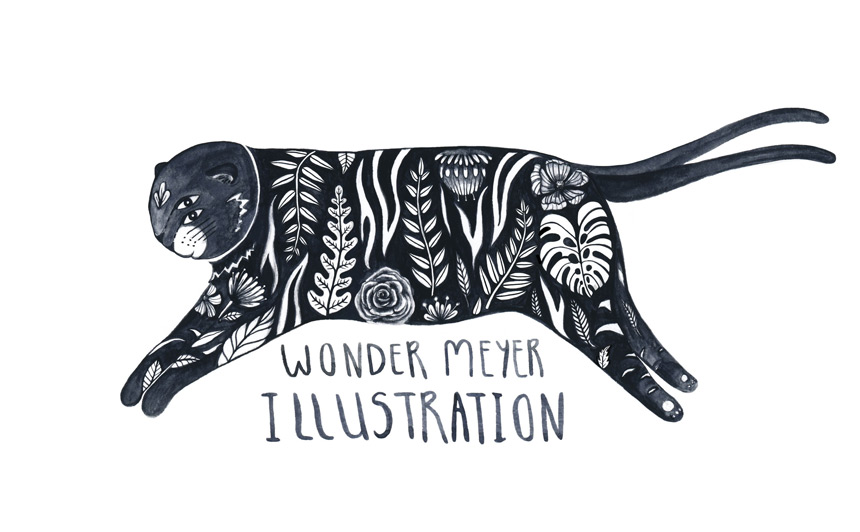 My parents were gutted, so eventually, we mutinied in the Cook Islands. I went to a local school for a few months and it was awesome. We went to school barefoot, played in rock pools at break time, and hula dancing was part of the curriculum.

We spent some time in New Zealand, then a year in Australia where my dad shaped for Greg Webber and Rod Dahlberg. We pretty much drove across the whole of Australia. Then we went to Indo and Malaysia, and finally back home.

In hindsight, that two-year trip was life-changing. Even at that age, I learned to see the world from a different perspective.

After I finished school I took a gap year to work in a surf shop in Ireland, traveled Europe and Indo a bit, then came back and started freaking out about what to do with my life.

Until then, I’d never done any formal art classes. I’d always drawn, though. I used to line up my teddies and take their portraits, draw my pets, page through National Geographic and draw all the animals. I had no lessons, but I used to buy canvasses and paint, sketch, doodle. I drew on the yacht, in the backseat of the car traversing Australia, everywhere… it was just something I always did.

When I was trying to decide what to study at uni, the only advice my parents gave me was to do the thing that doesn’t feel like work; the kind of thing I like to do in my spare time. Art was the natural fit.

I’m really interested in ephemeral themes, or things that cannot really be expressed in words, using illustration to express these intangible themes. I always use girls and animals and strange landscapes, which I think was inspired by my early travels and being exposed to so many different places. My commercial stuff is far more colourful, less dark and weird. 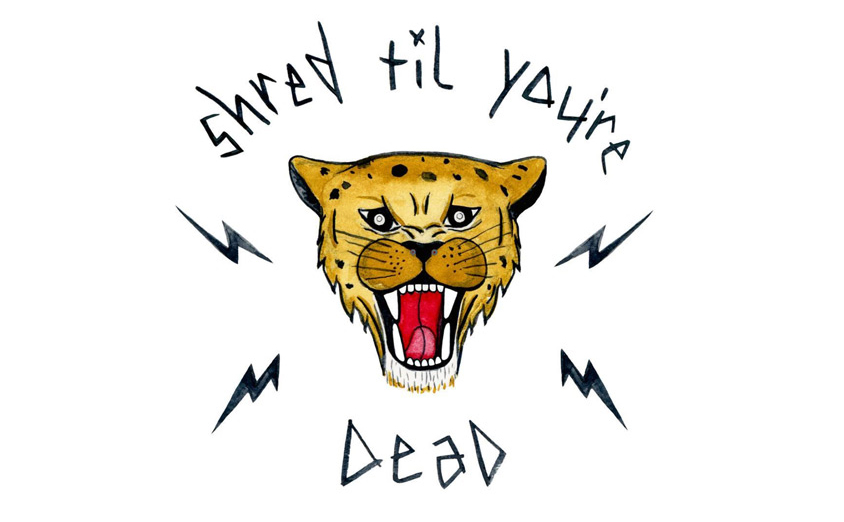 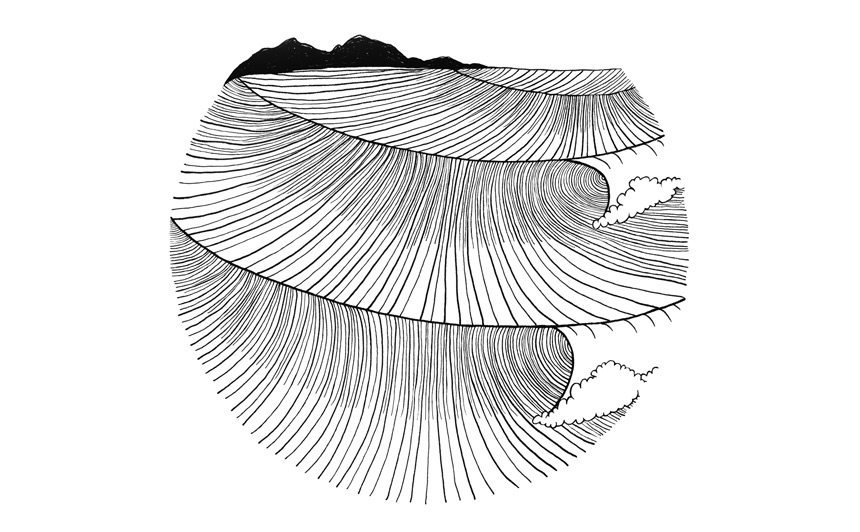 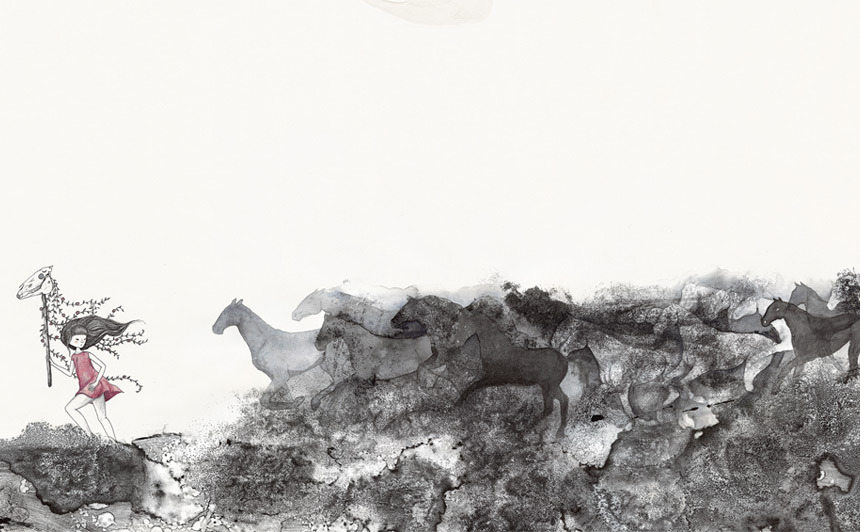 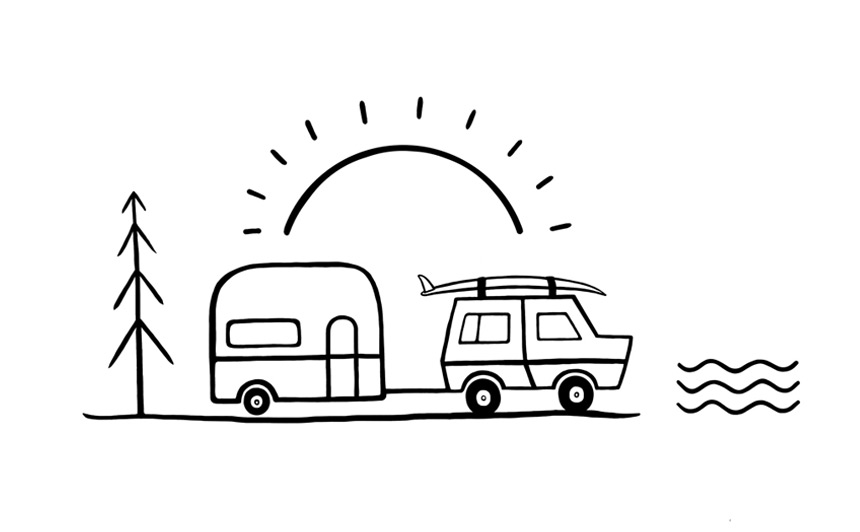 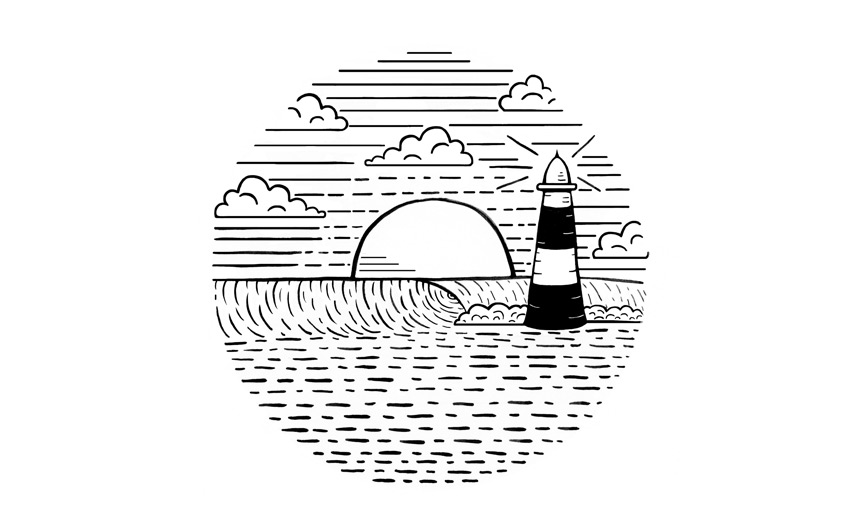 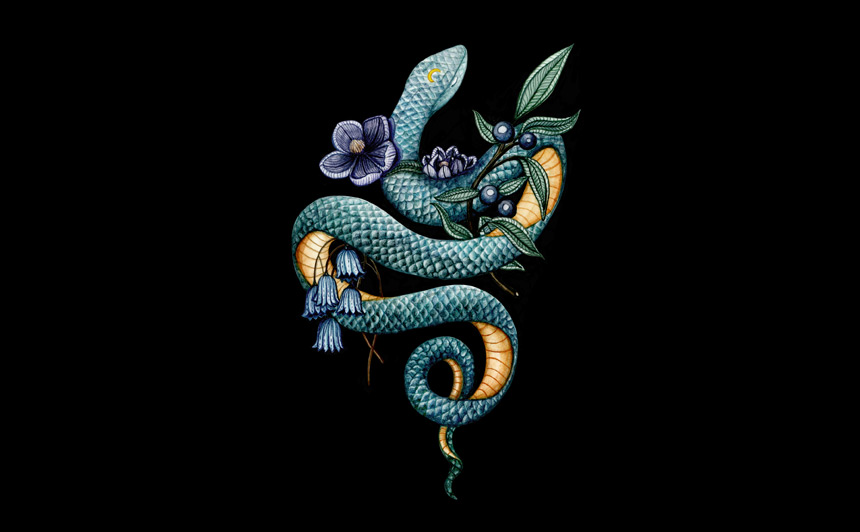 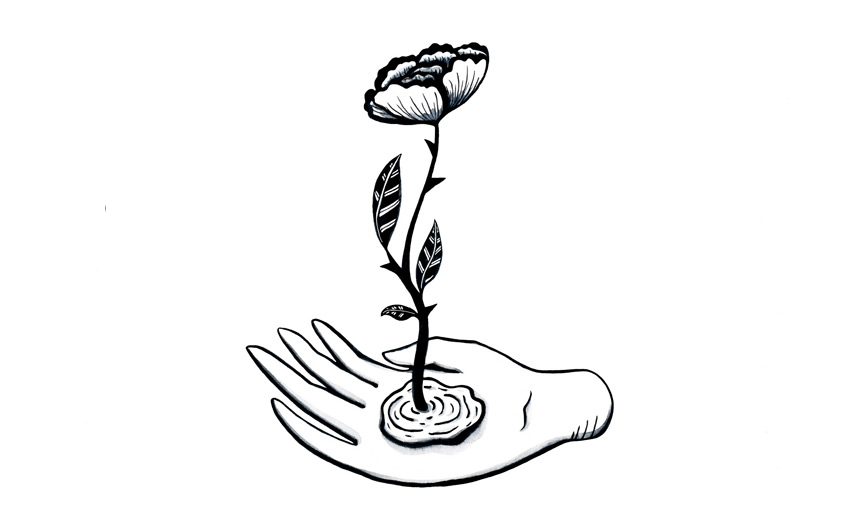 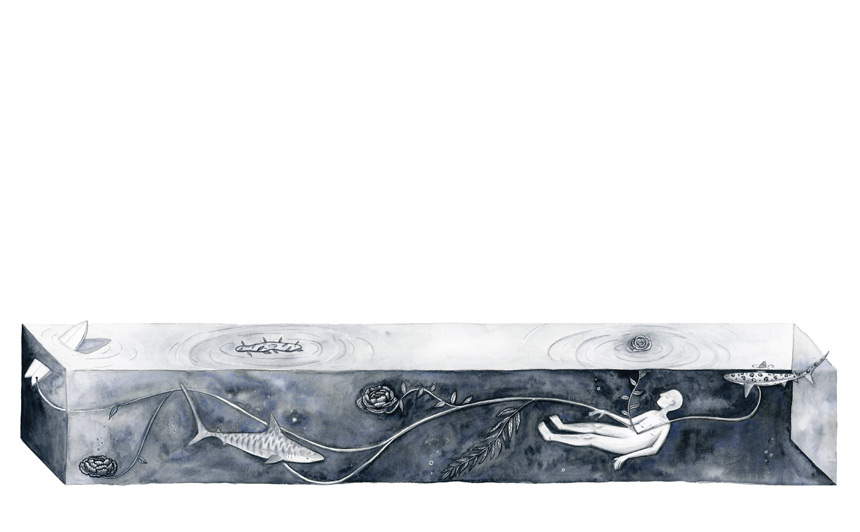 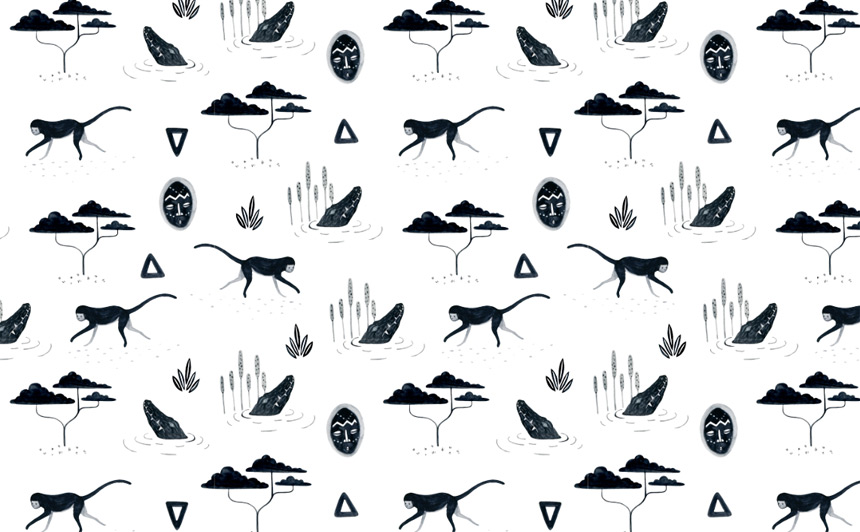 I don’t consider myself a “surf artist” even though I started doing surf apparel straight after uni. The first shirt I did was for Country Feeling*, when Cheron Kraak invited me to do a design for them. Cheron has always been incredibly supportive of local artists and my work, right up until today. Then RVCA asked me to do a shirt design. They liked the design and the other stuff that I was doing, so I was invited to be part of the RVCA Artists Network Programme, which is pretty amazing.

Throughout this, I’ve always been really interested in the process of board making. I was always in the factory; playing with the off-cuts, drawing pictures in the dust of the sanding room. I really wanted to get into it and shape my own boards, but my dad always discouraged me. He would come home covered in foam dust, reeking of fumes and said it was not a healthy environment. He didn’t want that for me.

I had friends who asked for custom designs on their boards and did a bit of that, but it was only after uni that I got into resin tinting. There wasn’t a point where my dad and I decided we would collaborate on these boards; it’s just something that happened along the way.

The timing was good because things had moved away from all-white thrusters to more retro-style single fins, which is what my dad is really good at making. But dad wasn’t so great at mixing colours and would often phone me to ask how to mix a certain colour a client wanted. Having a background in Fine Art, it’s something that comes more naturally to me, so I started helping him mix the colours when he was doing straight tints.

After that I started experimenting with abstract patterns, swirling the colours into each other. It’s way more difficult than I initially thought, but over time my dad and I have refined our tag-team process. 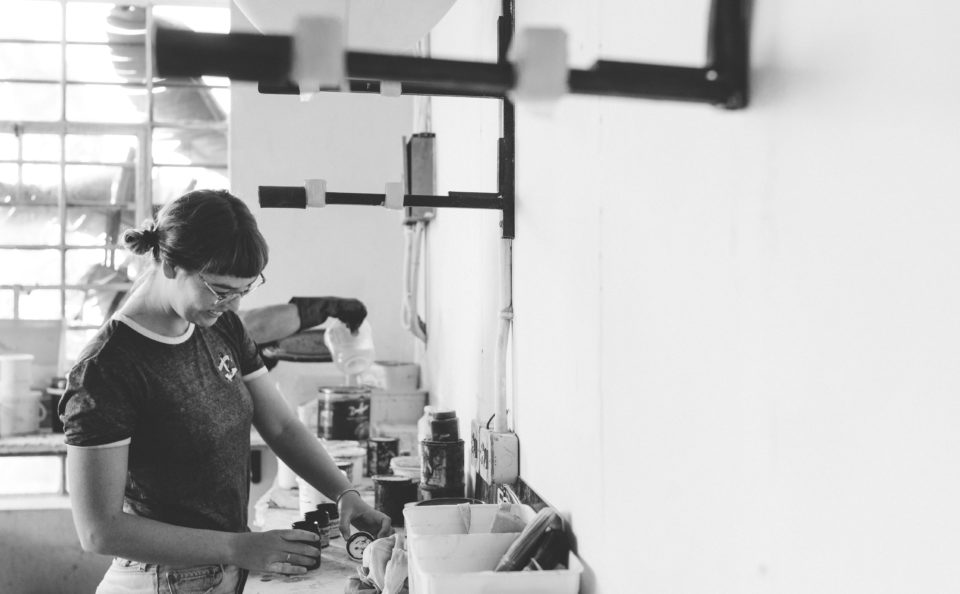 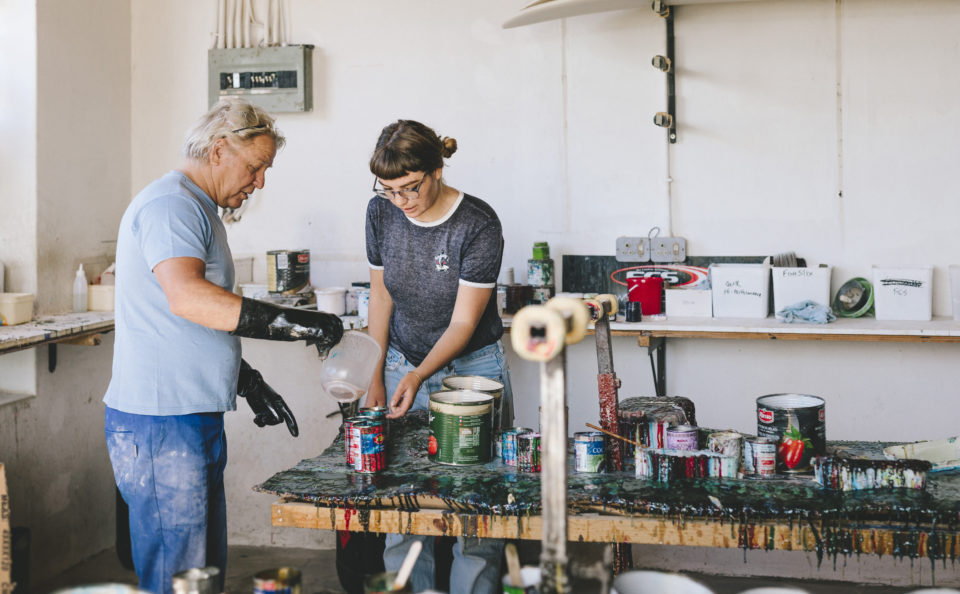 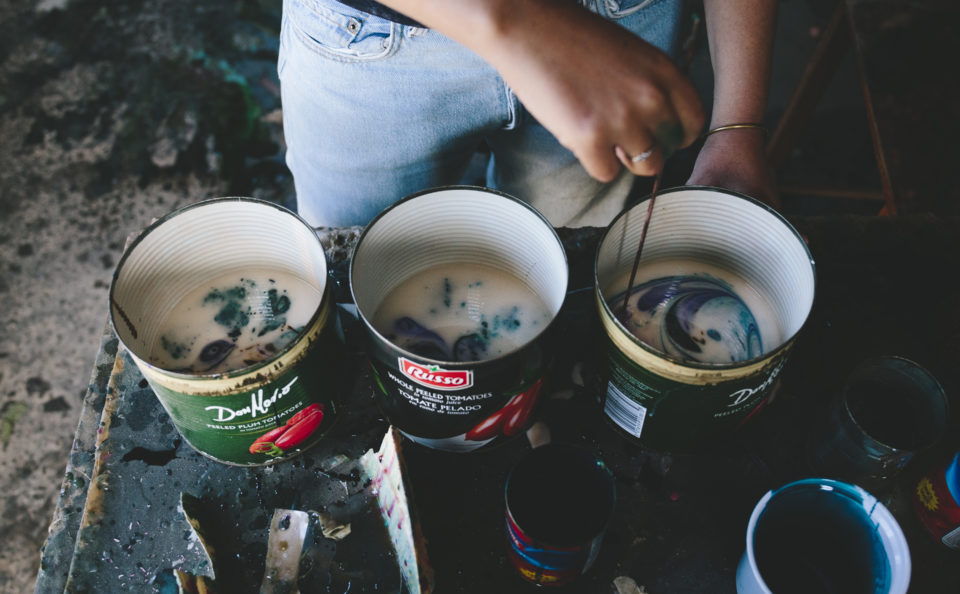 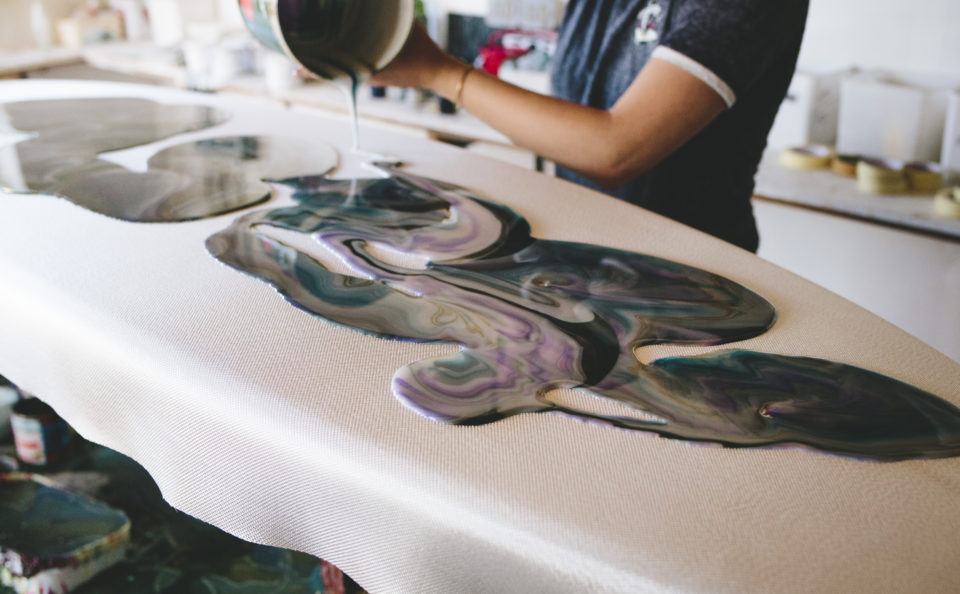 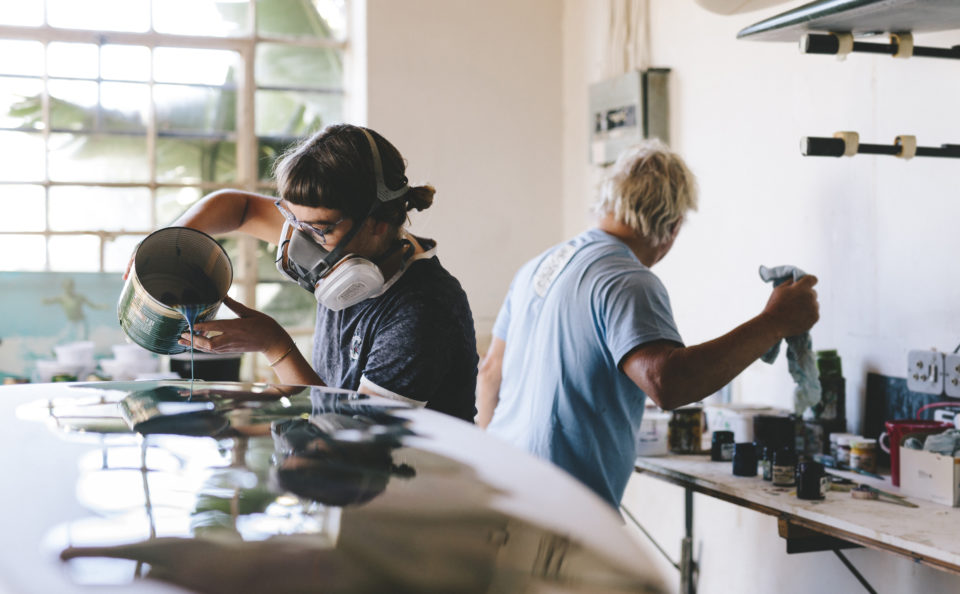 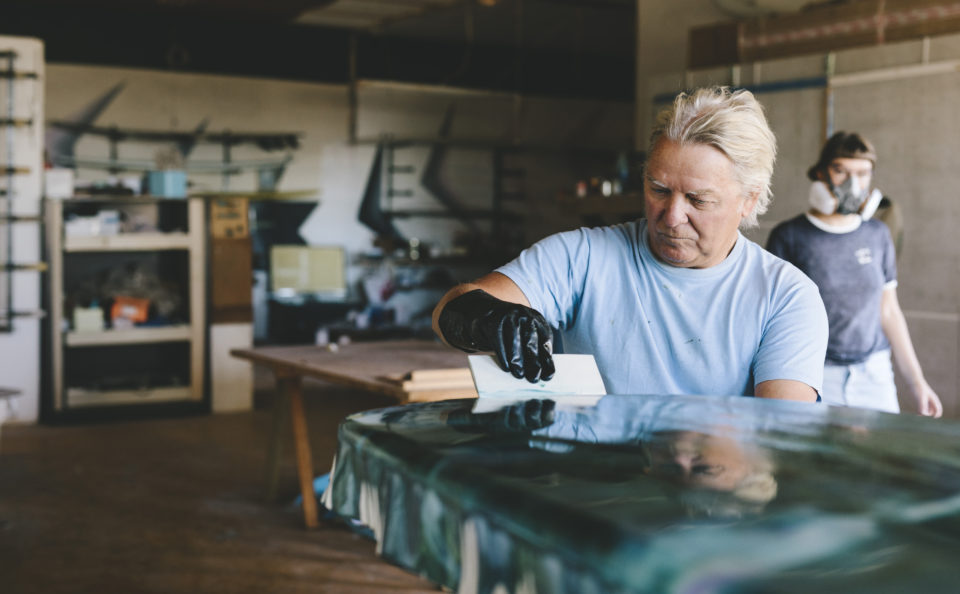 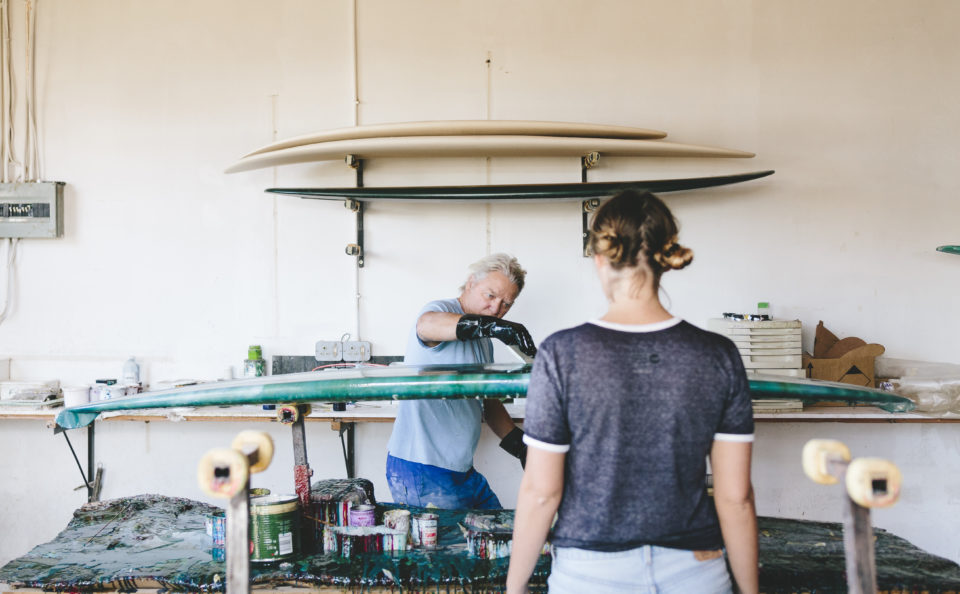 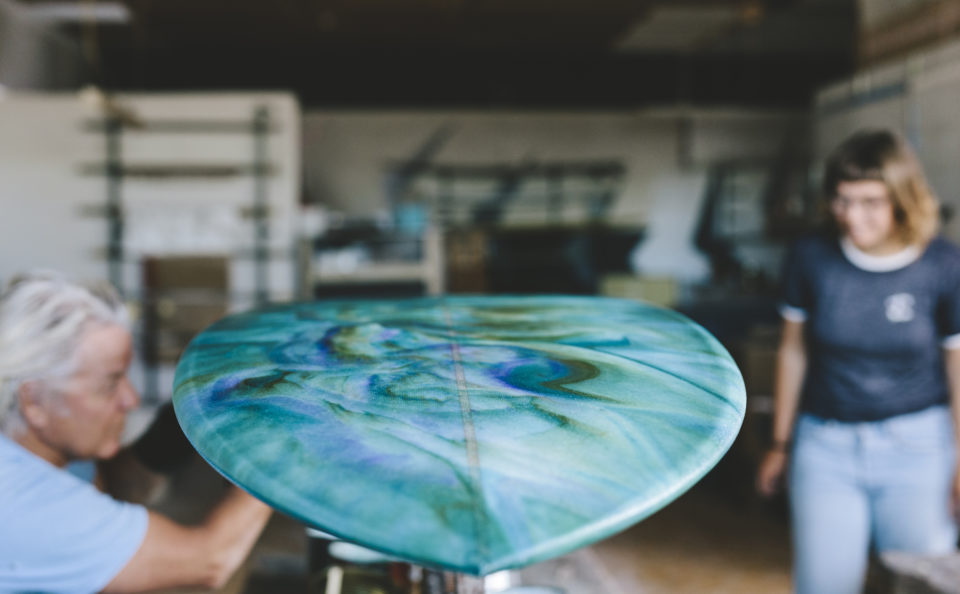 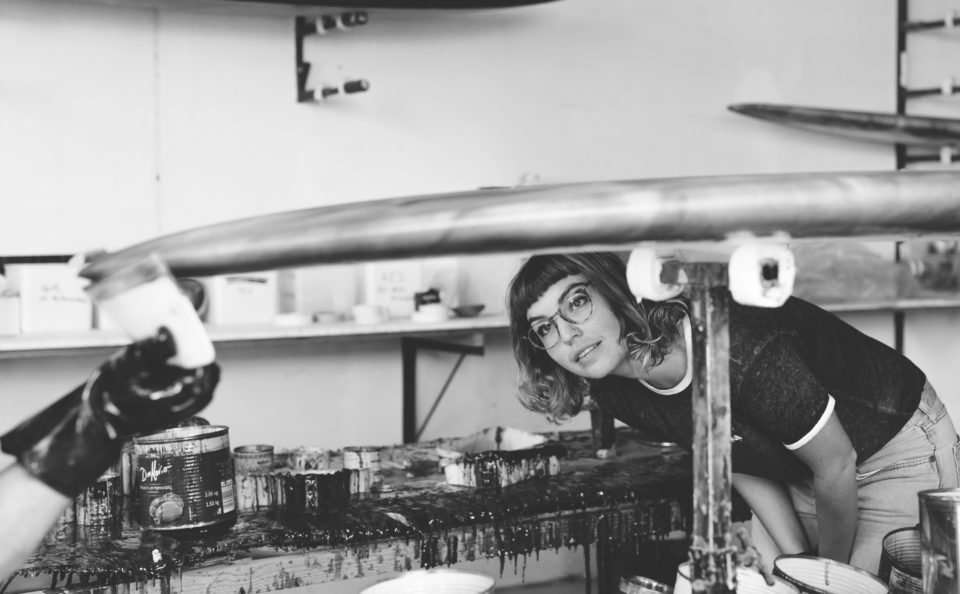 I start by doing a bit of research on colour combinations I think will work well together, mix the tints, and then do a lot of testing on pieces of foam and fiberglass off-cuts to get a better idea of the true shade. Once the right quantities of tints are mixed into the resin, catalyst is added and I pour the individuals colours into a bigger vat where they all combine, before pouring it onto the board.

It is such a fluid and organic process so it’s difficult to control the outcome, but I think as long as the colours are beautiful, you can’t go too wrong.

I try to avoid too much pooling and make sure the rails are properly wetted out for when my dad comes after me to do the glassing. He still won’t let me glass! I can do the mixing and the pouring, but the glassing remains his domain.

As soon as I’ve finished the pour, he works the resin into the fiberglass until it’s properly saturated, checks for air bubbles and laps the nose, tail and rails. Then come the fins, plugs and topcoat followed by a high gloss polish, which really brings the colours and patterns to life.

It’s such a fulfilling process, but the best part of all is creating something together with my dad.

*This story has been corrected from the printed version that appears in issue 43.8, which incorrectly states Wonder’s first apparel design was for Billabong, not Country Feeling. Zigzag sincerely apologises for the error which occurred in the editing process. 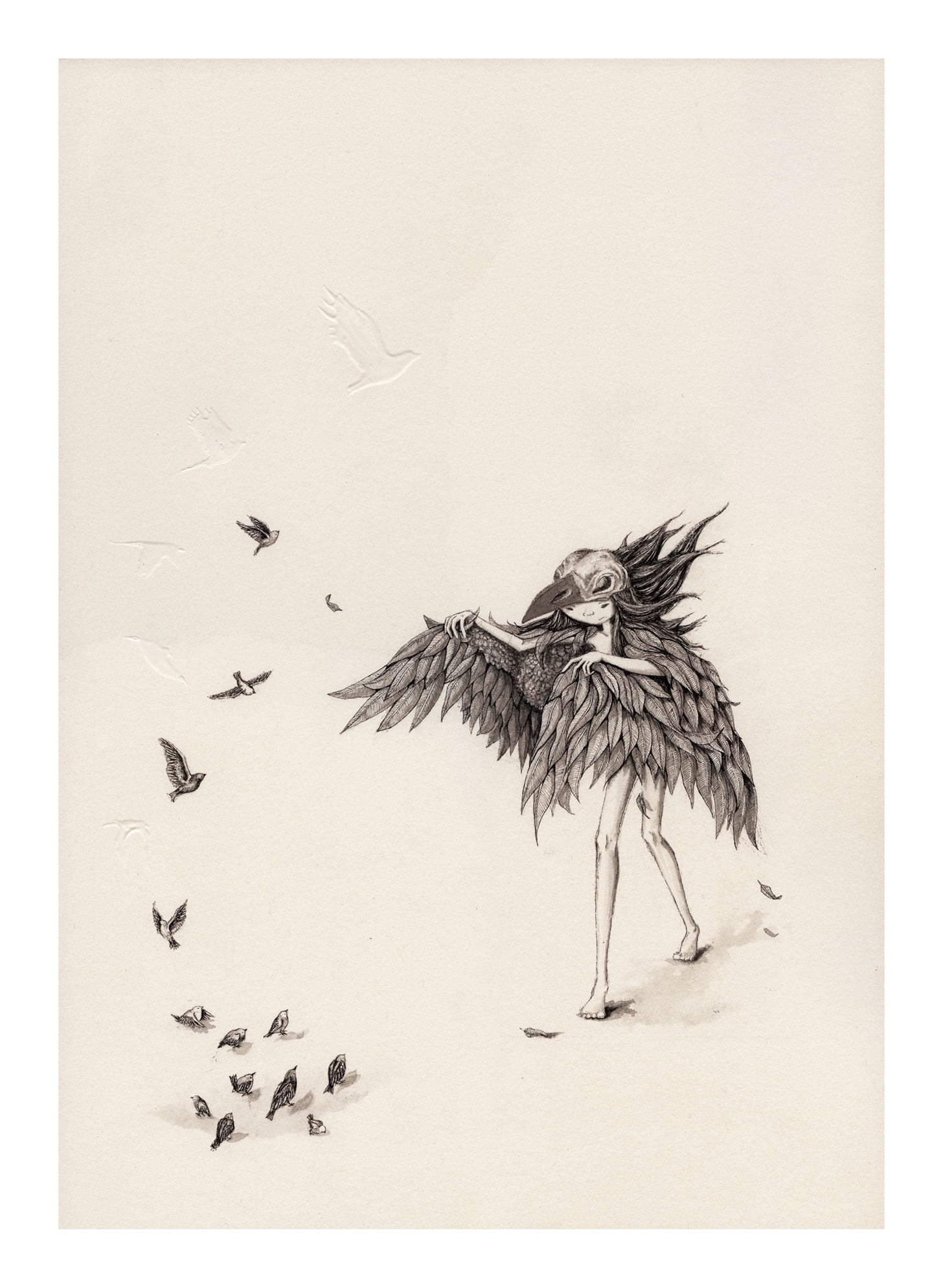