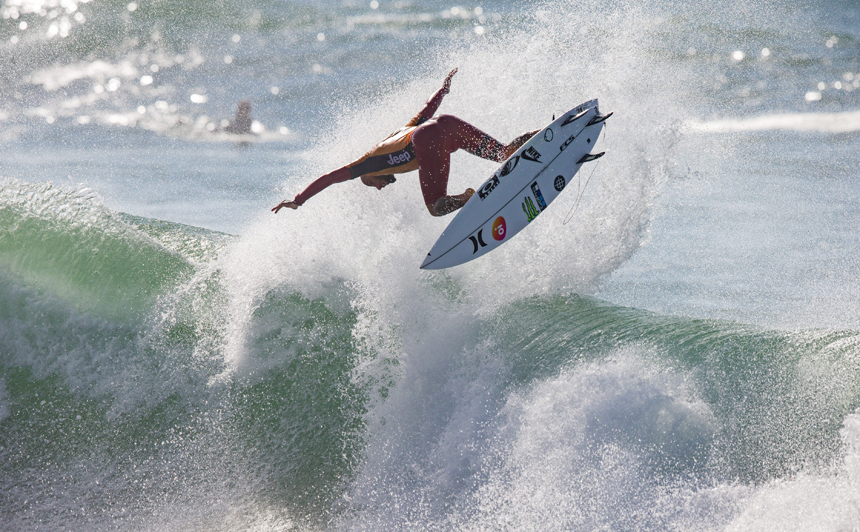 The Quiksilver Pro France, Stop No. 9 on the World Surf League (WSL) Championship Tour (CT), resumed today in pumping six-foot surf at Culs Nus to complete the second and third rounds of the men’s event.

Current Jeep Frontrunner Filipe Toledo took on lethal wildcard Ryan Callinan in firing lefts at high tide this afternoon. The Brasilian seemed to have everything under control, even scoring the event’s best ride, an incredible 9.00 (out of a possible 10), and backing it up with 7.60 to put his opponent in a combination situation.

But, Callinan never looked defeated and fought back to take an incredible come-from-behind victory with his last two efforts of a 7.93 and an 8.87. The Australian, who received a replacement wildcard for being the best non-CT surfer on the Qualifying Series, played spoiler in the World Title race today by eliminating Toledo, giving Gabriel Medina a golden opportunity to overtake his compatriot in the rankings.

“I was pretty lost in the moment, to be honest,” Callinan said. “I just built through the heat and the two waves that came to me just happened to be beautiful waves with no lumps. It’s amazing out there. I feel like I belong there now. When I was on tour, I had a lot of big heats like that were close but never seemed to go my way. It seems to be switching around in this event so it’s great!” 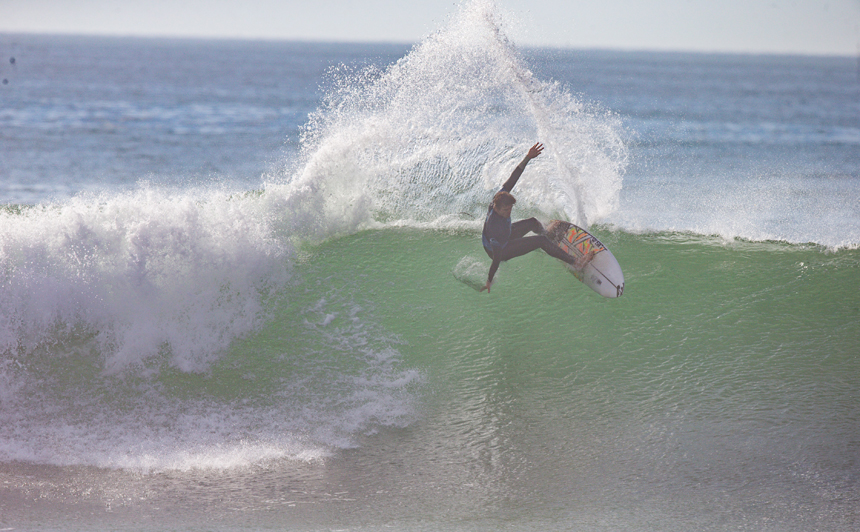 This early elimination (13th place) for Toledo is his second throwaway result this season and will put pressure on the current World No. 1 as his main opponent Medina is, on the other hand, building momentum into the back half of the season.

“It’s a tough loss but I have a lot of respect for Ryan (Callinan), he surfed really well,” Toledo said. “I’ve been on tour for six years but I still make rookie mistakes. That priority mistake cost me the heat and probably the yellow Jeep Jersey, but I’ll remain focused.”

A strong South wind came up and rendered conditions slightly more difficult for Medina and Wiggolly Dantas in the following heat. Despite the obstacles, the World No. 2 seized every opportunity he could get and managed to take an important win into Round 4.

“It was really hard out there and I was kind of lost,” Medina said. “I watched everyone getting barreled and doing big airs all day and it looked really fun, but we weren’t so lucky in that heat. It feels amazing to see all the support here, especially when you’re not home. Filipe (Toledo) out is obviously good for my own campaign, but as I’ve already said, I’m really focused on myself and I want to do good here.” 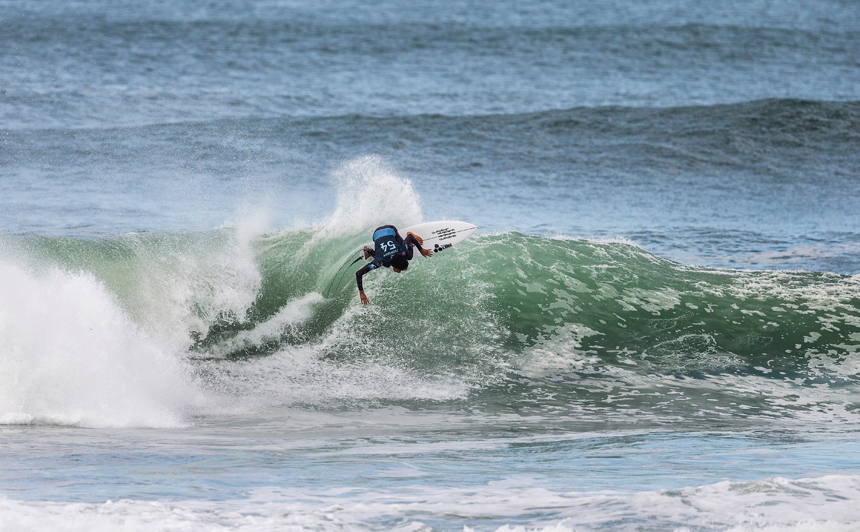 The opening matchup of Round 3 between Matt Wilkinson and Italo Ferreira was an amazing battle of backhand powerhouses on the clean rights at Culs Nus. An opening exchange on two extremely similar waves went Wilkinson’s way by the slimmest of margins. The heat continued with surfers trying to back up their main score, but it all eventually came down to a last-second effort from both athletes. Once again judges had to take their magnifying glasses out to dissect the subtle differences in each ride. When the dust settled, it was Wilkinson who came out on top by 0.06 to upset World No. 4 Ferreira and move on to Round 4.

“Waves are kind of tricky so you have to be patient,” Wilkinson said. “I was stoked to get that last wave and I heard people screaming as I was standing up, and I thought Italo probably did something crazy, I was just hoping it wasn’t a giant score. I’m here to re-gain my mojo and I’d love to find myself in a semi or a final, on the podium and lifting up a trophy would be nice for sure.”

Heat 2 and 3 witnessed top seeds Conner Coffin and Jordy Smith take short victories over recent Red Bull Airborne winner Yago Dora and Ian Gouveia respectively. Willian Cardoso survived a tight battle with Connor O’Leary and jumped back in the lead with seconds on the clock for his spot into Round 4.

Former Quiksilver Pro France winner Adrian Buchan and 2015 WSL Champion Adriano de Souza went head-to-head in Heat 5, but the Brasilian cut the battle short with one of the event’s best waves, an incredible 8.70 (out of a possible 10). De Souza started on a double-overhead bomb with a clean wall and locked in a combination of fully committed gauges under the lip.

“I’ve had a good run so far and I want to keep the same rhythm until the end,” De Souza said. “I’m stoked to take this one over Ace (Buchan) cause he’s in front of me on the rankings so we’re fighting for points.” 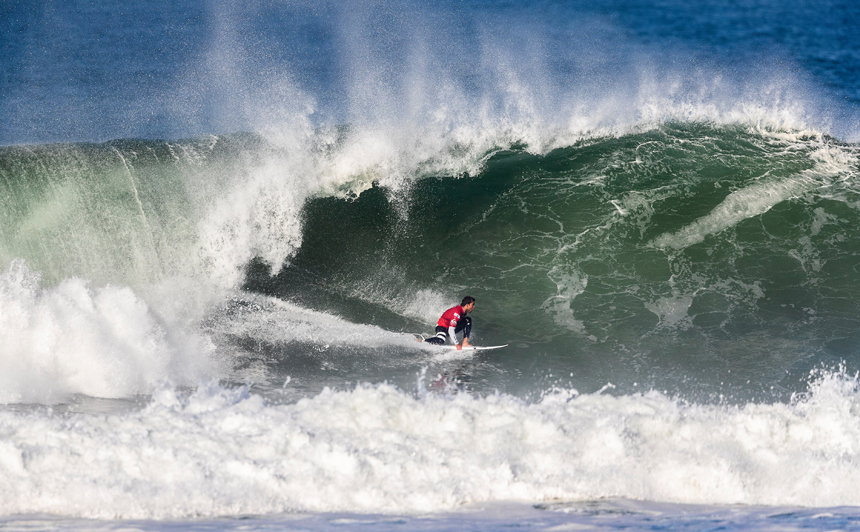 The men’s second day of action witnessed the early elimination of Frenchmen Jeremy Flores and Michel Bourez in Round 2. On the men’s side, sophomore Joan Duru will be the sole representative of the home nation when the event resumes, facing World No. 3Julian Wilson in Heat 12 of the third round.

The women’s Roxy Pro heat draw is now set for Round 3. Round 3 will mark the first elimination heats for World No. 1 Stephanie Gilmore and World No. 2 Lakey Peterson. With a World Title on the line in France, both surfers need to dodge early exits. For Gilmore, losing before the Semifinals means she will be unable to clinch the World Title early. For Peterson, she will need to finish ahead of Gilmore in order to push the race to the last stop on the WSL Tour, the Beachwaver Maui Pro.

The World Title scenarios are as follows:
*- Gilmore is the only surfer who can clinch the title at the Roxy Pro France

Surfline, the forecast partner of the WSL, is calling for:

New, mid-period and medium-size NW swell will build through the day on Tuesday and hold Wednesday before trending down Thursday. Wind looks favourable all day Tuesday and for the first half of Wednesday, with less favourable conditions Wednesday afternoon and Thursday.  Another mid-size WNW swell is possible Friday, with larger surf over the weekend