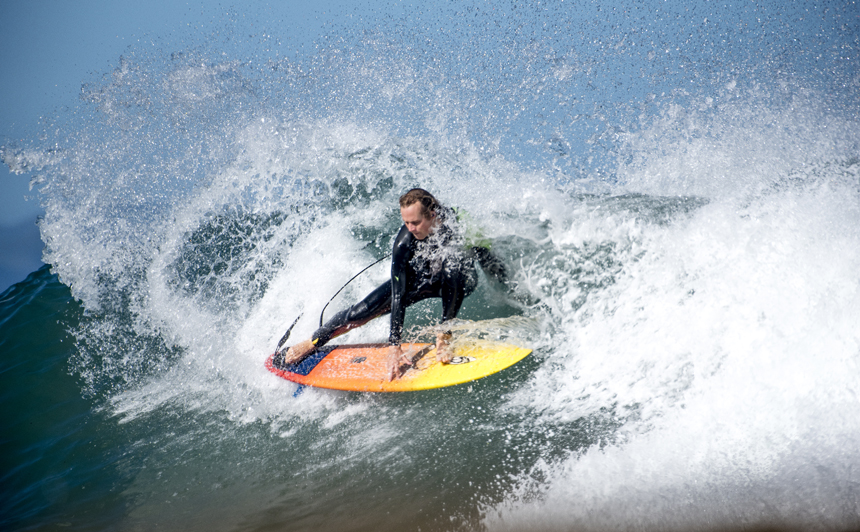 Born in George and raised on the sand at Victoria Bay, Forrest Hair is a Garden Route local to the core. It was inevitable that he’d tail his frothing dad, Stephen, over the bricks one day to make one of the gnarliest rock jumps in the country. You’d think he’d follow in his dad’s wake and smash it in competitions too, but “I freaked myself out before heats,” says the chilled ripper. Instead, Forrest likes to work with his hands and is an accomplished carpenter, not to mention that he built his own home as well. Otherwise, he surfs whenever there are waves in the bay, which is often at one of the most consistent spots in the country.

Number of boards snapped: Not too many to be honest. The only one that hurt was breaking a brand new board on its first surf.

Been there, done that: Bali, but wasn’t stoked on the crowds. There are places I’d like to go, but the home stretch has some world-class empty waves, so it’s a good place to be.

Most underrated: Shaun Joubert. No doubt that he’s still one of SA’s best.

Groovy music: I love my drum and bass. Some bands I’ve been listening to lately are Sticky Fingers, Two Door Cinema Club, Miike Snow and Jamiroquai.

1) Left your wax face-up on a sunny day: Only in a boardbag.

2) Missed good waves to visit a girl: I can’t say I haven’t.

3) Lied why you weren’t out during a swell: Nah, I haven’t. In my area it’s impossible to be on every swell.

4) Missed epic surf because of a hangover: Nooit, surfing is way more important.

5) Peed in a borrowed wetsuit: I can’t remember borrowing a suit, but I wouldn’t get out the water if I needed to pee.

Worst grom abuse suffered: I never really got abused. The okes were probably too scared of my ballie to bully me.

Last time you laughed at a mate: Shame, it was a bummer for him. A mate of mine got a brand new 44 model from G-Force and went up to J-Bay for a swell. It was firing and he took the board out of the car and put it on the ground. Then he turned around for two seconds and somebody reversed over it.