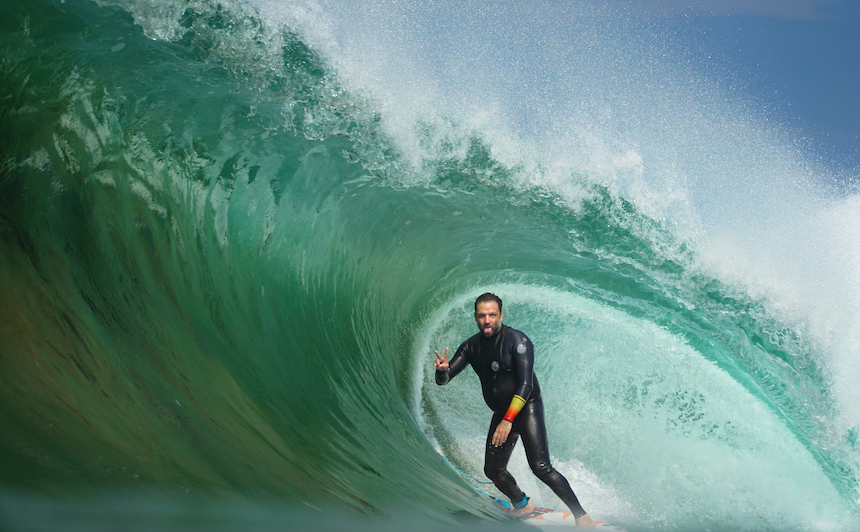 Dylan Stewart grew up on what he calls, “the best closeout on the KwaZulu- Natal north coast.” Umdloti, his local, is that sweet, salty town, just 30kms north of Durban city, named after a species of wild tobacco. But we all know it better for the short, powerful waves it packs in its pipe. And Dylan knows just how to smoke it.

A sharp, raw, and confident surfer, Dylan is at his best soaring teeth first through the green veins of the life source. He’s been at it for a while. As a grom, he collected heat wins across the country as one of SA’s top juniors. Now
in his thirties, Dylan works as an Operations Manager, is about to move to Germany, and can be found most days trying to squeeze the last drops of juice out of every dawny and arvo session.

Peace! Middle-age hasn’t mellowed Dylan out too much.

Signature move: I like to put it on the rail.

Been there, done that: Ments, Bali, Aus, Mauritius, Madagascar, to name a few.

Most underrated: There are too many underrated surfers in this country to name.

1)Left your wax face-up on a sunny day: Yes, stupid things we did when we were young.

2)Missed good waves for a dumb reason: Staying up too late when I should have slept!

3)Peed in a borrowed wetsuit: Nope, I don’t borrow wetsuits.

4)Claimed a lame barrel: Not lately, but maybe when I was a grom.

Worst grom abuse suffered: As a grom we got it, from being tied naked to a pole watching the guys getting waves, to being beaten for opening our mouths. It was all part of growing up. We dished it just as bad to the next generation. Last time you got ripped off: I stopped surfing comps a while back, but my cab did get ripped off at North Beach parking lot a little while ago.

Best thing about living in SA: The selection of waves we have on offer and the beer is relatively cheap.

The worst thing about living in SA: The filthiness of our beaches and streets, load shedding, water cuts and unfortunately the crime.

Last time you laughed at a mate: I would have to say at G’mans house with Andy. Not telling why.