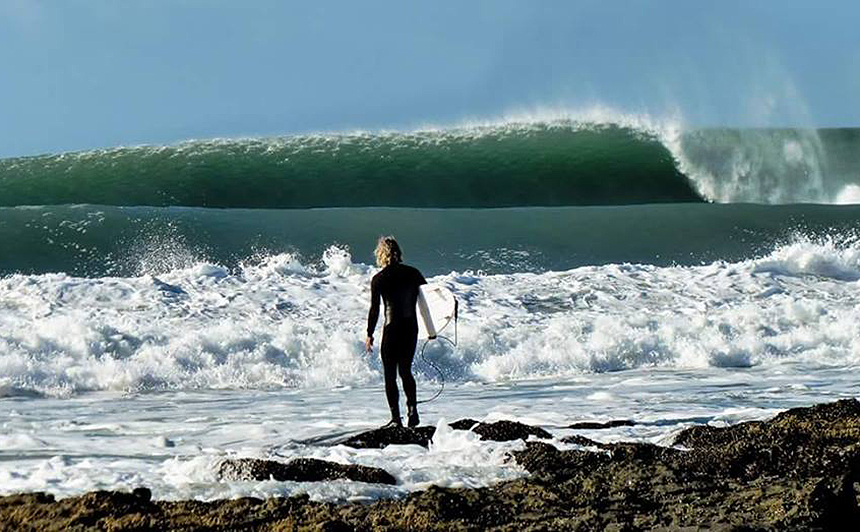 South Africa’s laden with a brilliant array of righthand pointbreaks. We have more righthand pointbreaks in South Africa than China has factories pumping out T-shirts. Okay, that’s an exaggeration, but there are a butt load of pointbreaks on every corner of this beautiful country except the Wes Kus. Sorry Dutchie. Just go to the South Coast and you’ll encounter pointbreak after pointbreak after pointbreak. The only issue is trying to find a homie to surf with. Anyway, with all these pointbreaks running wild, there are also a plethora of extremely difficult rock jumps. Rock jumps that would make any kook poo in his pants. Or us. Here are our favourite worst rock jumps. Aka ‘Kookslams heaven’.

The other day I was paddling out at Supertubes. It wasn’t particularly big, about medium sized and there in front of me stood two British hopefuls. Like two deers in the headlights, they’d been standing there for hours waiting for a window. Clueless. I’d surfed with them two days before at one foot Tubes and let’s just say, they weren’t the most adept surfers on planet Earth. Eventually they pulled the trigger and dove over a foamy. The water drew back, exposing reef. Suddenly fins were dragging and they were paddling on dry land. The next wave washed over them and proceeded to drive them down the point. A sight to behold indeed.

To be honest once Supers gets over 6 feet and the swell swings South, the paddle out is going to be hairy. Only the most seasoned of Supertubes veterans knows how to handle the situation. Timing is of importance. And once you pull the trigger, be prepared to put on the burners. Like a rocket taking off for outer space, you need to kick those spindly legs of yours and only stop once you’re out back, safe and sound. Trust me there have been too many incidences where someone has been dragged all the way from the keyhole to Lower Point, getting absolutely blitzed all the way! Taking wave after wave on the head, walking round and doing it all again. You don’t wanna be that guy. So get your timing right and kick those legs!

Ahhh Victoria Bay, what a wonderful slice of paradise. Children frolicking in the soft sand, mense hanging on the pier, some homies enjoying the fresh cool waters in the tidal pool. But don’t you dare take that paddle out lightly, especially when the waves top 6 foot. Then Vic Bay turns into a paddle out from hell. Unless you paddle from the beachie. But no self-respecting surfer wants to do that.

Vic Bay has a weird little channel that lies parallel to the breaking wave. But what makes the situation particularly challenging, is that from the channel, the rocks prevent you from seeing the sets. You’re basically riding blind baby. You basically have to employ a friend to stand on the rocks and spot for you. And you’d better hope your mate isn’t sadistic or else he’ll send you into the lions den with 10 foot sets rolling onto dry rocks. 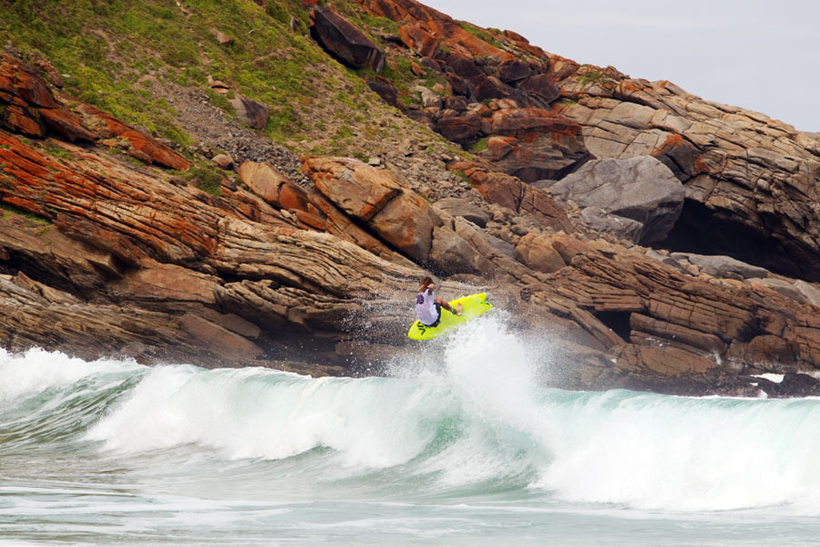 Just wait until the surf rises to four feet and you try paddle out. Then we’ll see who’ll be busting airs in the shorey. Image: Greg Ewing

Now Mossel Bay ain’t the gnarliest paddle out. In fact if you know what you’re doing, you can get out there pretty easy. But just you dare take that paddle lightly when the waves are thundering and the tide is high. Oh man. There are many things we’d rather do than attempt that. A happy surf turns into a extremely volatile situation in the blink of an eye. It’s kind of like Bali. You go to Bali in search of paradise and end up in hell. One minute you’re enjoying beautiful blue barrels at Temples next you over the falls get smashed on the reef and end up in hospital for the rest of your trip.

There’s one little spot you can paddle in at Inner Pool where the waves roll in with force. There are boulders to avoid and it’s just a nightmare. What makes it worse is there’s a restaurant full of people enjoying a seafood platter, watching you scramble for dear life. An amusing situation no doubt. 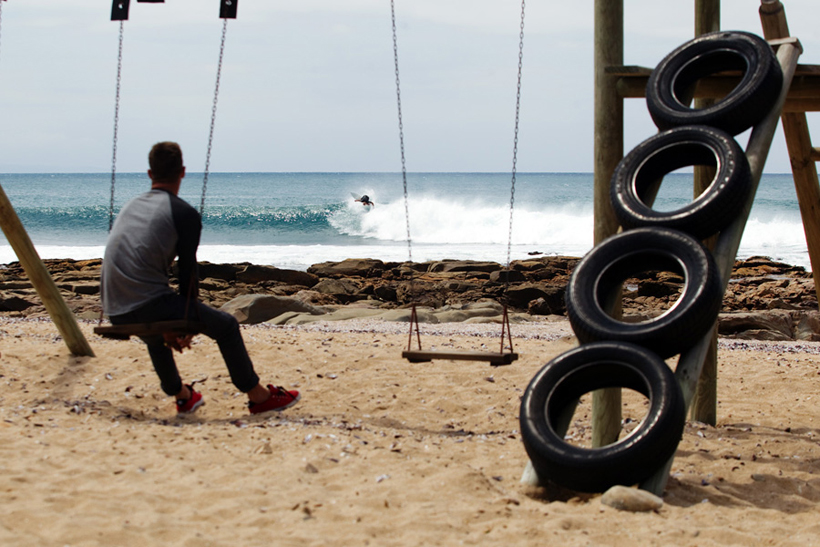 Ja, it’s lekker on the swings, just wait till you try paddle in. Image: Greg Ewing

The last time we ventured to ‘That wave we all pretend not to know close to Mossel Bay’ the car park was bursting at the seams with cars sporting CA number plates all the way to George. Lining up, waiting for a wave, like they’re entering the Cape Point Nature Reserve. At low tide, the rock jump at ‘That wave’ is pretty chilled, but just you wait until the tide rises a touch. Man, oh man does that rock jump turn into a full blown nightmare. I once witnessed a, let’s just say lesser experienced surfer, heinously mistime the paddle out and consequently get slammed against the wall of the tidal pool. More than once. My heart ached for him.

The rocks are so jagged they’re like swords sticking from the earth. It’s like every rock is trying to stab you. They’re at an absolutely horrible angle. The worst angle to stand on. It feels like the creator DID NOT want you to jump off these rocks into the ocean. Just looking at those rocks gives me an instant headache. I suppose the locals aren’t complaining.

The South Coast has a thousand different point breaks. Every little nook and cranny has a wave worth viewing on its day. And each wave can be dangerous on its day. Among the noteworthy rock jumps, St Mikes deserves an honorary mention. You gotta time your run down and hop off the rock with the hope that no sets are approaching. Straight into the lions den.

But one of the most confusing rock jumps must be the Spot on the South Coast. Everyone has a different approach to getting out there, one mate reckons here’s better, another reckons there, and you always know that one guy that just paddles out anywhere. No matter where you jump from though, you’re almost guaranteed a good old walloping. Paddling out at the Spot is much like gambling, it doesn’t really matter how you role the dice, your fate is decided. Even if you make the rock jump, you might not make it back to the beach without the tyres being stolen off your car. Gnarly.