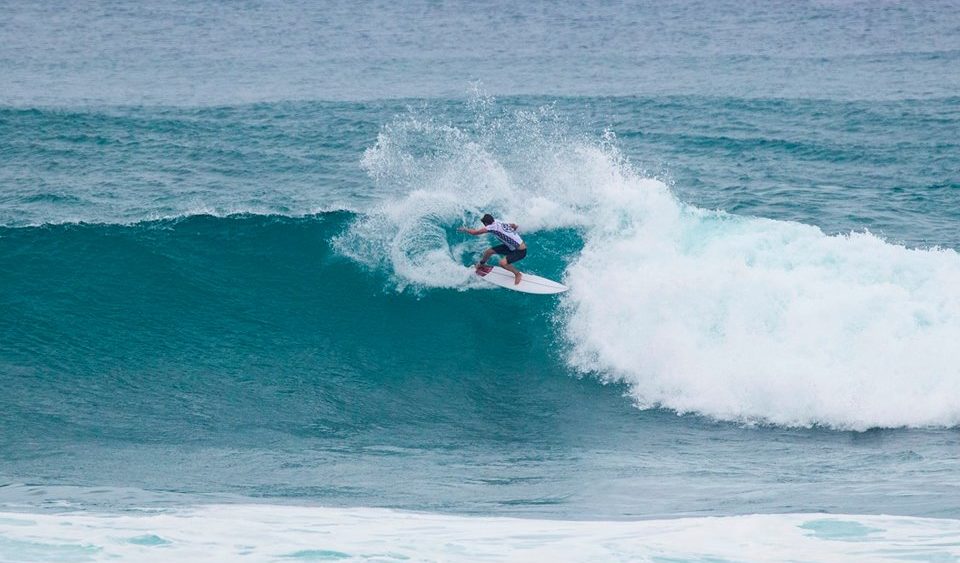 Opening day of the HIC Pro saw first-class performances alongside surprising upsets as Sunset Beach steamrolled the lineup with powerful wave faces up to 15ft. to challenge athletes’ stamina and commitment. The Men’s QS 3,000, the HIC Pro is the official local qualifier into the Vans Triple Crown of Surfing, making this one of the heaviest events in the WSL Hawaii/Tahiti Nui region. Both local and international athletes were highlighted today in their hunt for points, qualification and glory at the opening event of the North Shore’s competitive surf season.

Maui’s Cody Young matched the NNW swell energy with classic power surfing and earned a 9.50 in Round 2 for the day’s best barrel ride. Earlier in the competition, two-time HIC Pro winners (2015 and 2005) Ian Walsh and Mason Ho (2016 and 2013) missed advancement in shocking Round 1 eliminations, while former CT competitor Wiggolly Dantas also suffered an early loss. 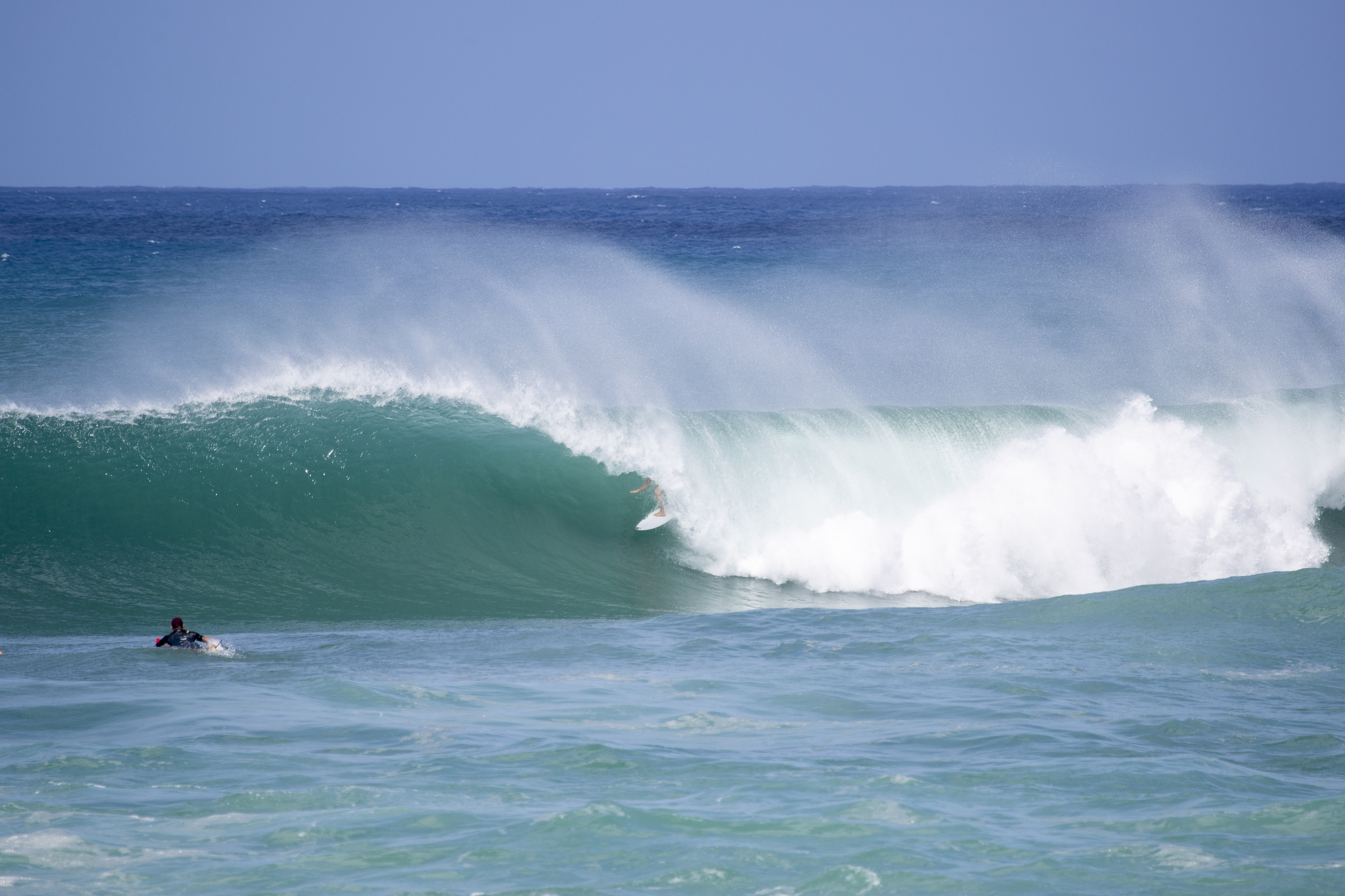 Cody Young of Hawaii advances to round three after placing first in ​Heat​ ​1​ ​of​ ​Round​ ​two ​at​ ​Sunset Beach, Oahu, Hawaii, USA

Young, 19, showed incredible control as he dropped in behind the peak of a solid 10ft. cavern and navigated the barrel to emerge cleanly, then followed up with two flawless turns to stamp out an excellent score from judges. He backed this with a 7.33 to combo the field and took home the day’s highest single wave score and combined heat total – a 16.83 out of a possible 20 – to secure a spot in Round 3.

“I love the challenge that Sunset brings, with so much water moving you’re paddling so hard and definitely have to have a lot of endurance out there,” said Young post-heat. “A lot of us train all summer for the winter season so this is when it comes into play.”

Young has competed at various QS events this year but is happy to return to the islands where he feels his power surfing is best displayed. “It feels really good to be back here, competing in the HIC Pro and the Triple Crown,” Young continued. “This is what I feel is my strong suit. I did a lot of events this year but didn’t do so well on the QS. I just want to get my points up so I can do the 10,000’s next year and really give it a shot on trying to qualify for the CT. But this is where the Hawaiians usually get a big chunk of their points so I’m hoping I can do the same.”

Big wave standout, former winner and multi-finalist at Sunset Beach, Jack Robinson showed off his comfort level in the challenging surf after earning the second-highest single wave score of the day, an 8.50, for a beautiful barrel across the outside section followed by a powerful forehand carving top turn. Robinson returns to the North Shore each year to take advantage of the perfect surf and compete in the VTCS. 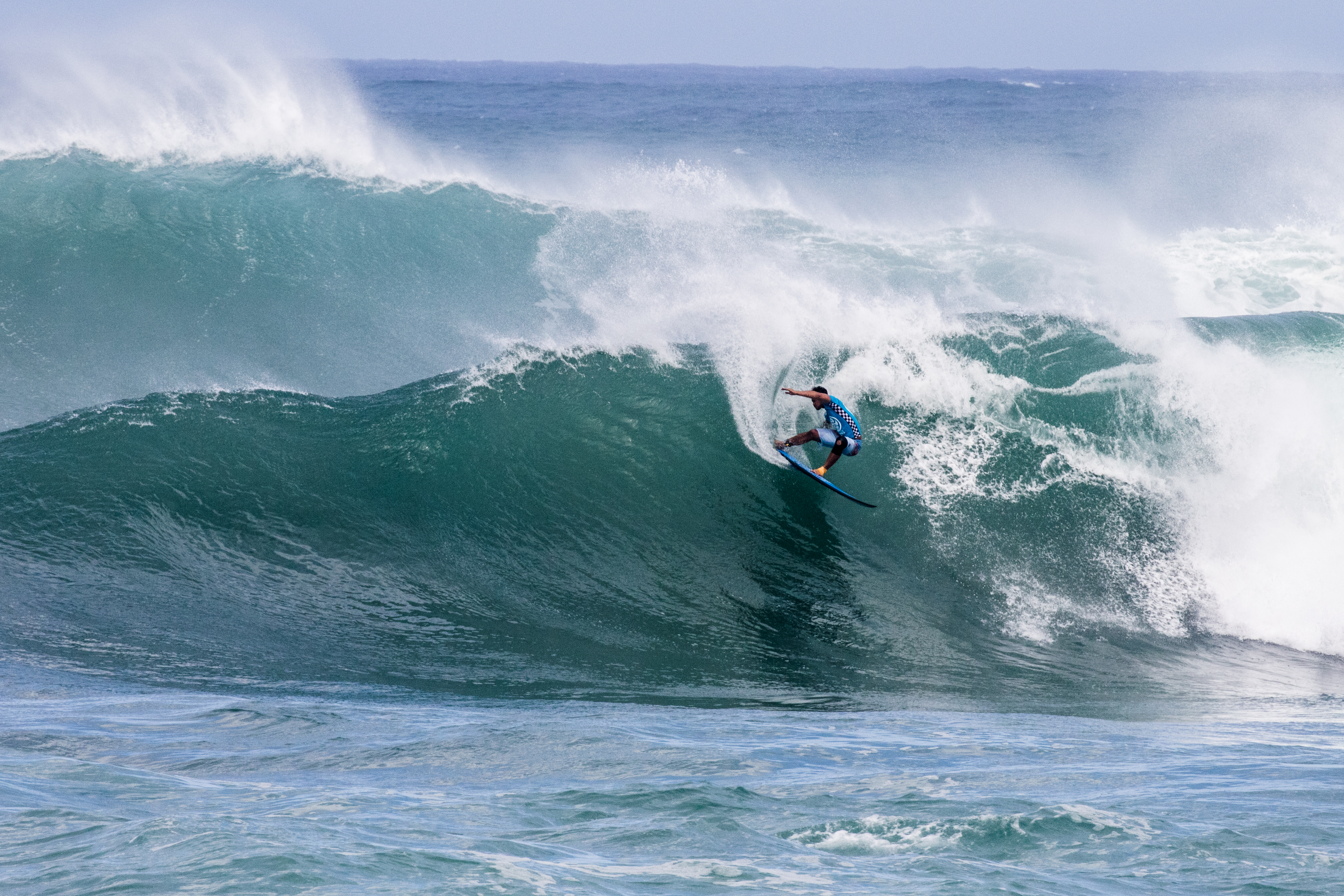 “I’m stoked to be back in Hawaii and can’t believe we’re here already, it came around quick,” Robinson said. “I plan to do the whole Triple Crown, just get waves, surf good and do what I do.”

The top Tahitian in the 112-man field, O’Neill Massin, is in the hunt for the WSL Hawaii/Tahiti Nui Regional QS title and got off to a great start with an 8.10 in Round 1. Currently rated #4 on the regional rankings, Massin earned fifth place at the Sunset Pro Open earlier this year and again at the Papara Pro Open Tahiti in March.

“That (would) mean a lot,” said Massin about earning the Regional QS Title. “A lot of training, a lot of sacrifice, hopefully I can get this one and bring it back to Tahiti.”

One of the youngest competitors in the field, Wyatt McHale, 17, surfed his way successfully through Rounds 1 and 2 with patience, power and good positioning. He built momentum in Round Two Heat 10 with a 7.17 and 6.70 and proved he has what it takes to compete against the region’s best.

“I was pretty nervous because I really want to do well in these events at home, I surf here all the time so I just wanted to make sure I could at least make my first round and kind of get those nerves out,” said McHale. “The Triple Crown is a really big deal, this is the first year I’ll be in both Haleiwa and Sunset so it’s a huge deal, I’m really psyched to be a part of it. I can’t wait and this is a great event to kick it off.”

The teen has groomed his skills at the premier breaks on the North Shore including Sunset, Rockies, Pipeline/Backdoor and Off the Wall. This season sees him transition from junior status into a true threat at the next level.

World-renowned ocean athlete from Maui, Kai Lenny, took control of Round One Heat 6 after advancing through in first with a 4.80 and 4.00, and although he is known as one of the most well-rounded and acclaimed watermen in the world, his scores – and the downfall of top competitors – demonstrated the unpredictable energy of Sunset Beach.

“Sunset Beach is a well-known spot for keeping you humbled,” said Lenny. “I’ve been watching heats all morning prior to mine and I could tell how tricky it was because some of the best guys were falling off and not making it through heats. 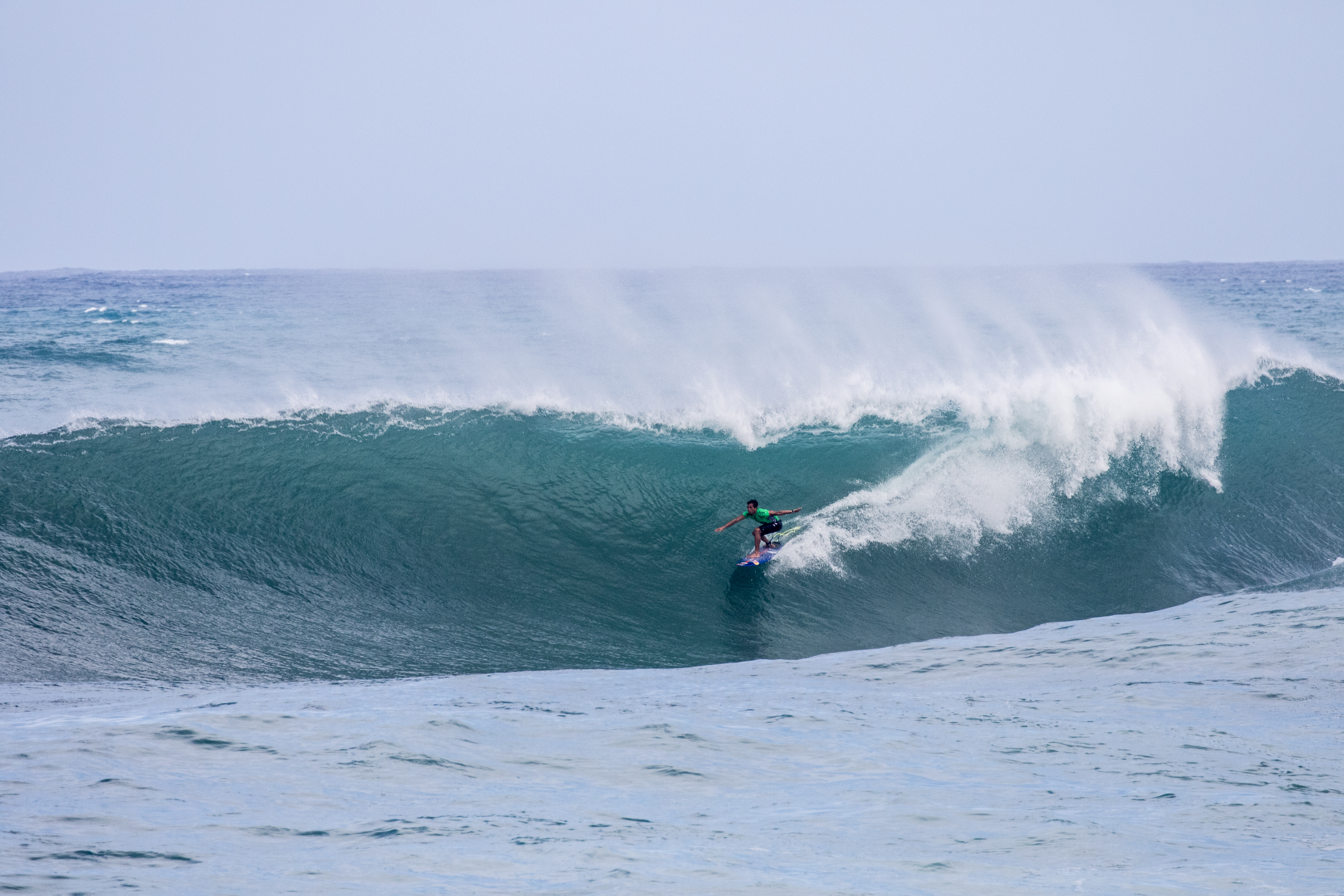 “The North Shore is the proving grounds and every time I come here I do feel a personal pressure to perform amongst my peers, but also on this coastline that is known for some of the most powerful, perfect and gnarly waves in the world. The energy here can be pretty powerful just with the amount of energy that comes off the ocean and so we’re getting back in the rhythm, it really does feel like winter when you’re back on the North Shore. I would say this is the official start to winter even though it still may be fall, but it does feel like that since this is the changing of the seasons, at least here in Hawaii.”

Slade Prestwich won his Round of 96 heat in the QS3,000 HIC Pro at Sunset Beach in Hawaii yesterday to join Jordy Smith, Matt McGillivray and Beyrick de Vries who are seeded directly into R64

When the contest resumes, David van Zyl and Dylan Lightfoot will be up in the the first heat (R96, H12) with Benji Brand in H13 and Adin Masencamp in H16.

The swell is forecast to slowly decrease tonight but still provide promising 6-8ft. faces for contestable surf tomorrow. Contest organizers will return in the morning to make a call by 7:30am HST. The HIC Pro will run on the three biggest and best days of surf within the holding window, October 27 – November 9, and ultimately crown an event winner, a WSL Hawaii/Tahiti Nui Regional QS Winner, and nine slots into the Vans Triple Crown of Surfing. Visit WorldSurfLeague.com, the WSL app, WSL Facebook page and VansTripleCrownOfSurfing.com to watch the event LIVE.

Results
Athletes listed in 1st through 4th, all surfers from Hawaii unless otherwise noted.