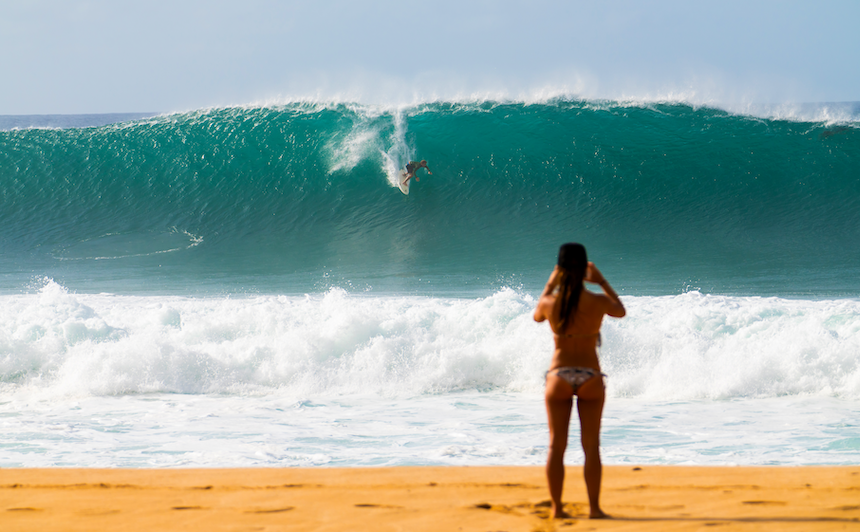 Nostalgia on ‘The Rock’

A few years back, South African representation in Hawaii all but dried up. Beyond the big three: Jordy, Twiggy and Pipe transplant Benji Brand, there was no one else to hoist the rainbow y-front high! Today, as our surfing fortunes rebound, The Rock is once again a crucial step in the professional surfer’s path.

Still relevant, still brutal, still the ultimate proving ground for a career in the world of surfing. Here are a few key moments for team Saffa from last years’ winter season. 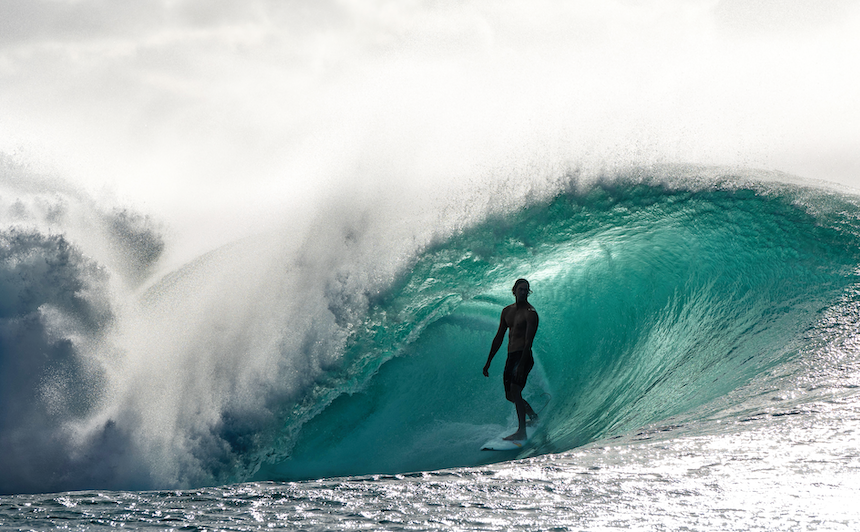 Jordy Smith – If the group of South Africans that show up in Hawaii each year were compared to a pack of wolves, Jordy Smith would be the alpha. Leader of the pack. The big dog. Jordy eases his way to excellent results on the North Shore. A quarterfinal at the Hawaiian Pro and a Semifinal at Sunset Beach in 2018, all in a day’s work for Jords.

Mr. Smith dropped his wallet in Hawaii last year and purchased some prime real estate on the North Shore, which is funny because it correlated quite nicely with his best result at Pipeline ever; a third place. When asked by Potts what it would take to surf Pipe better, Jordy simply said, “time.” Now let that be a lesson to you all. Come on Jordy, have at it! 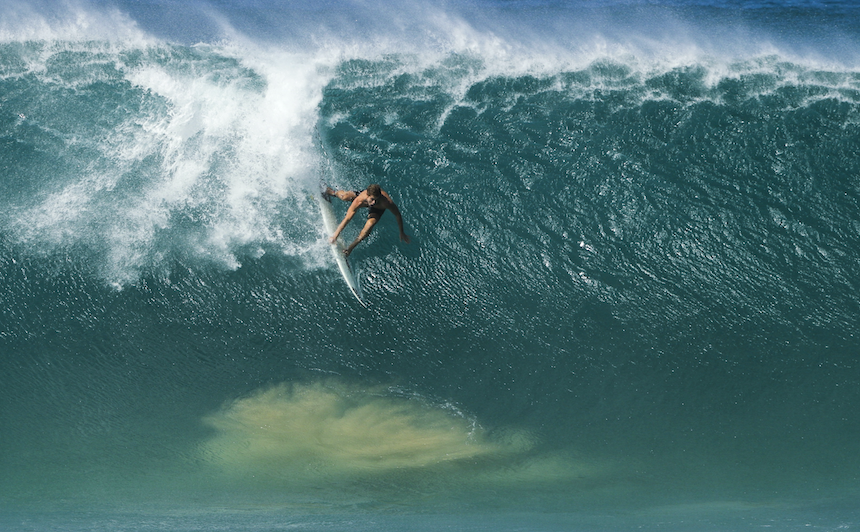 DVZ – If there’s one man who enjoys wide barrels and big open faces, it’s DVZ. Davey’s a happy- go-lucky kind of guy, he’s always smiling, but that smile seems to get wider as the waves get heavier. In 2017 Davey enjoyed his rookie year competing in the Triple Crown. He couldn’t afford boards, so he had to “borrow” one of Beyrick’s stashed under the McNamara’s house – unbeknown to Beyrick at the time.

It was a yellowed old Wade Tokoro 6’6, but Davey surfed that thing like a hot blade through butter. Happily knifing dangerous waves like this Pipe drop, is fast becoming his thing. “It’s so rad to go over there and test yourself in those waves… and it’s really important!” said Davey.

This year Davey took out the Vans Pro, the first international to ever do so.  He’s also through to Round 4 of the Hawaiian Pro, fingers crossed the hot streak continues and the lad backs into two big placings on the North Shore. 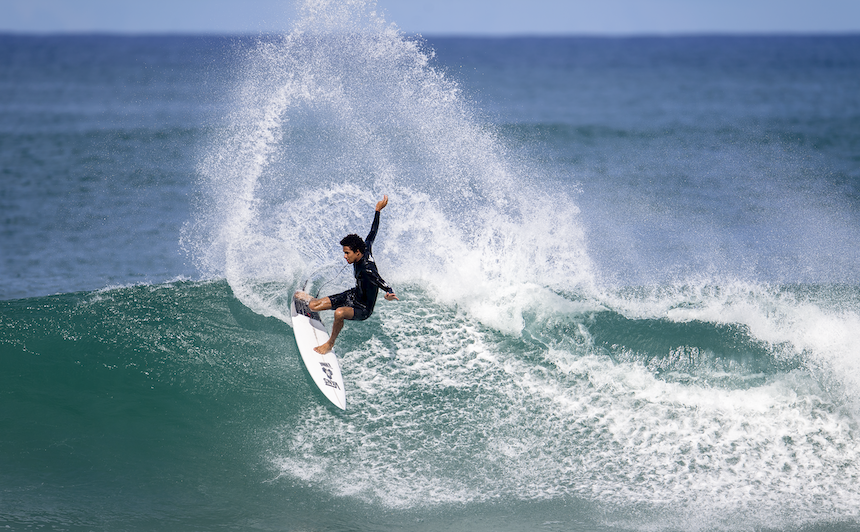 MFeb – Wouldn’t it be wonderful to have an innate quality that everybody adores? Something intangible and unique like Mikey Feb’s style. It’s not like he tries to be stylish, he simply is. Mikey is quickly being recognized as one of the most original surfers on planet Earth today and with a wonderful deal with VANS, things have never looked better for the tall, dark and handsome South African. 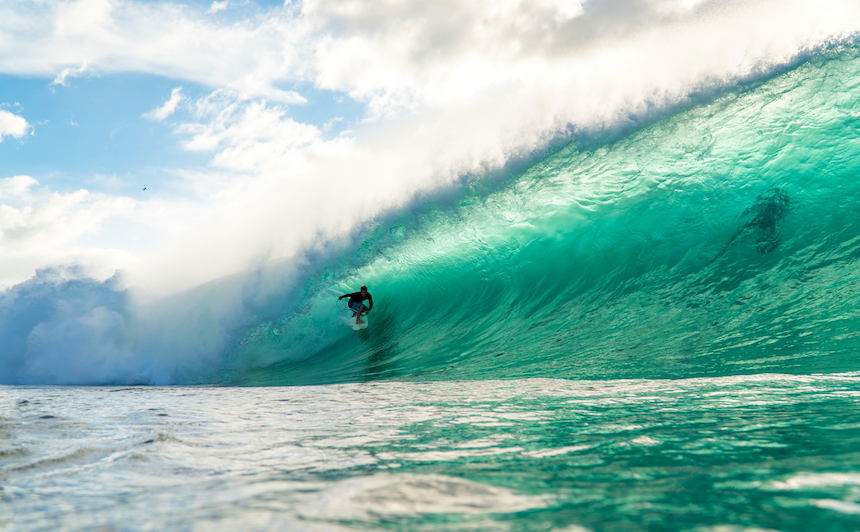 Benji Brand – Whenever you watch the Pipe Trials, most expect a guy like Jamie O’Brien or Koa Rothman to emerge victorious. You know, someone with a Youtube channel and thousands of subscribers. Jamie O’Brien surfs Pipeline better on an inflatable couch than most locals do on carefully crafted Pyzel freshies. But instead of JOB taking out the Pipe trials, we have Benji Brand, who has overcome the gnarliest Pipe locals two years in a row to make it into the main event. Benji’s a bar fridge sized man, with a heart the size of a double door walk-in industrial catering company fridge. There’s a new Pipe specialist in town and he grew up in Kommetjie, his name is Benji Brand… and even though there’s a little Hawaiian flag next to his name these days, the Skom doesn’t rinse out so easy. 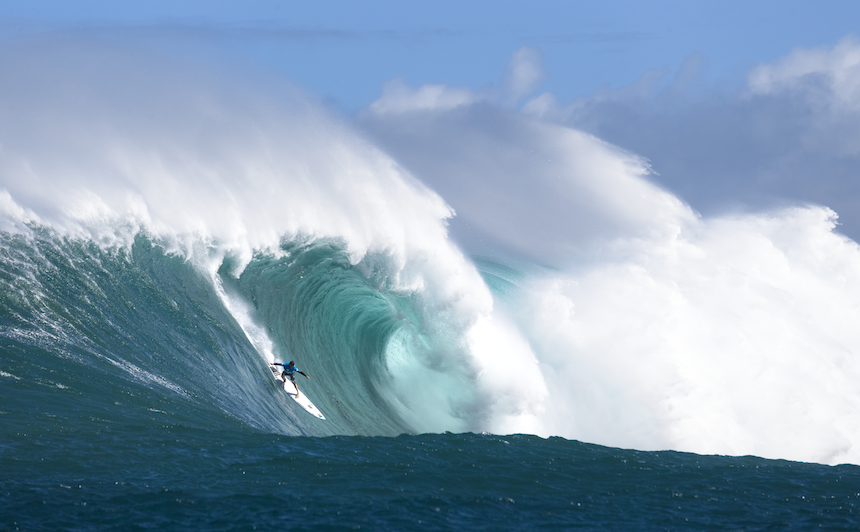 Twiggy – “Time was moving fast and we were way into the heat. I had looked at a few waves and paddled hard trying to catch them but when I stared over the edge, they seemed unmakeable. Too big, too steep, too much wind, so I had pulled back each time. The doubt was growing stronger. Am I capable? Is this possible?

Then as I come over the top of a massive wave, I see it, an even bigger one, but with a little more north, a double up for sure, but it looks more doable. Head down, paddle hard, no room for hesitation, quickly get the 10’6 up to speed and the nose angled just right. As I feel the wave pick up the tail I take four more of the strongest strokes of my life… I’m in and time stands still.

Delay the take off a split second, then jump and drive over the front foot, get that fucking rail in and make sure it stays in. The acceleration is like nothing I’ve felt before and my heart jumps into my throat. The bottom of the wave is turning into the lip and there’s a step half way down, coming at me fast. If the rail comes out or the board turns flat, you are dead, is my only thought.

I use the face of the wave to steady myself and wait for the back fin to catch. I look up and study my fate… Can I make it under the lip? No, yes, no, try… I stay as low and as far back as possible and drive on that inside rail as though my life depends on it. One bump, the rail releases again and the lip parts my hair as I squeeze under.

I’m a little low in the barrel but with a good angle up the face, so I let the wave draw me up before switching rails and aiming for the exit. It’s wide open, I got this. I feel the foam ball touch my fins and increase my speed, I still got this. I feel the spit, as strong as I’ve ever felt, pick me up and throw me 10 feet forward.

I land, still on my board, the spit starts to clear, I can make out a boat. I’ve made it! But a second foam ball from the barrel eating itself behind me, gets under the board and pushes me up. It sends me over my outside rail and onto my back, the spit clears completely and I can see again. I have fallen but I have made it far enough and my time continues to move forward.” 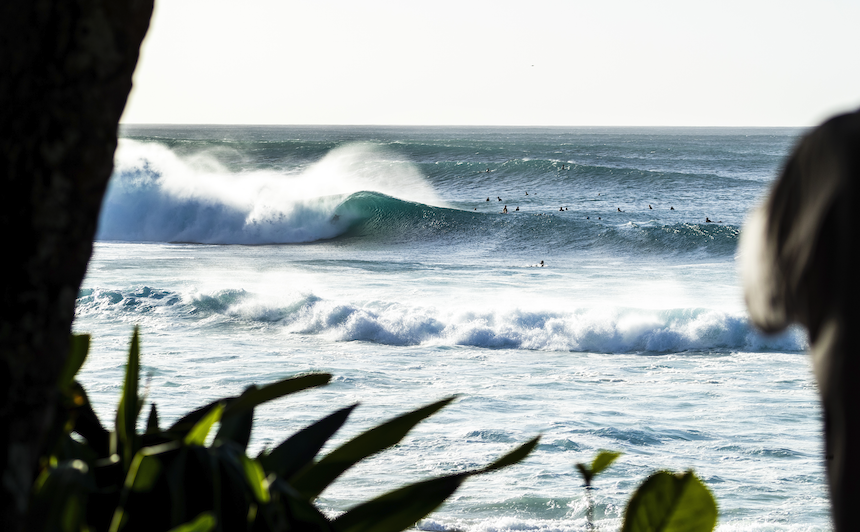 Adin Masencamp – His Hawaiian story is one for the ages. His parents took out a personal loan, bought him a bunch of boards, a return ticket to Hawaii, dropped him at Cape Town International and off he went. He rocked up in Hawaii with nowhere to stay and the pressure of paying back a loan via heat wins. Luckily the Jones family (Dan and Mikala) took him in. “That family did so much for me, I forged relationships with them that will last a lifetime,” said Adin. After staying with the Joneses, Adin moved to the Billabong House, which lies adjacent to Pipeline where he fell in love with the power of the Banzai, as you can see in the image to the left. “It’s my favourite wave, the feeling that you get when you make one… nothing else compares!” For his debut on The Rock, Adin’s turning heads and making a name. We can’t wait to see what he does in Hawaii when he returns at the end of this year. 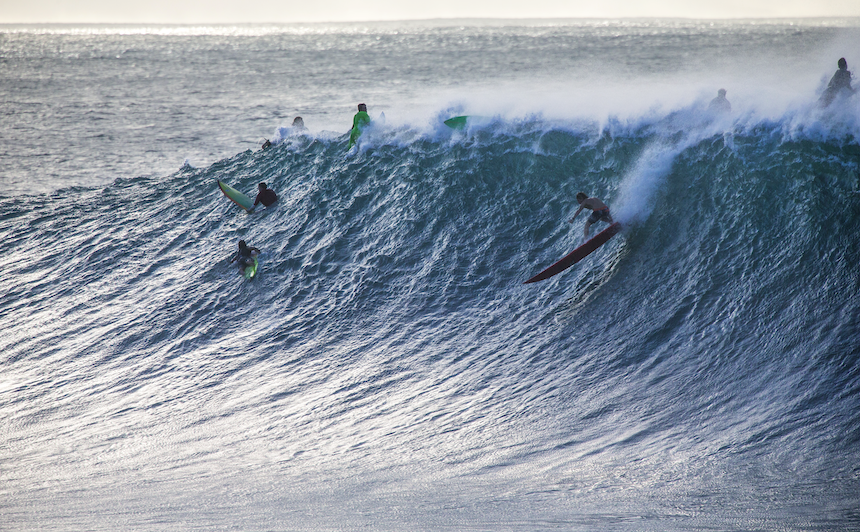 Beyrick de Vries – Beyrick loves Hawaii and Hawaii seems to share the sentiment for ol’ Berkie. It all turned on that 10 point drainer at Sunset a few years back. After his third-place finish at the HIC Pro, Sunset Beach he said: “When I’m out at Sunset, I have an extremely good feeling for the next wave that’s going to come. And I don’t have that feeling anywhere else in the world!” So the North Shore is a zone where the Umhlanga local thrives… and every few seasons, he manages to take a massive step forward. Last year was no different. In the spirit of embracing everything the surfing world offers, Beyrick found himself in unfamiliar territory, a borrowed 10 foot gun between his thighs, out at the back of Waimea Bay, just a few hours after Twiggy made that drop and they called off the Jaws event. Proper waves.

“The biggest wave of my life,” reckons Beyrick, who is not exactly known as a big wave guy, but has done a few sessions at Dungeons and Sunset in CT. “The hardest part for me was trying to work out how the line up works,” he laughs. “Like, is there a pecking order and a group of locals to respect and workaround for waves, or if you’re in the right spot and you’ve got the balls… you can just send it bru!” Beyrick eventually settled on the latter strategy and before the sunset pulled himself over the ledge and into this one. Check Berkie above, weighing his cojones with the manne at Waimea.