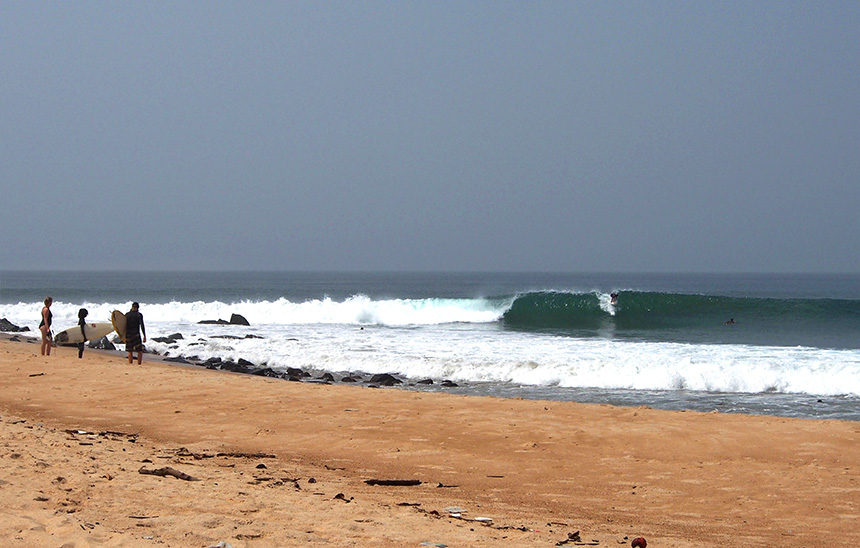 After calling it a day on the mundane, and escaping the rat race of modern living, Mark Sampson and his family got to work converting a 1978 Mercedes 911 into a carbon-neutral mobile home. A vehicle that would see them through 24 African countries operating off used vegetable oil. Whilst on their African adventure, they homeschooled their kids Zola and Ruby as they went on one hell of an adventure through Africa.

“There were three main reasons: we wanted to travel as sustainably as we could before we got too old to enjoy it; we wanted to show our kids Africa so they would grow up connected to the continent they were born in, not more familiar with imported culture; but mostly we wanted to ‘seize the day’ and hang out with them while they were still young enough to think we were cool. Under five there’s a risk they may die from malaria; over 12 there’s a risk you may drive each other up the wall. It’s a small gap – you gotta grab it,” adds Mark, a Cornishman who came to SA in ‘92 on a surfing vacation and never left

“The trip was a way to get Ruby and Zola away from thoughtless consumerism, peer pressure and the social media world which promotes destructive comparisons of themselves to others through fake Facebook lives.” Mark and his wife Sam wanted to teach them how to survive by using less, but experiencing more. 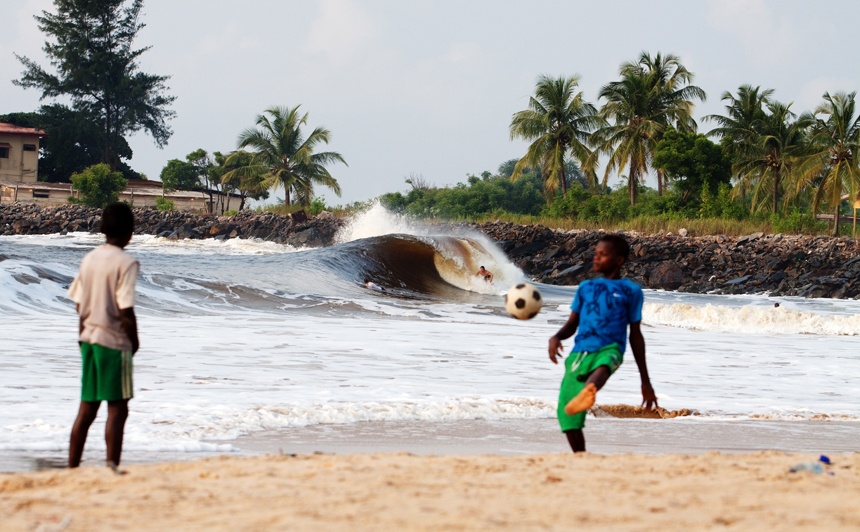 Whilst on their ‘Africa Clockwise’ trip, Mark and Zola took any chance possible to surf, “Travelling and surfing with my son, seeing him grow from a wobbly-kneed nine-year-old into a 14-year-old big wave charger has been an enormous gift. Watching him take off on a monster late drop a kilometer out to sea without another soul in sight is almost better than making that drop yourself!”

“In the Congo, we got blown out of spitting beach break barrels like Dunes; in Cameroon, we saw perfect volcanic reef waves reminiscent of Lanzarote; in Ghana, we surfed a perfect A-frame reef at four to eight-foot entirely alone for over two weeks. In Cote d’Ivoire, we both clocked up one minute long rides, and in The Gambia, we paddled nearly a kilometre out to sea to surf an outer reef which had definitely never been surfed before.”

Making this surfari even more ridiculous is the fact that Mark and Zola managed to surf hundreds of waves on a 6 board quiver, and no less than 30 leashes. It’s was only with the support of Mrs. Palmers, Reef Wetsuits, Island Tribe and Scarfini that they’ve never gone a begging. It’s good to see the SA surf industry backing such a righteous cause.

Now, Zola just might be the most well-traveled grom on the continent when it comes to getting pitted around Africa. So with this in mind, we thought we would sit down with the young lad and get an insider perspective on the journey of his life time, enjoy! 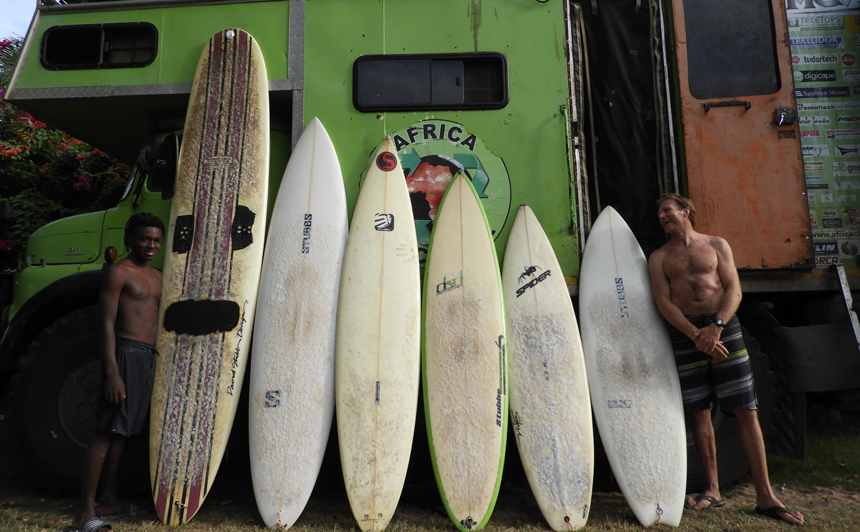 Mark and Zola with their whips. Imagine the stories those boards hold.

(Zag) What’s it been like growing up on the road with your family?

(Zola) Challenging! How would you cope living in a space the size of your bedroom with your parents and sister? It’s fun and tough at the same time.

You’re 14 years young and have had the privilege to find surf in 14 African Countries (Angola, Congo Brazza, Cameroon, Benin, Togo, Ghana, CDI, Liberia, Sierra Leone, Gambia, Senegal, Western Sahara, Morocco, Kenya) – 15 by the time you get home at 15 (Tanzania, Mozambique maybe Madagascar). How has that shaped you as a surfer?

My Dad says I have the wave knowledge to go out at any break and read it like a local. I think I’m going to find it hard to surf with crowds back home because I am used to far more empty spots and getting more waves. 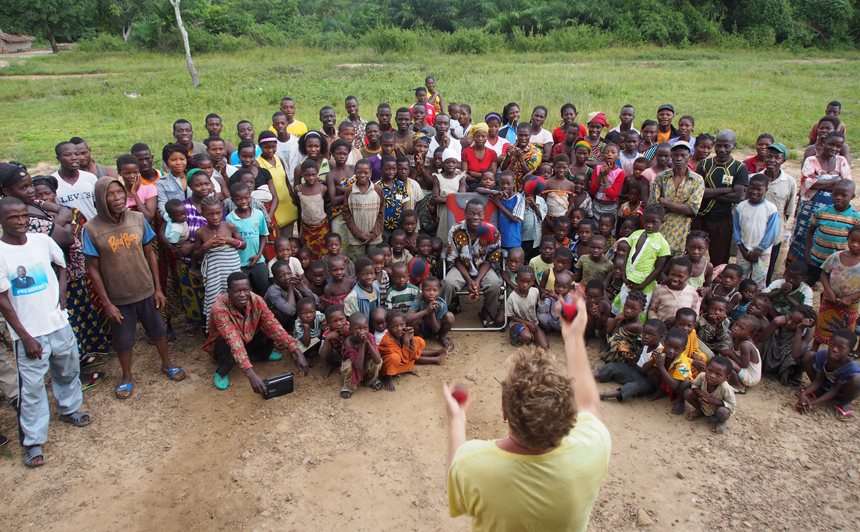 What has it been like to experience every moment with your Dad, pushing you, motivating you through it all?

Everything’s much more fun with Dad. He’s a comedian. He even surfs funny.

You must have a favourite location, tell us about it?

Who’s the better surfer, you or your old man?

Dad, unless the waves are heavy and barreling because I can make the drop while he’s still staggering to his feet. 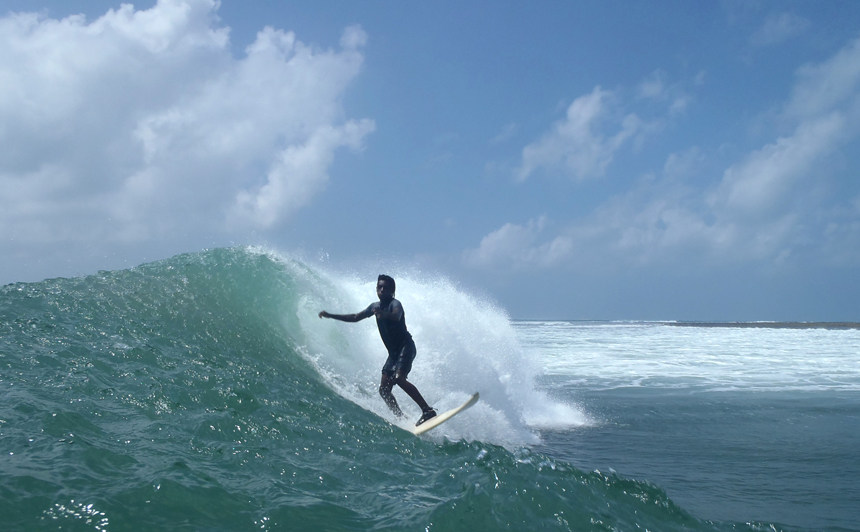 A snapshot of Zola out in his element 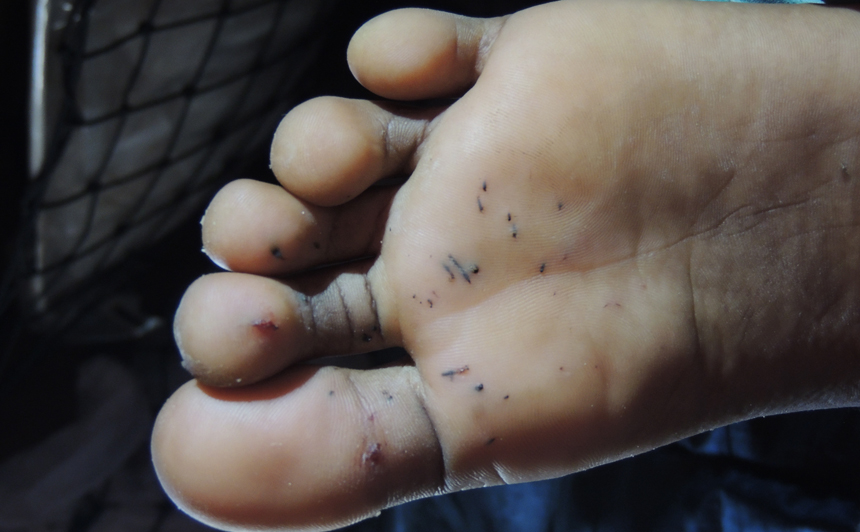 Zola's got 99 problems and the all urchins 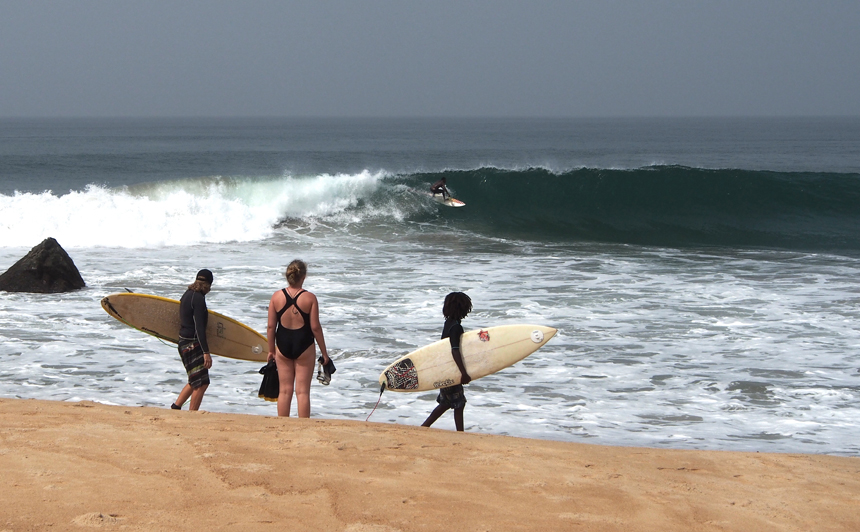 Zola with the traditional "yeah, it's cooking" left glance of approval 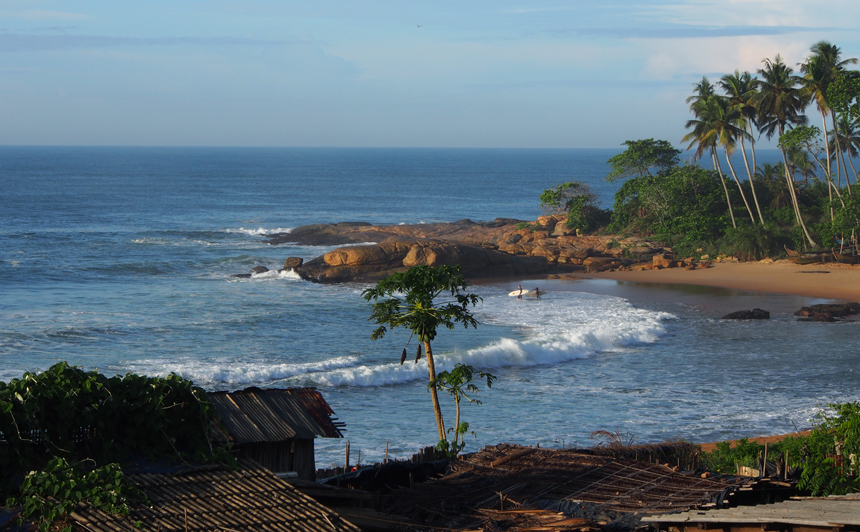 Little bit of family bonding for the lads 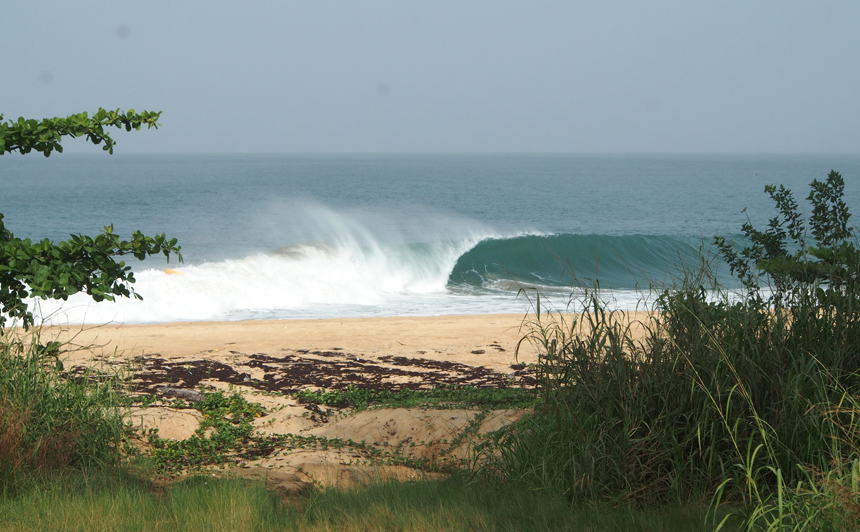 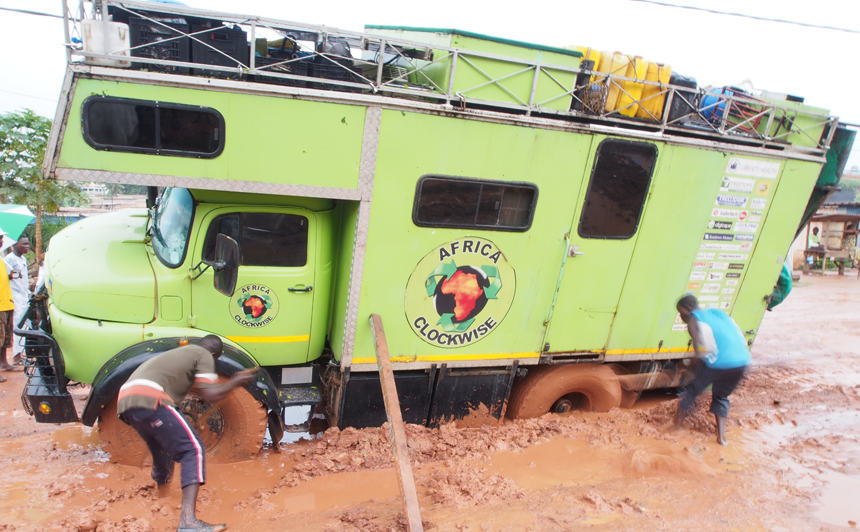 What have been the biggest challenges you’ve faced both in and out of the water?

In one week in Dakar, I had 6 stitches after slicing my heel with my fin and my Dad had to pull 24 sea urchin spines out of my foot with a needle and tweezers. In Côte d’Ivoire on my 10th birthday, we drove out to buy a roast chicken to celebrate and the truck fell in a rainy season pothole. It took 15 guys 4 hours to dig us out.

You looking forward to adopting a more sedentary lifestyle for a while?

If you didn’t surf, what would have been your ‘escape’ whilst on your journey?

Books and music. I have a keyboard in the truck that runs on solar power and I make up tunes. I’ve also learned to juggle and ride a unicycle along the way 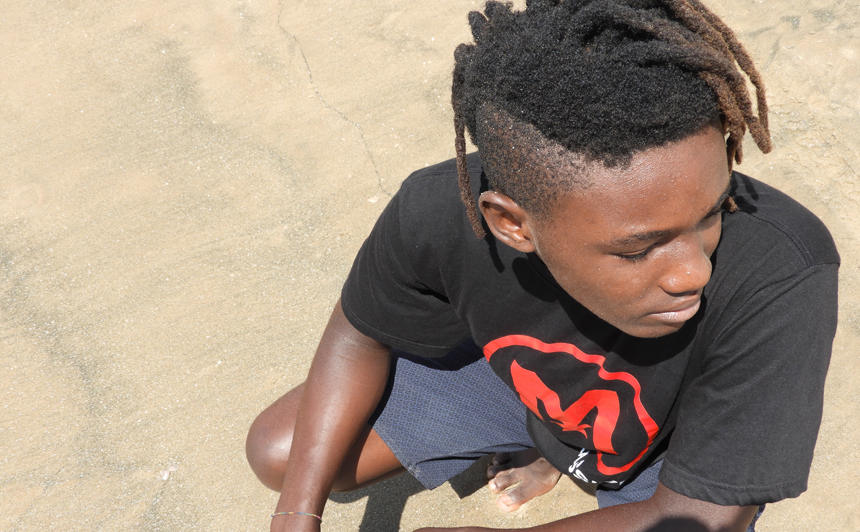 In your own words, how would you sum up the entire journey? What was the mission?

Your a champ Zola, any special shoutouts?

Shout outs to Dave Stubbs and Spider Murphy – South Africans make the best boards – and to Josh Mair and Milan Burnett. South Africans make the best friends. Oh and to my man Da O from Masi Massive for my new gear – proud to be representing the ‘hood’ around Africa. Finally,  Mr Justin Beswick from Greenhouse Systems Development in CT and Kenya, thanks a million for the Clayton 6’1″!

For the full Africa Clockwise feature make sure you grab a copy of the lastest Zag still on shelves, the “Green Issue” (42.7).