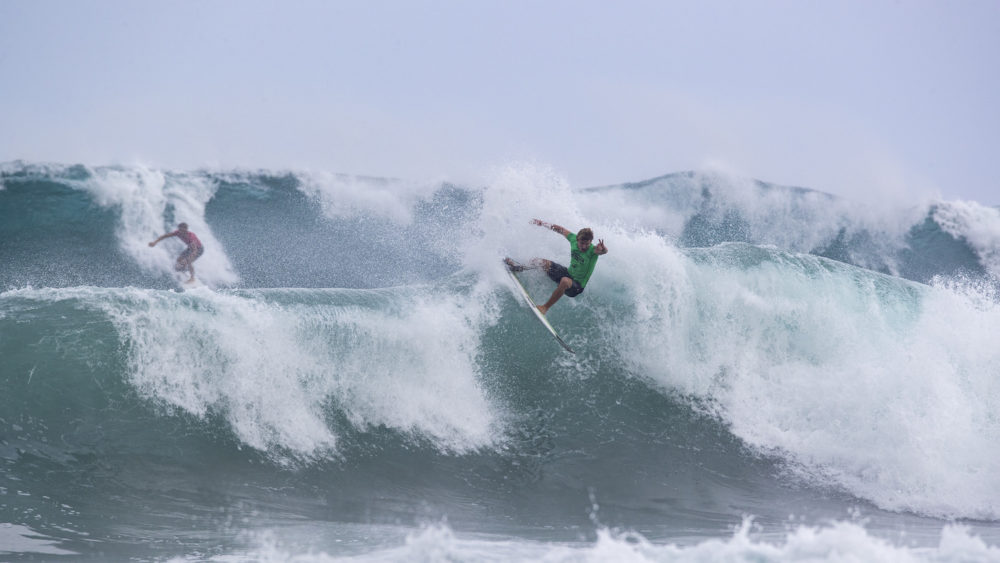 In massive surf at Haleiwa, Matt McGillivray turned on the heat for a scintillating day’s performance in the giant waves at the Hawaiian Pro. McG was dominant throughout the day, advancing all the way through to the quarterfinals.

It was an all-time West swell at Haleiwa Ali’i Beach that made for staggering surf in the 12-15ft range at the Hawaiian Pro, arguably the best conditions the competition has seen in ten years. Wave heights pushed 20+ft all day.

In his round three heat, Matty came up against Conner Coffin, Ricardo Christie and Luel Filipe and won comfortably by going for supercritical moves with total commitment on the biggest waves of the heat.

To further solidify his hunt for a spot on the CT in 2020, McGillivray went on to win his round four heat against some fierce competitors to advance to the quarterfinals.

In round four he came up against former CT surfer Mitch Crews from Australia, defending champion Ezekiel Lau from Hawaii, and Alonso Correa from Peru, and once again emerged victorious by taking off on the biggest waves and surfing with speed, power and flow, to be awarded the best scores of the heat.

“I’m so stoked, to be able to make both my heats, and to be in Finals day tomorrow is incredible,” said a visibly excited McGillivray of his performance. “It’s such a huge opportunity for me, I’m stoked to be here, stoked to be surfing another heat out at Haleiwa.”

Currently sitting at number 14 on the Qualifying Series, this result will count towards his qualification tally. Matt will lose a 900 score and replace it with the result at Haleiwa. Already with 3,700 banked at this event, Matt is set to climb the ranks accordingly.

The Hawaiian Pro will be run to completion in Hawaii tomorrow, and the final event on the QS is the Vans World Cup at Sunset Beach.