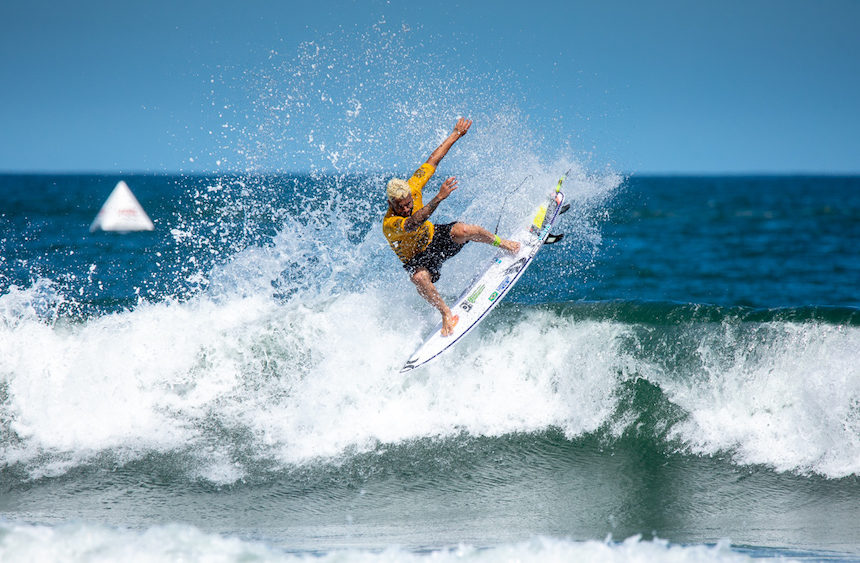 Straight from the WSL gram:

Late for his heat at the ISA World Games in Miyazaki after his passport was stolen in Los Angeles, the brazen Brazzo Italo went straight from the airport to the event, borrowed Toledo’s board, paddled out in jean shorts with less than 9 minutes remaining, had last priority, and won the heat.

Late for his heat at @isasurfing World Games in Miyazaki, Japan after his passport was stolen in Los Angeles, @italoferreira went straight from the airport to the event, borrowed @filipetoledo’s board, paddled out in jean shorts with less than 9 minutes remaining, had last priority, and won the heat 🤯

Following his heat, Italo summed up one helluva journey on his Instagram, looks like Beyrick Devries wasn’t the only one having a rough ride tryna make his heat!

I was robbed 4 days ago in the United States. In my backpack, which they carried, I had some personal belongings and the most important document for a person travelling and not even able to speak the local language perfectly: the passport. This was me. Not knowing where to go, and on the same day, I had a scheduled flight to Japan to compete in an essential world event in search of a place at the 2020 Olympics in Tokyo.

The day after the theft, I had help from some people from Brazil, the United States, and even Japan. They tried to help me with a new passport, a Japanese visa, and the most difficult one: the American visa. All the information said it was best for me to leave the United States to redo everything (make an appointment, schedule an appointment, etc.) at the American Consulate.

So I left the United States on September 8 and embarked for Tokyo, with an interview scheduled for the following day, 09. It all seemed normal, but MY FLIGHT DELAYED BECAUSE OF A HURRICANE – I even stayed 18 hours on the plane. That is, I would not be able to arrive in time for the interview at the consulate in Japan.

So I rescheduled for 8:30 on September 10, the first day of the competition, not sure that the visa would be approved. I was confident and happy, even after all, just coming to Japan. The visa was approved, I left my passport at the American Consulate and started another mission. I rushed to Tokyo Airport for the first flight to the city where I would compete.

My heat was 6th in Round 1, but the event was delayed 1 hour and this gave me a small chance of getting to “time.” When I landed at the airport, I ran: I dropped my bags and went straight to the car of the Brazilian committee that was waiting for me. My heat had already started and it took 10 minutes from the airport to the beach.

Arriving at the podium, 9 minutes left for my heat to run out. I entered the water with the last priority, borrowed board and needing a combination of 12 points to advance. So far everything was going “OK,” because I “just” needed to surf and do what I love most in a short time.

Looking back, I had everything to go wrong with so much going on, but I always had hope until the end. This for me was a story of overcoming, even though it is a championship that does not “count” for the classification of the Olympics because I am seeking my classification by the WSL ranking. I had to be in Japan otherwise I missed the chance and could make myself illegible to the job.

I love surfing and I try my best to perform well underwater and even in the most difficult times I seek strength in God and go up. There’s a lot to roll over there, but for me, getting here has been a victory.

So if you have a problem in your life, DO NOT GIVE UP. BELIEVE! In the end, it will be all right, just believe it is possible.