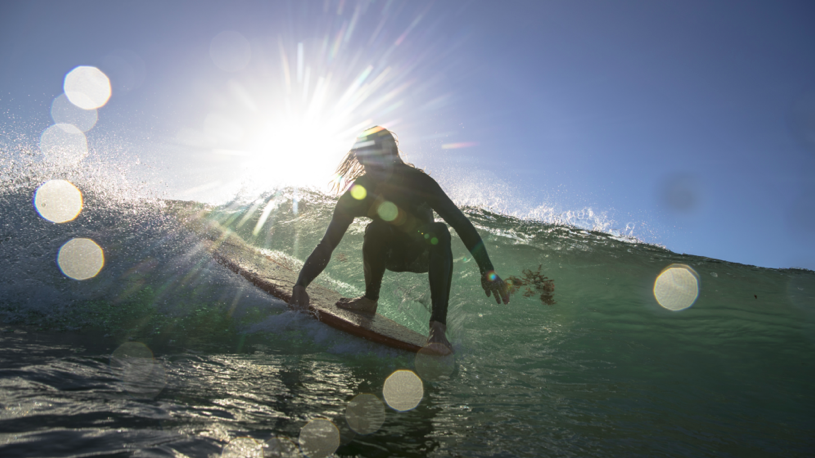 I have this old plank that I’ve become very fond of. It’s a 9ft longboard, rough around the edges, heavy, ugly as sin. I found it at the dump, where it had been discarded and left to die amongst all the other forgotten and unloved things.

I was getting rid of my own car-load of junk when I saw the big blue log, lying forlorn in the skip. I plucked it from its grave, took it home and gave it a new life… After a sticky ding repair, a paint job and a coat of wax, the old plank was ready to ride again.

Now I’m not really a longboarder, but after many years in the sea I’ve realized that having a quiver truly helps you enjoy every kind of wave. I’ve gradually accumulated a ride for almost any condition. In recent years, Durban has not been blessed with a lot of swell, so a longboard was a crucial addition to my garage. If surfing were a martial art I’d say riding a shortboard is karate, whereas riding a longboard is kung-fu. You’ve gotta get a bit more spiritual, meditate your way through the session. Waves are an energy source and it’s vital to get in tune.

For its rebirth, I lugged the resurrected log down to Snake Park beach on a sunny Sunday, did a quick ‘salute to the sun’ and hit the water running. I’d left my leash in the car, too lazy to haggle with the annoying string/leash plug scenario. It was a little detail that almost changed the course of that fateful Sunday.

The waves were small and powerless, but the old log helped me squeeze the juice out of every ripple. In the shorebreak a group of Zionists were having their own holy communion with the ocean – and I watched as a priest in white robes dunked a poor fellow relentlessly in the shallows.

That’s when a bowly left popped up and I spun into position… two strokes and I was up and swooping down the line; the Zionists, like angels in my peripheral vision. I knew they were there, but I wanted to make the section, so I held my line and prayed for the best. Then I caught my outside rail, as the wave hollowed out, and did an unceremonious nose-plant into the sandbank. As I went under I saw the old log cutting a direct line towards the holy man, like a 9-foot missile aimed at the jugular.

The wave washed over me and I lay at the bottom of the sea. I had a vision of the priest with a gash in his head, red blood gushing down onto his pure white robes. In an instant I felt regret, fear, selfishness, before I broke the surface and opened my eyes to the scene…

And there he was, the holy man, clutching my board safely and holding it up to the sky like some kind of trophy. He had a huge gap- tooth grin on his face as the water dripped off the resurrected log. The half-drowned initiate was standing beside him, catching his breath.

I collected my board and watched as the priest gave his follower a whack on the back, grabbed him by the neck and dunked him back into the sea.

There really is nothing as glorious as a salty baptism.