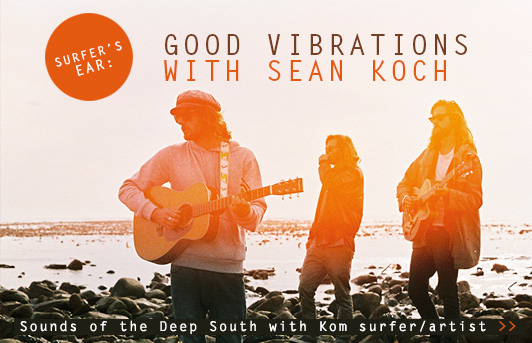 Music and surfing go together like offshores and groundswells: the two just make a good combination. Whether it’s while we’re surfing, working or just relaxing, music plays a major role in all of our lives. With that in mind, welcome to Part III of ‘Surfer’s Ear’, where we catch up with local ocean-inspired artists who’s music is getting some major spin time on the Zag playlist. Missed Part II? Check it out here. 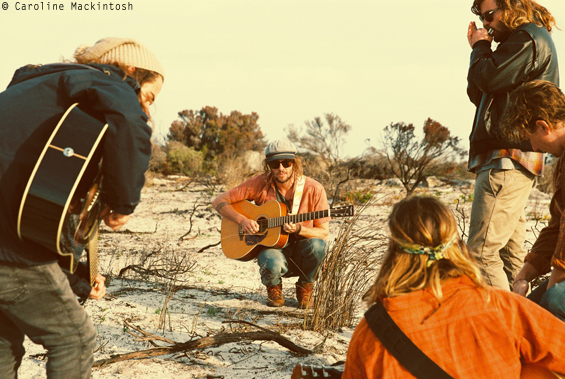 Sean and friends jamming together in Cape Point Nature Reserve.

Name: Sean Koch
Age: 25
Hometown: Born and raised in the deep south village of Kommetjie, now living in the city.
Genre: I struggle to put my music in a genre, it’s for you to decide!
One liner on life: Life for me is all about writing music, getting good waves and sharing happiness!

Tell us about your musical journey. How did it all start?
I think when I was a little grom, cruising around at home to my parent’s golden oldies and my brothers’ reggae which was constantly playing around the house. Both of my parents jammed so there were always guitars lying around. I slowly got into playing and attending guitar lessons, and from a young age I enjoyed writing (especially poems). When I was 18, I started to combine the guitar with lyrics I’d written. 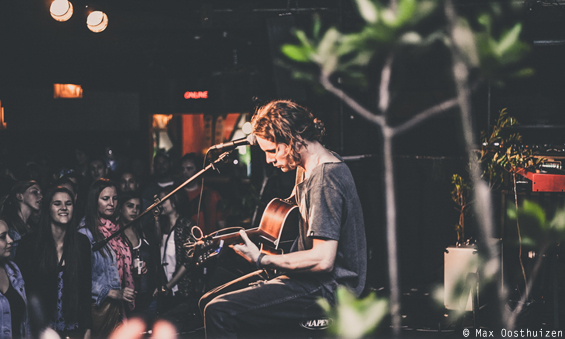 Live gig at Assembly, one of the local venues in Cape Town’s CBD.

Growing up as a surfer, how did that influence you musically?
I was lucky to grow up in Kommetjie; surrounded by the mountain and the ocean with a tight brotherhood of friends and two older brothers. We were always together surfing or in nature, and it was the best way to grow up. I realise now how that has influenced me, especially in a creative sense. Life simply revolved around surfing, playing tunes, enjoying a couple cold beers and watching the sunset.

What have you been doing in-between producing tracks to pay for the broken fins and food?
I’ve been working on offshore vessels for the past five years in West Africa. We work on a rotation basis; normally month on, month off. Meaning that when I’m home in Cape Town I have complete freedom to make music, and surf! It can get pretty heavy being away from everything; but I’ve found that my time offshore has been my most inspiring for writing. I guess being away from everything allows me to reflect, and be still, as opposed to missioning and having a jol. 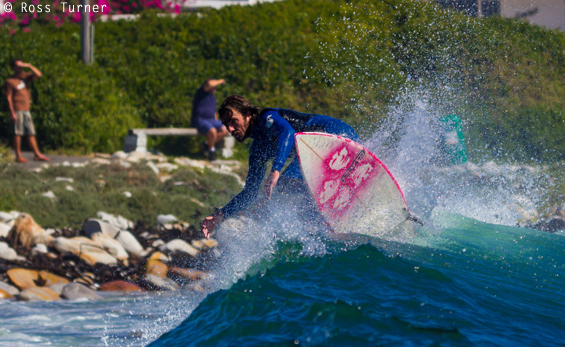 Floating, while enjoying his other passion.

And where are you at now in terms of building a career out of music, is that a future you see for yourself?
Definitely. I’m constantly writing new songs and I’ve been recording a whole bunch recently, with creative, supportive, talented friends. Since moving closer to the CBD I’ve been able to connect and network with even more people. I feel like it has all really gained momentum. The plan is to follow my musical passion, surf, write, play live shows and tour as many places as possible, also giving back a little along the way.

From your perspective, what’s the music industry like for SA artists at the moment? Is making it internationally as a professional musician about as difficult as making the dream tour?
Ha ha… I know in the past it has been seen as somewhat of a joke to make a living as a musician in this country. I feel SA artists need far more exposure, funding and scholarships to make things more possible. But honestly I think the industry in South Africa is full of potential. Social media allows musicians to reach out, promote and share their music to international audiences that they couldn’t reach before.

I dig checking my Soundcloud page to see who is listening and where the plays are coming from – like who would have thought someone in Moscow would listen to one of my tracks?! There are amazing musicians in this country, making incredibly unique sounds; just like there are groms raising the bar in SA surfing, who definitely have the potential to make it on the Dream Tour! 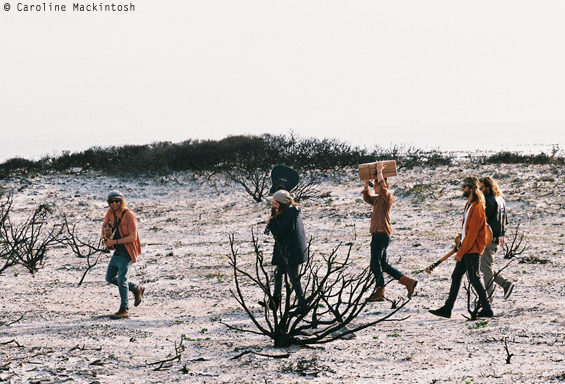 Trudging through some desert-like scenery in Cape Point… looks like it could be their first album cover.

Tell us about your live gigs.
I’ve just recently moved into Cape Town CBD and have gone straight into playing quite a few gigs and also jamming with two other friends of mine, who have brought more energy to my act. I have to be sitting down when I perform, as I play a wooden ‘stompbox’, which sits under my foot that I bring the beat in with. My gigs vary from chilled restaurants, to markets, bars, fundraisers, nightclubs, or even weddings. Each gig is different, and the feedback and response is always interesting.

From whom and what do you draw your inspiration from?
It all definitely comes over me once I’ve gotten out of the ocean. The ocean, people, their journeys through life and nature are all inspiring to me. When it comes to other artists; well my good friend Jeremy Loops, we’ve grown up together and right now he is on the most epic journey following his dream. Other artists like Xavier Rudd, John Butler Trio, Milky Chance and Angus Stone are all people from whom I can draw inspiration. 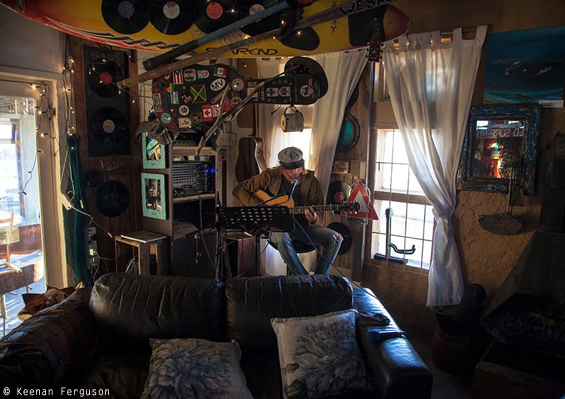 A small live gig at an interesting little pub up the weskus.

And your plans for the rest of the year, what have you got on the cards?
Right now I’m collaborating with very cool, special people who are producing this first album with me. I attempted to record an album a while ago by myself in Kommetjie, but I’ve since realised how much goes into producing quality music, and it’s so exciting to see others just as excited as I am to get my album out there! 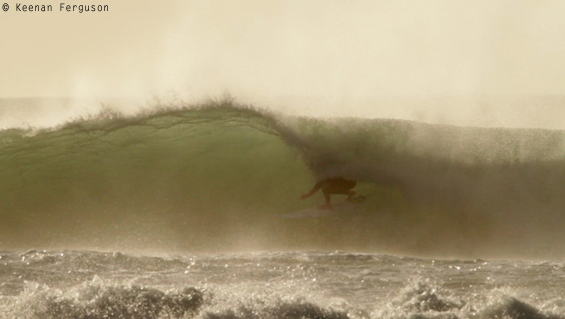 Heading for the exit in a cold, Cape tunnel. 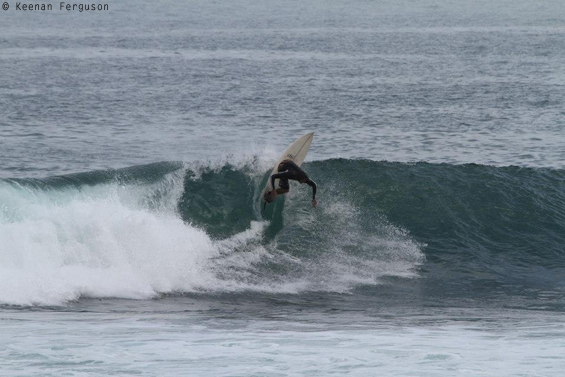 Hooking it off the top. 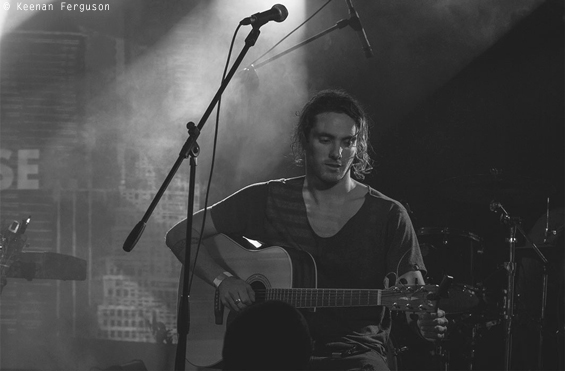 Tuning up for another live gig at Assembly. 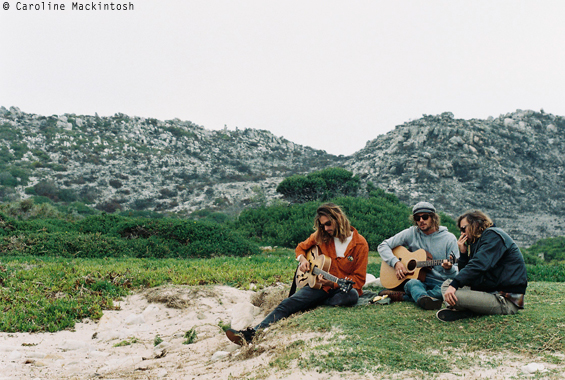 Sean and friends chilling together out in nature.