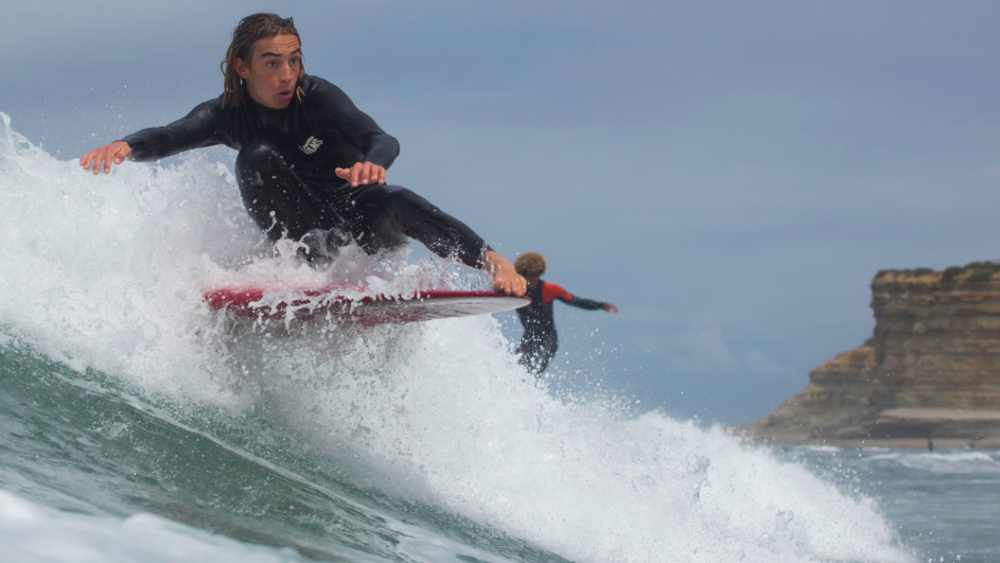 FOMO and the Duct Tape Invitational

Ever hit rock bottom only to find out that it has a basement? That was my experience in not quite attending the Duct Tape Invitational, fast becoming the most fun, most radical and enjoyable alt.surfing event on the planet!

Frothing doesn’t even come close to describing my feelings towards my first official Zag trip and my first foray to Europe. But the old Green Mamba and an excruciatingly slow and uncaring Portuguese Consulate meant that my hopes and dreams came falling off the bone like a slow roasted pig. While Luke Patterson took to the skies a fine syrah pinched between forefinger and thumb and 14 hours of in-flight entertainment ahead, I was relegated to the George in Umhlanga and worse, far worse, still to come. But more on that later.

Over in Portugal, Luke Patterson (after having a mild panic attack regarding the whereabouts of his luggage) had touched down in Lisbon and was on his way to La Point, a beautiful surf camp where he would post up for the next couple days in Ericeira, the event location of the 2019 Vans Duct Tape Festival.

Beginning May 16, the Vans Duct Tape Festival brought together a unique community of surfers, artists and shapers in an effort to engage the local surf community in collaborative ways and continue redefining what a surf event should be all about. For its debut in Portugal, the Duct Tape Festival brought world-class loggers together. Last year’s winner, Andy Nieblas, was joined by rising stars Eurico Romaguera, Diogo Appleton, Kaniela Stewart and Jack Lynch—alongside renowned icons in logging, Alex Knost and Justin Quintal.

For the first time, the event had a women’s division, with heavy hitters such as Kelia Moniz, Karina Rozunko, Victoria Vergara, Chloe Calmon and Honolua Blomfield all vying to be crowned the inaugural European champion of the women’s Duct Tape Invitational.

And while Luke Patt was getting high on the vibe, and feeding me constant updates I was face down in the dirt locked outside my house, phoneless with a broken foot, being riddled by a thousand mosquitos and questioning my life choices.

The visit to the pub following my VISA debacle quickly spiraled out of control. After about 300 tequilas I decided to walk home, learning en route that I had lost both my keys and phone. I scaled the wall jumped the electric fence… and fractured my right heel bone. Adding insult to injury my house was locked up tight with no chance of getting in. Nothing to do but hunker down and wait for the dawn…

Meanwhile, Luke was experiencing one of the finest surf event experiences the world has to offer. These are his take outs:

Party last night was off the hook, dance-offs, people jumping off roofs into pools, DJs, a skate bowl. Pork on a spit buffet. They even called the last song at 12 AM. The DJs response was one more song…. that ended up going on until like 1.30. On the buses home from the events and comp, there was a mic up front and a few kids were rapping or busting out karaoke was such a cool vibe.

Good reggae band and one or two weird others, still sick. There’s a shaping bay and a glassing bay. What I thought was really cool was they made kids pick up plastic and rubbish around the event. They then had glue guns and they were making cool toys from the stuff, pretty inspiring in a sense. Around the event, you play witness to a couple of crazy eccentric characters.  All of which were tryna peacock harder than the next, wearing all sorts of loud, bright and iffy outfits.

Crazy how much weed culture has become an acceptable thing, Joel was blowing his load on the mic at 4.20 every day, quite refreshing when compared to the straight-laced comps we have back home. Joel made all the finalists traditionally sip a beer before their heats. Straight up core surf, can’t beat it.

The surfing was epic! Kai Takayama and the winner Kaniela Stewart (Buttons lookalike) were the best. Both with long smooth rides, holding hang 10s and 5s. Alex Knost had the best when it came to variety just couldn’t find a good backup wave. Andy Nieblas still my favourite, hands down the best showman, however, he got knocked early on, so what do I know? What’s more, there were some classic team waves ridden with board transfers. Awesome to watch, man. The crowd really was treated to one hell of an event!

Cool having the girls involved this time around, it really changed the whole dynamic. The top riders ripped. They really pulled it off with graceful style.

From its inception the Duct Tape mission has been to re-cast what a surfing event can be, to give us a glimpse at an alternate surfing universe that prizes style, attitude and fun as highly as freakishly good technical performances. By all accounts, this year in Portugal, was an absolute cracker. Next year I hope to be tripping the lights on Duct Tape’s dancefloor and not lying face down in the muck with a broken bone.

Watch out for our video dropping soon.