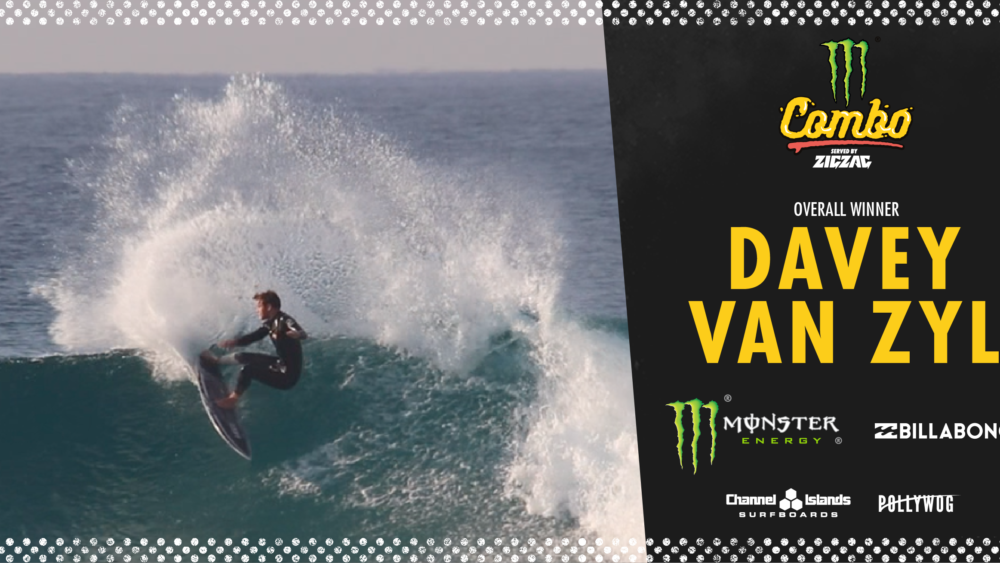 Congratulations DVZ, the official Round 3 winner of the Monster Combo. Davey’s efforts see him win a R2000 Pollywog gift voucher and an entry into the final with a chance to win R20 000 cash + his spot on an international surf trip with Matt Bromley and the Zag and Monster crews. Tatum Holder feeling the good vibes too, banking R2k cash for his efforts behind the lens.

As for the Monster Combo Round 3 Local Hero award? It’s going to the Captain, Kai Linder. Kai scoops a brand new custom Channel Islands surfboard and a toasty Billabong steamer wetsuit.
Ladies and gentlemen, the Combo has officially shut up shop. The finalists have been decided – Manoa Robb, Eli Beukes, and DVZ.

Here’s how it went down in the eyes of the judges in Round 3:

Monster Energy: Sheez, this is a tough one. Eli’s was epic again. Both Davey’s, and Jordy Maree’s were nuts. It’s splitting hairs. In the end, we got to give it up to Davey Van Zyl for some smooth buttery surfing on that Combo. Captain Kai for the Local Hero!

Zigzag: What a Round. The best for last it would seem. Some serious combo’s coming in from the lads. Luke Thompson the man child gets involved, Jordy Maree and his forehand and backhand being put to good use. Some South Coast flavour on display from Gav but in the end, DVZ takes this round… by a fraction! Jordy Maree was nipping at his heels. Kai Linder takes the local hero award!

Davey and wave #77, for the last huge down rail carve. #92 with the kegging barrel and super technical grab rail down carve, with absolutely no loss of momentum, is also silly, but  #77 is the winner just for the size and power of that final carve, on the back of the first one and the barrel.

In the next couple of days, voting will once again open to the public! This time around you’ll be voting for your overall winner. Who’s it gonna be?

A reminder of what’s up for grabs:

R20 000 cash + a 10 day FREE international Zigzag editorial trip in 2021 with Matt Bromley, the Monster team and the Zag crew.

The monthly prizes consist of:

An R2000 Pollywog gift voucher, a case of Monster Energy and an entry into the final for the GRAND PRIZE!

R2000 cash, a case of Monster Energy and entry into the final for the Videography Grand Prize.

A brand new Billabong wetsuit, a custom Channel Islands surfboard and a case of Monster Energy!