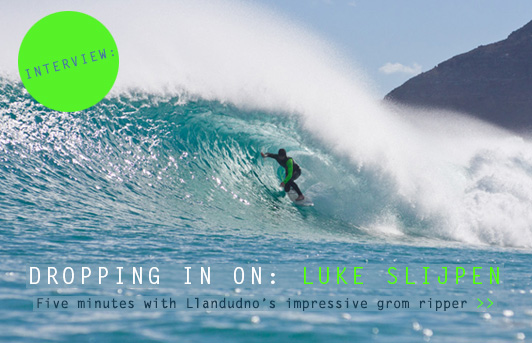 Dropping In On Luke Slijpen

From far up the east coast in Richards Bay and right around our coast all the way to the weskus, South Africa has a healthy collection of ripping Juniors. Stop at many of the major surfing locations along the N2 and beyond, and you’re very likely to find a grom that’ll impress you with their skills. One of these Young Guns who has caught our eye this year is 14 year-old Llandudno local, Luke Slijpen, who has upped his game big time in 2015 and ripped his way to some impressive results. 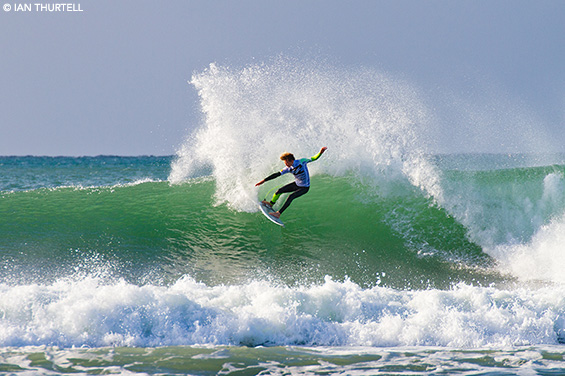 Luke, burying his rail at Magnatubes during the Billabong Junior Series event in July.

Luke has been working closely with Liam Wood from Cape Town Surfing, who has been coaching him for the past four years.

“He started with us as a learn to surf grom,” said Liam of the talented regularfoot. “He hasn’t been surfing long but trains with us at least three to four times a week. He surfs every hour of the day when he is not at school, and is such a hard worker.”

“Luke is super quiet and shy, but he lets his surfing do the talking. He analyses everything to do with surfing and really takes it all in – watching what others do and keeps his eyes on every heat during an event or online.” 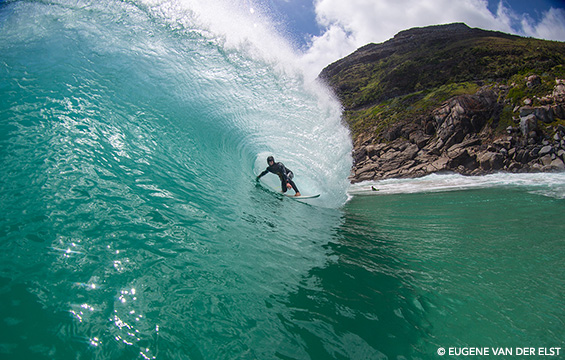 Luke scored this wedging pit recently. Check it out in our ‘Sequence of the Week‘.

“We have been really focussing on his rail game for the last year,” continued Liam. “Some guys say it’s the best in the country for a lightie, and he is starting to land air reverses in comps, which is now his main focus.”

“In my opinion, Luke is the best young surfer at Llandudno right now. He has the rail game, surfs top-to-bottom and has his barrel game waxed. Perhaps most importantly though, his mom and dad are so supportive.”

Once we’d heard from his coach, we dropped in on the Llands ripper to learn a little more.

ZIGZAG: Howzit Luke, how old were you when you started surfing, and what got you amped to start?
I started surfing when I was 10 years-old. I was already spending a lot of time playing in the sea when I was young, so I guess I needed something more exciting and that was surfing. 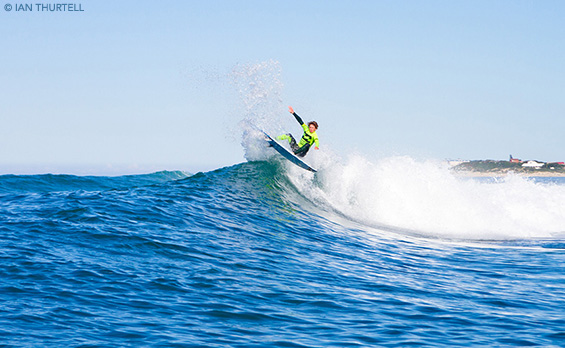 Blowing his fins out the back at Magnatubes.

You’ve been achieving some good competitive results this year. What can you attribute this to? Good coaching, extra training, or something else?
My coach, Liam Wood, has been great. Extra training, time in the water and believing in myself have helped.

When the waves are flat, what do you usually keep busy with?
Skating at the funbox and deathbox – sorry, I can’t reveal the location. 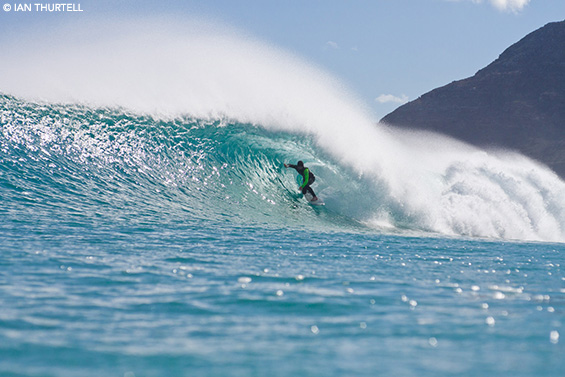 Scoring an icy tube back in August.

Have you travelled for surf much in South Africa and around the world? Where are some of the places you’ve scored your best waves?
I have not travelled much at all other than up the east and west coast, but I am going to Sri Lanka during the December holidays. I have scored my best waves in J-Bay, Cape St Francis, Vic Bay and many others I can’t mention (laughs).

Llandudno is one of the most popular beaches in the Western Cape. Has the local crew there really helped to push your surfing. Who are some of the guys you really look up to there?
Yes, definitely. They really are pushing my level of surfing. I really look up to Royden Bryson, Josh Brody and the Eales brothers amongst others. 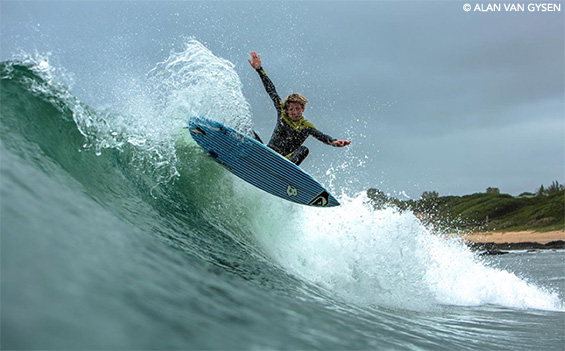 Whether in a contest vest or while freesurfing, the results are the same; radical.

Some of Luke’s results in 2015:
• Winning WP trials.
• Quarter Finalist in the Under 20 division at the Quiksilver Get Free event at Long Beach (he beat Slade Prestwich in the process. I think that’s what started his momentum this season – Liam Wood).
• 3rd in Under 14 at the Boss of the Moss, plus Best Power Turn in the Expression Session.
• 2nd in the Under 14 division, 4th in Under 16, and Bos Surfer of the Contest award at the Billabong Junior Series event at Seal Point.
• 3rd in the Under 15 division at the Billabong SA Junior Champs in J-Bay.