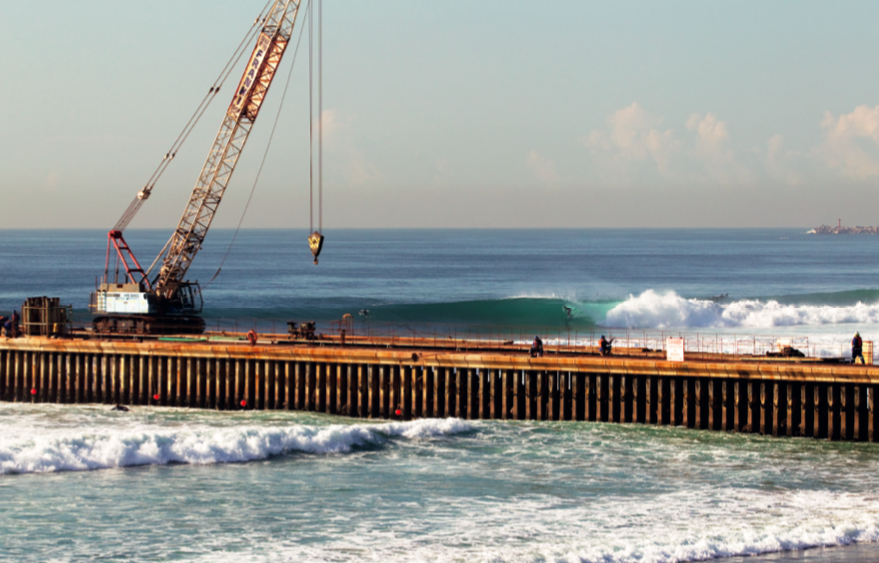 It’s another day on the ‘Golden Mile’. Kids run barefoot between the lifeguard towers, sand covering their skin like the sprinkles on their icecreams. Surfers sprint past them like warriors, slicing the air with their fibreglass shields. Oily buffed chests skate past the palm trees, while the sandcastle artists carve the KZN dream from their empty stomachs and a million tiny grains. People travel far and wide to this place of polarities, and for many different reasons. On any given day, beachgoers can be seen with their trousers rolled up to their knees, filling up plastic containers in the foamies. They are harvesting one of Durban’s most sought after natural powers – seawater. 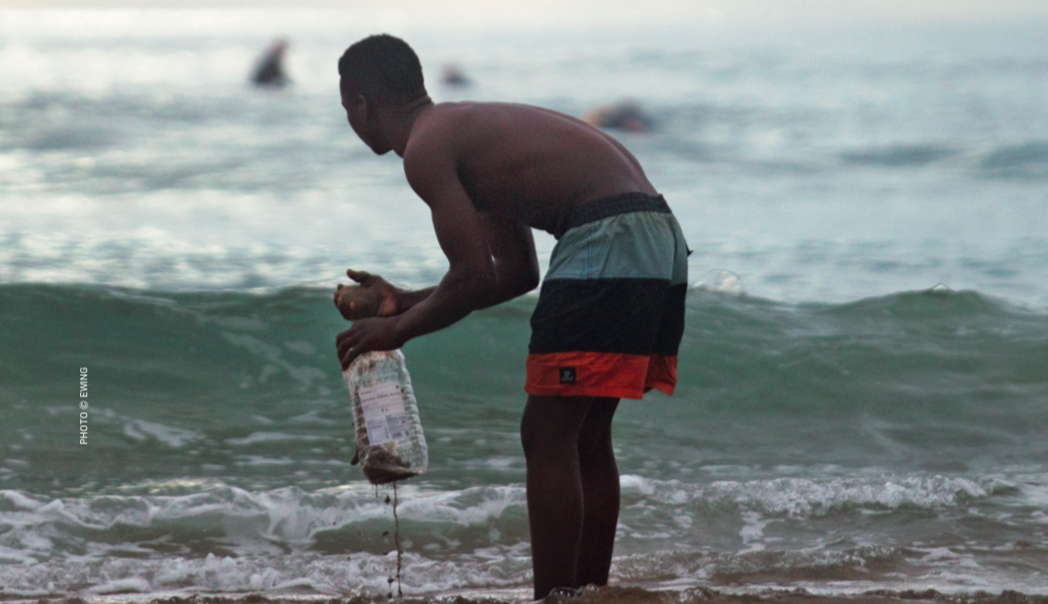 Mncedi left home at 15 and for many years has been a part of a small informal beachfront economy – selling plastic containers and a seawater collecting service to visitors who want their piece of the potion. There are roughly 25 seawater sellers operating regularly on the beachfront, and like Mncedi, this hustle is their food and shelter.

On a decent day, the seawater sellers will make about fifty bucks, enough for a night in a shelter, maybe a loaf of bread and a loose. If it’s quiet, they’ll be cuddling up for the night between concrete and cardboard. Often perceived as a lower-class gig, performed by whoonga addicts and thieves, seawater selling generally has a bad rap. “The containers are just a front,” says a decade long North Beach car guard who wished to remain anonymous. “They’re opportunists, just waiting to grip something out your car or your jean pocket”.

Despite this perception, seawater selling is a growing and profitable trade. And this is how it works (most of the time)… The five-litre plastic containers are bought by the seawater collectors from restaurants along the promenade for R2 each. They are generally sold at R15 for 5 litres and R10 for 2 litres. And for a couple-coin tip, the sellers will fill up the bottles for you, no problem.

But the trade of the water we surf in extends far from KZN’s salty shores. In Jozi, 5 litres of Durban seawater can sell for as much as R500 and 2 litres for R200. For centuries and across many different cultures, the ocean has been a sacred place of spiritual renewal. We all know the sea has mystical powers and religious symbolism, but why are so many paying for something that is almost as abundant as air and dirtier than a bellybutton?

In many South African cultures, the sea is a place of the ancestors, carrying the knowledge of the past. In traditional Zulu culture, seawater has many uses – the most well- known being the drinking of the water as a purgative, to cleanse body and soul from evil. In other words to puke and shit your innards out. “You are reborn after you drink it,” explains a more poetic Sabelo Mlaba, a saltwater seller from Hammarsdale.

For years, Durban’s seawater has been rumoured as being “the most polluted in the world,” with recorded high levels of cholera-causing E.coli and Enterococcus bacteria, not to mention micro-plastics and the recent medical-waste scare. Nonetheless, the water is still drunk by hundreds for cleansing. 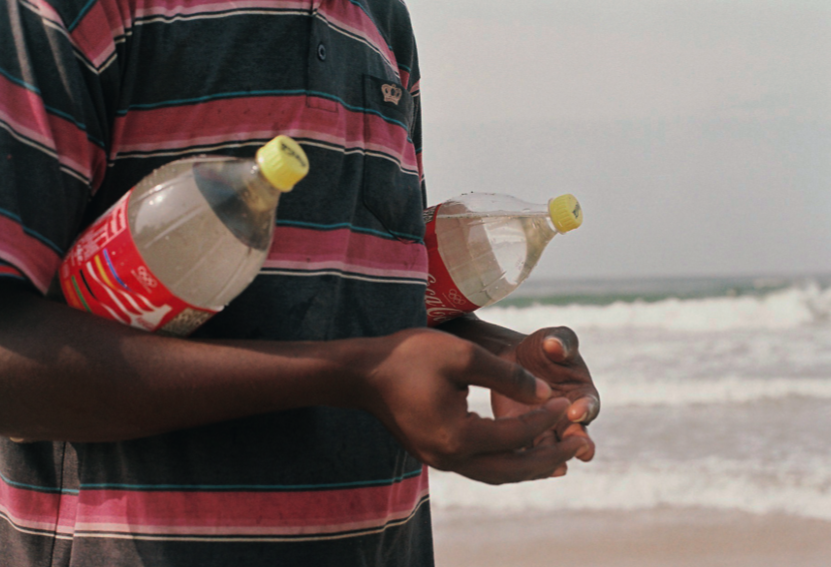 It is important that a small layer of sea sand is present at the bottom of the containers. According to Sabelo “the water is crying when it leaves the ocean” and if you take it home without the sand, in the morning the water will have disappeared and returned back to sea where it wants to be.

The sea sand itself also has its powers and is often sprinkled over household gardens to dispel evil spirits and ward off wrongdoers. “If wrongdoers come in the night, they will not see the yard, they will see the ocean and not enter,” Sabelo explains, painting me a picture with the black tar dredged beneath his fingernails.

For those who live far away from the coast, a seawater take-away is often used for bathing. It is believed that bathing in seawater will bring good fortune and wash away sins. “The water has healing properties and by covering the body in it, body and soul are re-connected,” says Bongumenzi Ngobese, a traditional healer and Fine Art Lecturer at the Durban University of Technology. ‘Menzi’ also uses seawater for his traditional remedies and speculates that the water pollution stats in Durban are just a ploy to prevent the greater public from using the sea, to redirect it for commercial tourism.

Less controversially, the seawater is also collected as proof that one could simply just afford a holiday to the sea. Taking selfies with their seawater container atSouth Beach was Alex and Ivy Nkomonye, a young honeymooning couple from Swaziland. “We take the water home to show that we are prospering,” Alex told me, lathering himself in sand.

Be it internal or external, spiritual or superstitious – the theories and uses of seawater in South Africa are vast. But not all those filling up their bottles are getting the flush of good fortune.

Mlondi Cele from Mayville has been filling up containers on the beachfront since 2006 to support his wife and three kids. “Many families are getting fed because of the beachfront,” says Mlondi after recalling a time he made 500 bucks filling up 20 litres of seawater for a Jo’burg big shot.

But according to some of the collectors, security often confiscate their containers, slash them with knives, and tell them to “voetsek” from the beach. “They say we are making Durban dirty,” Mlondi tells me, dipping a container in the shore like a rusk. “They say they don’t want to give permits to usikhotheni (thieves or hustlers).” According to the eThekwini Head of Communications Unit, Tozi Mthethwa, the seawater sellers are not issued beachfront permits by the Municipality as the informal trade is a public health risk.

“Anyone who sells salt water or plastic containers that are not endorsed and approved by the City’s environmental good health standard and regulations is contravening Trading By-laws. Trading By-laws restrict informal trading activities that could create a health hazard to the public,” says Mthethwa. Health hazards and By-Laws aside, the fact is that eThekwini Municipality’s official unemployment rate is 16,5 percent (according to the Quarterly Labour Force Survey released by Statistics South Africa in 2015). Yet it seems many who are trying to create jobs for themselves are being weeded from Durban’s commercial hot spots.

“People look at us like they don’t know what we are,” says Siyanda Makhatini, another young seawater seller whose been wearing the same decaying t-shirt for the past week. “They see one rotten potato, they think we are all rotten potatoes”. Alex Nkomonye enjoying his ‘honeyday’.

In ancient times it was customary to place the saltcellar in the centre of the table at meals. Above the saltceller sat the superiors, and below the inferiors; hence the expressions our grandparents might use: “above the salt” and “below the salt”. Whether you’re sitting above or below the salt on the table of South African society, everyone needs their share of water. Whether you swim in it, surf in it, drink it or just want to simply stare at it.