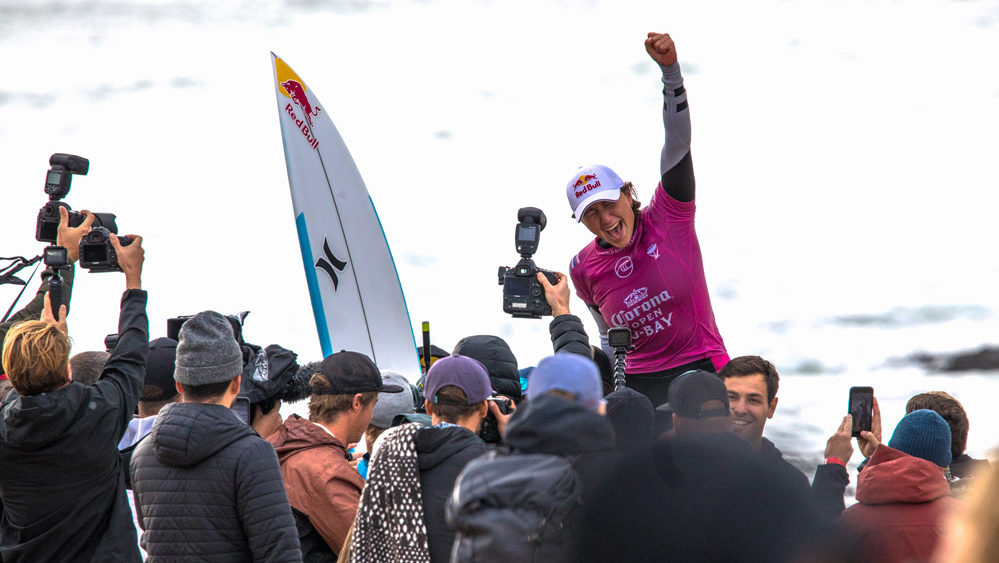 We awoke to a howling south-westerly wind, icy, straight from the Antarctic with intermittent rain showers and a thick dark raincloud that hung overhead like you were awaiting a court judge to decide your sentence. It was a classic J-Bay winter’s day. The type of day you wake up and know there’s surf, no need for wave checks. Cancel your plans baby, wax-up your step-up and get down there! 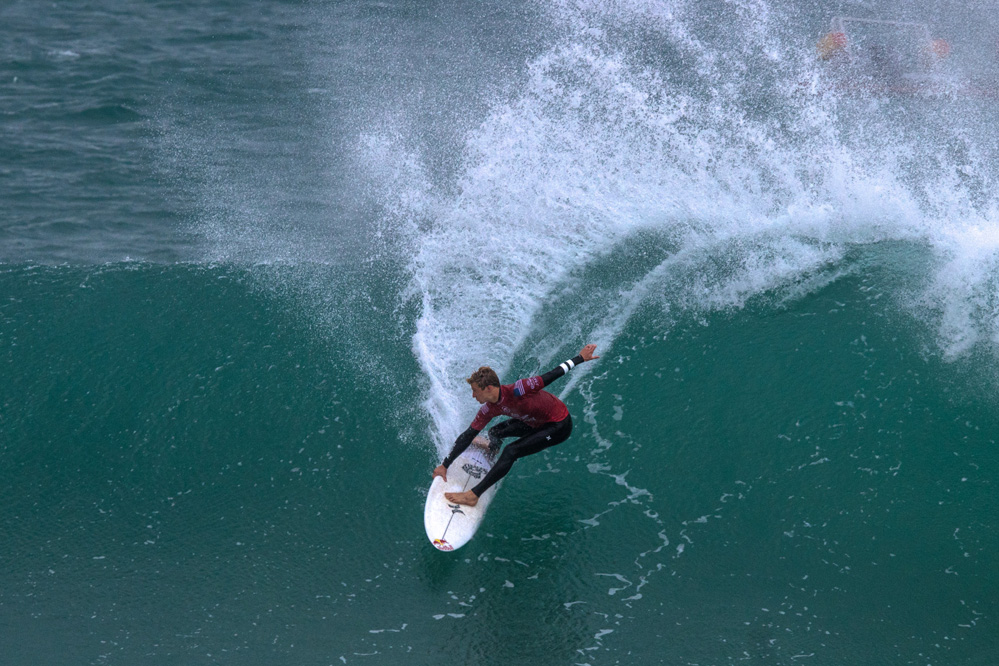 Kolohe Andino spun out against Gabriel. He surfed a terrible heat, taking insiders at firing J-Bay, he does leave J-Bay however wearing the yellow jersey.

Although the forecast looked more appealing for tomorrow, Travis Logie wasn’t willing to take any risks and called Finals Day ON! And a great call it was, nothing like finishing the competition in the kinda conditions that made Supertubes famous in the first place.

Here’s what went down on finals day.

First up, the men’s quarterfinals, Gabby vs Owen, a goofy-footed affair. Lord knows Gabby was never going to lose to Owen. Owen’s first four waves he acquired no score over a 5. His elongated frame acted like a racing yacht sail in the wind and his pinched rails didn’t aid in his advantage over the chop whipped up by the howling southwesterly wind. By the time Owen awoke from his slumber and put something meaningful on the board, Gabby already had a stranglehold on the heat and placed the final nail in the coffin courtesy of the first excellent score of the day, a nine-point ride. 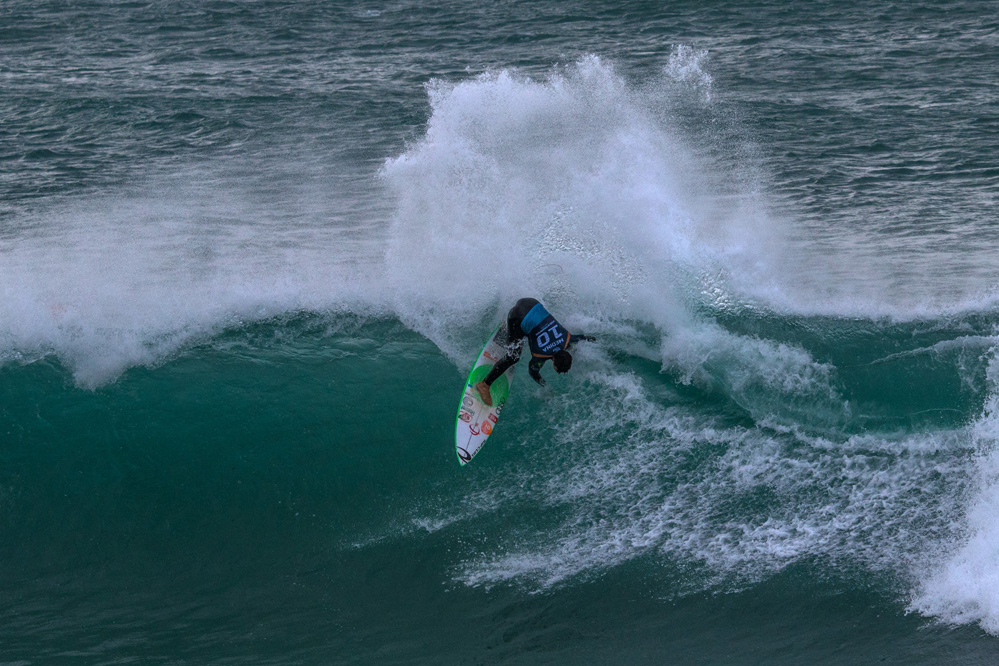 In heat 3, of the quarterfinals, we got to witness Filipe Toledo vs Hawaiian Sebastian Ziets. A classic matchup, both Ziets, and Toledo had been doing some extraordinary surfing throughout the event. Filipe started off quick, dropping a couple of mid-range numbers, keeping busy and then Sebastian dropped a hammer, finding a wave that ran perfectly down the Supers point, laying down what we’re calling the turn combo of the whole event; an elongated drivey bottom turn into a huge down carve, he held the rail so long, Greg Ewing, the Zag photo editor, made himself a coffee downstairs here in the Media Centre and upon his return, Seabass was still mid carve, Seabass then went straight into another bottom turn and garnished the combo with a crazy blow-tail off-the-lip. Sebastian then pulled into the pit and fell off. But the damage was done and the judges love nothing more than a well-executed two-turn combo – they froth for that stuff, bet a couple of them even fell off their chairs up there in the judge’s tower. On a side note though – what the hell happened to Ziets? We’ve never seen him surf so refined. Is it cause he lost his major sponsor or is he taking life more seriously considering fatherhood!? Whatever’s going down, we dig it! Anyway, Filipe took the heat, but damn, Ziets’ combo stole our hearts.

Certainly the best combo of the event, Sebastian is surfing better than we’ve ever seen him surf before.

Yesterday we wrote about four people we thought could win this thing, we got it horribly wrong on the men’s side, we nailed it on the women’s side. Lakey had been a standout all event long, angsty and in attack mode, Lakey struck every lip in her vicinity, Carissa, on the other hand, had been moseying along, making heats but not destroying them, that is until day 5, where Rissa came out the blocks swinging, acquiring easily the highest heat score total of the event. From day 5 it looked like we were in for a Carissa, Lakey final and that’s exactly what happened. When big groundswells make their way up the coast and are met with heaving southwesterly winds at J-Bay, Supertubes becomes a challenging wave to surf. Chops rifling up the face, plenty of power and spray everywhere. It looks dreamy, but to acquire the dream you have to grind. And Carissa, growing up in the power plenty waves of Hawaii, looked as happy as a kid in playschool, handling the power like she was out at Honolulu Bay and she dispatched of Marks with relative ease. Lakey, on the other hand, seemed to make heats through pure determination. Reckless abandon and without care for her physical well-being, she threw herself at sections most of the girls decidedly avoided, she found herself in the finals and rightfully so.

So yesterday I was surfing Boneyards with three other people, one of the three was a quirky looking British dude; he had a thick black moustache, long black hair and a surprisingly high-pitched voice. In a higher than usual tone, he told us how wonderful Carissa was to him in the water, how she smiled at him and even recognised him on the beach the next day. He later went on to described how “Lakey was so mean, straight up savage” to him. How she verbally abused him for half paddling on a set wave and pulling back. I thought it quite amusing how she gave him the ‘what-for’ for a half paddle, hell, he’d been half paddling for waves the entire session we shared together, I’m not surprised Lakey took on a disciplinarian role! But anyway, I found it ironic how the final seemed a battle of sweet vs determined, easy-going vs disciplinarian. 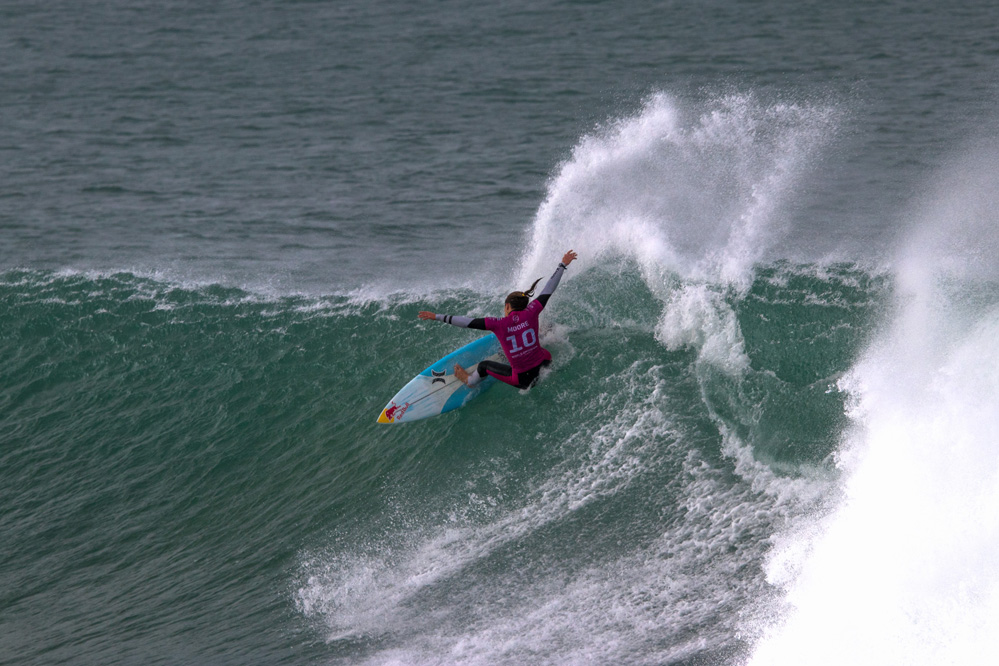 Lakey began the final determined as per usual. Going big, hitting every section as hard as she could but Carissa just looked so comfortable in the windy, tricky conditions at Supertubes. Determination only gets you so far, until you meet another determined surfer with more skill. Carissa found herself a wave that reeled off with perfect pace and she went to town on that thing. She went to the Builders Warehouse and picked herself up a bunch of power tools put on her DIY work(wo)mens belt and went berserk! Taking that wave apart like someone said something offensive about her mother. Carissa emerged the victor and leaves J-Bay leading the rankings with a fresh new yellow jersey. 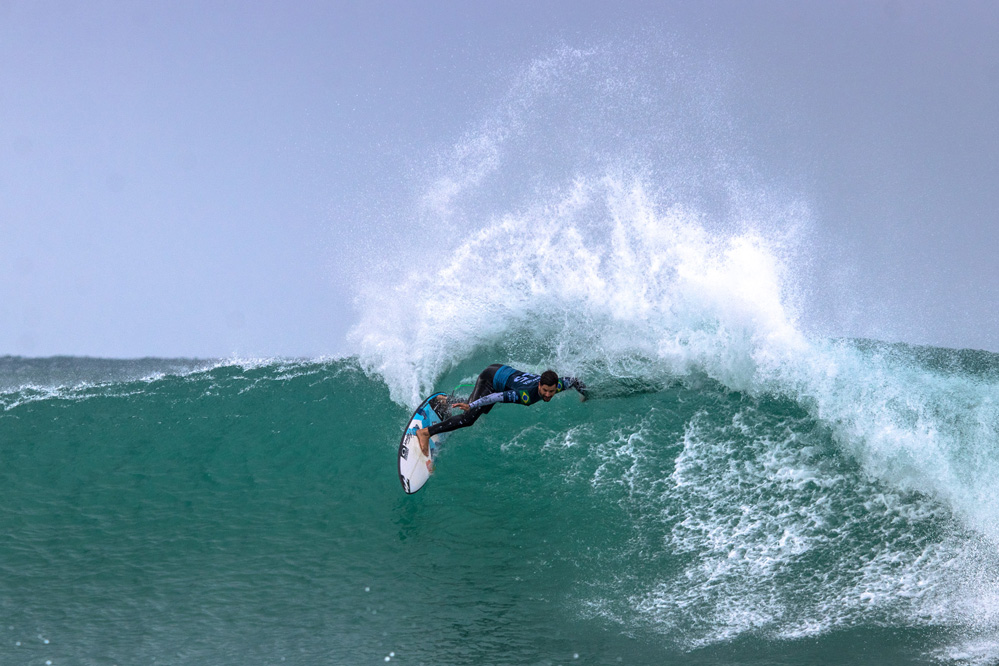 The Men’s semifinal saw two Brazilian goofy footers i.e.; Gabriel Medina and Italo Ferreira emerge victorious against Kolohe Andino and Filipe Toledo respectively. It was the first time we’ve seen an all goofy foot final at J-Bay and the first time we’ve enjoyed a goofy foot winner since Occy way back in 1984. The battle started with the usual Gabriel Medina cat and mouse trickery, paddling the Italian Ferrari far up the point before slingshotting his way down the point and into position. But it was the Italian Ferrari who won the battle, hunting Gabriel down the line like a black panther in the Amazon. And he found the first noteworthy wave; a classic Supertubes groundswell set wave which Italo proceeded to garnish with multiple excellently timed backhand cracks. Many of the (backhand) surfers were getting caught behind sections, surfing too vertically, not projecting down the line out the lip and not using their bottom turns to traverse sections, but not Gabby and Italo. For two Brazilians who probably grew up surfing beach breaks, damn, they surf J-Bay on the backhand like they grew up here. It was but for a moment that we thought Italo might have Gabby on the ropes but Gabby had already smelled blood, the blood of John John pulling out of competition thanks to his knee and Gabby doesn’t melt away like a soft-serve under the hot South African sun when he smells blood, no sir, he goes for the kill. He surfs to win and with no concern for loosing. Gabby responded to Italo’s massive 9.10 with a 9.73 and then backed his 9.73 with a near excellent 9.77. And just like that, we had our first goofy foot winner in 35 years. 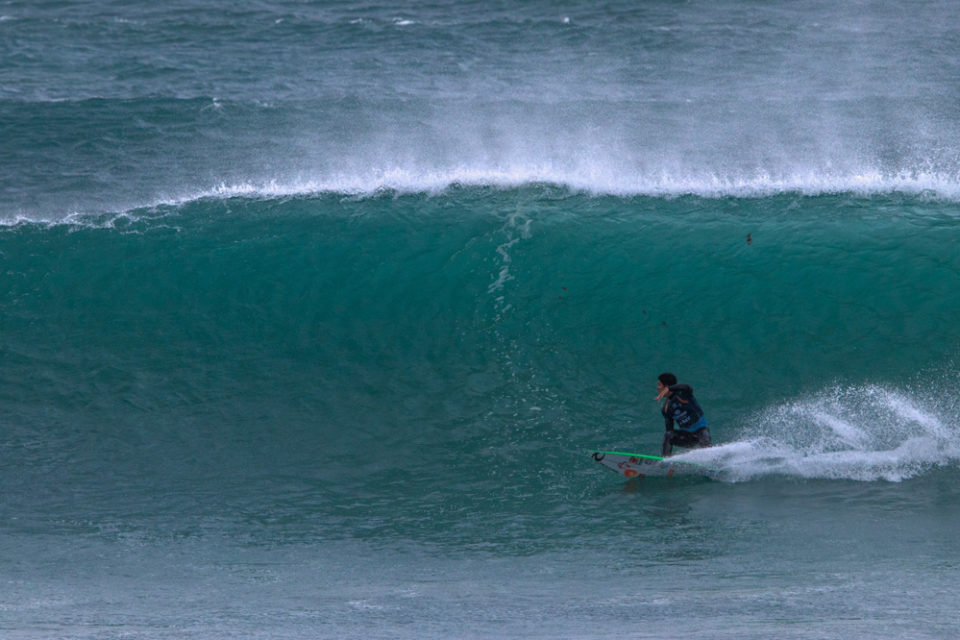 At J-Bay your bottom turn is extremely important and Gabby has a superb backhand bottom turn. 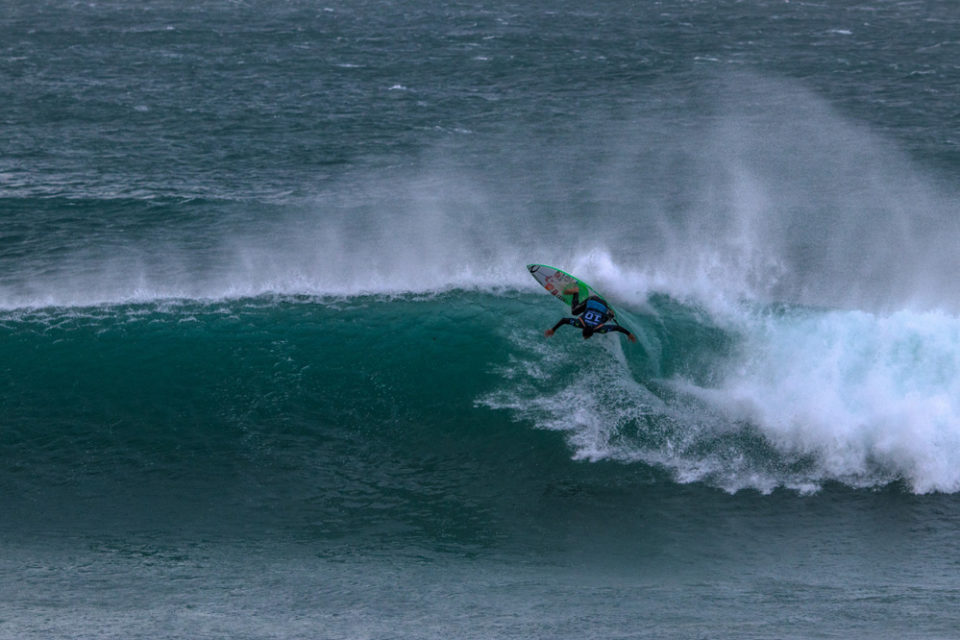 You can't surf any tighter than that. Gabby Medina. 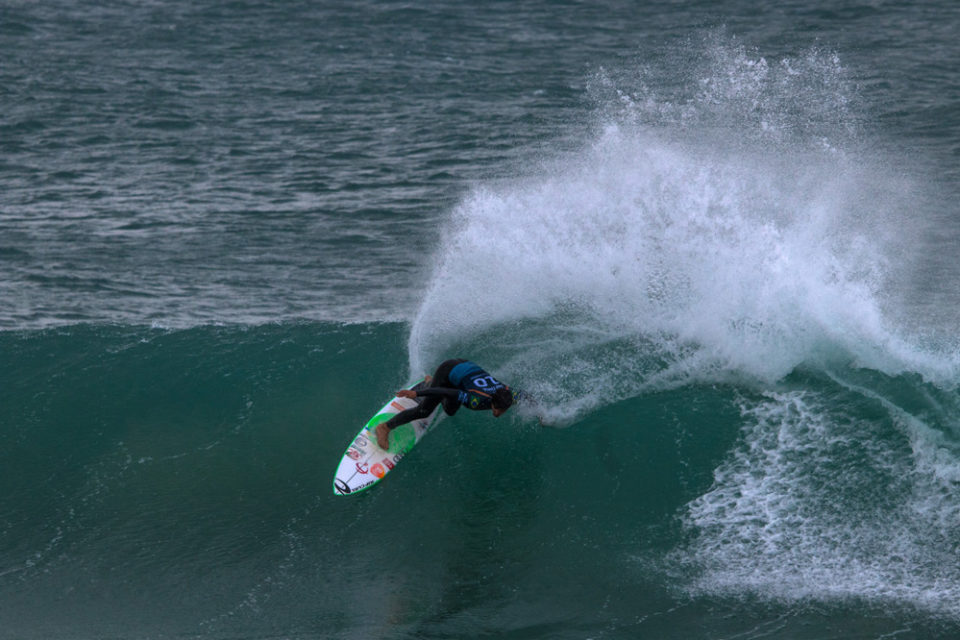 The Gabby Medina down carve. 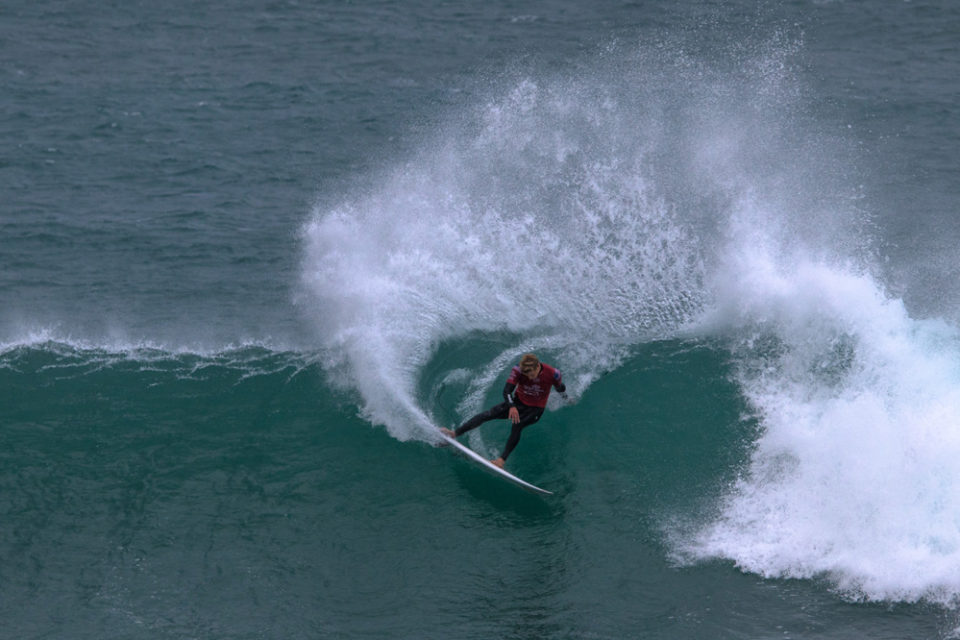 Kolohe needed his dad on the beach to scream to him, "TAKE A REALK WAVE!" cause he kept on going on insiders. 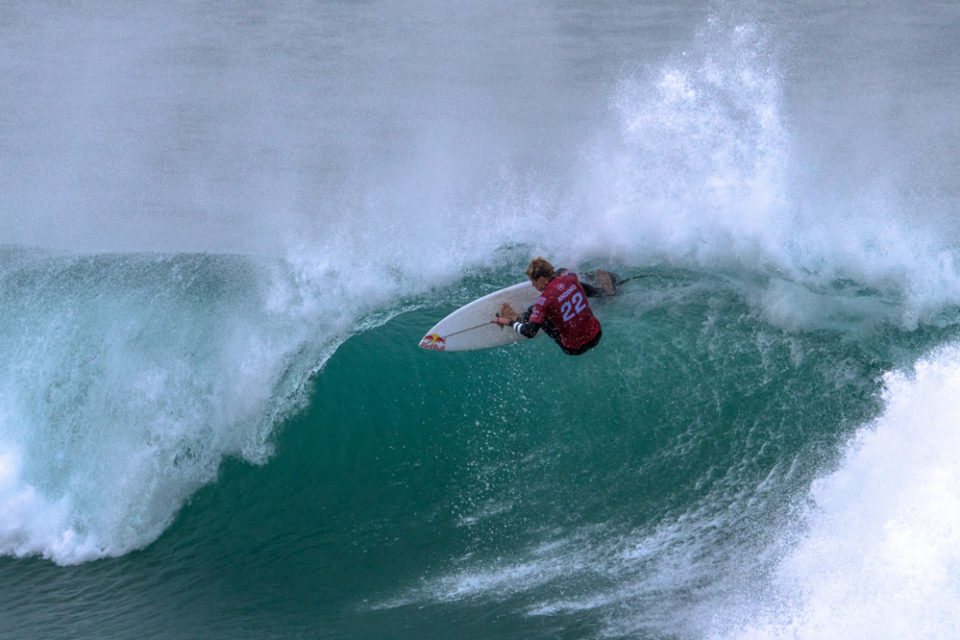 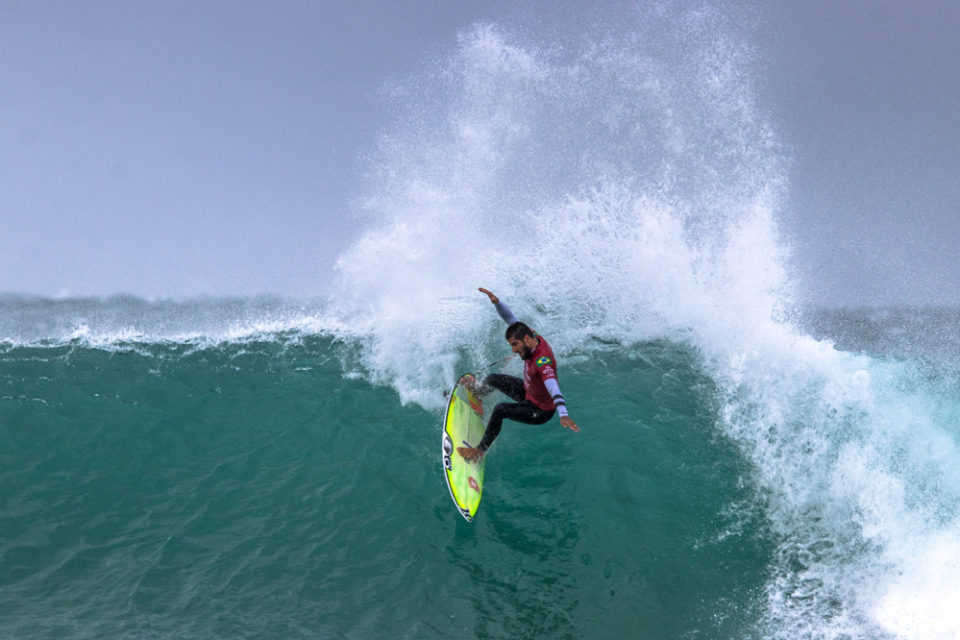 Filipe missed making the finals by the slimmest of margins, but he now lies second in the rankings. 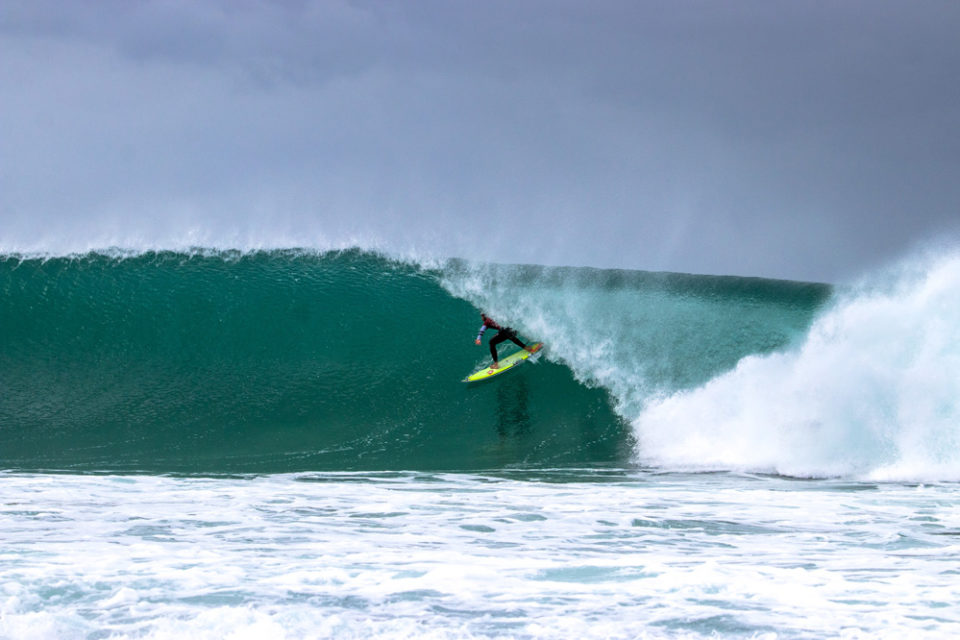 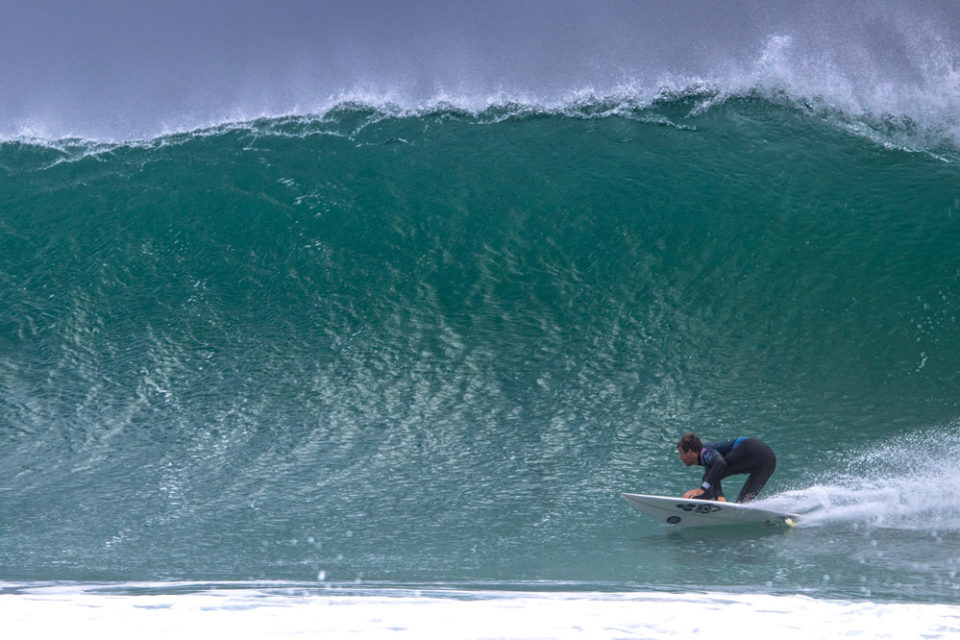 Sebastian setting up his classic combo. 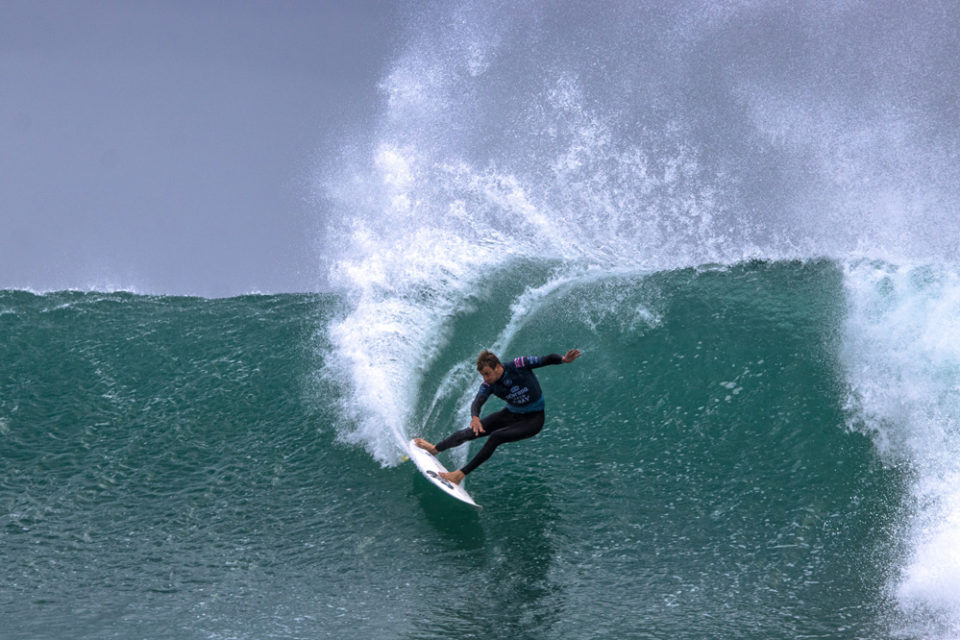 The judges about to fall of their chairs. 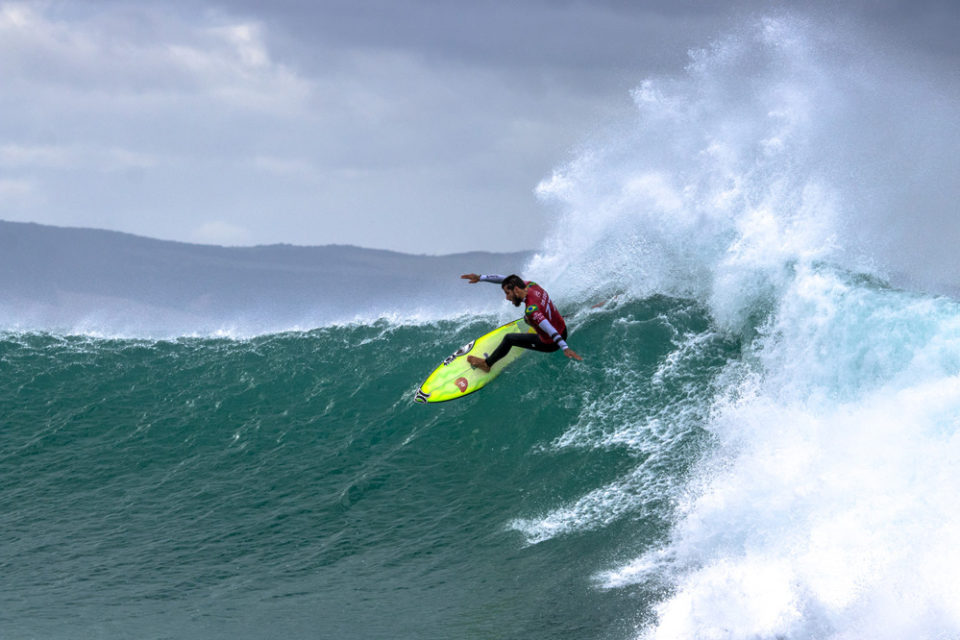 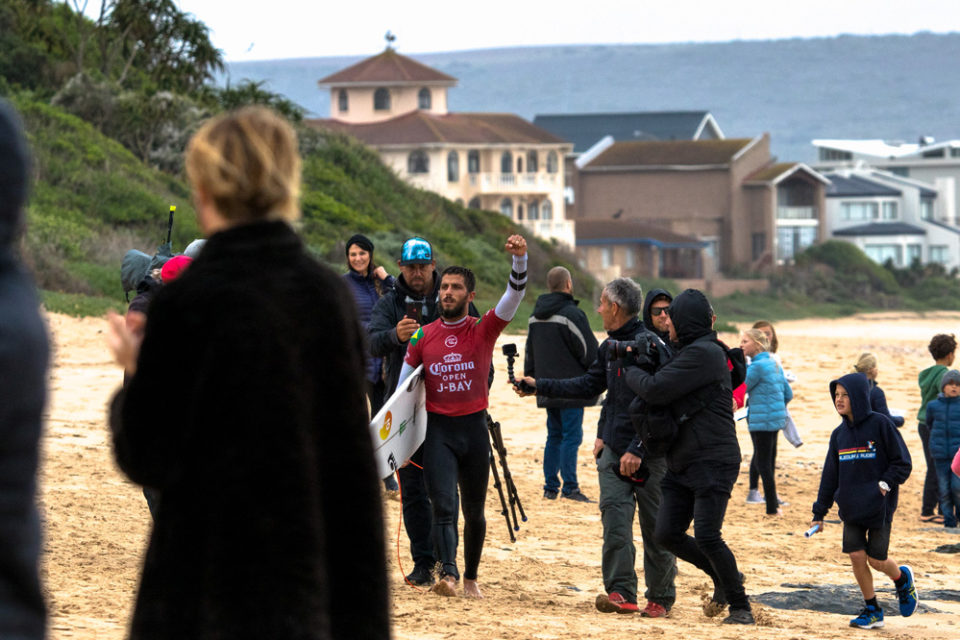 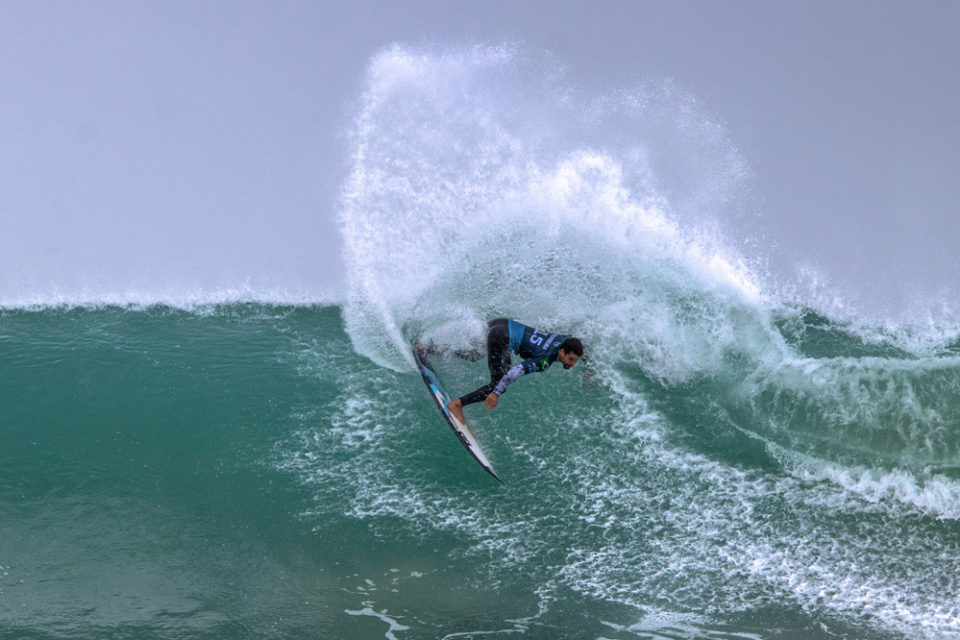 The Italian Ferrari has emerged one of the best backhand surfers out at J-Bay. 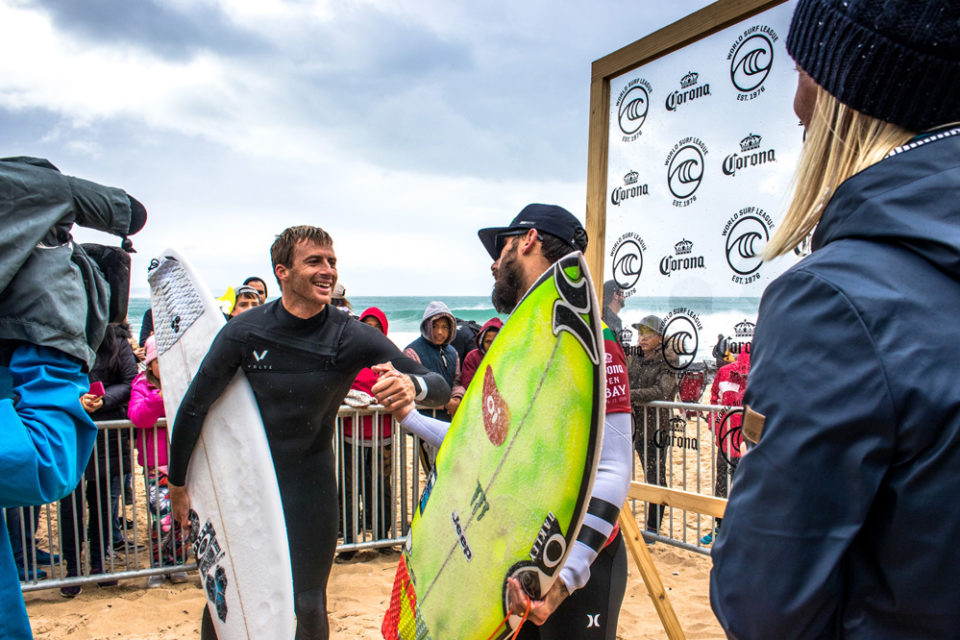 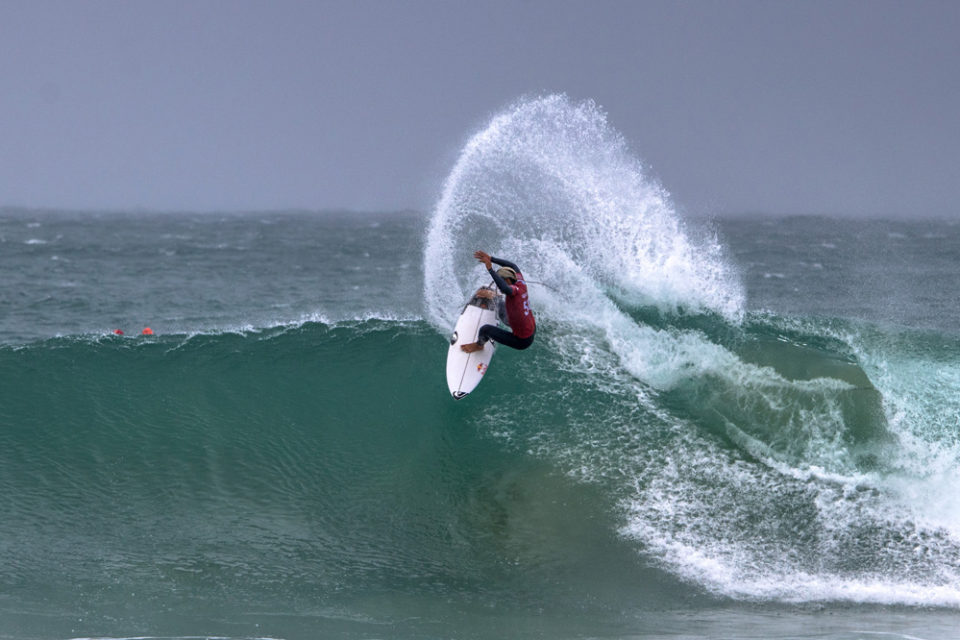 Kanoa is like the new Adrianno de Souza with more flair. 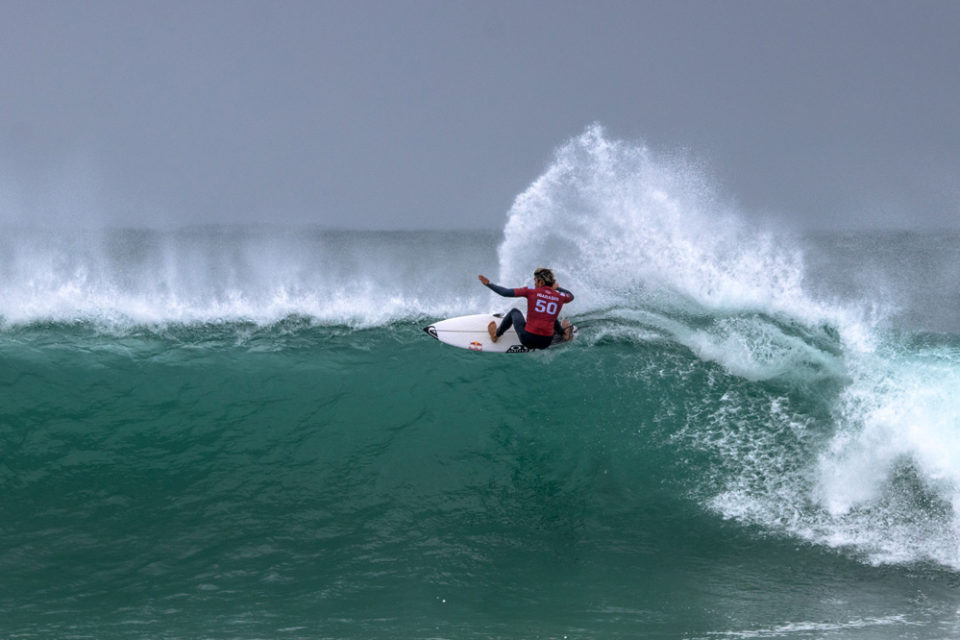 Kanoa Igarashi, on his way to being a NBA star. 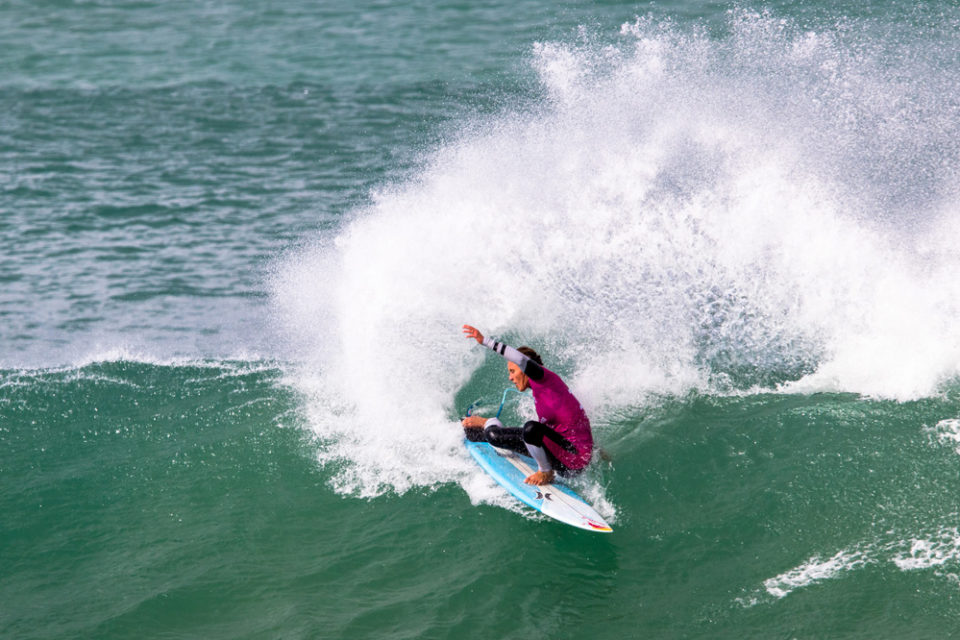 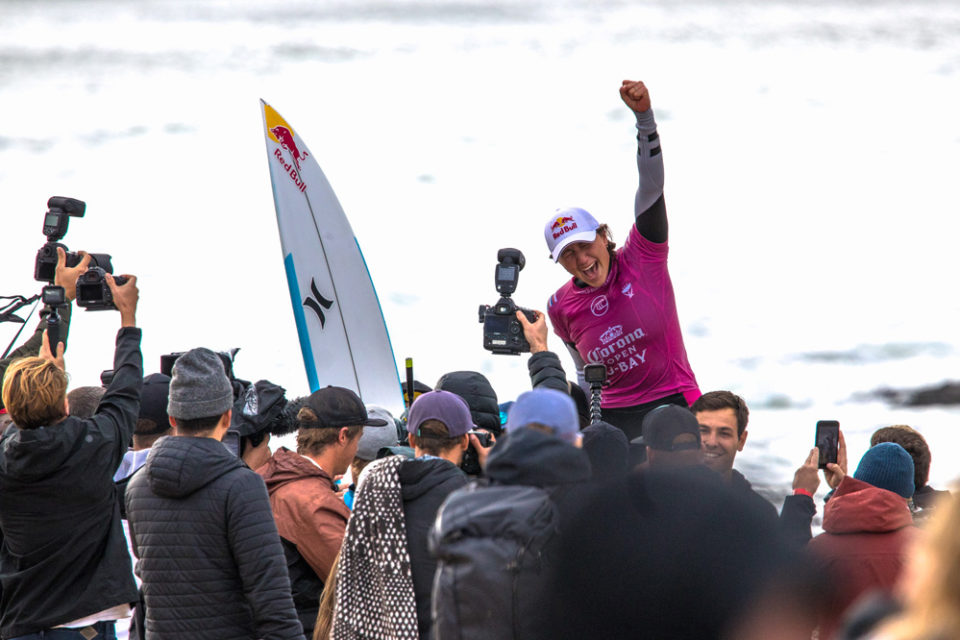 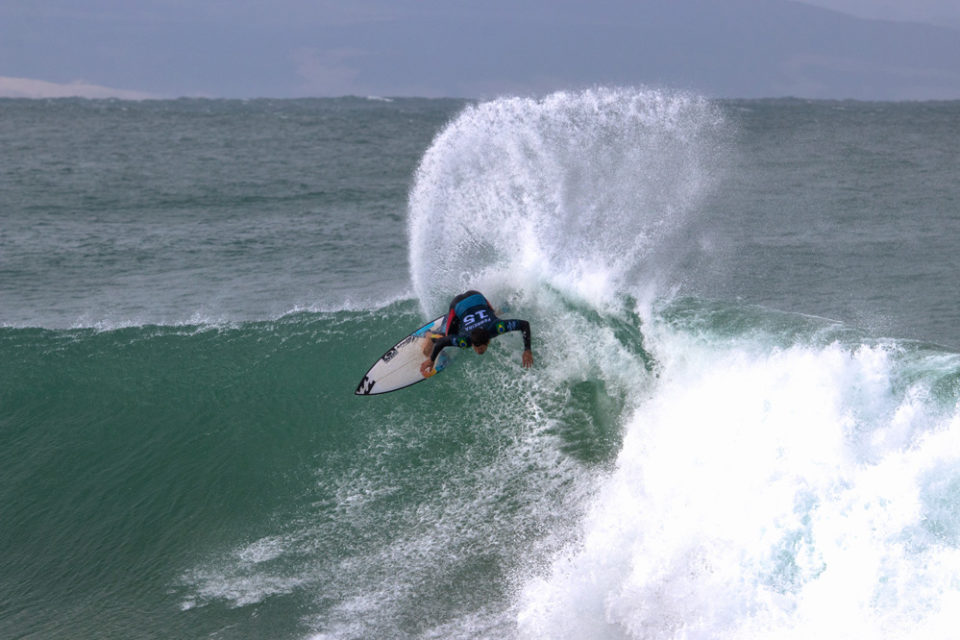 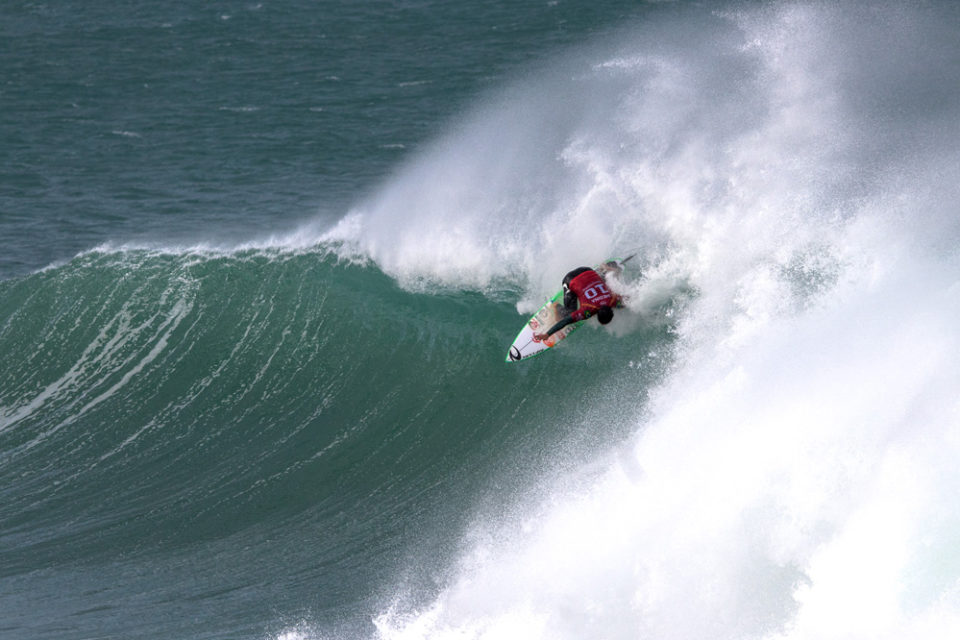 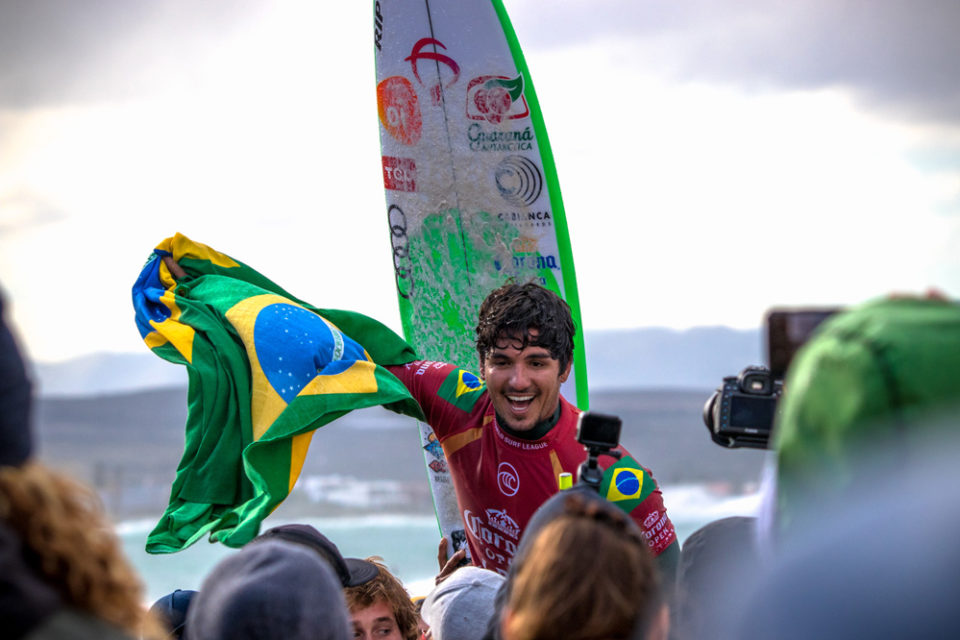 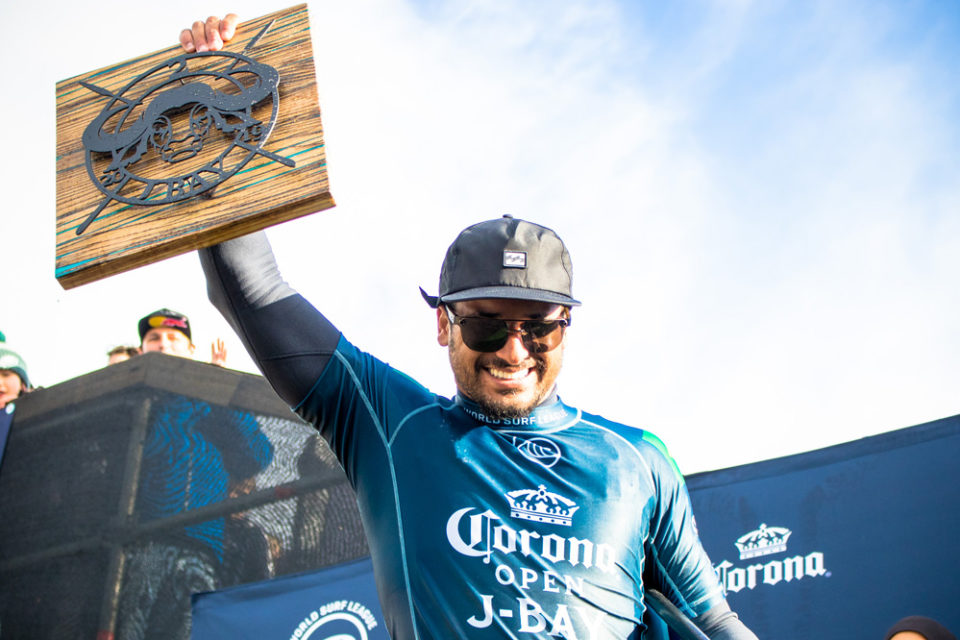 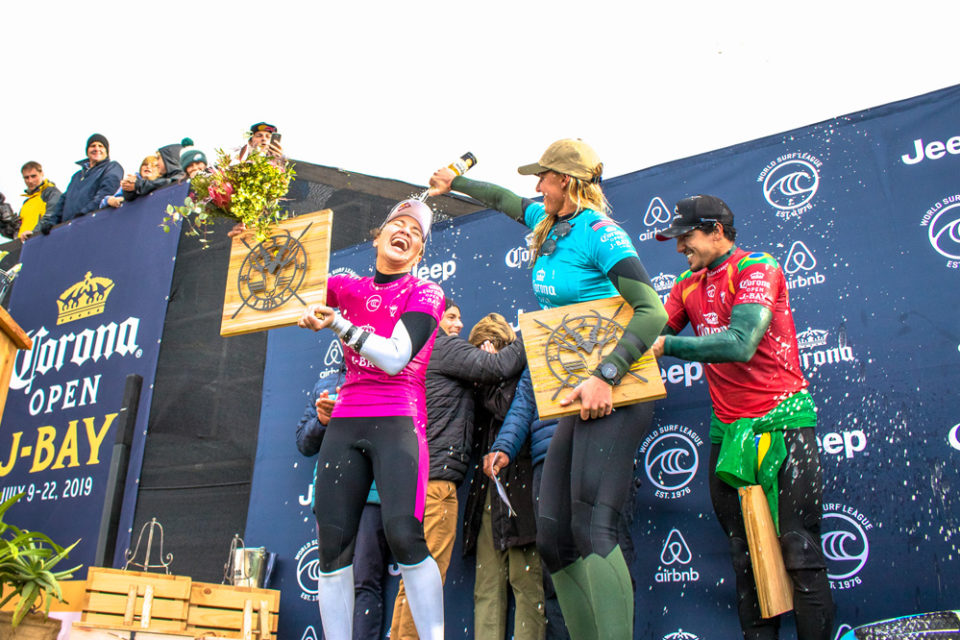 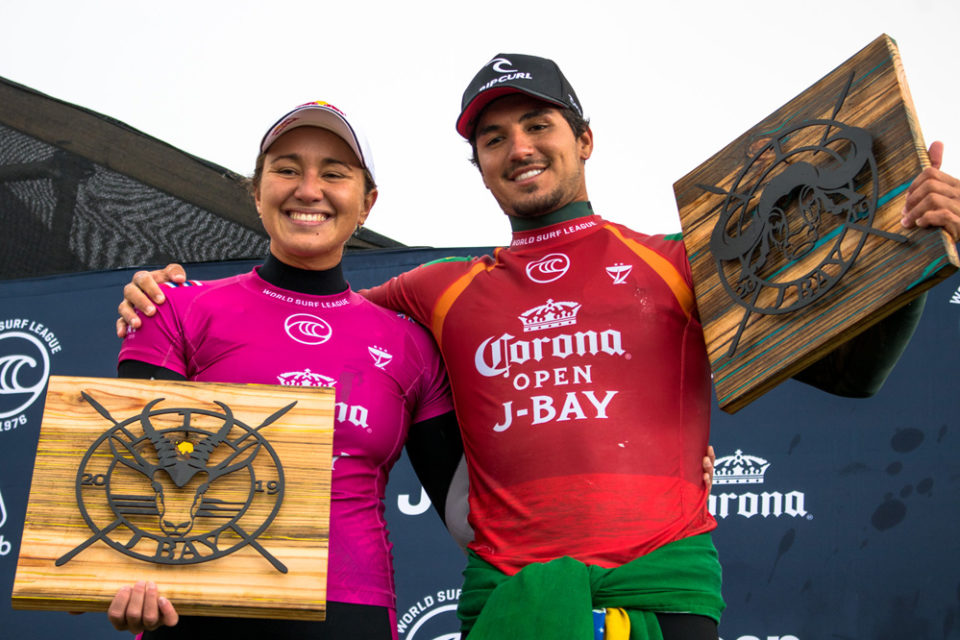