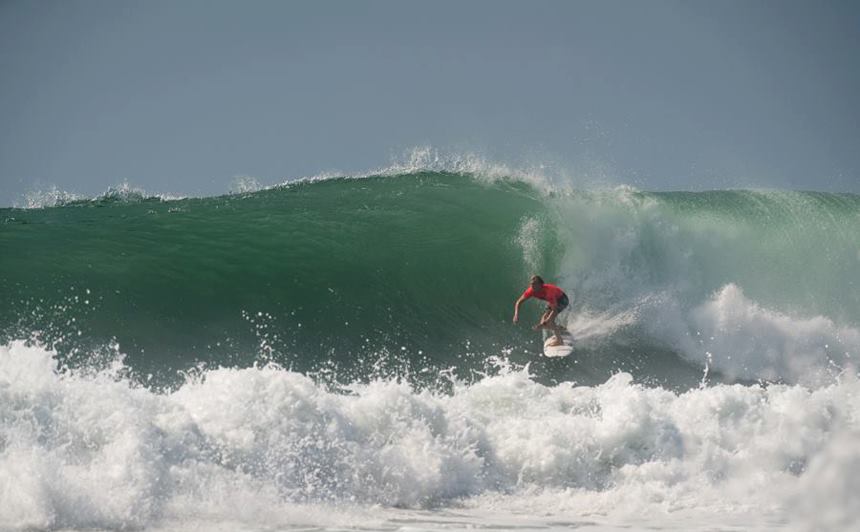 ISA World Surfing Games Round Up

Although this is a first World Games for de Vries, his many years of contest experience and solid ranking on the WSL Qualifying Series tour earned him a call-up to the side. Nineteen-year-old Masencamp has won five caps for the South African Junior Team and had a really strong City Surf Series making him an easy selection into the 2018 side while Davey Van Zyl’s experience and great contest acumen made his inclusion in the team easy for the selectors.

All the South African Men made it through the first round of competition with a 1st next to their name. Beyrick with an impressive show in the first round winning his heat 10 points clear of 2nd place was unable to make it through the second round of competition being forced to pick it up later in the repo rounds. Next to exit the main rounds was Davey Van Zyl who after two back to back heat wins placed 4th in round 3. The youngest of the lot Adin Masencamp proved to be the most resilient until he was knocked out in round 4 after placing 3rd.

All was not lost for the South African Men’s contingent, as they were to do battle once more in the repechage rounds. Beyrick came out guns blazing claiming three impressive and successive heat wins before narrowly loosing out in round 5 where he placed 3rd. Masencamp would be the next of the three to take a knee in round 7 after placing 4th in what were difficult surfing conditions.

And then there was Davey, the last man standing, who would enter the comp once more at repechage round 4. With a more cautious approach, Davey would place 2nd in both round 4 and 5 before bagging back to back heat wins through round 6 and 7. In a scrappy round 8 clash he would emerge on the better half of the heat where he placed 2nd, unfortunately, the next round would claim the last SA Men’s scalp where DVZ would fail to place higher than 4th. Overall Davey took 2nd place on ‘Podium 2’. All in all a great effort was shown by the lads in the green and gold making everyone back home proud.

The women’s side of competition would shake up in an almost equal fashion, where competitors would have to grind it out in difficult conditions following an epic typhoon swell on day 1. Buitendag an acknowledged WSL Championship Tour campaigner has not only made a name for herself as a fearsome competitor in the water but is also a role model with a heart of gold ready and able to shape the younger generation, no doubt serving as a great mentor for young Zoe Steyn and Nicole Pallet.

Pallet earned her call-up after an impressive set of results in the 2018 City Surf Series which saw her move up the rankings on the WSL Qualifying Series and this resulted in a wild card slot at the J Bay Open in July. Zoe Steyn underlined her selection when she won the 2018 South African Women’s Championship a month ago at the Mercedes-Benz SA Championships hosted by Buffalo City.

The conditions and pressure may have been a little too overwhelming for 14-year-old Zoe Steyn as she was only able to muster a 3rd place finish in her first heat. Nicole pallet opened up her account with an impressive 2nd place finish in her first heat following it up with another 2nd in round 2. The pendulum of two’s would stop there as Nicole found her self-battling it out in a tough heat in round three where she placed 4th and thus was eliminated. Both Zoe and Nicole where to pick up their boards once more in the repechage rounds where both would fall short of round 5. Before being knocked out Zoe claimed an impressive heat win in round two proving she is one to watch out for in the future.

By far the most impressive of the lot was Bianca Buitendag who went on a tear from her first heat placing 1st, 1st, 2nd, 1st, and 1st. Years spent grinding and grueling it out on the CT would no doubt have leaned in her favour, as when it comes to pressure experience outweighs everything. One more round stands between Buitendag and the final. The round 6 clash will require maximum effort from the Saffa as she goes head to head against experienced Sally Fitzgibbons, Paige Hareb and Holly Wawn.