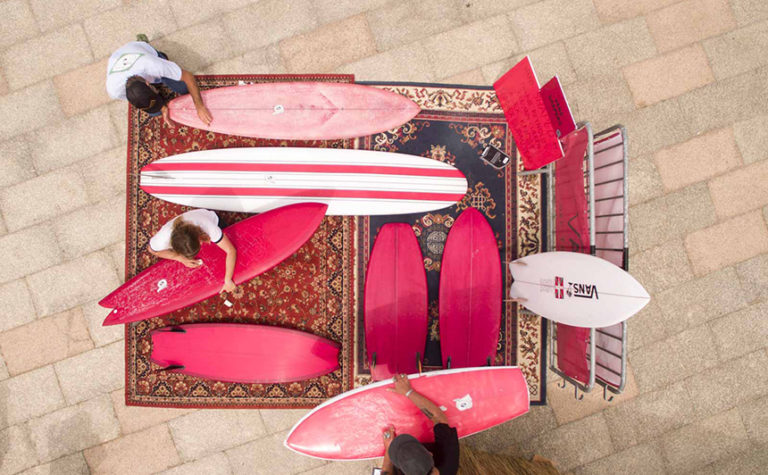 If you understand surfing as a lifestyle, more than a sport, then it can be argued that the majority of us are living it in the suburbs, working 9-5 to support two kids and a dog named Ralph. You ride a shortboard, with a squashy tail, a five fin configuration, a deckpad and a leash, while hankering for clean 5 foot waves as the ultimate canvas for your limited but enthusiastic self-expression. Somehow, we find ourselves pigeonholed into the narrow vision of competitive shortboard “progression” as the de facto surfing reality.

How did “our culture” lose sight of surfing as a rich smorgasbord of beach experiences, a rijstafel of different approaches, a whole damn rainbow-hued multiverse of ways to get your stoke on riding waves in the ocean? Instead of burgers and chips, we could be dining on little plates of serrano ham, crispy anchovies, slow-baked peppers and wild olives and washing them all down with rare cold cervezas. Mainly, and this is the important bit: “we could be having loads more fun!” Ultimately, this metaphor was spelled out as the central message of Joel Tudor’s Duct Tape Invitational presented by Vans at the Playa Zarautz in Basque country. An all too brief weekend long vista on an alternative surfing universe; where crafts are selected according to conditions, with the intention of extracting maximum pleasure. Start with this ideology, developed over many years, then flesh it out with a collection of the world’s best loggers.

The groms comprising Frenchman Nathan Sadoun (19), Californian Zack Flores (17), Floridian Saxon Wilson (17), and Nico Garcia aka “Niki Dora” (14) son of the Basque country. Then the established lords of cross-stepping: Justin Quintal, Alex Knost, Tyler Warren, Andy Nieblas and Ryan Burch amongst several other talents. Chuck in the mercurial Dane Reynolds as a brooding presence behind the scenes and a free radical in the water, add the limitless enthusiasm of Tanner Gadauskas to bring the vibe and a dash of Curren, in the form of his daughter Lee-Ann a talented muso with a sideline in shaping and surfing (with the same style cues in her DNA) to close the circle.

It’s a heavyweight line up, supported by a similar media contingent. Teams from Zigzag (naturally), Surfer, Stab, Wavelength, Surf Europe, 3 Sesenta, Surf Session and a whole bunch of young guns like Wasted Talent and Germany’s Pulk, all on hand to soak up the experience and deliver it to their audiences. Then it also functions as a kind of alt.surfing conference; a place to compare notes while being entertained and enlivened by various engagements in and out of the water; from expression sessions to skate jams in the concrete bowl, beach cleanups, design forums, live music and of course, loads of surfing all set to a soundtrack straight out of skate legend Ray Barbee’s 6 string Fender strat. 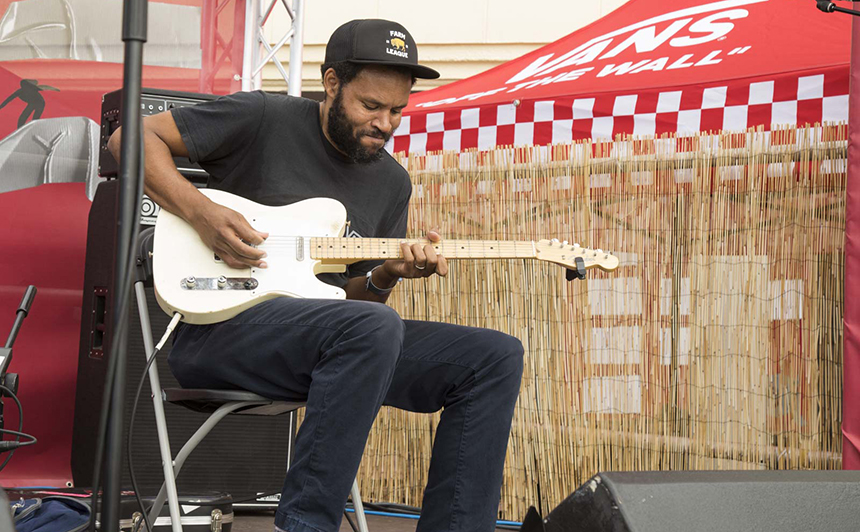 Playa Zarautz, looking North into the Bay of Biscay, is a long shallow beachie that shifts and changes so much with the tide that it seems like two entirely different places between the highs and lows. And it’s in understanding the varying alchemy of tide, swell and sand that you score the best waves. Bowls form, run, drown and re-form elsewhere on the ever-shifting banks and water levels. This is Basque country, North of Spain and South of France, where the men wear berets with no trace of irony, they feed their ham acorns so we can eat pinxos (not tapas, but same-same) and wash them down with a sour local cider that gets you on faster than the opening chords of Bruce Springsteen’s “I’m going down”. What a life. Home of Pukas surfboards, Aritz Aranburu, Kepa Acero and the perfect looping lefts of Mundaka, just around the corner. 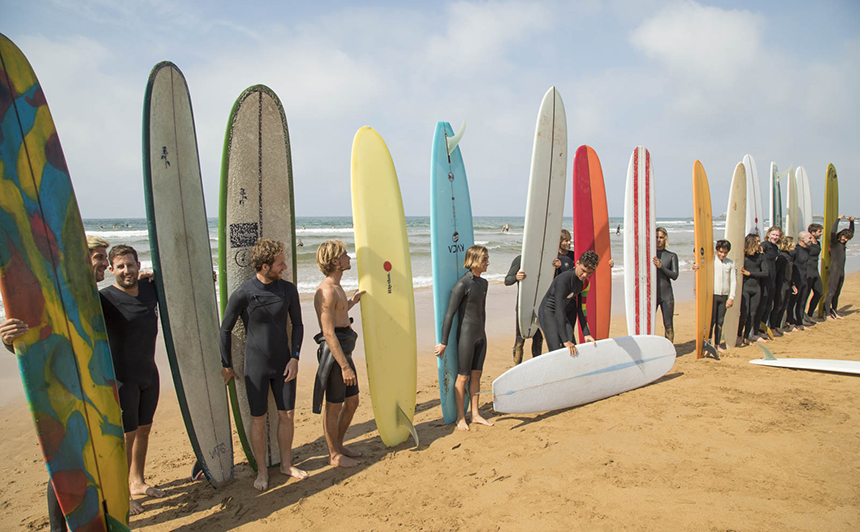 Perhaps the most compelling opportunity of the Vans Duct Tape Invitational was the collection of hand-shaped surfboards produced by Dane Reynolds, Alex Knost, Lee-Ann Curren and Tanner Gadauskas as a kind of tribute to the region. Anyone could come up to the magic carpet, where the boards lay and ask to borrow one for a quick shred out front. Pearls for the swine. Over the course of the weekend I got to impose my kooky styles on a log and a 7 foot single fin from the hands of the inimitable Alex Knost (both boards float and glide beautifully), an ironing board type diamond tail whip (sans leash) from Tanner Gudang (tons of speed down the line), a twinny-fish thing from Dane Reynolds (super loose in the juice) and a few weird batwing things I never got round to surfing. 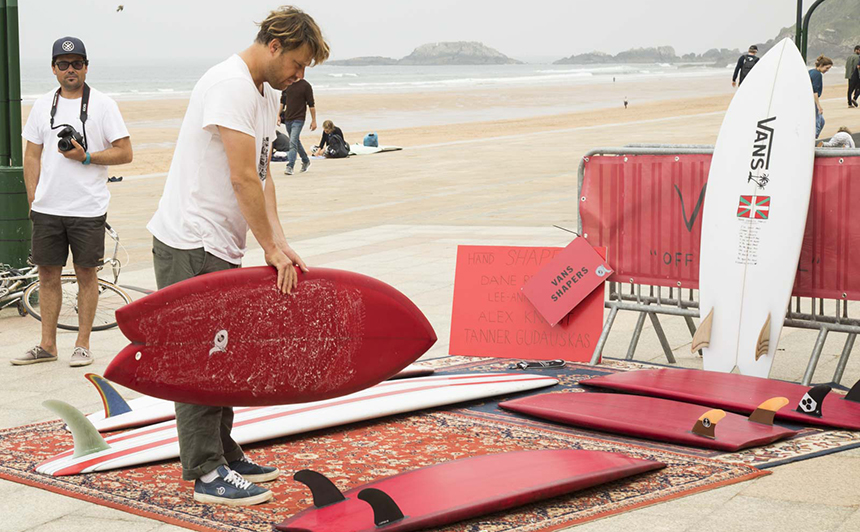 “Contests are becoming more and more removed.” We eavesdropped on Joel telling Stab. “You have to connect with people in person.”

Then there’s Alex Knost. Good lord what a beautiful freak. I remember another Stab article, demanding whether Knost was a skilled imitator or an actual innovator. Well having spent a little time watching the antics of the Costa Mesa blonde, I can confirm that when Alex Kno-o-o-ost (as he pronounces it himself) gets on that surfboard, he’s got all the old tunes down and he has introduced a whole bunch of his own original dance moves. It’s a poetry in motion kind of thing, unpredictable and inspiring. It’s hard to believe that he’s already an elder-statesman (rocking into his 30s) of the Seedling / Sprout defined-movement. Better yet, Alex Knost rides his eccentricity like a knight on a big white horse! Bold and unashamed, with a straight back and a steely eye, right at the front of the parade. A wonderful freak in and out of the water. 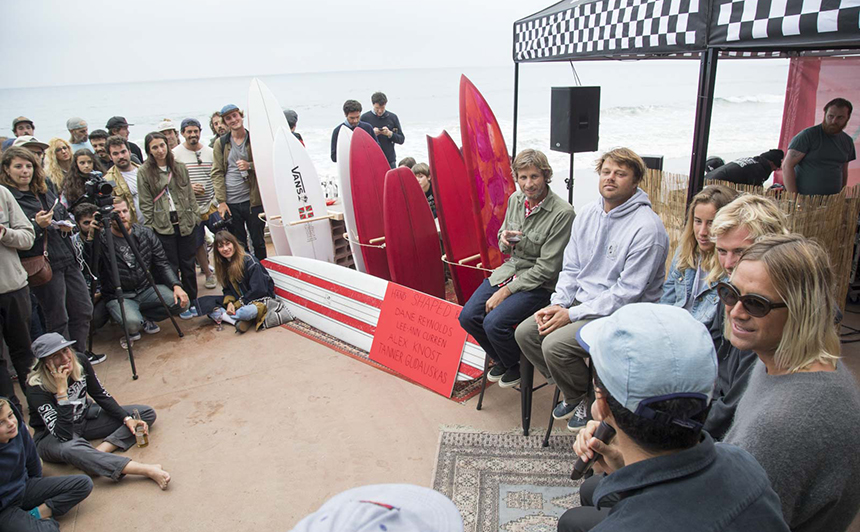 At the design forum, sitting on bar stools alongside Joel, Dane, Lee-Ann and Tanner; Alex is singing out his answers like Frank Sinatra while swilling a big glass of red, like a surfing savant. Surfing as a concept, needs more like Knost. “Al fucked things up. In a good way.” Says Joel. “He’s the most copied surfer in surfing. All the fucking hipster Aussies in their shitty bands, all mini Knosts! His sphere of influence is amazing.” That influence is present in the water here too, with just as many weekend warriors riding single fin mid-lengths, polished logs and strange asymetrical quads as your standard CI thrusters. “Some of these kids [from the Duct Tape] are buying houses.” Says Joel on behalf of the movement he helped bequeath. 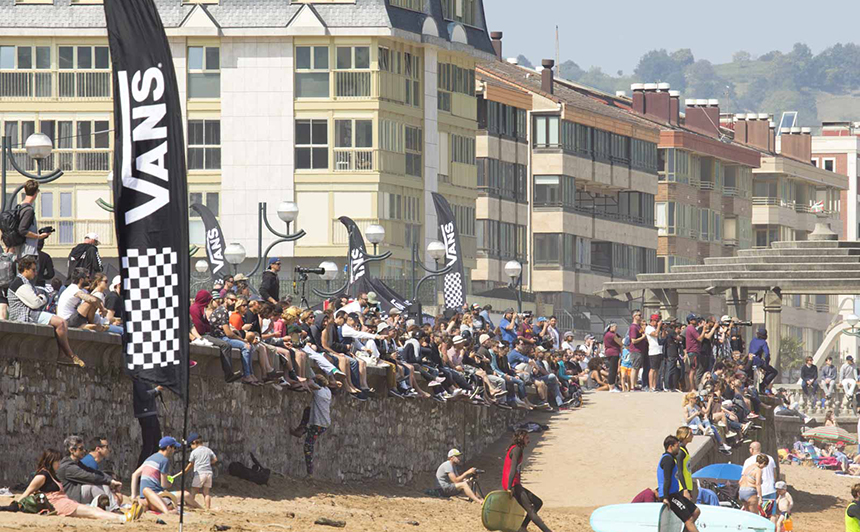 “We’ve built a platform where brands could pay attention to them, and started to pay them. And that, to me, is a huge accomplishment. We’re still tied to the culture. It connects with people. We’re building boards, we’re living in cars so we can surf, it’s the image that built this. You want to bring it places and have it infect the area. The other side is guys throwing medicine balls against the wall, getting yelled at by coaches, surfing the exact same boards, surfing the exact same way… It’s fucking jock. We let pro surfing get modeled after fucking golf. And not talking shit, but there’s no originality.”

Running the schedule more as a guideline than a timeline, you could feel the cool hand of Tudor guiding procedures like subtle jiu-jitsu, pulling strings, making the tough calls that turned out good. A free surf amongst the locals on Friday afternoon to break the ice, some fine tunes in the sun and then the shaping forum at dusk. On Saturday the beach clean up, expression session, skate jam and more Ray Barbee down at the Pukas shop. Holding off starting the event for the whole of Saturday, regardless of contestable waist-high conditions, just to allow a long period swell to fill in on the Sunday.

Finally, Joel sent the surfers out on the morning mid-tide in pulsing overhead waves before going on hold through the low and only running the finals late in the afternoon, in optimal waves. The sun only sets at around 10 in Spainish summertime; and  the final paddled out at about 7 pm. “Who says a surf event has to finish at 5 pm?!” Shouted Joel over the loudspeaker. Despite the spontaneity of Knost and the steady workmanship of Tyler Warren, it was Orange County’s first nation loggin’ sensation, Andy Nieblas who won the day with a mix of originality, flair, showmanship and unerring precision on the log. He basically danced his way to the beach repeatedly and surfed like an easy smile. Not that he wasn’t hard pressed by the field. Tudor had to take the judging to 3 waves in order to separate the top 3.

Needless to say, the quality on display was higher grade. And as the gloam set in on our last night in Basque country, the alt.surfing fest drawing to a neat conclusion, satisfied surf fans drifting back to their vans to contemplate Monday’s return to drudgery… And us, the special ones, whisked off to a local wine farm to celebrate around long tables of food and drink, this rather unique surfing excursion. On the continuum between needs and wants, Duct Tape checks all the boxes.

Ultimately if there’s meaning, or a lesson to take from 4 days of lounging in the sun, surfing and eating pinxos in far flung ancient lands, it’s that surfing needs to take itself less seriously and get back to having more fun and just enjoying the time we spend in the ocean. Like a zealous new pilgrim marching up the old Camino trail, I’ll see all you wonderful freaks next year!