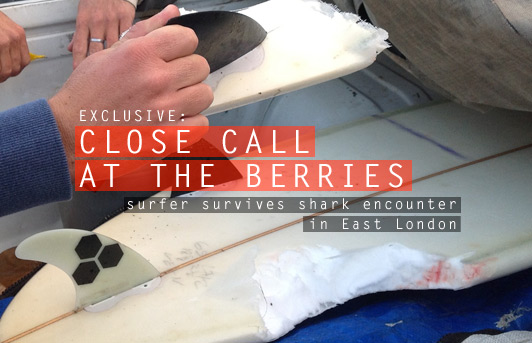 This past Sunday Zag posted an unconfirmed report of a shark encounter at Queensberry Bay in East London. The report suggested that it was the surfer’s board that took the brunt of the encounter, and that the surfer suffered ‘a grazed thigh’.

And while the first part of that report was indeed true, what were reported as grazes, were in fact the puncture wounds of the shark’s pointy teeth. It was a really close call, and perhaps the only thing separating the surfer from further damage, was the fin of his board that’s now seen better days. 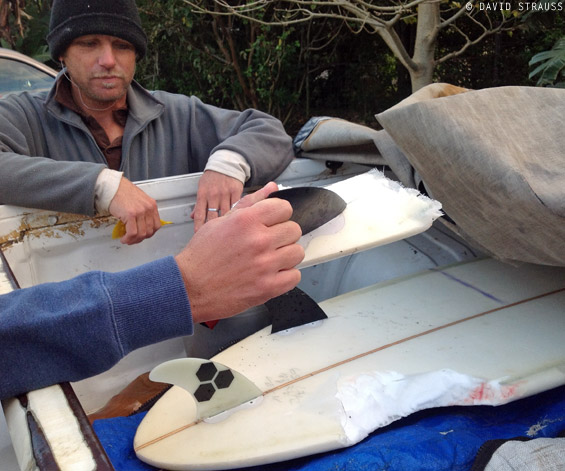 Lucky to be alive: surfer Greg Emslie holds up the mangled fin while a visibly shocked Kevin Bracey thinks about his narrow brush with death.

An East London surfer is lucky to be alive after a shark bit a huge chunk out of his board at Queensberry Bay.

Kevin Bracey suffered minor lacerations around his knee when the shark bit him while he was paddling out with a friend, Dave Boatwright, for an early surf on Sunday morning.

Marine experts yesterday warned surfers and bathers to be cautious when entering the water along the East Coast after reports of bird, shark and other marine activity associated with the annual sardine run to KwaZulu-Natal.

According to Boatwright, the two were paddling out a few metres apart when he noticed a “big swirl” in the water before Bracey shouted out that he thought he had been bitten on the leg by a shark.

“It all happened so quickly, one minute we were paddling out, the next Kevin said he thought he had been chowed (bitten),” Boatwright explained.

“Everything was going on in slow motion… Kevin’s face was white when he realised the fin of his board saved him from getting his leg bitten off.”

Boatwright said one of the three fins on Bracey’s board prevented the shark from clamping down on his leg – and potentially severing an artery.

“The fin saved his leg from serious damage, it was like putting a stick in a crocodile’s mouth to stop it biting closed.”

Boatwright and a bleeding Bracey caught a wave to shore fearing the worst.

“He was very lucky, he had a few nicks around his knee and a huge chunk out of his board.” 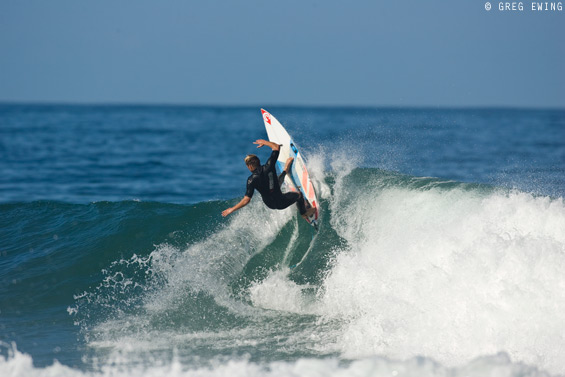 Former Dream Tour competitor Greg Emslie had a close encounter of his own at Queensberry Bay in 2010. He’s also smashed more than a few lips at the fun point.

Local surfer and former world tour campaigner Greg Emslie – who arrived soon after the attack – said both guys were white as a sheet, shivering on the beach when he got there.

“It was a very close one, they were very shaken up by the incident.”

Emslie said the scary part was that they did not realise there was a shark about – until it bit the board.

Emslie and fellow professional Roseanne Hodge had a close call at Queensberry two years ago when a shark buzzed them in the line-up.

Although conditions did not look sharky initially, Emslie said on closer inspection the sea appeared “alive” with activity.

“I sat and watched for an hour and saw dolphins, a seal in the line-up and a whale nearby.

“There was a lot of activity in the water and although I did not see birds at first, I later noticed lots of them far out.”

“Be aware of marine activities such as birds diving, don’t swim deep, swim on beaches with lifeguards and listen to the beach lifeguards who will also keep swimmers informed.”

She said the signs of sardine run activity had been spotted in the area recently and urged water users to be cautious in the weeks to come.