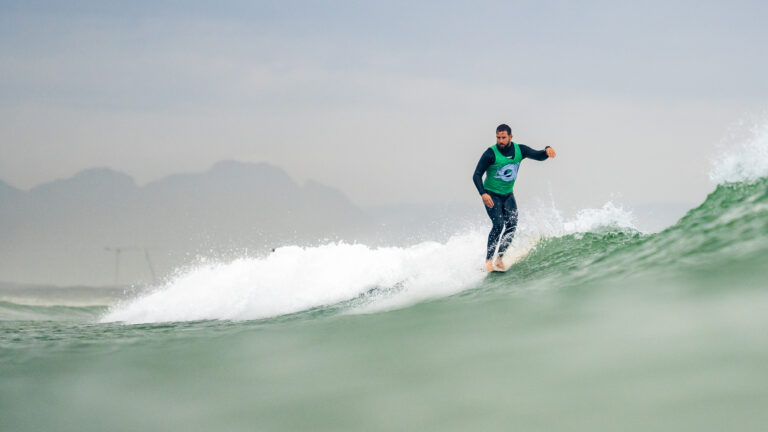 Beyond the unique approach to surfing and format innovations, it is rare when an event makes all the jaded surf hacks (and indeed most everyone else who attends) question the things we have always taken for granted about surfing and surf events. If Duct Tape has a message for the surfing status quo, it’s this classic Joel Tudor riff: “Don’t take yourself so fucking seriously. You can still have fun at the same time as being a competitive athlete. It’s not so regimented. You don’t need medicine balls and dudes carrying your boards. That’s just a little over the top.”

As far as logging events go, Duct Tape is the gold standard. Its impact in purely logging terms has influenced the WSL to move their own longboard judging criteria away from the shortboard-esque manoeuvres that typified the code in the 90s and noughties and back to classic single-fin logging; criteria that Tudor, the reigning world champ at 46 years old, believes best compliments, rewards and evolves the tradition. The irony is not lost, that while the next Duct Tape takes place as part of the upcoming Vans US Open of Surfing event at Huntington Beach, Joel Tudor remains suspended from the WSL and unable to attend his own event, for his outpsoken “code of conduct violations”. 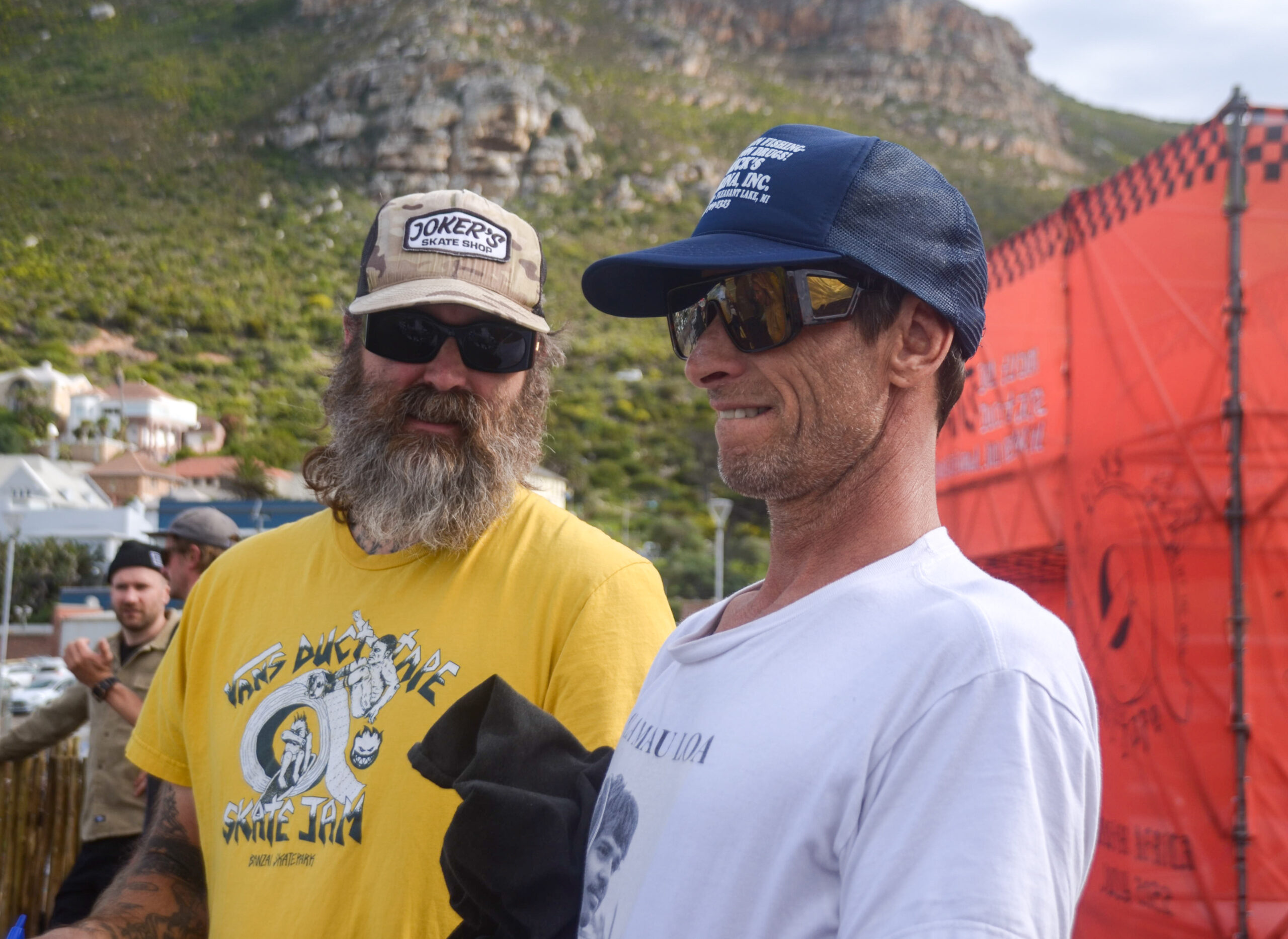 But Joel Tudor’s ongoing spat with WSL just brings more attention to what he’s been saying all along. And helps to cement his maverick reputation. For while Duct Tape assembles and showcases the world’s finest loggers on a succession of shores around the world, it’s far more than just a longboard surf event. It is an attempt at surf cultural course-correction. It is a reminder that surfing is fun and elements of our rebel culture should be embraced, not erased. Or as Joel says: “It’s a contest, you can take it seriously without being a dick.”

At Duct Tape, in the water, there is no priority. Surfers are actively encouraged (with cash incentives) to share waves and ride them well together. “That kind of free environment produces better surfing than a bunch of strict rules. No one likes rules, especially when you’re surfing.”

In essence, Duct Tapes aim to embrace the loose, rebel spirit of club surf contests from the 60s and 70s, where the tribe showed up, camped out in beach parking lots, misbehaved all weekend and crowned their heroes with a few slabs of beer, from a trestle table and a megaphone.

“You got to remind people how we got here. You can’t bury the fucking roots.” Says Joel. 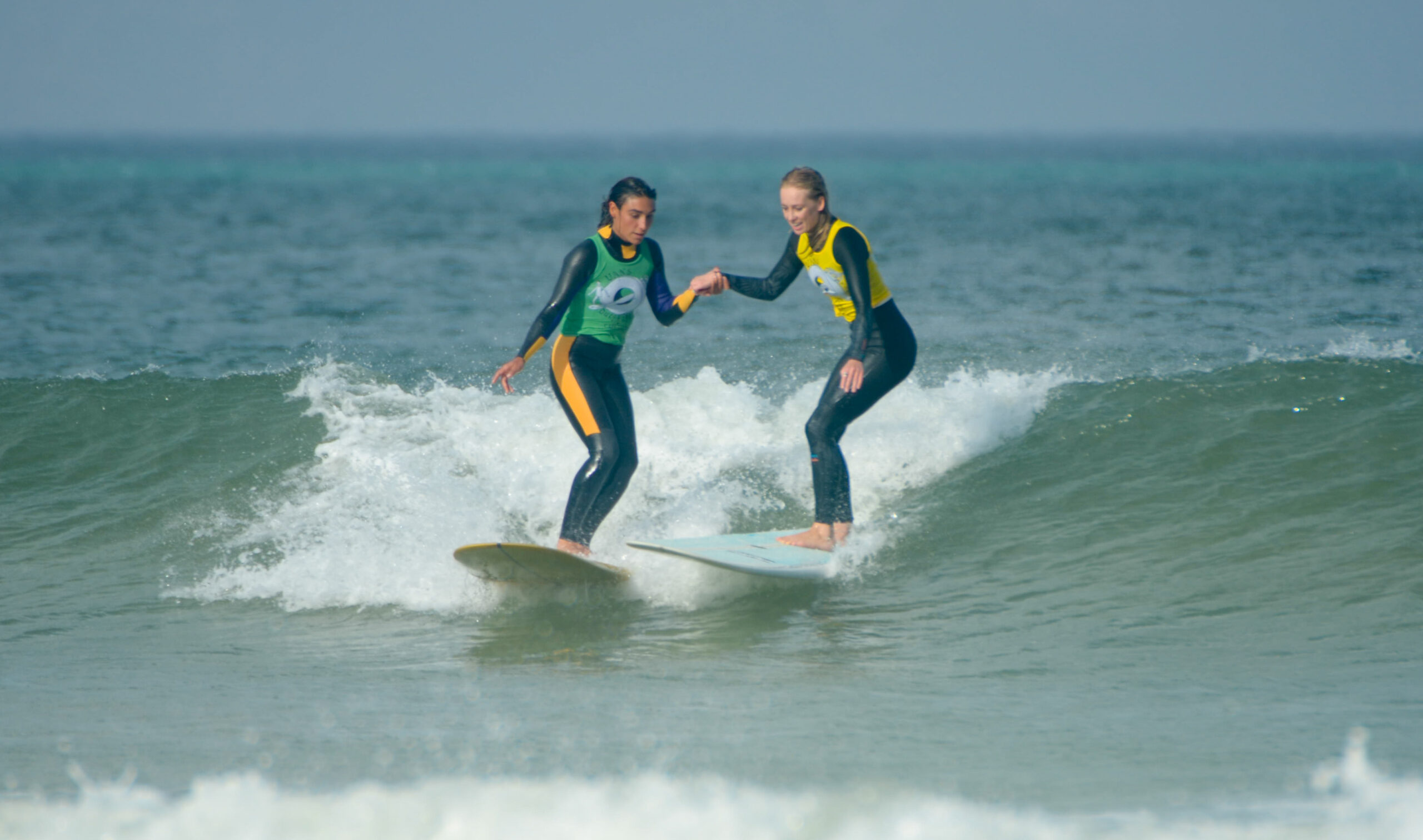 Will Duct Tape grow into its own tour, with webcast events (and hopefully some way of broadcasting the aprés-surf action too)? Will they add a fish or twinny division? How about some of these supremely talented freaks riding single fin eggs at wailing J-Bay (and a wild card for Steph Gilmore)? Like many, I’d sure like to see that.

Now I’m not calling for a coup that cancels WSL-style progressive competitive surfing, I dig that too. Events like Duct Tape show that surfing comes from a diverse, exciting and largely unexplored and under-appreciated heritage (a whole family tree of geniuses, freaks and legends, mate) but what we’re seeing as the meme of “contemporary surfing” is actually a very narrow and limited vision of our culture.

Duct Tape alone is not the answer, but it’s certainly some interesting questions. 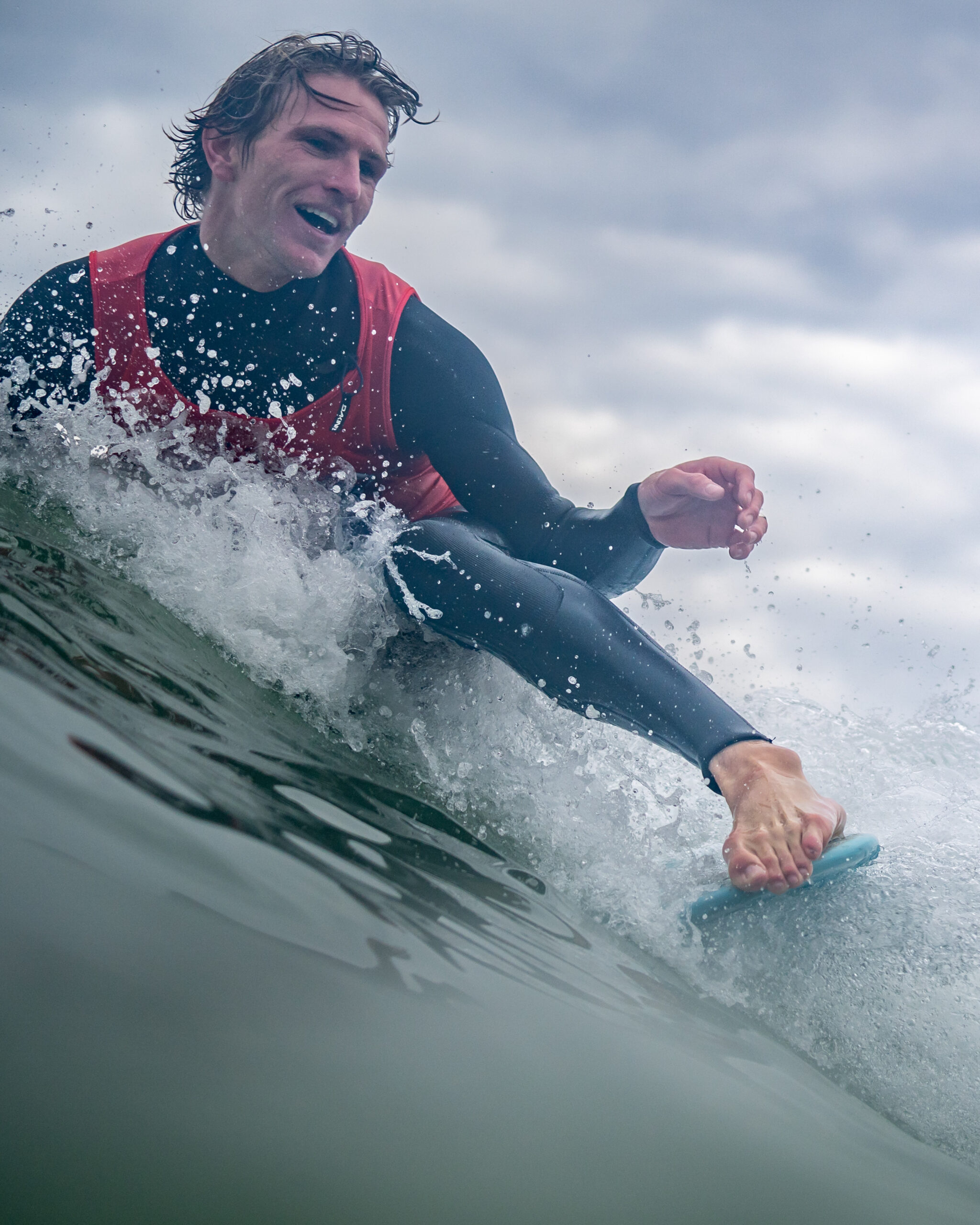 In conclusion, it’s confession time. I surf a lot more now than I used to 4 years ago. What changed? I bought myself a log after attending my first Duct Tape Invitational event in Zarautz, Spain in 2018. (See Here). Up until that moment, I’d spent my entire surfing life, strictly a shortboard man. Pointy up top, square-ish at the bottom, 3 fins and a leash. Yes I had a fish too, for small days. But that was the extent of my experimentalism. Extra vanilla! Despite working at Africa’s finest and longest running surf mag, I had big, glaring blind spots. Before that, I last rode a longboard when I was learning to surf back in 1995, and it was actually a mini-Mal with a thruster set up. Joel would call it “dad-boarding”. When I came back from the Basque Country, having had a most excellent and wildly diverse surfing experience, I called Hugh Thompson and asked him to make me a log, 9’6, heavy glass, single fin, with a red resin tint. “A forever board”, he said. That sounded like the thing. “Yes!” I answered. That red log has taken nothing away from my surfing, it has only added more hours and new dimensions to the thing I love to do. And like every surfing discipline, it’ll take you down a technical, never-ending wormhole of slow and incremental improvements, to do it properly.

Maybe us surf-ballies are more susceptible to these gentle cultural nudges. Or maybe we’re just getting old and sentimental. But I am not alone. Just like me in 2018, Steve Pike from Wavescape, fresh from his first Duct Tape experience in Muizenberg, went straight and purchased a log. He was last seen in J-Bay, not hustling for scraps along the inside rockline at Supers, but connecting the flow on 9 feet of fibreglass down at Kitchen Windows. 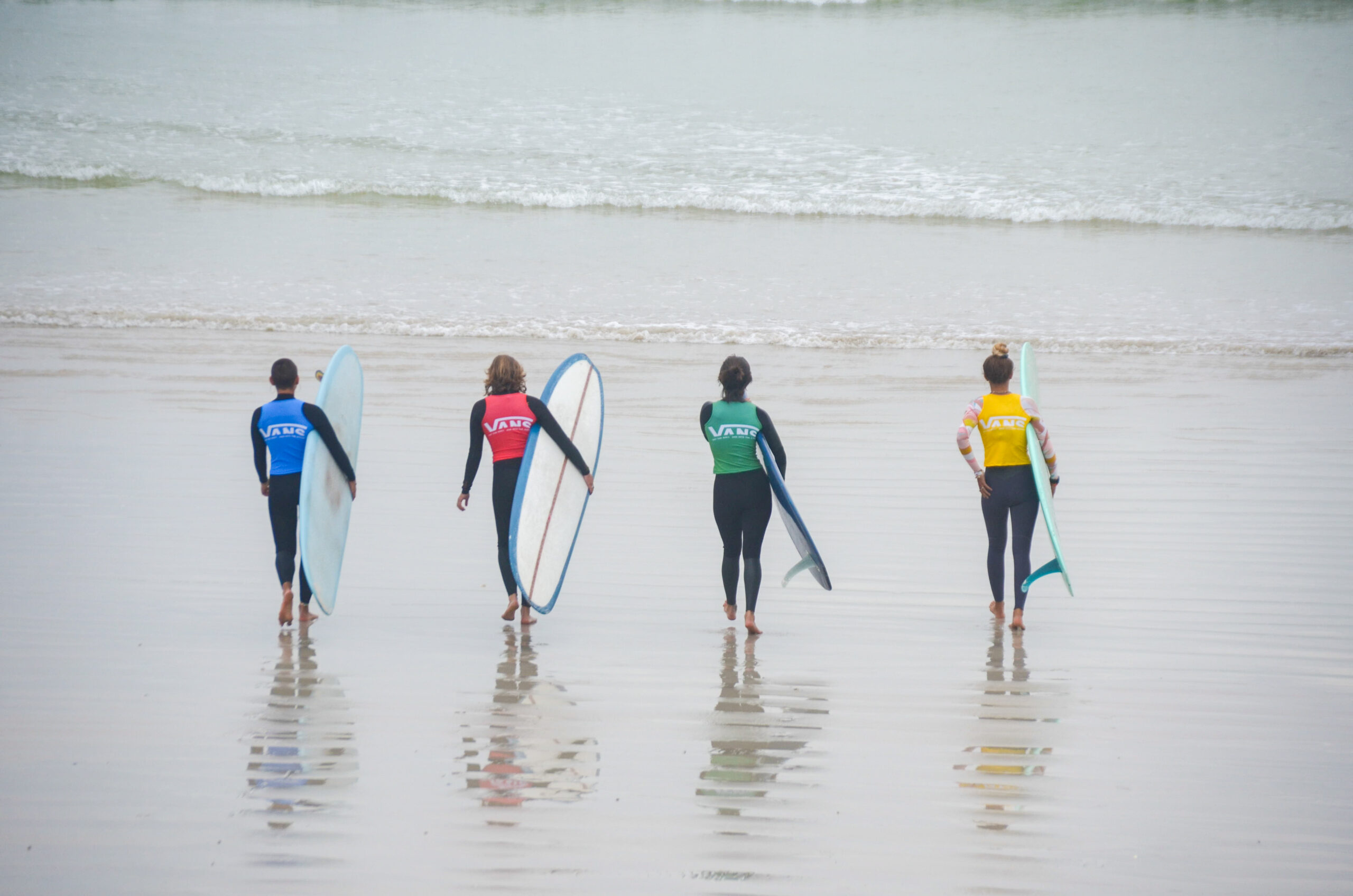