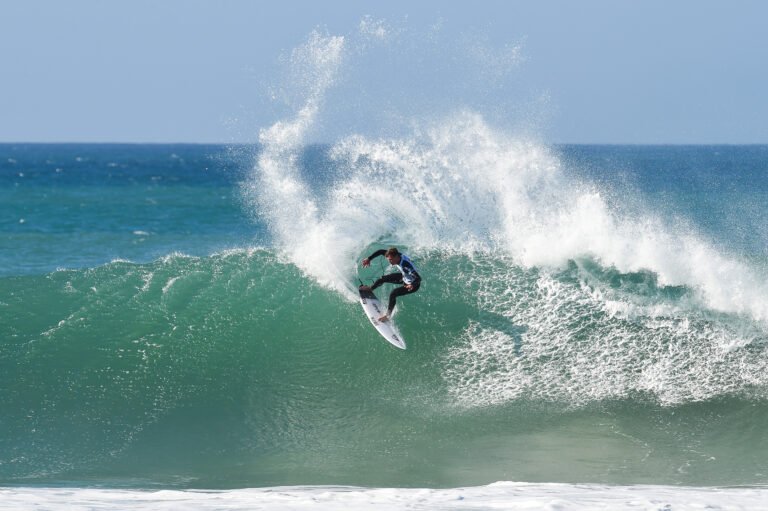 The last time we enjoyed the Corona Open J-bay was in 2019. That was three years ago my (wo)man. Three years since we’ve enjoyed the magic of J-Bay. Let’s be honest right now. Let’s have a moment of honesty. Today was the best day of competition the championship tour has seen since the Banzai. The WSL has dragged us from one average event to the next and finally… finally, Africa has delivered!

Day One of the Corona Open J-Bay and Supertubes lit up like a Christmas tree garnished with a plethora of neatly wrapped pressies. The sun pierced the horizon and Trav Logie was on it like a one of those annoying early risers: he didn’t let one ray go astray before sounding the horn and calling the surfing ON! As if the fresh early morning North Westerly wasn’t enough to let you know you were in Africa’s surfing mecca, the school of dolphins that surfed a couple waves in Heat Two sealed the deal.

It’s J-Bay baby! The world’s best righthand point break! Give us your hand in marriage and let the Zag guide you through the opening day of competition. 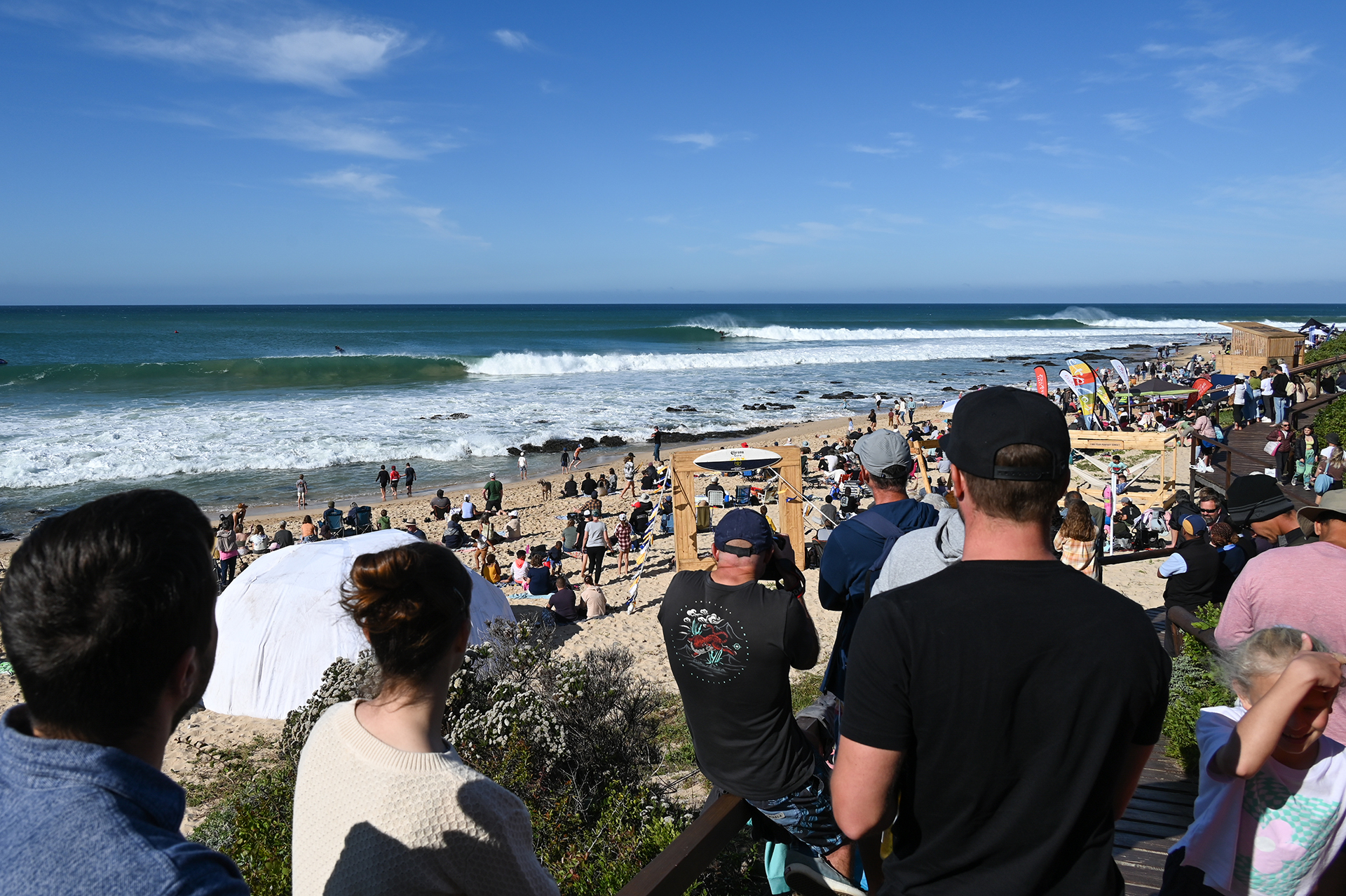 Supertubes in the north-westerly is like meeting a really good looking man/woman in [insert your place of choice], only to discover that he/she has a horrible personality. Like maybe a narcissist. You know how narcissists love to spew out their opinions? They present the, in such a way that there’s not a chance in all hell they’ll ever be wrong. They’re so positively convinced of their own voice you end up thinking, “Damn, this homie can’t be wrong.” Anyway – Supertubes in the NW is like a narcissist. It’s right. Until you surf it. Then it’s wrong. Round One of the ladies and they were introduced to good-looking Supertubes with a bad personality.

Carissa has a proficient act. She’s a tactician through and through. She surfs smart. Always. Never gung-ho. Her surfing is like a Toyota Fortuner. Every South African surfing family can relate to a Fortuner. With all the unpredictability that comes with living in South Africa, you wouldn’t want to take a risk with your vehicle. Like the Fortuner, Riss simply does everything so freakin’ well! Reliable. Stylish. Fast. Powerful. You never see Carissa take an unnecessary risk. She relies on her power, wave choice and flow to elevate her scores into the excellent range. With the early morning devil wind conjuring satanic ribs up the face – Riss parted the waters to the first excellent score of the day; 8.17 and she did it without the staff of Moses. No sweat broken. Complete control from start to finish. 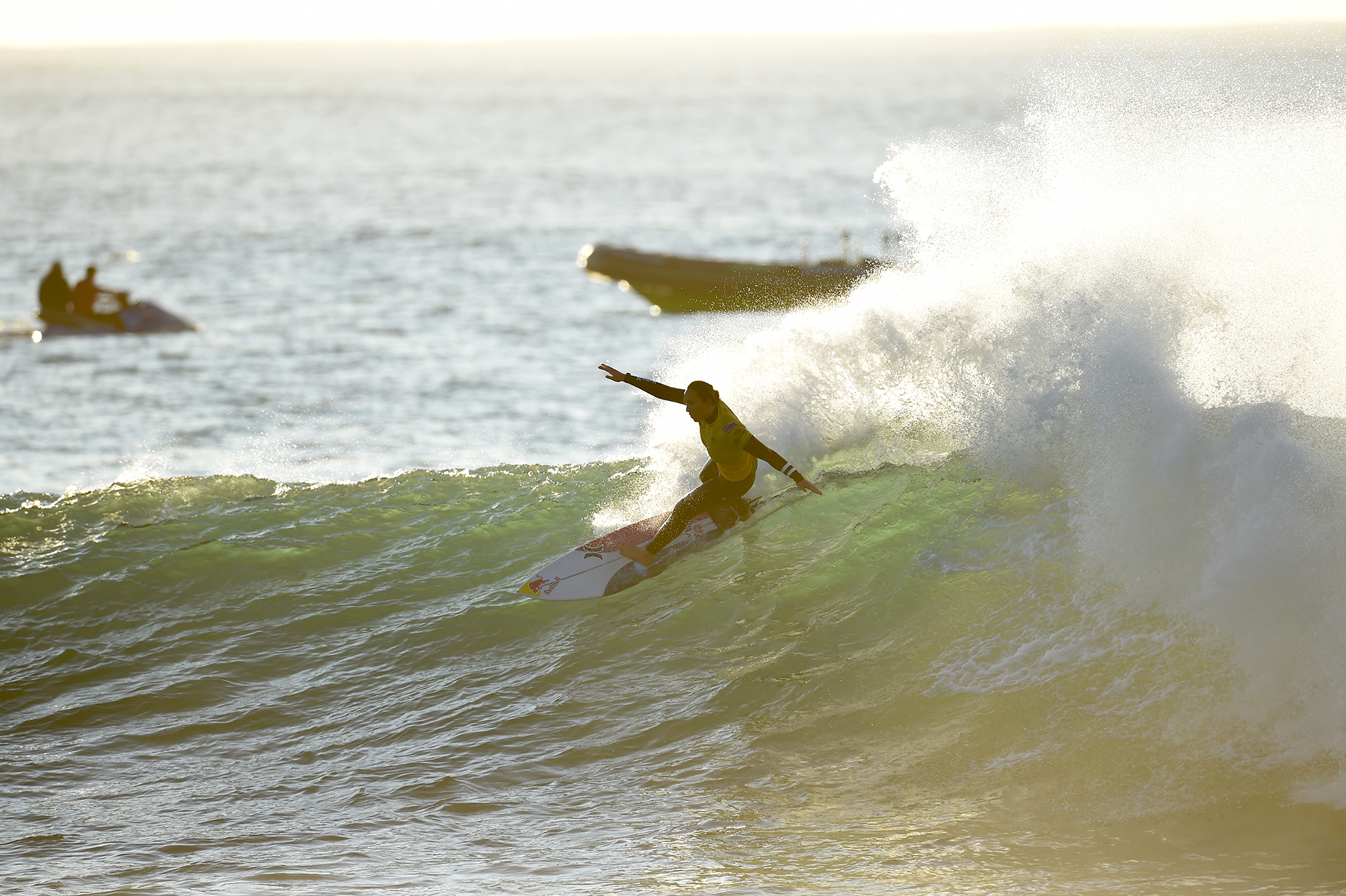 Before the event started we ran into the famous Mr. Luke Egan. Luke mentioned that he was doing a bit of coaching with Caroline Marks. And what an excellent addition to the Marks camp. Under the guidance of Egan, Marks acquired a duo off 7.33’s to dispose of Defay and Nichols. Her surfing was big, bold and dare we say, a touch rude. On her second 7.33, Caroline took off half way down the point, clobbered the wave with two filthy backhand cracks and then into a gorgeous high-line that made us feel like we’d time-travelled back to the 1984 Country Feeling Classing with Mark Occhilupo vs Richard Cram: deep bottom turns, filthy cracks and gorgeous high-lines.

As the sun rose ever higher over the corduroy lines of Supertubes, heating the land and our cold skin, like clockwork as the bell struck 10 ante meridiem, so the NW west handed the baton to the SW, sending those satanic rib faces to hell and opening up the door to an incredible day of surf. Hallelujah!!

Heat One of the mens: your boy Matt vs Griffin vs Jadson. If we could compare Matty to an automobile it would most certainly be a scrambler. High revs, always unpredictable, gritty and can take on any form of terra firma. Matt’s style of surfing is as relevant as it’s ever been. The people want dirty, they want unpredictable, they want power and Matt ticks all those boxes. He goes high-risk all the time, every time. You never quite know how he’s going to approach a wave. It’s like listening to Trump speak. Who knows what creative things that guy’s tongue will deliver us. But unlike Trump we thoroughly enjoy every manoeuvre he completes. Matt makes last-minute split-second instinctual decisions that somehow work out more times than they don’t. He keeps us on our toes as much as he does the judges and that’s why they don’t mind dispatching big scores his way. Matt took down one of the most in form surfers on tour right now (Griffin Colapinto) and he did it in his stride. 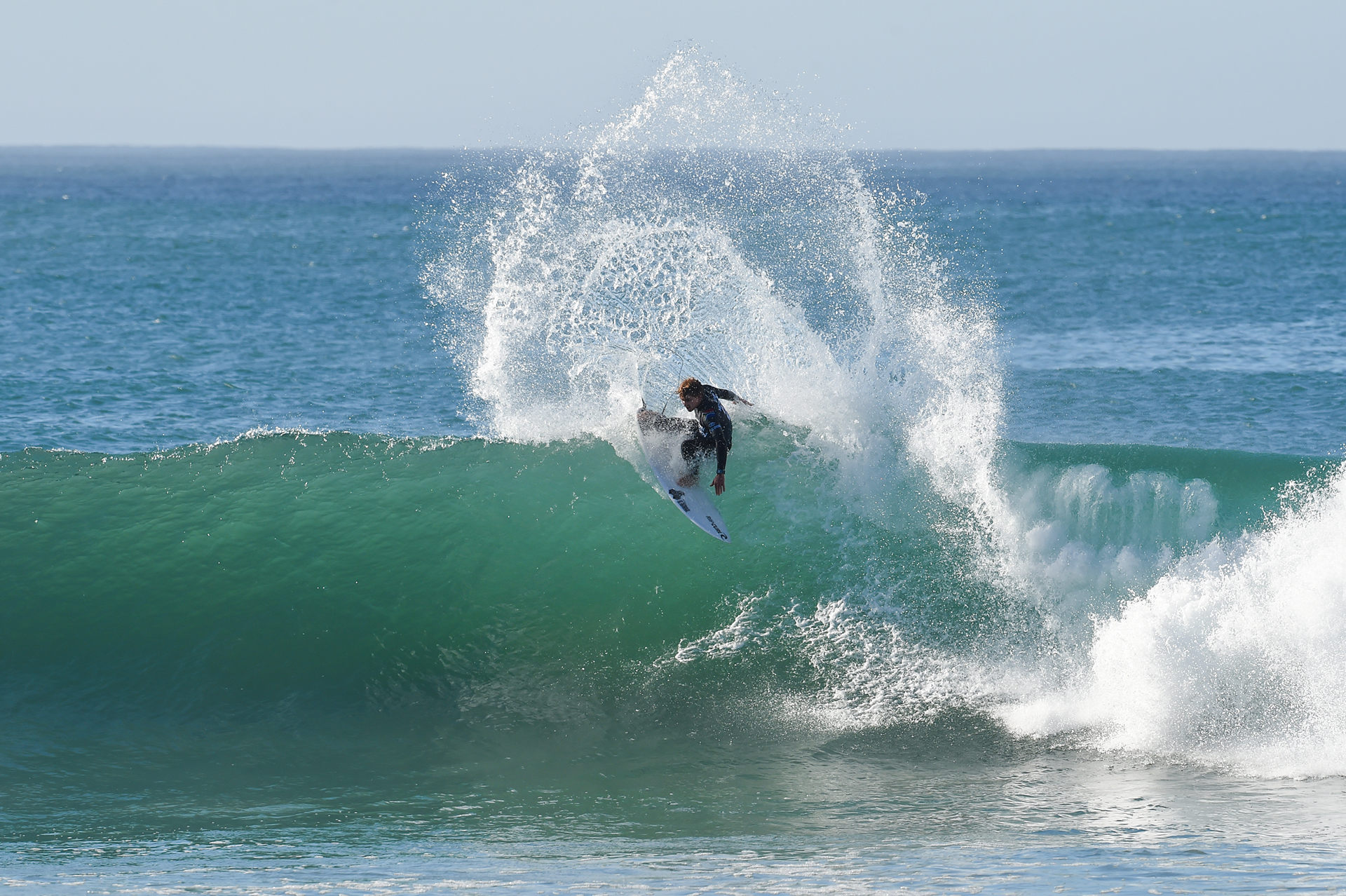 We enjoyed a delightful surf with Yago Dora and Jack Robinson before the event started at Boneyards. While Jack attracted every good wave to himself like a magnet, Yago couldn’t figure out the tricky lineup and was happy to go on close outs and insiders in search of backhand full roats and hangers. Heat Two of Round One and not much had changed from the Boneyards sesh; Yago “happy-on-an-insider” Dora. But with less than three minutes remaining, Yago found himself a full-sized Supertubes wave and proceeded to garnish that thing with the same backside hangers he’d been doing on those tiny Boneyards insiders. Deep bottom turns to critical and extremely precise off-the-lips. The trick with Supertubes on the backhand is to bang it critically without losing down-the-line momentum; your calculations need to be Einstein-like. And Yago’s were. If you want an exposé on how to surf Supertubes, queue up Round One, Heat Three of the 2022 Corona Open J-Bay. Fast forward to 8 minute and 30 seconds on the condensed heat replay, sit back and enjoy the masterclass. Moral of the story: practice makes perfect.

Heat Three of Round One and while alley-oop boy, Kolohe Andino kept on attempting full roat oops into the offshore wind (who tries alley-oops in the SW at J-Bay?) Thompson & Robinson got straight to work. Thompson’s curtain raiser on the Championship Tour stage was a 5.67. And from that point on, Luke didn’t look for a second out of place. Fresh off a duplet of fantastic results in Ballito and El Salvador, Luke’s Surfing was crisp, refined and powerful. I have this mate who would always rise to the occasion; whenever people doubted his abilities as a surfer it would annoy him so much that he’d surf beyond what he was capable of. The best he’d ever surf was within the constrains of the red & green lollipop when someone told him he sucked. The difference between my homie & Luke is that Luke is the occasion! His surfing is Championship Tour material and soon people will have to rise to beat him. Robinson took the heat but not without an arm wrestle with Luke. 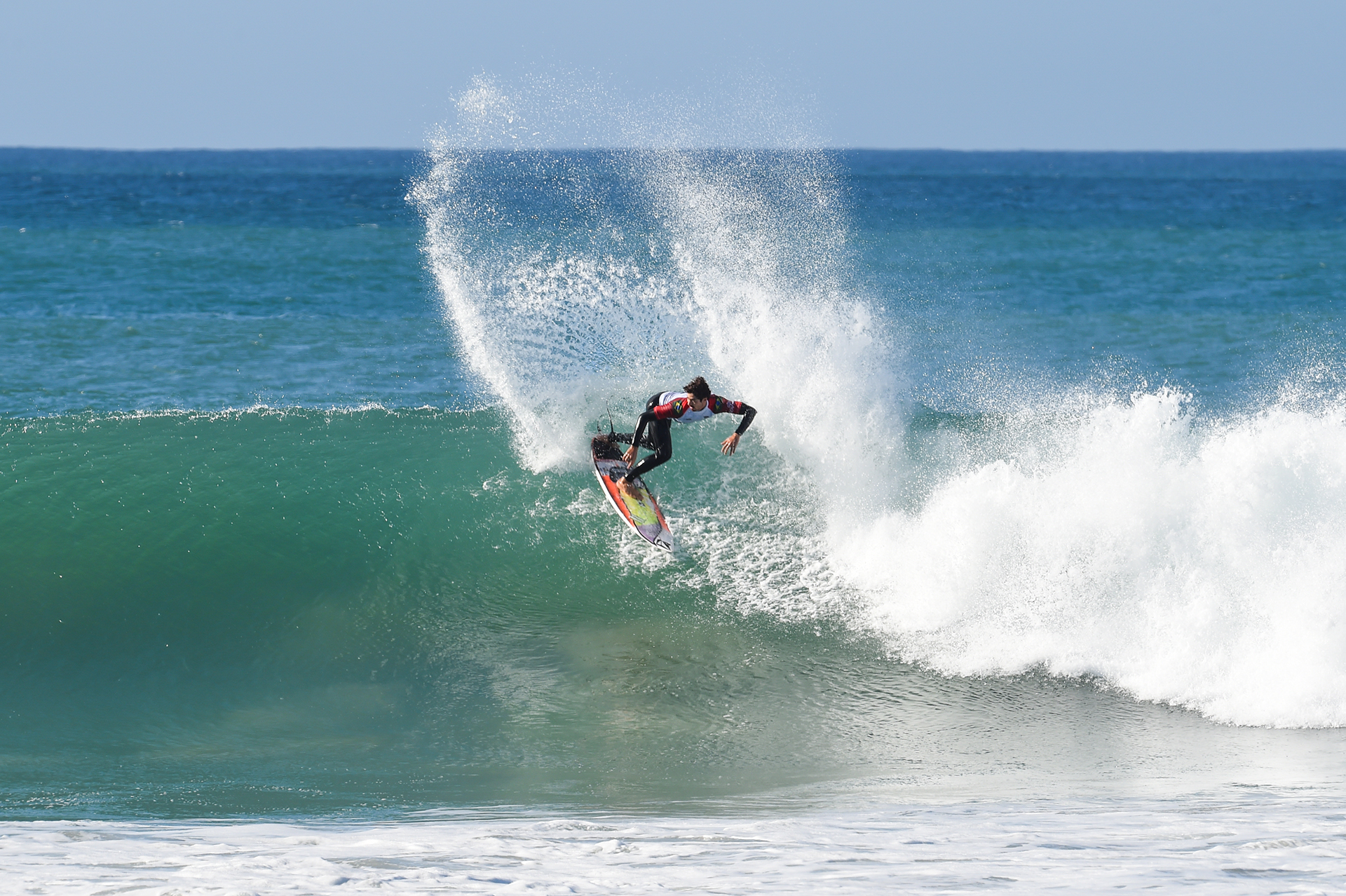 I’m subscribed to a Youtube channel called Economics Explained, where they endeavour to unpack the world’s economies. In one such video, Economics Explains analyses the economy of London and the UK. London is home to a disproportionate amount of family offices. An investment office with one uber rich client, generally old money. What does this old money desire from their family office? Stability above all else! Leave the high risk stock markets to the plebs over in Manhattan. The Pupo brothers are like those London family offices. Stability above all else! There are no big bangs or perfect heats, just fantastic decisions all day long. This was Sammy Pupies first performances at Supertubes and Sammy surfed J-Bay like he lives down the road. He chose great waves and laid down perfectly timed turns in all the right places. The Pupos aren’t Bitcoin investment kinda cats – they’re all about stable longterm growth. When you consistently make good decisions, chances are you’ll consistently get good results. Perhaps you should put a Pupo in your FS team? Just saying.

Once the mens heats had been completed we moved to the women’s elimination round. Heat Two of the elims featured da queen Stephanie Glimore. And Steph had found her rhythm after the Round One shocker. Some things are timeless, like a black suit or a Streetwise 2 from KFC. Would KFC be KFC if they didn’t have the Streetwise 2 on the menu? Certainly not. Gilmore and Supertubes is like KFC and the Streetwise 2. It’s just a combination you can’t argue with. Two delicious pieces of chicken deep-fried in the colonel’s special spices, complimented by a handful of chips. Come on baby! Anyway,

Steph lit up her second heat of the day. Ronnie Blakey was commentating and you could almost hear his voice cracking from the beauty emanating from Steph’s surfing.