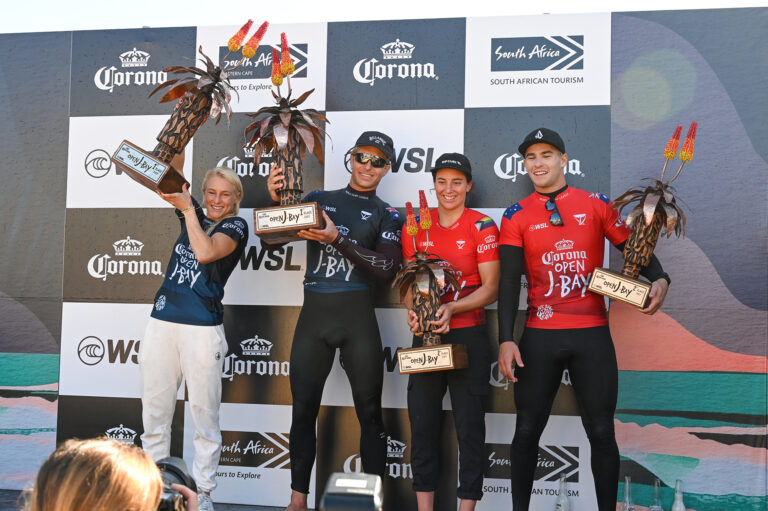 Before we could wipe the sleep from our eyes and debrief from last night’s set of weird dreams, Trav Logie was on screen, dressed head to toe in black, looking sharp and sexy, ready to make the call. He laid out the plan for the morning before I’d looked at my toothpaste and said we’d have champions crowned by 2pm before I’d put on my socks. We were off to a galloping start!

We got up and made our way to the contest site. Cars lined Da Game road from the Point parking lot all the way to the Checkers/Spar intersection. Every South African surfing family you know and their plethora of groms were frothing and on the beach. Corona in a laboratory exchanged for Corona in a bottle: people were out and about in a post-corona world (almost) enjoying the best surfing at the world’s best point break.

Here’s what got us frothed.

Here’s how we beached on Day Two of the Corona Open J-Bay. 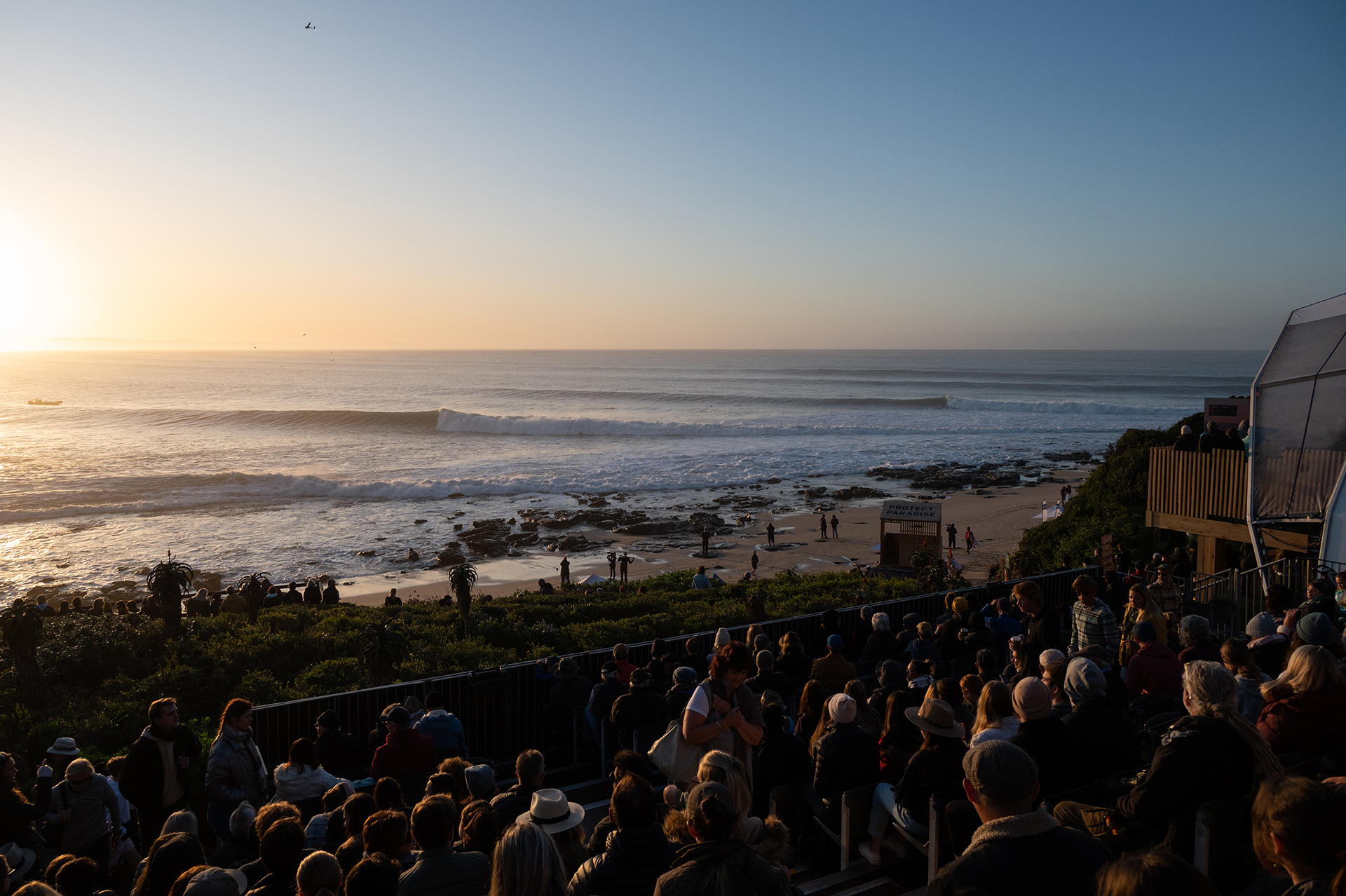 We’ve fallen in love. The Zigzag has fallen in love. Is it okay as a freelance Zag writer to speak for the greater team? Andy Davis can fire me. I don’t care. WE LOVE YAGO! When we saw Yago surfing Boneyards the Saturday before the event, we must admit, impressed wasn’t a word we’d used to describe our emotions towards his performance. Yago’s surfing at this year’s J-Bay Open was groundbreaking. And (we presume) it was that 8.67 that gave him the internal belief that ‘yes I can take out the best of the best at Supertubes’. It reminded us of 2014, when Matt Wilkinson had an absolutely breakout performance at J-Bay to acquire a third place result. He garnished Supertubes with backhand cracks we’d never seen before at the famed righthand point break. Every turn on edge. Top to bottom from start to finish.

In his quarterfinal heat against Conner O, Yago did two of the gnarliest backhand hooks we’d seen all contest long. The wave stood up and gurgled over impossibles, it was deadly, a beastly section, like a Satanic monster out of ‘Stranger Things’ and Yago, unfazed, uppercut that thing twice like Gandalf the Great. In his semifinal heat Yago acquired an 8.70 for surgeon like backhand surfing and a super high-risk air reverse. There are not many goofy foot surfers who rise to win/do well at J-bay but this year Yago flew the flag for all the goofies who aspire to surf Supertubes well. 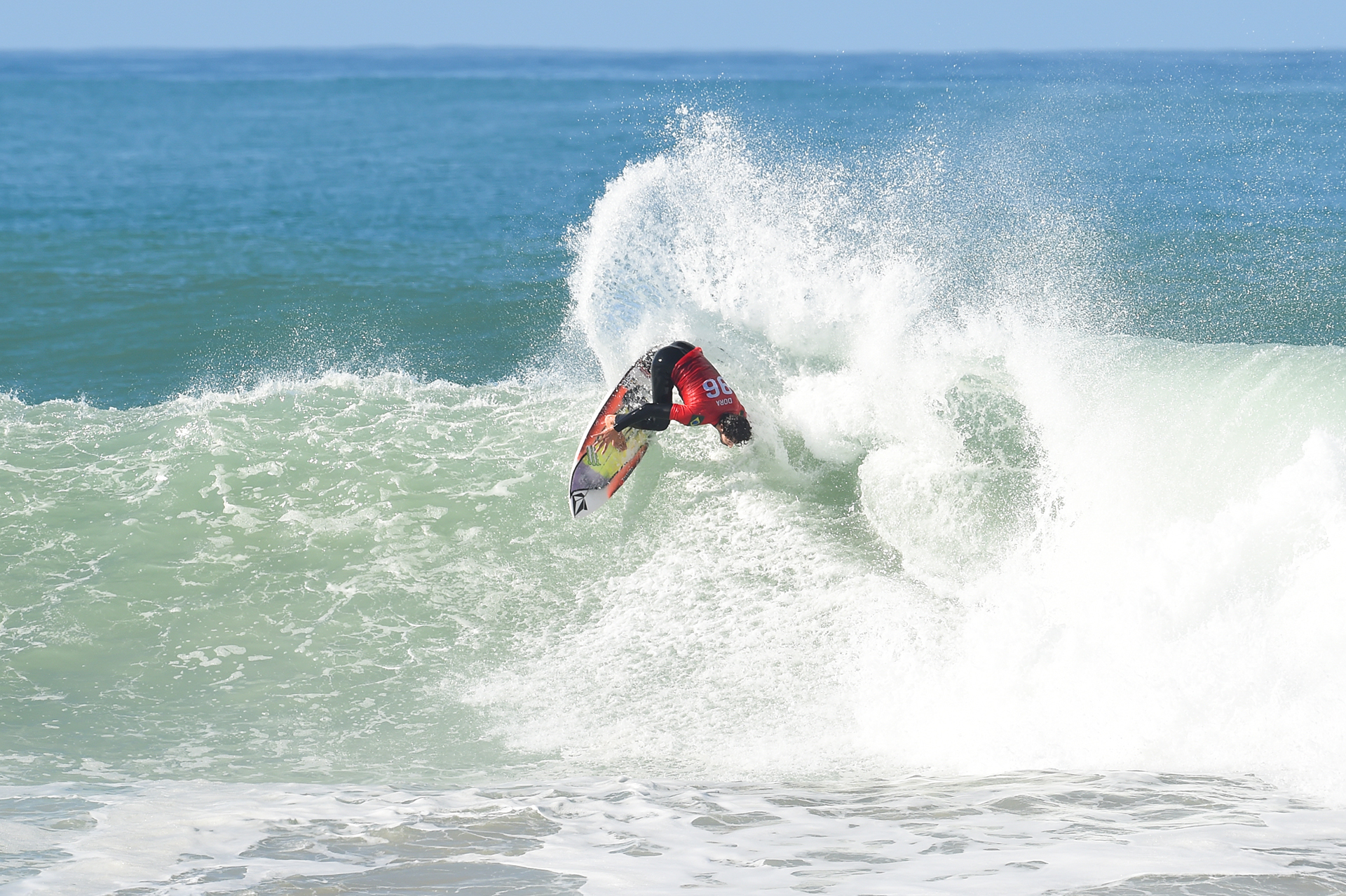 For Jordy We Weep

It’s an emotional affair watching Jords surf. Our expectations of him are lofty, so when he loses a heat prematurely, it feels like you’ve just failed your driver’s licence for the third time in a row. I once heard this story of a guy who was travelling via the USA to compete at some longboarding event in Mexico. He had everything in order; cash in the bank, enrolled in college, flights booked, accommodation arranged etc but yet the boys at the embassy denied him access. I had another homie, no cash, no job, no accommodation yet the US gave him a multiple entry 10 year visa. The point is you can do everything you need to win but ultimately fate decides. In quarterfinal one Jordy had everything he needed to eliminate Ethan. He was on a tear in the heats prior, the waves were slowish with open faces (just up Jords alley) and Ethan could barely put a score on the board. Yet Jords made more errors than Zuma reading out any number over a thousand. He was in the wrong place, he took the wrong waves and did turns when he should’ve high-lined. It was rough to watch. And to make matter worse, Tyler sat right where he sat in the very next heat and lucked into a couple bangers. If I have to carry on writing about this I might start crying, so we’ll have to end it here. Full stop. 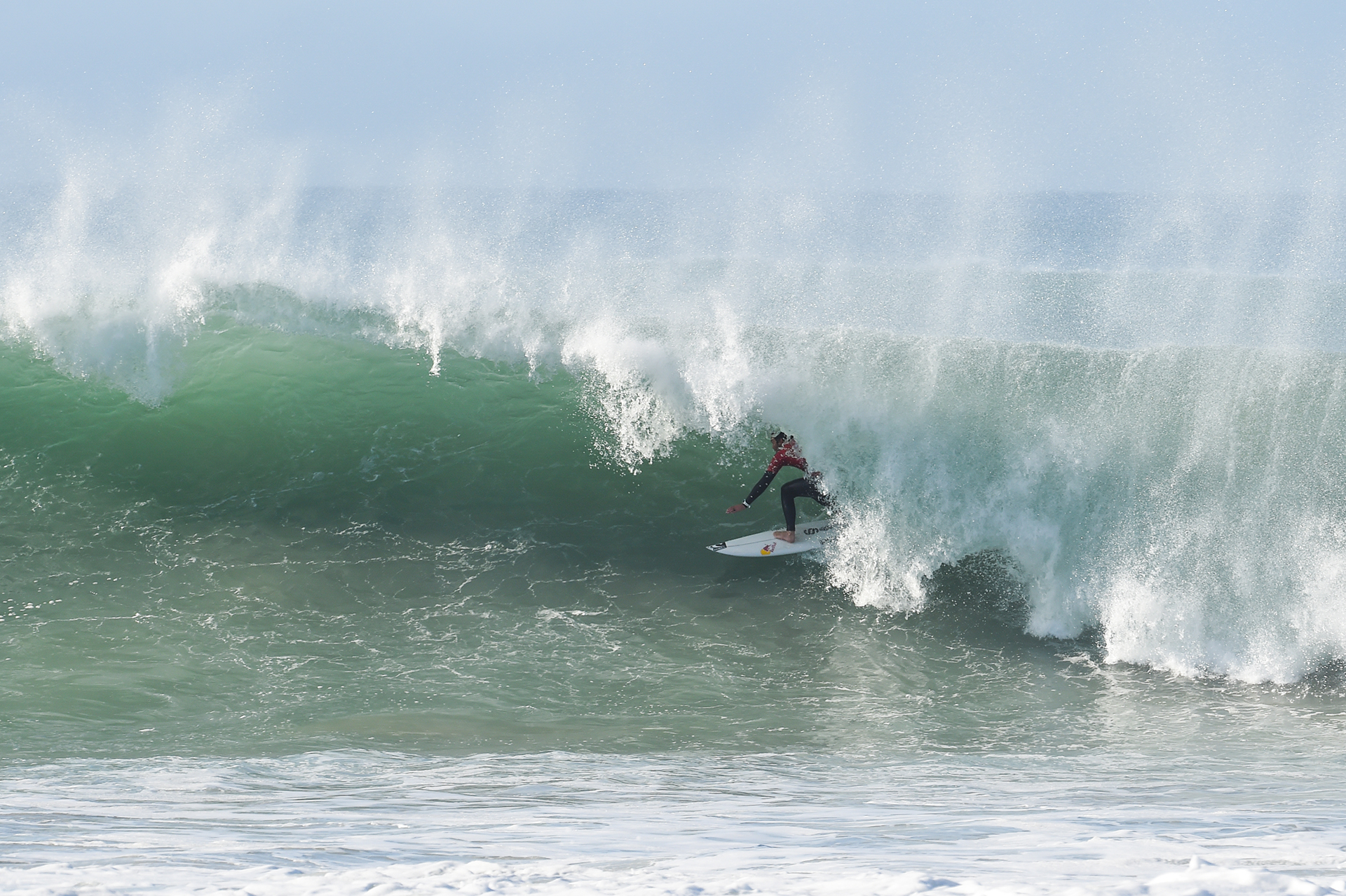 We have this card game we play with our family called Red Kings. It’s a fast-moving game that is strategic and involves memory. The problem is that certain members of the family love to cheat, so you have to keep a close eye on their dealings. As a result not only are you focusing on your own game but also on theirs – policing the pack of cards to make sure an ace doesn’t go somewhere it shouldn’t. Surfing a heat with Tati is like playing cards with my family – you gotta (as they say in Indonesia) Hati-hati…or “Watch out!”

With Tati you gotta keep a close eye on her for two reasons; one, because she might pull a fast one on you with priority, like she did with Sage in Mexico or Riss today and two, because Hati-hati, Tati-tati has a top-shelf backhand attack. You know on Youtube when you come across an MMA video and you get a dirty fighter. A fighter that wants to get all up in your grill and swear at you and take it to the ground for a good old sweaty close and personal wrestle – that’s like Tati. She gets dirty. Explores the outer fringes of morality. But her backhand attack holds fast to the truth. It’s refined, powerful and high-risk. Where the other female athletes rely on flow and power to get through heats, Tati takes big risks. She surfs tight and cracks the lip where it counts.

In her final heat not only did she out-surf Tyler Wright but she also played a superior tactical game, keeping Tyler Wright off (almost) every good wave that came through. Isn’t it nice to see someone who surfs high-risk to win an event? It’s like the world is as it should be. 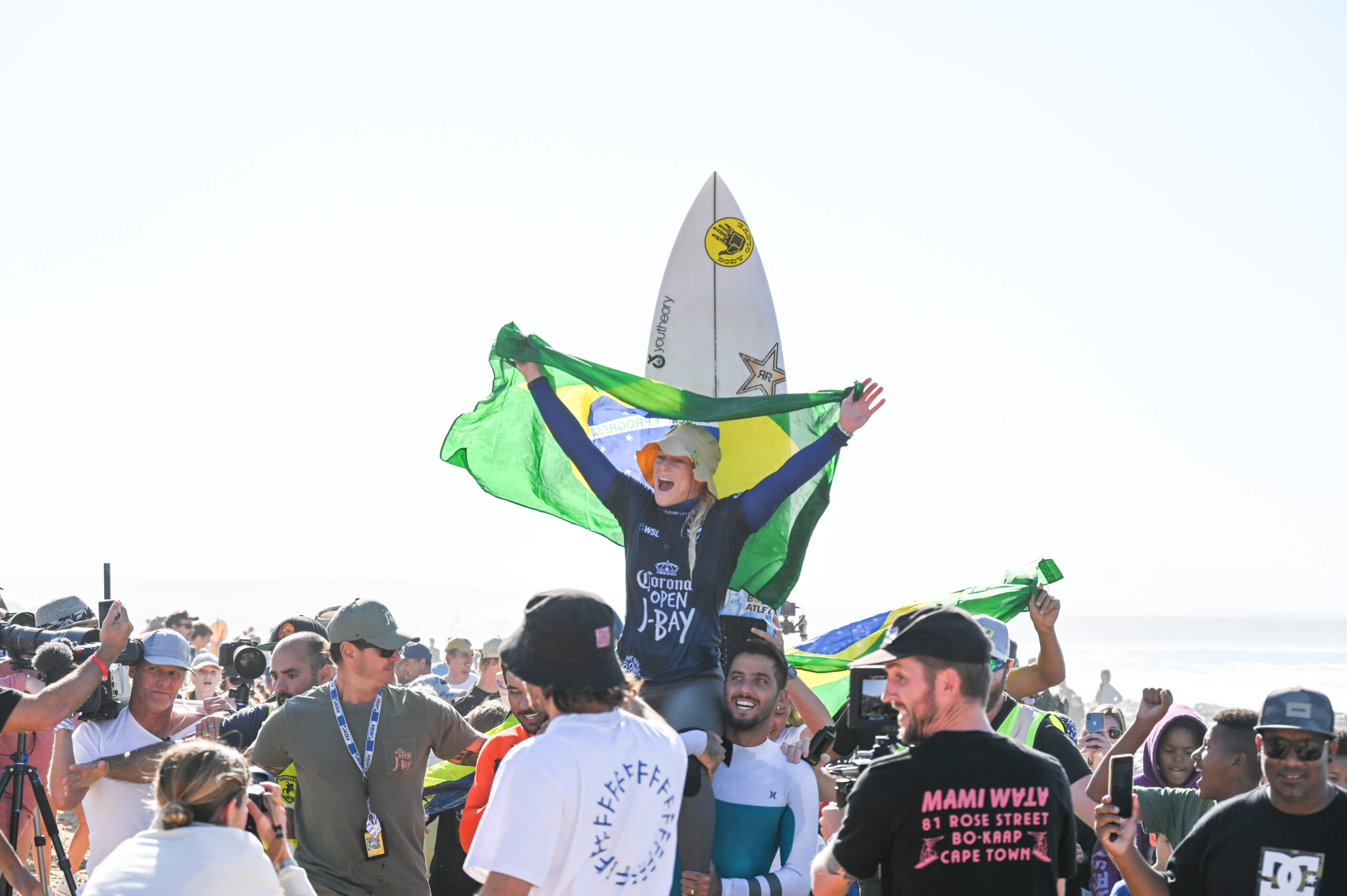 Is there anyone on this planet right now who surfs J-Bay as flawlessly as Ethan Ewing? From the first time we witnessed Ethan Ewing surf we knew – everyone knew – that one day Ethan Ewing was going to blow minds at Supertubes. It’s like when you know a girl and a guy that don’t know each other. Yet you just know deep in your soul, that these two could be lovers. That they could be lovers who marry and have two kids and buy a little town house in a security complex deep in the suburbs and grow old together. Their kids will one day bury them and reminisce on how beautiful their love was. That’s how we feel about Ethan and J-Bay. He’s the curry to our rice. The avo to our toast. He’s the (dare I say) the lime to our ‘rona. He’s Mr. Perfect.

Ethan grew into his relationship with Supertubes as the event progressed. Until the quarterfinals, Ethan’s highest score was a 7.93. Nothing to gasp about there. But it was from the Semifinals that Ethan’s relationship with Supertubes began to blossom from a fling into the kinda relationship where both partners openly say, ‘I love you.’ (which is like marriage in gen-TikTok). Ethan showcased his superior flow, his precision-like rail work, his power and explosiveness out of the lip en route to his maiden CT victory.

There are certain surfers who become Supertubes specialists. Their style, their approach, the lines they draw; we think of Parko, Jordy, Occy, guys who have a special relationship with the place. It’s safe to say that Ethan’s on his way to becoming a Supertubes specialist.