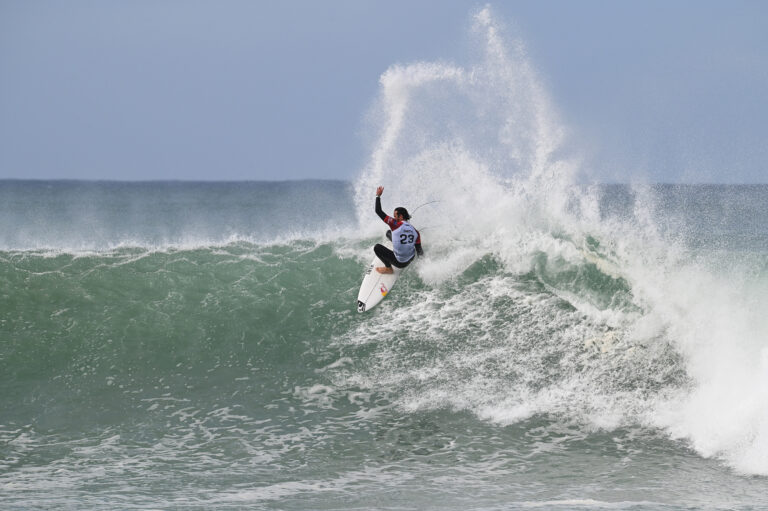 The forecast had been screaming about this day, the 14th of July for close to two weeks. 5-6 metres of perfectly directed goodness. A day for the ages, the kinda day that makes every South African surfer from Durban to Cape Town log in some leave time, call up African Perf to book a sea-facing room with a view and turn a blind eye to the ever-rising fuel prices. Yep, it was that kinda day. A day to get the WSL dream tour back on track. Viewership up! And a couple more thousand playas subjected to Haviannas ‘Welcome to the way we beach.’

Here’s how we beached on Day Two of the Corona Open J-Bay. 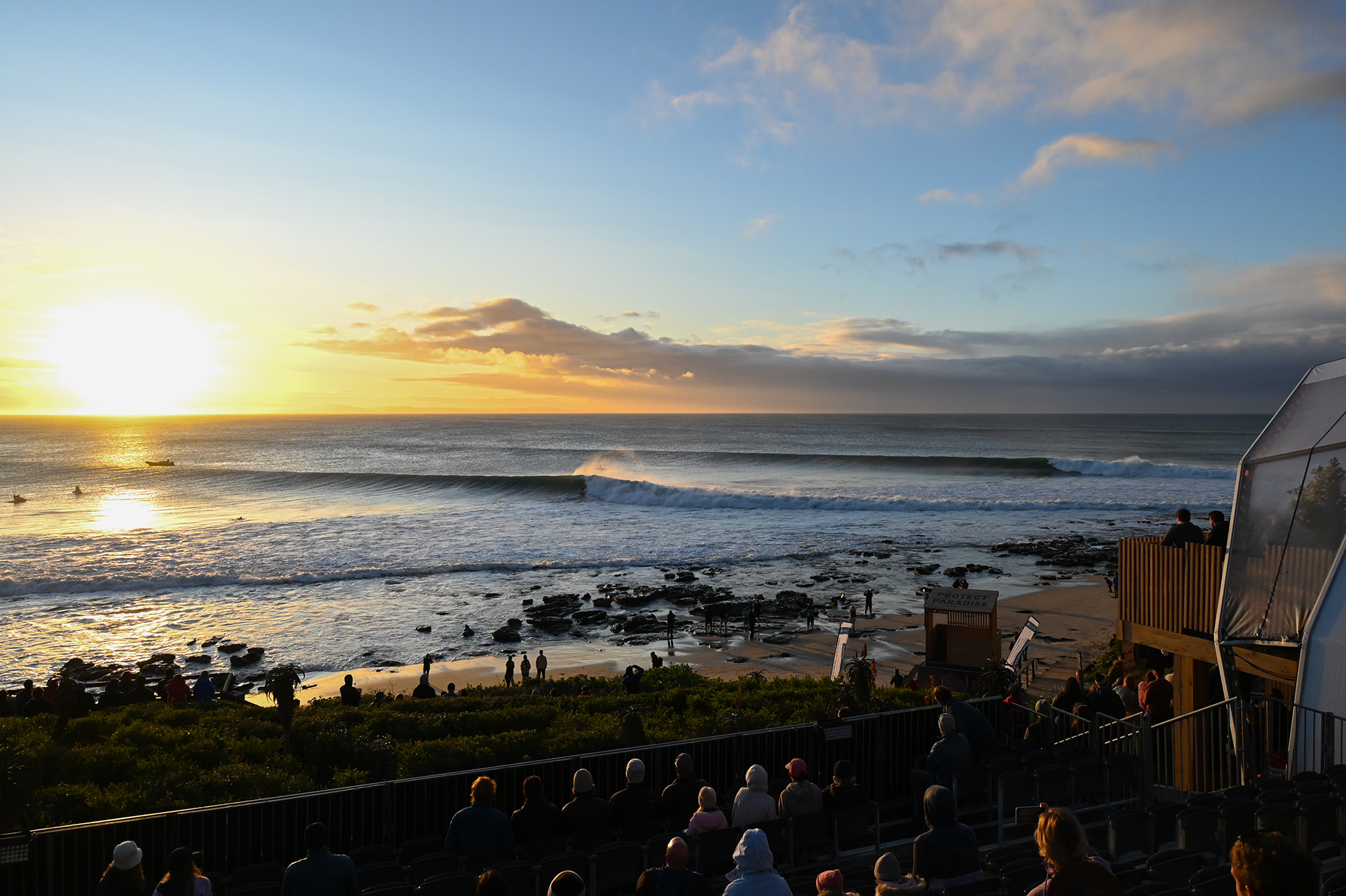 The first half of the morning was a wobbly affair. The swell we’d all been waiting for, perhaps a touch too big, causing waves to swing wide and bend out to sea. A bit of a cutback festival peppered with one or two barrels through the Impossibles section. Before 9am we’d lost two South Africans. Joshe unfortunately couldn’t find his feet over the 48 minute heat, falling all over the place and young Mr Luke Thompson was out-played by the 2019 World Champ the Italian Ferrari. The dark rain-filled clouds continued to loom overhead as we waited for someone to rise to the challenge of this tricky, lumpy Supertubes line up. And that figurehead came in the form of Griffin Colapinto.

Griffin fell victim to a rampaging Matty Mc G yesterday, the judges inclined towards McG’s more vertical approach. But today was a different story. With less lip and more open face, Griff garnished his waves with Parko inspired rail carves. Watching Griff surf was like eating a rich, sugar saturated malva pudding made by that auntie that likes to feed people. Take one bite and you’re on a sugar high for the rest of the day. Simply the sight of a Bar One in the Checkers checkout aisle would make you feel ill. 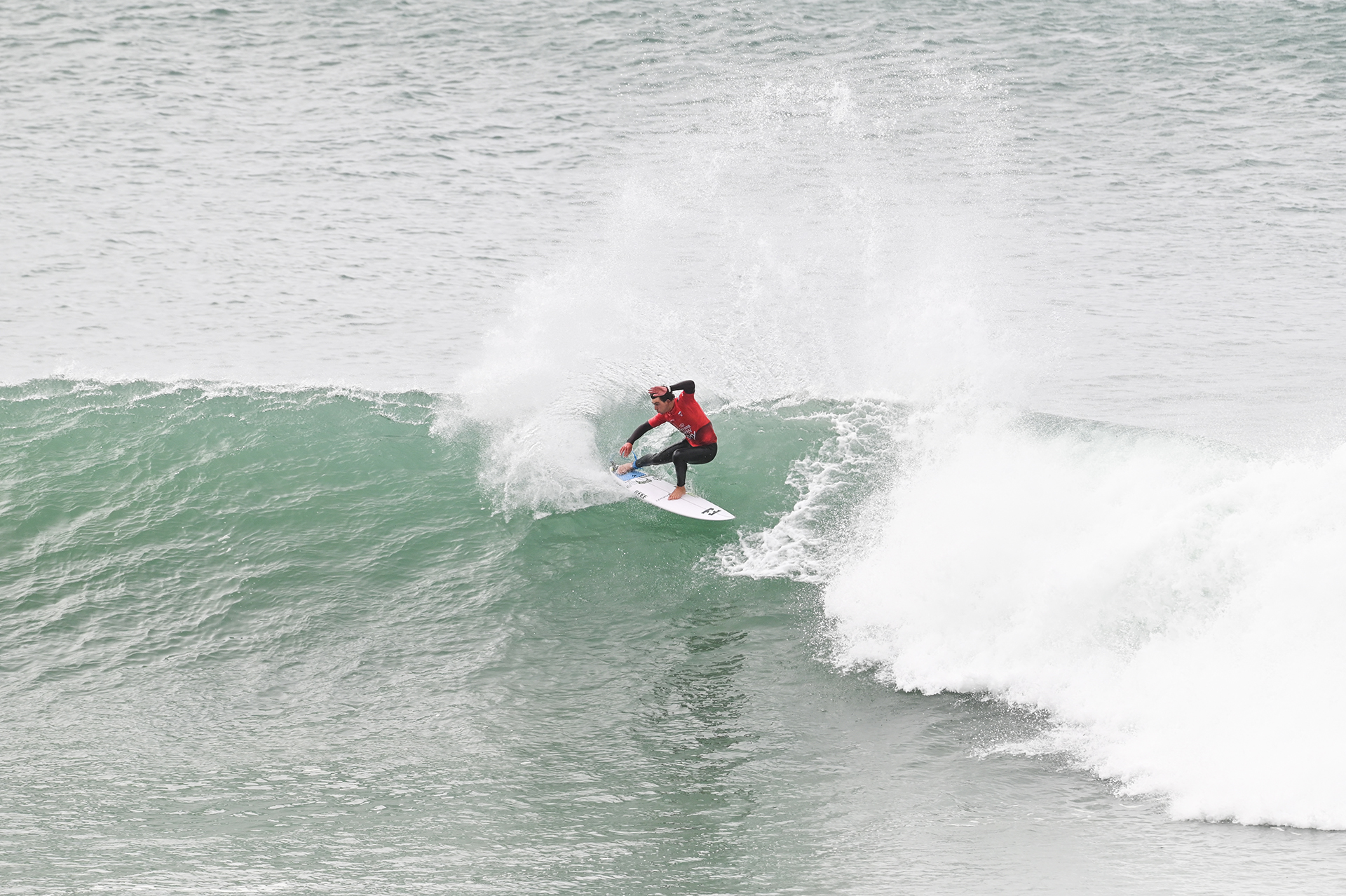 Don’t Rush Me / Jordy Smith is Back!

Yesterday Jordy looked a touch slow. Those nuggety down-the-line conditions didn’t quite suit his big frame, but the slow rolling waves offered by Superstubes today were right up his alley. A match made in heaven. Jordy timed his turns to perfection. Some J-Bay locals have a sticker on their cars that say, ‘I’m a Local – Don’t Rush Me.’ or something to that effect. Today it felt like Jordy had that sticker on his surfboard.

His new house overlooking Tubes just completed, Jordy was un-rushed by the screaming crowd. He picked his sections and manoeuvres perfectly and let his power hacks do the talking. The judges heard the words emanating from those power hacks and issued Mr. Smith a duo of eight point rides.

In Jordy’s Round of 16 heat he came up against a scintillating Griffin Colapinto. Two names you’d expect in a final. But Jordy was an iron man. Jordy caught 6 waves to Griffin’s 14. On his 9.07 he acquired one of the barrels of the event: a lengthy water filled drainer, he navigated that thing like a pizza delivery man before Google Maps. Riding blind. This is his town and he knows the name of every street and the exit to every barrel. How good is it to see Jordy make a couple heats!? It’s like double-liming your cold Corona. 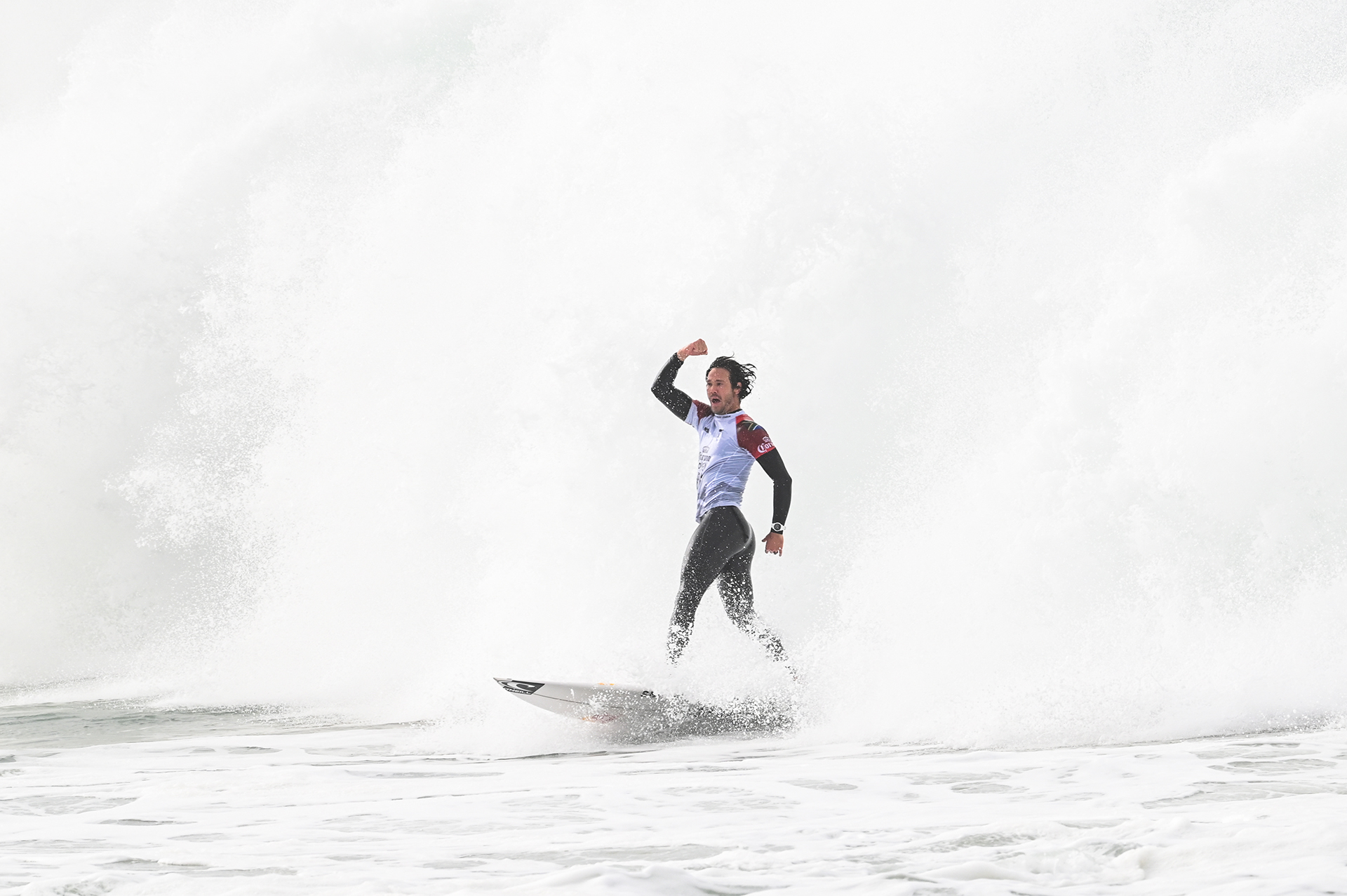 Some unions are innate. Like Batman and Robin or peanut butter and jam. But some more unexpected, like when the DA and ANC opt for a coalition government. You’re like…wait, what? Didn’t John Steenhuisen spend the last 13 speeches humiliating ANC leadership? Now they’re mates? How does that work? Only the Lord knows when it comes to politics. Anyway, when you think of Yago you don’t think J-bay. You think beach break. Or maybe a soft rippable point break left in the Maldives. But over the last two days Yago has put on a backhand surfing clinic. He’s gone from ‘insider guy’ to giant killer. Yago’s surfing is smooth, powerful and precise. He has shades of Kalani Robb; that cocked-back knee and light-footed approach. Where some of the other goofy foot hopefuls were overcooking turns Yago choose the perfect temp for each lip hanger. Yago clocked a 9.5 to send one of the favourites to win the event, Filipe Toledo, back to Cali. 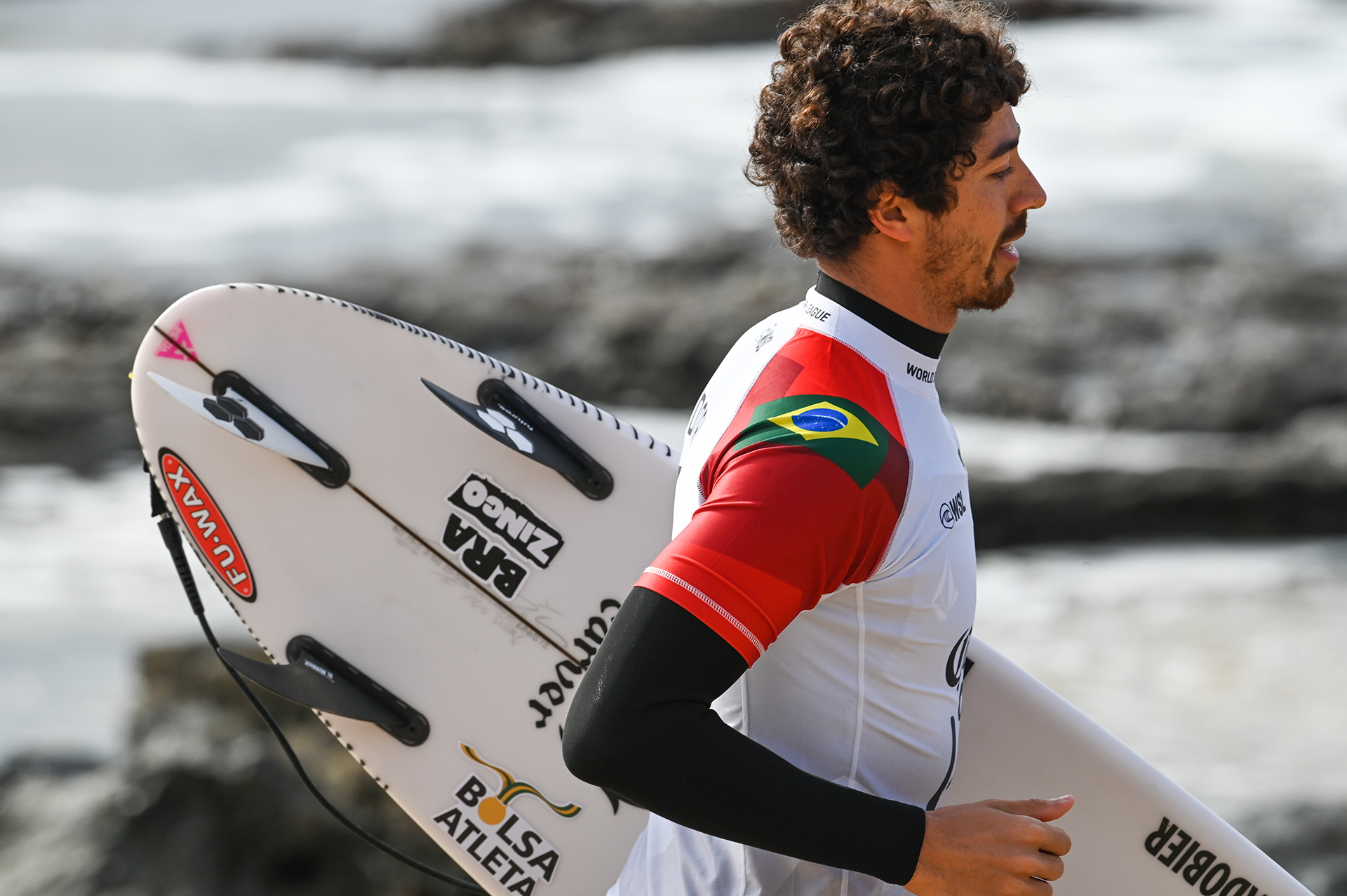 We love how honest Steph is in her post heat interviews. Her honesty is refreshing. On a tour where everyone seems to say the same thing in their post heat interview i.e.; “I’m taking it one heat at a time” or “I’m not really thinking about the next event” how lovely is it to have someone ‘man up’ and say it how it is. The unadulterated truth. Yesterday in her post heat interview, when Rosie asked if the final five was factoring into her head space or if she’s taking it heat by heat, she said, “It’s consuming my head space to be honest” – where most would’ve said “I’m taking it heat by heat” or dropped another cliché – Steph was honest. And it was like a refreshing breeze in the Karoo desert. We feel like Stephs honesty shows in her surfing. She’s honest about her strengths and weaknesses and she knows how to use her strengths to make it through heats. Today Steph drew some of the most gorgeous rail carves combined with beautiful barrel riding to make the semifinals. Do you want to surf Supertubes well? Draw good lines? Carve in the right place? Slow down when it barrels? Hit up the Steph vs Gabriela heat replay.